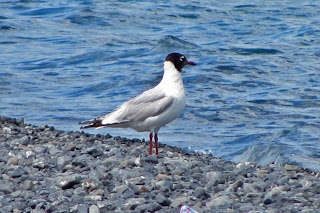 This superb Relict Gull is what met me soon after I got up this morning, but not from the bedroom window unfortunately. The small numbers in the world are confined to such countries as China, Mongolia, South Korea and like this one Kazakhstan. I received this image from Doctor Svetlana Ashby who, regular readers may remember, said she would investigate their status at traditional sites. Her friend in Kazakhstan has been keeping her posted, but the news doesn't seem good as this was the only one recorded on a recent bird trip. It was said to be confiding but guess that isn't unusual given in general they rarely see human beings. My interest is to continue, and hopefully complete, my age old ambition to see all 54 of the Gull species in the world. I have just 3 to complete the set if you like, This one, Yellow-footed Gull (found mainly in north west Mexico / California Baja) and Red-legged Kittiwake which will require a visit to the Pribilof Islands located between Alaska and Russia.

Thank you very much Svet for this help, I'll certainly be giving this trip more than a passing thought next spring. If you are interested in such a venture log on to kazakhstan bird tours.

Later in the morning I had a wander around, with weather set fair but birds thin on the ground. Ferry Bridge produced a handful of Dunlin, c3 Sanderling, a juvenile Yellow-legged Gull plus c2 Mediterranean Gulls. With just a single Chiffchaff in the notebook by the time I reached the seaward end of Barleycrates Lane, it was good to look back to see well over 100 House Martins congregating on the cliff edge flats. There were a few Sand Martins and Swallows passing overhead, but the most interesting aspect of the walk thus far was the construction work going on at 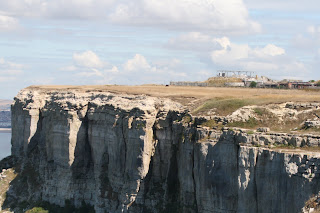 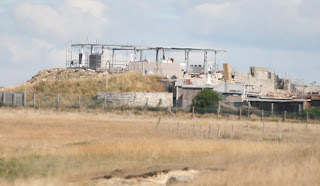 Looks like it might be a Mediterranean style hotel, but Martin Cade (Warden PBO) did suggest there had been some interest from a TV station to make a programme about upmarket gevelopement? 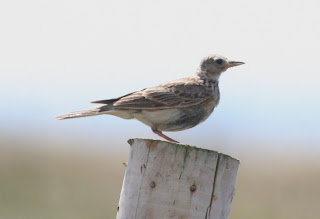 This Skylark was so obliging it seemed to be saying "please take a shot", but a little further on awaited the bird of the day. From the thigh high grass a Grasshopper Warbler popped up a flew to a nearby hedge where I was able just to catch a couple of fleeting glimpses. 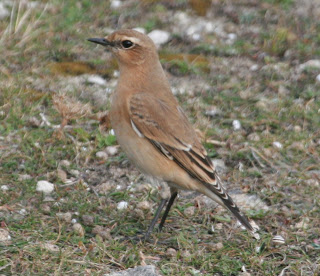 In addition there were c2 Wheatears all of which points to a start in the migration south for some early leavers. 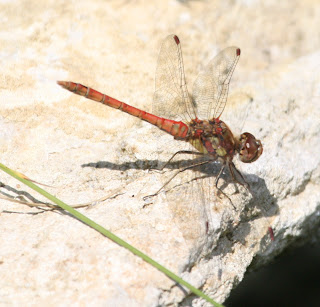 At the Observatory Martin pointed out Common Darter a new arrival / emergance since my last visit. 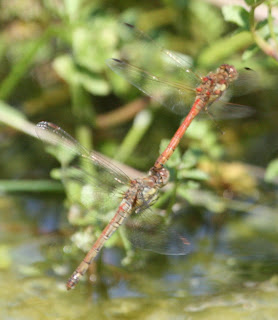 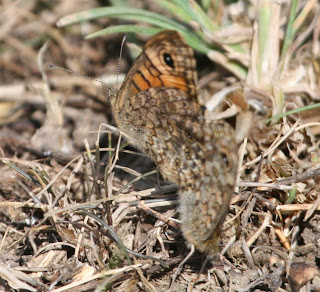 as this pair of Wall Butterflies (my first record this year) were doing similarly. 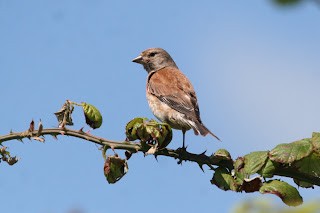 Finally, this Linnet one of good numbers this year was seen with a 'charm' of Goldfinches.

Returning to the Findings of my meeting with the RSPB

Time was running out as John Snellin had to be elsewhere, so I asked if I could "touch briefly on the Great Fire of Radipole". This brought a litle chuckle from all 3, but Dante looked as though he'd rather the subject not be broached. I asked him if he had made his own investigations, to which he said he had. Further, do the RSPB have a proper system of 'risk assesment' in place and was one completed before the burning operation took place? Yes was the reply on both counts. I then asked him how he would describle the weather conditions on that day, and he replied with the single word 'blustery'. To make it quite clear, tthis is he dictionary definition; "a strong wind - gale [c15: probably from Middle Low German 'blusteren' to storm, blow violently]. So, if this was the assesment of the RSPB Dorset Manager, then surely the Reserve Manager's should be somewhere close to this? From my own limited , but very close experience of this particular document, over 20 years on a North Sea Oil Platform, it is a Heath and Safety Executive requirement that copies be retained for a given number of years. As Dante stated from the onset, this meeting was called, in part, to show the Societies 'transparncy' so maybe he can send a copy for both past and present RSPB supporters to view, in company with the other answers he has promised to send to me? Either way, even considering the wind conditions to be 'blustery' someone was allowed into a tinder dry reed-bed on a Site of Special Scientific Interest with a box of matches - it beggers belief!

In addition, he went on to say that both the Fire Service and Police Force had been informed of the RSPB intent to start a fire in the reed-bed, both giving their blessing. I find this a little hard to believe, but it's not impossible, but this agreement should be noted (logged) somewhere which I intend to investigate in the near future. It may also be of interest to note that the Dorset Echo report a couple of days later quotes Nick Tomlinson as saying "the fire was caused by a 'freak' gust of wind".

And finally, I asked Dante about the timing of the build of the Sand Martin Wall which it transpired wasn't as Nick Tomlinson told me in my home "all his decision" which in my view further tarnishes his reputation. He did however say that he had undertaken a survey, but I am at a loss as to know how anybody can say with conviction that no birds were nesting (or prospecting) the area around the build site. I have asked Dante to write and explain what survey proceedure or technique was used. It was also daunting that the members present were only concerned with birds actually 'nesting' as this is the letter of the law as far as the 1981 Wildlife and Countryside Act goes, but surely their skills in wildlife management would extend concerns to any creature prospecting that area at that sensative time of year.

I know I said finally, but do have to reveil that Dante also admitted to me (and the others present) that he has put an embargo on any local RSPB staff talking to me, or as he put it "engaging" with me. I feel sure somebodies rights are being infringed here, whether that be mine, those of his staff or both but certainly another area worth looking into?
Posted by Bagsy at 18:03