Bird In The Hand - Ice Cube

The early morning 'Mackerel' sky and unseasonable chilly wind quickly gave way to the bright sunshine as the day wore on and even before leaving the house I was in for a treat or two. A neighbour had given me a Yucca plant some time ago, and while that is doing very well the 'self set' Buddleia that has grown beside it is outstripping it in size. I had attempted to pull it up but very pleased not to have had the strength as there on the path was this fine 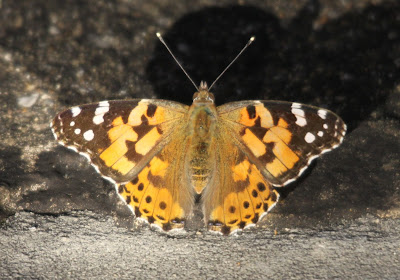 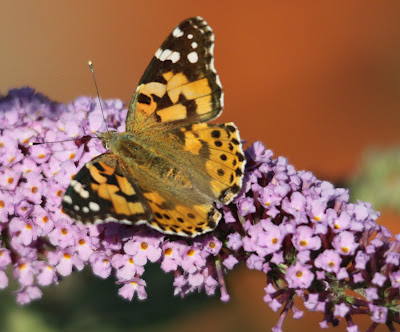 which quickly decided that the blooms would be far favourable than the concrete. Racing indoors to collect both camera and binoculars I returned to hear something of an unusual 'chirruping' from above 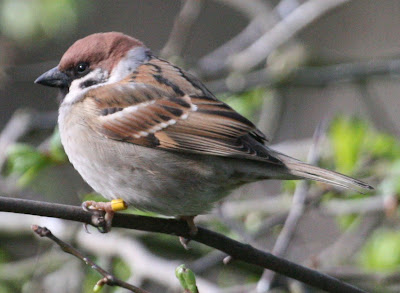 recognisable as a TREE SPARROW. The bird was in fact seen but would have been of no use had it remained mute, so what is an excellent record in Dorset these days was immediately entered in the log. Archive photo. In the cemetery there was a family party of Coal Tit, confirming breeding there this year, along with more Insects than probably the total seen during the rest of the year? 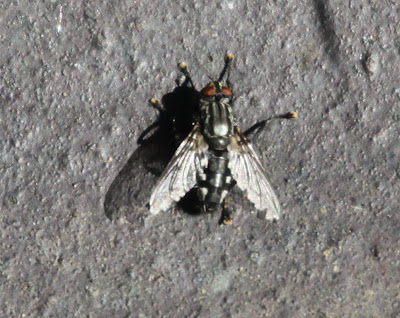 Diptera, the FLIES, is not a subject I'm at all familiar with although they intrigue me, so consulting the Field Guide this specimen is thought to be Sarcophaga carnaria, sounds a bit too technical to me! 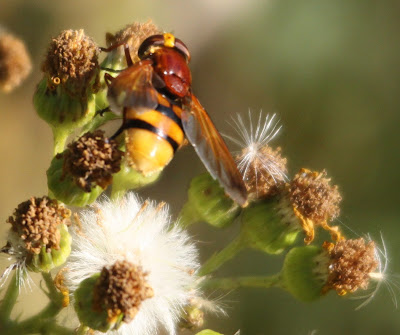 This would appear to be the Hoverfly Volucella inanis 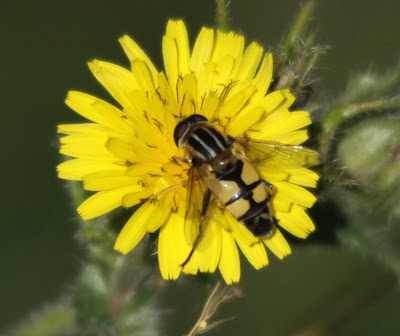 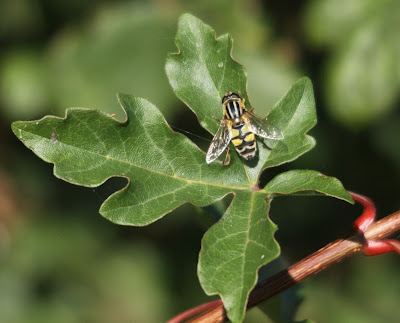 This appears to be the same Insect but is posted more for 'artistic content' due to the leaf. The 'full moon' is upon us at present, making for and early (07:00) high tide so directly to Portland Bill on the bus rather than Ferry Bridge. Ain't it always the way, as from the bus window I spotted what for me at least was the first 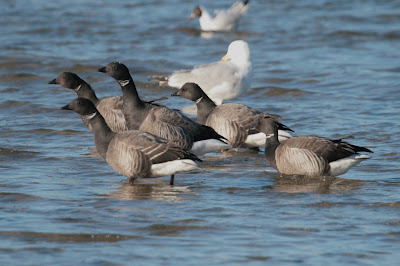 BRENT GOOSE of the year and the first I have ever seen in the month of August - only just! Archive photo.
There was certainly some action at the Bill as within minutes a good number of Hirundines were recorded, mostly Swallows but at least 6 Sand Martins along with a couple of House Martins. Around Pulpit Rock and the Common Wheatears too were in good numbers as were Pied Wagtail and Rock Pipits both of which seemed to be favouring the rock ledges. 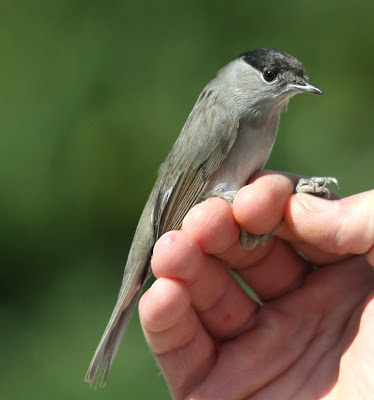 At the Bird Observatory there was news of a Nightjar which had been seen twice, but for me there was the pleasure of the first returning BLACKCAP of the Autumn, a male, 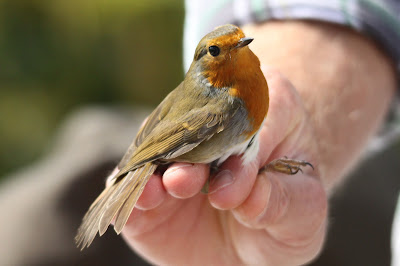 and this ROBIN. With little in the Moth Traps to keep me Culverwell was to be the next stop as that was the direction the Nightjar was last seen flying. 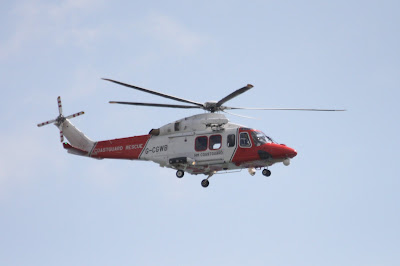 The COASTGUARD HELICOPTER passed low overhead as I reached the bushes, but there was no sign of the target bird. Instead I got lucky with 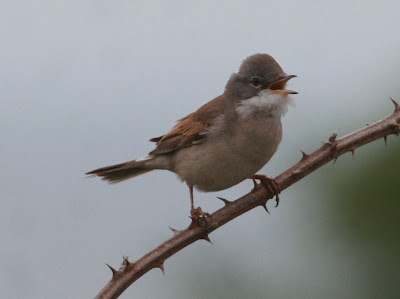 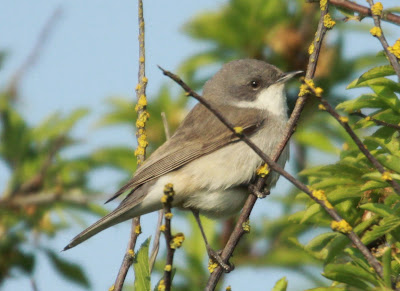 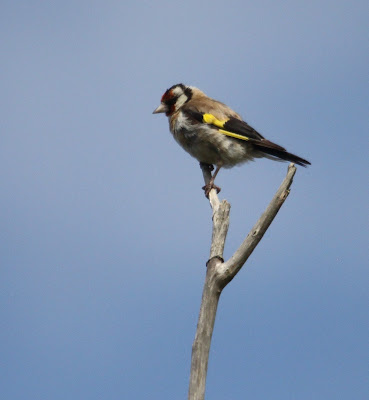 lots of GOLDFINCH, a few Greenfinch 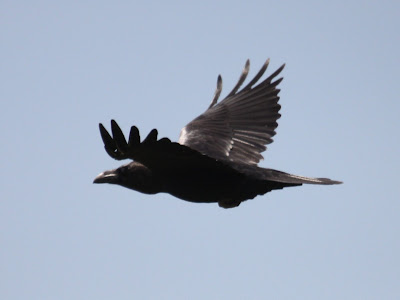 and a single RAVEN. The Whitethroat photos are from the archive for illustration. There was to be a final bonus before I left for home, by was of a Grasshopper Warbler which, bearing no 'ring' was not the one caught at the Obs earlier in the day. 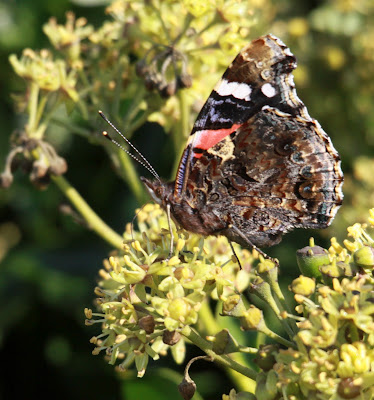 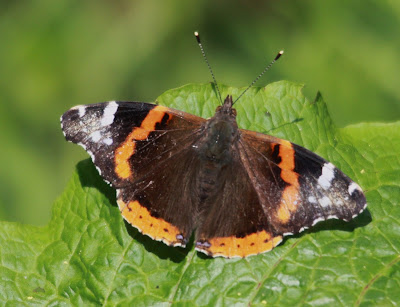 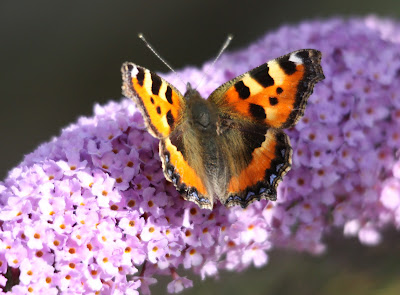 c8 SMALL TORTOISESHELLS - makes me glad I didn't pull it up!
Posted by Bagsy at 18:23