Another atrocious night weather wise resulting in much of the day being spent indoors. Outside of that there was another chicken to be put down, a late pick up at the airport (giving the returning travellers a chance to return to normal this side of the pond) and an addition to the Parley Moth List. Even though the 'trap' has been returned to Weymouth, there perched on a window this morning was 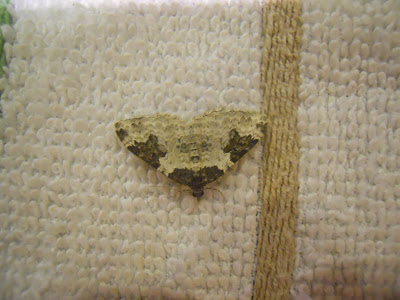 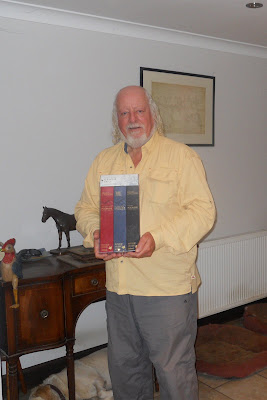 ﻿
If indeed a 'thank you' gift were needed, then what better than this ICEWINE TRIO a division of the subject I have never tasted let alone 'owned' so the acceptance from the Family Dampney was gracious. On a par with Sauternes, I know that the fruits have to be effected by the correct degree of fungus commonly know as Noble Rot (Botrytis cinerea), cold temperatures are critical and in many cases each berry is picked individually by hand. Hence a little more investigation into this wine which, prior to the gift, was only a name to me. 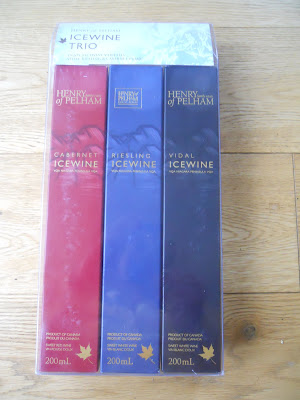 One bottle of each grape Cabernet - Riesling - Vidal﻿
Niagara’s seasons are very delineated. Summer is warm and autumn is cool followed by a quick shift to winter’s cold; these are the perfect conditions for producing Icewine and Late Harvest wines. When winter arrives the berries are typically harvested at night when they are frozen at -8º C (minimum) and when they are at least 36 Brix (% sugar).
Site and grape variety matter here. Vidal is both delicious and a sturdy variety of grape but Cabernet Franc and Riesling are the most elegant. The Short Hills Bench is uniquely situated 7Km south of Lake Ontario, further away from the moderating effect of the water. This means that the minimum condition (-8º C) arrives more consistently than elsewhere in Niagara, allowing for more opportunities to pick, often earlier. Consequently we are able to produce all three major varieties of Icewine, including the fickle Cabernet Franc and Riesling, with great quality and consistency. 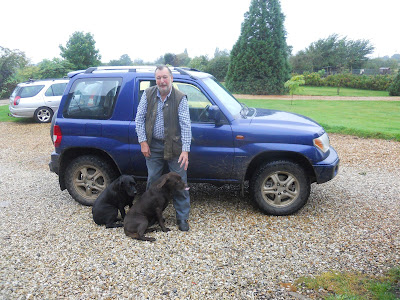 First on the scene was Mousey, the Game Keeper, complete with another gift of a dozen Wood Pigeons ready for the oven, he's assured none will be wasted! After dealing with the Chicken, it was off to the pond to check out the ﻿ 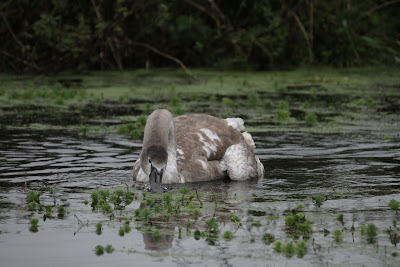 injured MUTE SWAN which can be seen feeding well but seemingly shunned by the rest of the family group.﻿ 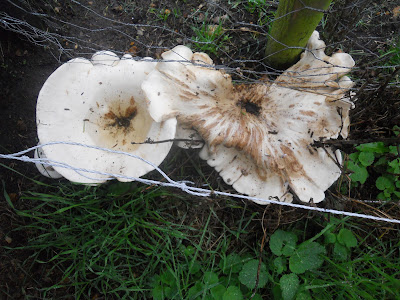 Along with all the rain and milder conditions comes lots of Fungi, and while I know little of their names these specimens were the size of dinner plates.﻿ 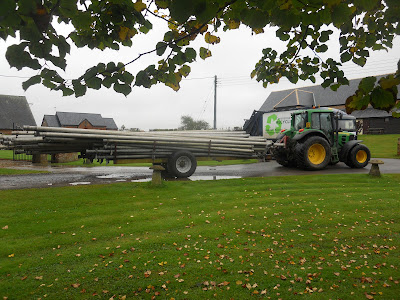 Certainly no need for irrigation pipes, so Jacko is busily stowing them away for a time when the sun shines again!!﻿ 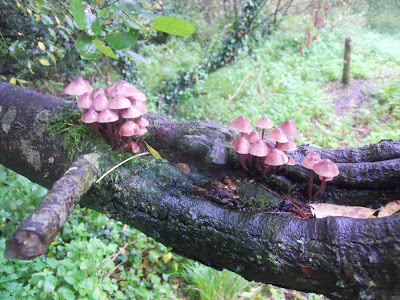 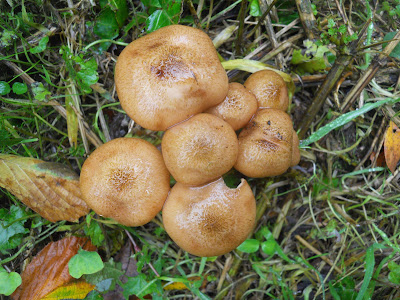 The rain stopped long enough to enjoy a fairly long walk, but attracted by the 'calls' of small birds within the Sallow coppice at the rear of the Manor House, I lingered for almost an hour. On the ground there were a variety of FUNGI, but my attention was more concentrated on﻿ 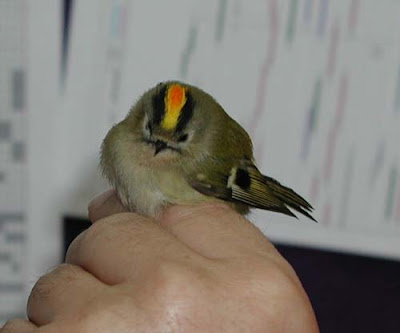 a continuous succession of high pitched calls, which I am still lucky enough to be able to hear clearly, and soon onto a number of GOLDCREST which probably amounted to a couple of dozen or so. 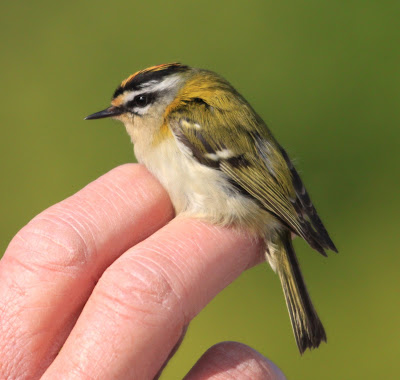 To my knowledge only one FIRECREST has ever been recorded on the property, with today's sighting being in exactly the same place as the previous one, but there was another 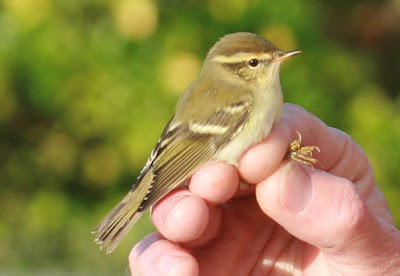 With the calls of what were c3 YELLOW-BROWED WARBLERs at Sweethill just 2 days ago, still ringing in my ears I felt sure, even though it were not seen, that one was present here today. The 3 images above, all taken at the Portland Bird Observatory, are for illustration.﻿ 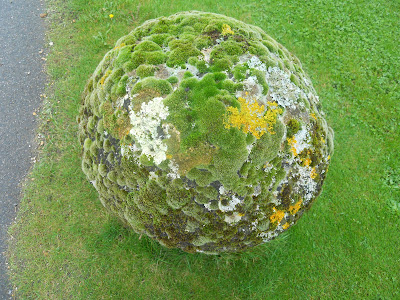 On to view the STADDLE STONES outside the Manor, which at this time of year always support an array of Lichen, Moses﻿ 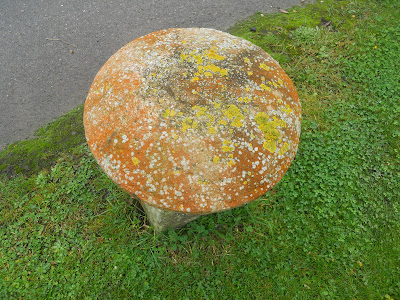 and in this case a type of ORANGE Fungal RUST.﻿ 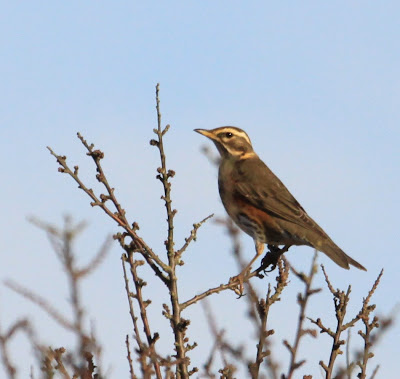 It was at that point that my attention was drawn to the plaintive location calls of overflying REDWING, which amounted to just c2 birds. These, my first of the Autumn, were followed by a flock of c11 then more calling from these or other birds.﻿ 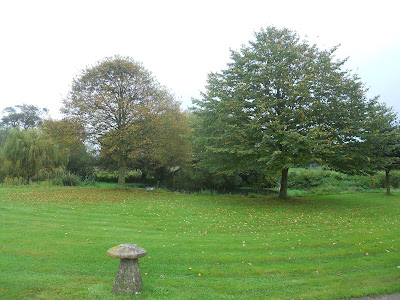 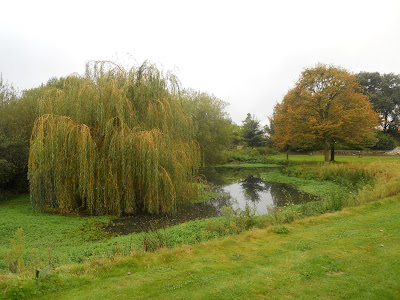 Checking the Tudor House pond for the Mandarin (s), drew a blank but the view alone was enough. 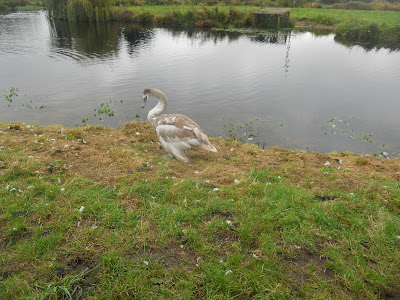 Back at the Parley Pond, it was good to see the injured Swan had rejoined the family group, but the adults are keeping 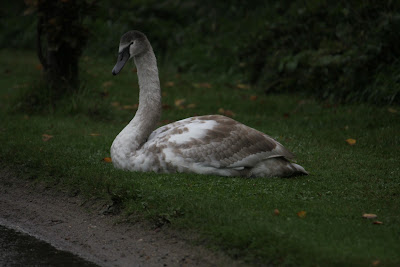 the 'new arrival' well away from the water, in fact it seems to be permanently consigned to the roadside verges.﻿ 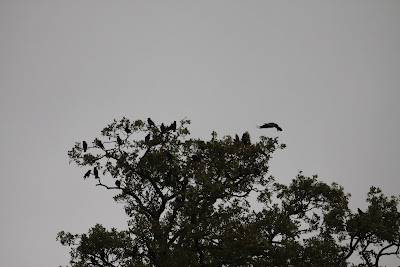 The rain had started again, so not best conditions to photograph over 50 Jackdaws high in the trees,﻿ 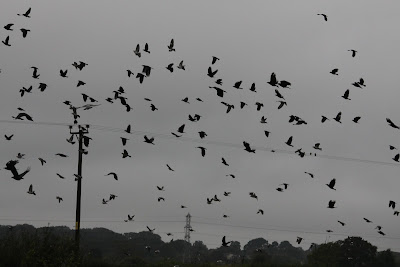 or the large mixed flock of Rook, Wood Pigeon, Carrion Crow and Starlings disturbed from a stubble field., 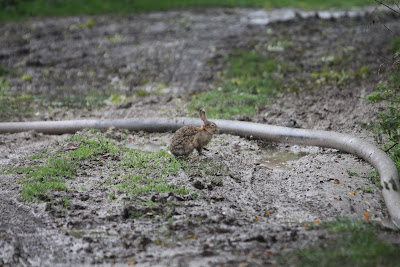 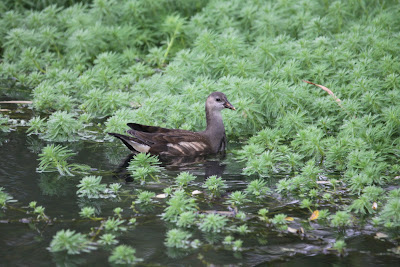 juvenile MOORHEN recorded it was time to beat a hasty retreat, arriving at the coffee pot just as the rain set in for the rest of the morning.﻿
As if the gift noted above were not enough, Hugh and elder son Daryl tell me they have another little surprise in store for me tomorrow evening but all have been sworn to secrecy. All I know is to be ready to go???? at 17:00 which I hope to share with the world via Saturday's post.﻿
Posted by Bagsy at 17:02