Nobody's Fault But Mine - Led Zeppelin

If indeed you are able to expand the photographs on today's Post, then the problem over the past weeks is Nobody's Fault But Mine. Happy to have blamed Google for a poor service, I continued to work on the problem via friends, forums and my own tinkering and now believe the situation to be resolved. In my continued struggle for neatness (photos centrally placed, text directly beneath etc) I have been clicking out the 'Link' element on each image to set the text close to the photo. Yesterday it was discovered there is no need to do this, so am hoping this works. With the appalling weather continuing, along with my confinement, it is easier to cope with and gives me another opportunity to continue my journeys through some of the wilder and most exciting part of the United States of America, the country that continues to dominate our Readership (have all you lovely Americans passed the Link on to your Friends and Families?).

http://bagsy-thecaptainslog.blogspot.co.uk/
From Fairbanks in Alaska, 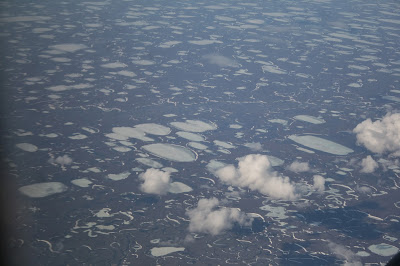 next came a flight heading well inside the Arctic Circle 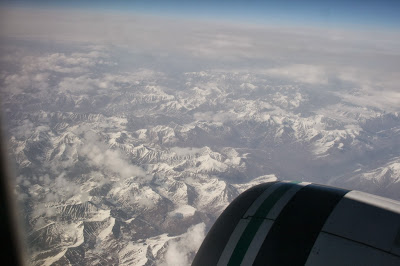 with these 2 images showing the moment (Port and Starboard)
the Captain announced 'the crossing'. 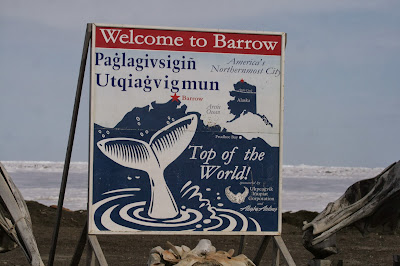 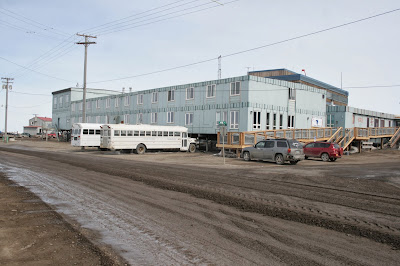 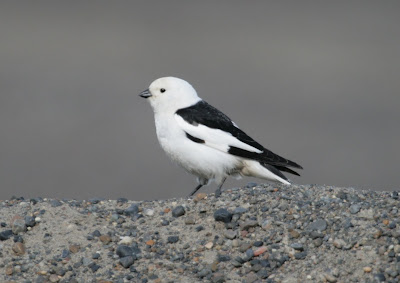 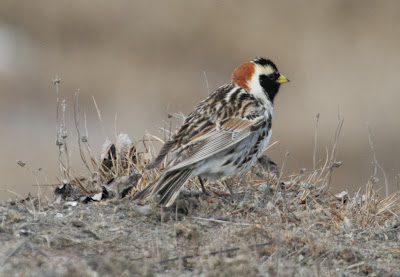 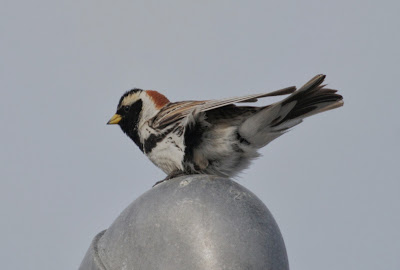 LAPLAND BUNTING
both species are common all over the town.
Dropping the bag it was straight out birding and a chance encounter
with 2 young 'scientists' studying the local bird-life on a quad-bike.
Would I like to see summer plumage 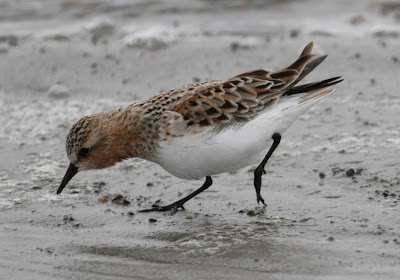 RED-NECKED STINT
was the question, followed by a lift to a small roadside and melting
ice-floe in a built up area. Also feeding at the same waterside were
Western, White-rumped, Semi-palmated and Least Sandpipers.

Next morning I managed to 'hitch a lift' out to the Point where again I was stopped by a young man in a car wanting to know what I was doing. He was there studying Cold Climate Medicine and told me he had a great interest in birds but didn't know any of them. He made the suggestion that he would provide the transport if I would tell him of the birds which worked very well spotting among many others 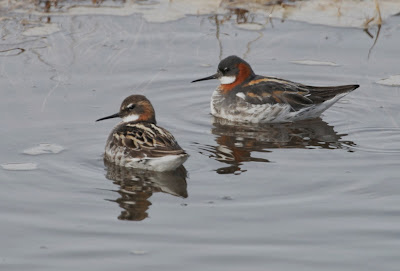 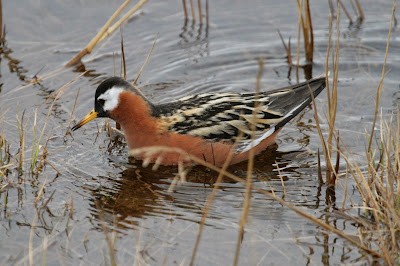 and what we in Europe call
GREY PHALAROPE
as when they visit our regions they are that colour. On the other hand
the Americans call them RED PHALAROPE
I'm sure you can see why! 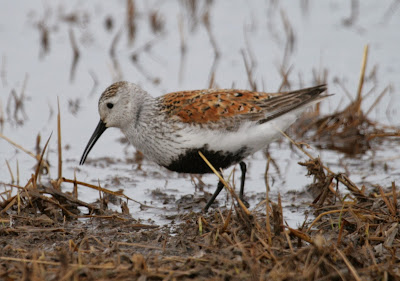 The 'smartest looking' DUNLIN ever seen by myself. 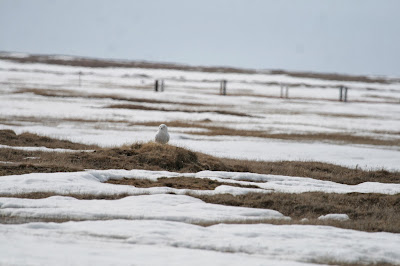 Then came something extremely special, a bird which at that time I
had never seen. Perched on a hummock and almost unbelievable, 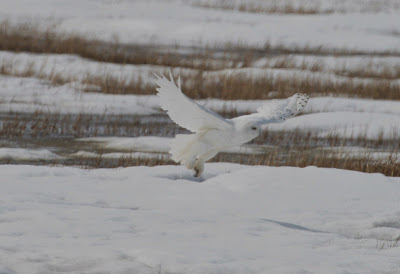 one of 3 SNOWY OWLS in the area, 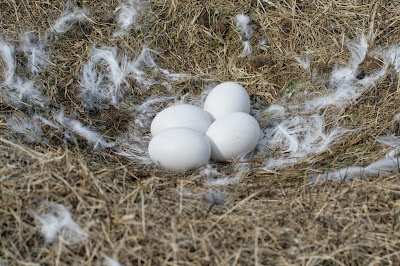 along with a nest we almost trod on it being so close to the gravel road. 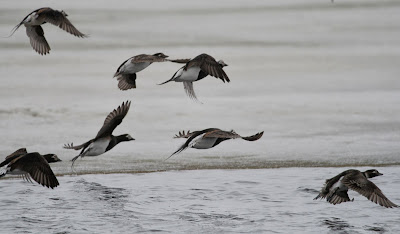 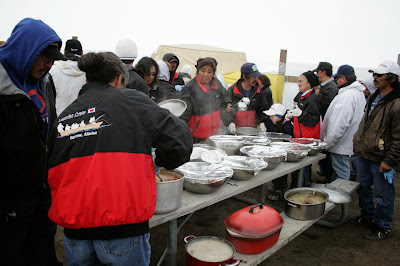 INUIT INDIAN (ESKIMO) WHALE FESTIVAL,
The main course of the meal, White-fronted Goose stew was on the
table waiting and I needed no second calling. 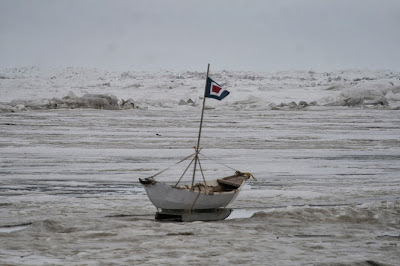 The Inuit are allowed to take a specified number (believed to be 28) of Bowhead Whales per season, which are hunted in the traditional manner with 'hand harpoons' and later a rifle to deliver the coup de grâce. These images show just how tiny the boats are used for the hunt which are left on the ice during the freeze. It is easy to distinguish the successful vessels, by the flag hoisted on the mast, and the crews are rightly revered as every bit of the mammal is 'used' being shared among the community. 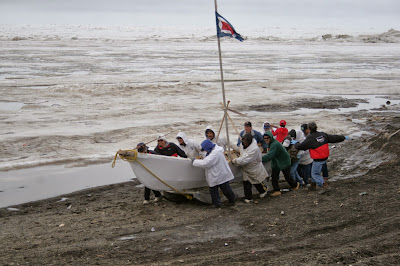 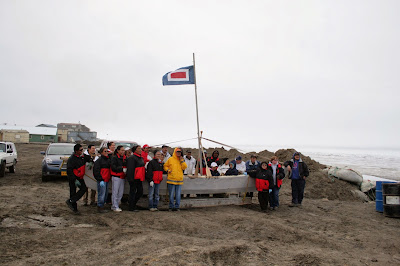 the town among much singing, camera clicking and prayers.
The highlight of the festival is 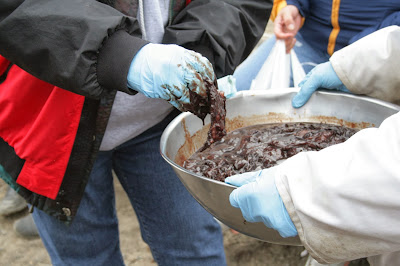 which is the traditional Inuit/Eskimo and Chukchi meal of frozen whale skin and blubber. The concoction above is however 'special' in as much as when the Whale is caught the choice cuts are placed in a barrel and marinaded in its own blood for 6 months. Each morning and evening this is stirred with reverence then forms the highlight of the festival. 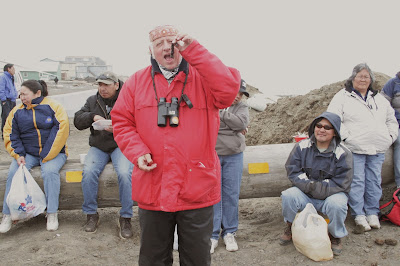 The towns people usually eat one or two strips while celebrating 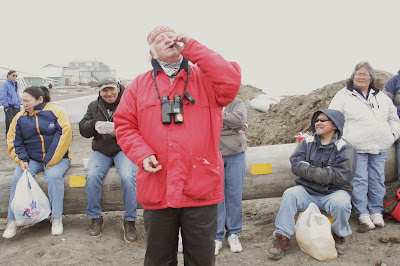 but most is taken home in plastic bags 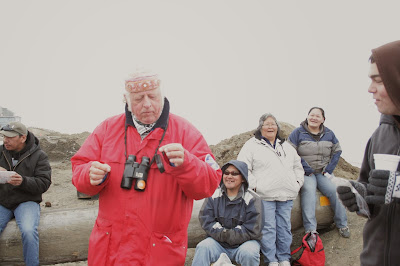 and treated similarly to a Turkey might be at Thanks Giving over
the rest of the USA. As can be seen, the locals were enjoying my
'tasting far more that I was.
NOT THE BEST THING I HAVE EVER EATEN,
BUT THERE WAS ONLY THAT SINGLE OPPORTUNITY.
I would consider myself a looser if waking any morning regretting
not having done so and so the day before!
Posted by Bagsy at 18:36