From where Janet and Hugh take their culinary inspiration is not altogether known (except of course from her Mum), but on each of the regular 4 evenings a week I find myself invited to dine at Harbins Farmhouse, the cuisine simply gets better and better. Always a personal favorite, and not always confined to Janet, are Sauces and Gravies, the flavors of which cannot be described, but the Jus that accompanied a whole Pheasant each for us men last night was sublime. My absent there the evening before, had caused a log-jam of reports such as a 2 minutes encounter with an overflying Honey Buzzard, the few Moths that made up that night's catch, a good number of Bats and a Nightjar 'hawking' at the root of Chapel Lane, a site where they had not been seen before. Hugh appeared fairly anxious  to tell his own tale, and when I finally ran out of breath it was his turn. He told of a juvenile Tawny Owl that had been found flapping about earlier in the day, by AN Other, 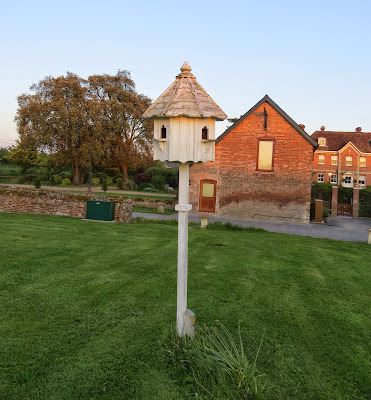 on the Ornamental Lawn directly outside of the Manor. It had seemingly fallen from its nest, which was reported to be in the
DOVECOT
but you know how some tales can get a little distorted in translation? He went on to tell of another anonymous passer-by who recovered the young bird and returned it to the nest. Even this scant information seemed plausible and if you want to see a maximum amount of Wildlife, and time allows, such reports are best acted upon a.s.a.p.. However, the following day it was revealed that the first half of the story was accurate, but the second involved the Owl Sanctuary collecting the Owlet and taking it into care.
The Story had Changed, but The Song Remained the Same! 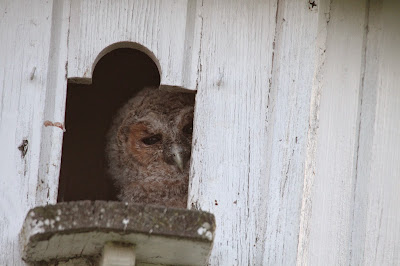 This is all I could find when visiting the Dovecot mid-evening, 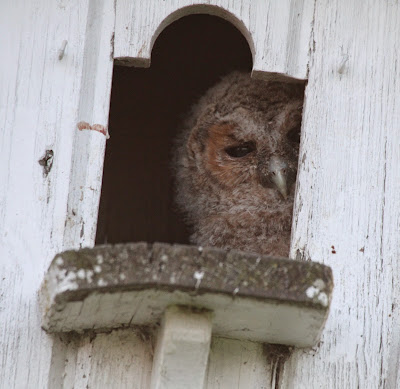 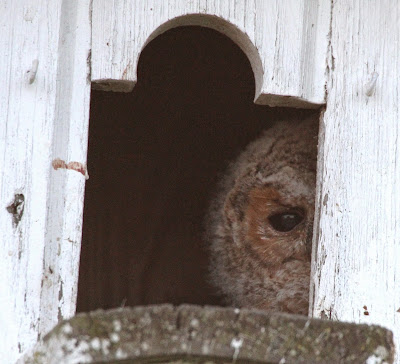 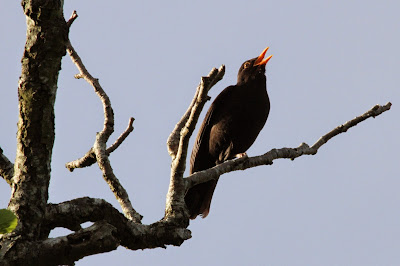 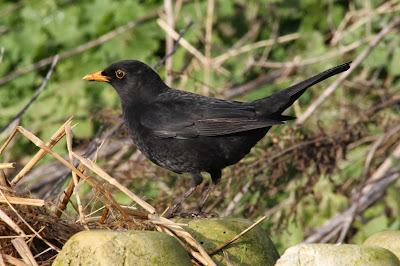 by a second on the ground.
If this raucous 'alarming' wasn't because they had spotted an Adult
Tawny Owl
then I was prepared to Eat My Hat, circa Paddy Ashdown!
A search of the nearby Holm Oaks in the Manor garden soon produced 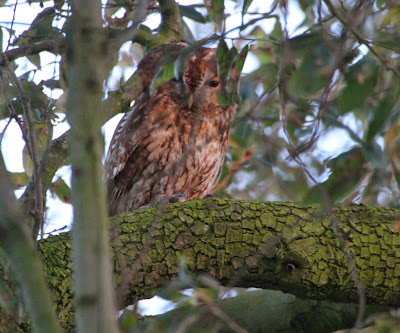 one of the adult 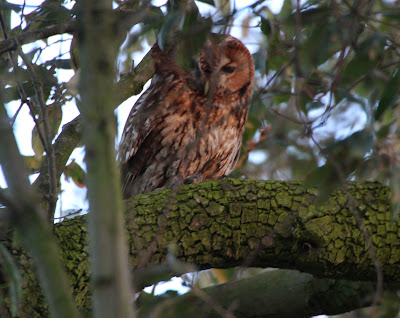 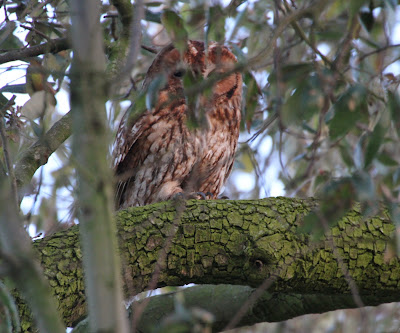 with my next action being to summon Hugh and Janet who also saw it well!
While it would have been nice to linger until dark there were still 5 Moth Traps to activate, and with the actinic now re-located to the largest Solar Panel Compound a visit to the north end of the property was required. Job done, it was now time to enjoy probably my favorite time of the day and what better was to take full advantage of Dusk than to tick along slowly in the St-Range Rover, lights ablaze and keep a good lookout? Quite a few Bats about and the odd Moth so an attempt was made to catch them in the hand-net. At the first, and last, swipe of the net 2 (both looking like members of the Carpet [Geometridae to get technical] Family Group) were caught one being immediately recognised as a 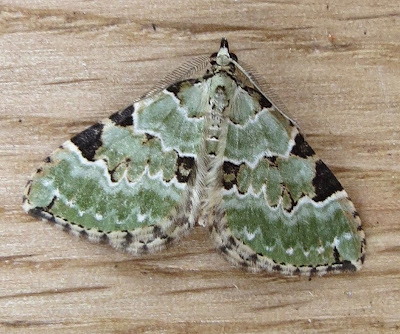 GREEN CARPET
while the other was either flapping around or perching with folded wings
so was consigned to the fridge to cool down.
What a surprise next morning when it was taken from the Cooler and
found to be none other that our 4th and Dorset's 6th 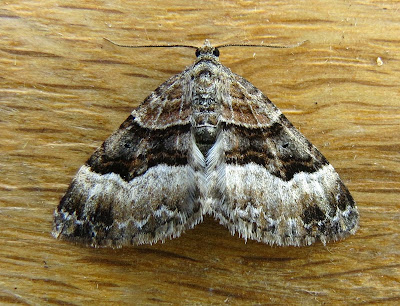 BALSAM CARPET
Given that all of the other specimens have been taken from the Southern
part of the Farm, this find lends credence to there being another Colony,
or Colonies elsewhere?
Best from the Morning's Catch and all New for the Year 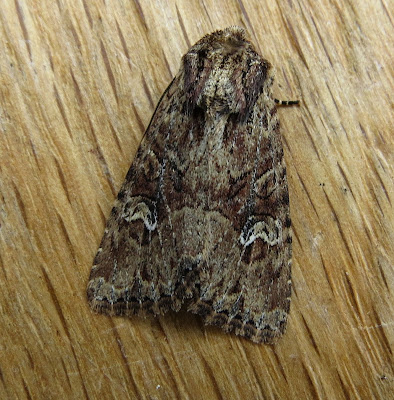 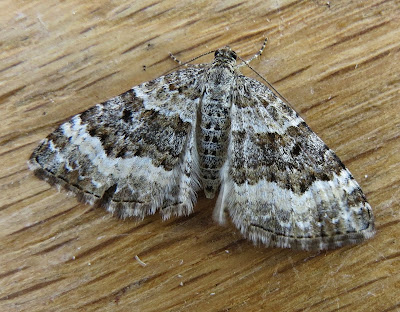 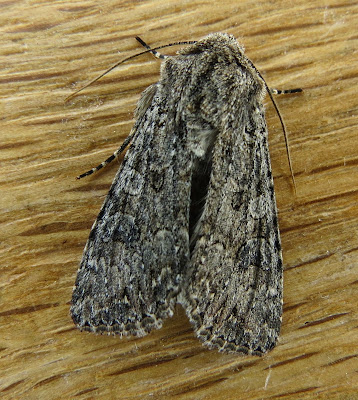 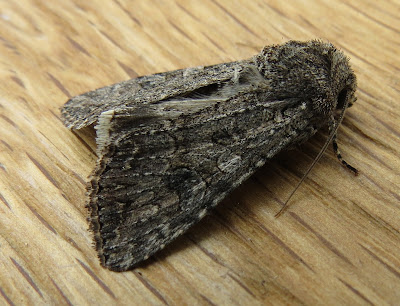 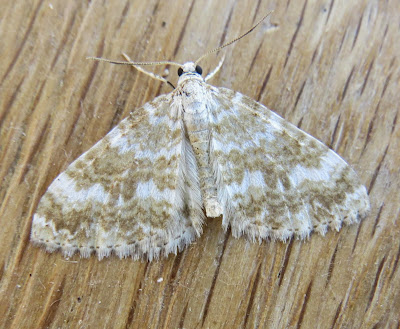 SANDY CARPET
and while we maintain that 'we don't do Micros'
there is always an exception to the Rule! 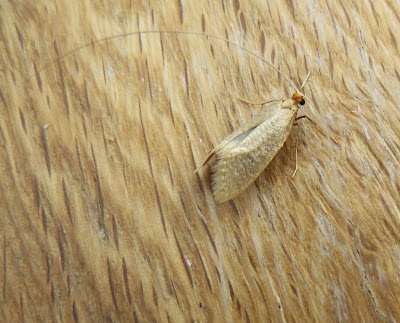 NEMOTOPOGON SWAMMERDAMELLA
(which we all knew anyway)
is one of the Longhorn Moths with in this case the male having
antennae 2½ time the length of the forewing.


Next came something of a Rescue Mission when one of the 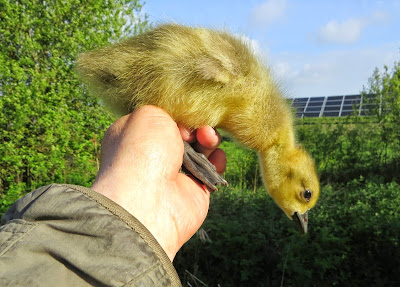 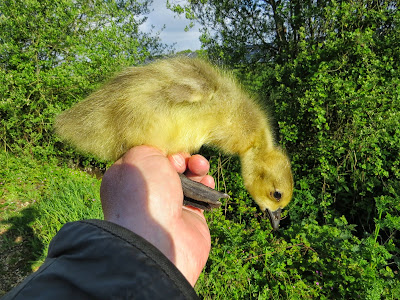 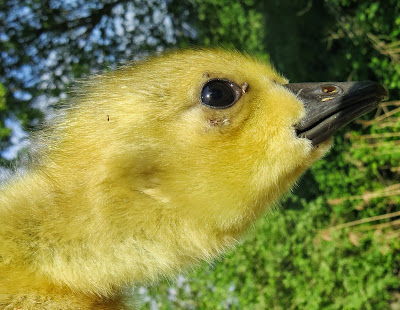 GOSLINGs
got a bit stuck 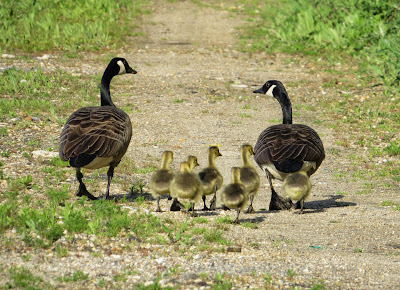 Happy Families Again
LINNET
STARLING
and from a little further afield,
but still in Dorset. 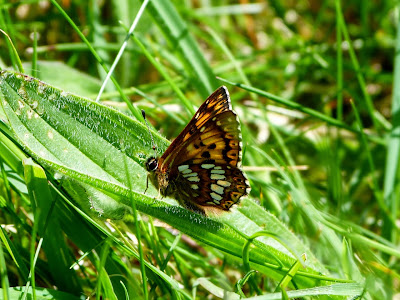 DUKE of BURGUNDY BUTTERFLY
While from a much greater distance, Brazil in fact, my friends
Jean Francois and wife Roong sent me this greeting from the 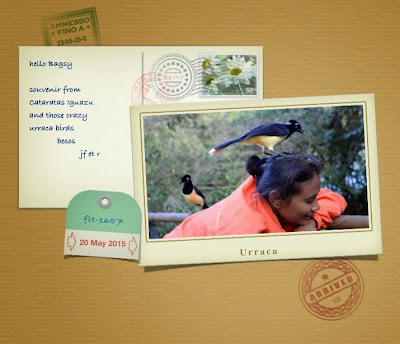 IGUAZU FALLS
Plush-crested Jay was coincidentally seen at that location during our
2003 Adventure.