From the 'Three Friends' Album

The Winger - Tess - Bagsy
oh yes and Relict Gull!
Prologue - Gentle Giant
If  'hand were put on heart' it would be told that my particular passion for a single musical genre would have to be Prog (Progressive) Rock! After a fairly short 5 year dalliance with 'Black Blues,' what seemed like a natural progression was made towards the 'White' interpretation flirting with the likes of Taste (Rory Gallagher), John Mayall's Bluesbreakers, Chicken Shack, Peter Green's Fleetwood Mac, Cream, Retaliation et al, until 1967 when Arnold Layne (who had a strange hobby) showed his hand. Pink Floyd continue to vehemently deny they are, or ever have been, Prog Rockers but they are wrong (apologies David), From that day on my already rather overcrowded vinyls shelf had to support both categories including offerings from the likes of Floyd, Yes, Gentle Giant, Wishbone Ash and latterly that sensational combo from Southampton, IQ. Among these, pride of place was always reserved for Genesis who's collective musicianship is exemplary and coupled with lyrics (most of which are committed to memory and which I describe as 'intelligent nonsense') which have captivated me for over 4 decades now.
In 1976, Paul Lifton (later to become known as The Winger, as in 'one who is taken under your wing') was experiencing far less difficulty in achieving a Master Mariners Qualification than myself, when we first met at the Merchant Navy Collage in Greenhithe, Kent. Maybe that was the result of the copious amounts of cash being foisted upon me by my Company, which will remain anonymous, as sponsorship to achieve the stated goal. Quickly falling into my ribald ways and enjoying a number of GREAT runs ashore together, he returned home to report his finding to his dear lady wife Teressa. Having both effectively bamboozled the Department of Trade and Industry at Cable Street in the East End of London out of a Master's Ticket each, before the parting of our ways there was a standing invitation to dinner should my path ever take me anywhere close to Minster on the Isle of Sheppey where they then lived. The Winger did advise me that no detail was spared when describing our 'outings' to his missus, while she in turn had thought she might not like me but wouldn't judge the book by its cover. There was of course the geographical buffer of the distance between Portland, my home then, and where they lived so the prospects were slim until my arrival in Chatham some months late on the Ocean Salvage Tug 'Confiance' for a long refit! Being big into Thomas Hardy (the Bard) at the time, a dinner date was arranged at which not only was there an instant mutual feeling between the 3 of us but I also re-christened her Tess (after she of the D'Urbervilles) a nickname and firm friendship that have survived the test of time to this very day. It is also true to say that in those early days credit can be taken for having turned them on to both Genesis and more latterly Bird Watching, while even their house was dubbed 'Home By the Sea' (which it physically was) after a Genesis track..
DON'T GIVE UP WE'RE ALMOST THERE!
It is true to say that over 40 years they have come to know me like the back of their hands so, when the unexpected telephone call arrived they had all corners and exits covered. It was no surprise to learn from Tess that they had bought me a gift of an evening with 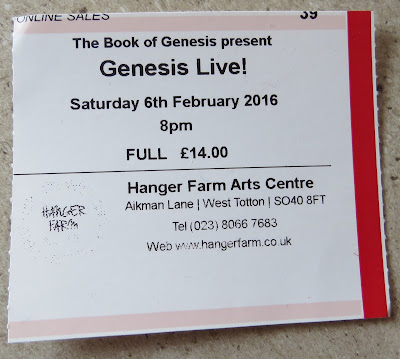 a Tribute band they had seen some months ago and strongly recommended.
Hardly had the words left her lips and I was in there with the "I'm a semi-recluse", "don't want to go mixing with hundreds of people", "I'm not driving around Southampton during the day let alone in the dead of night! etc, etc which goes under the heading of appreciation! No other surprises then when it was found they had it all covered with a "spend the weekend at our house (now just next door in Hampshire), we'll drive to the gig and back and we'll fit in some birding as well", seems that was me securely stitch up and organised!
Such a journey to the East, or return, cannot be undertaken without
a de-tour to Eyeworth Pond in the New Forest which regular readers
may recall we have already made 4 time this year without success.
It was to be '5th time lucky' as the 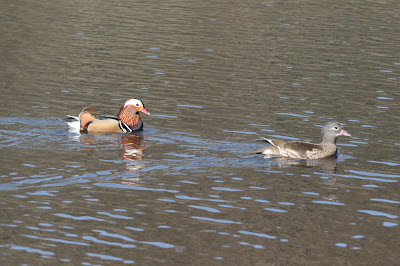 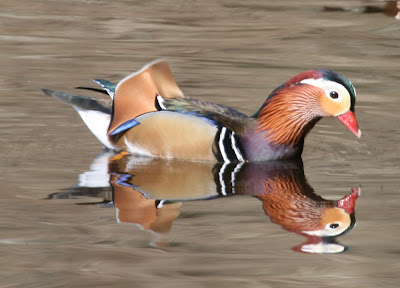 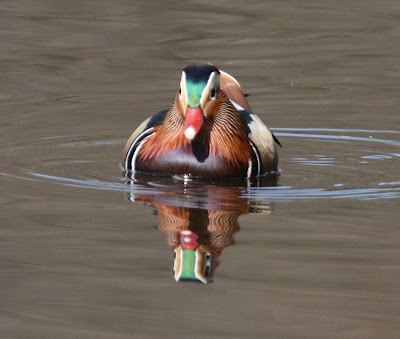 and in good numbers.
(males above and 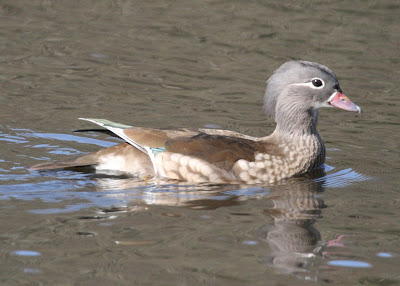 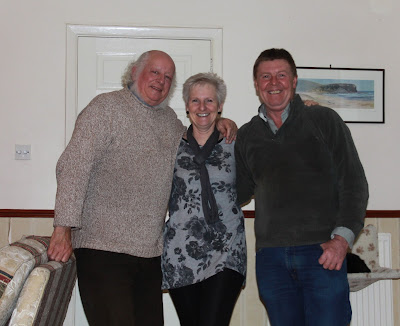 P and T and Me
There was a hearty soup with homemade bread awaiting but the main thrust
was to get out to
THORNEY ISLAND
The footpath runs along the cusp of Langston Harbour and while
all the elements, high wind and tide, likelihood of rain etc, there's
no stopping these two (3)! Predictably, it was more common fare
which sometimes can include a Year Tick or two. 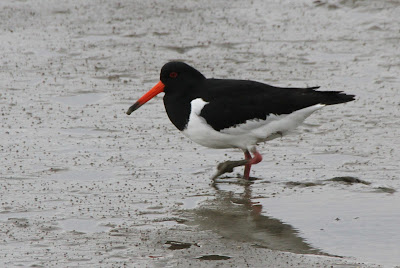 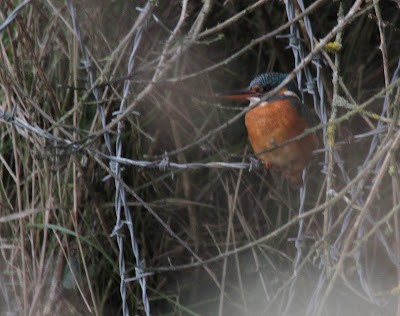 a rather reluctant
KINGFISHER
and then 'bingo' a 'hat-trick' 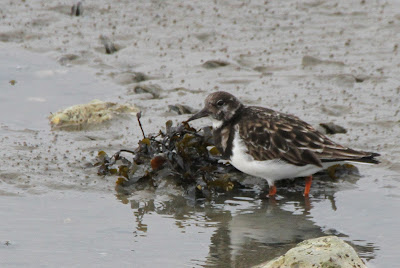 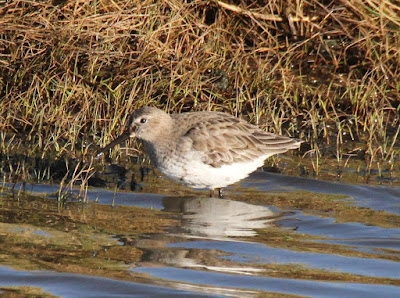 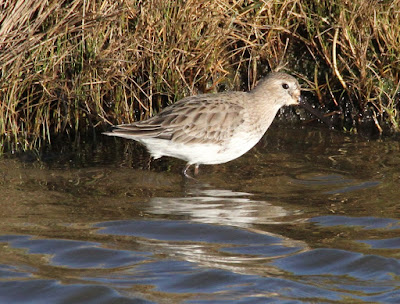 DUNLIN
as can be heard, a mite drafty, and 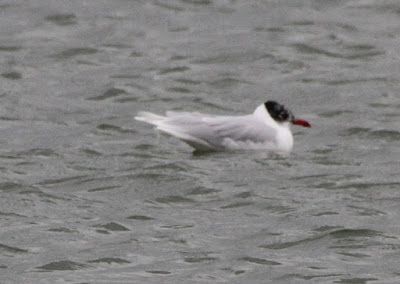 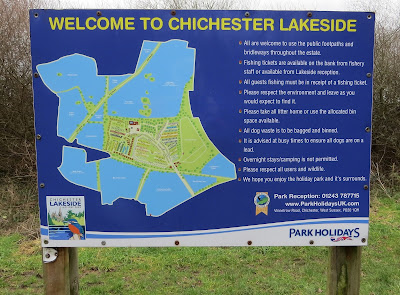 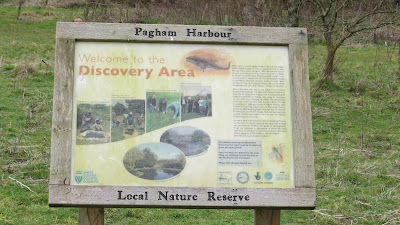 among a number of other sites, from where there were no additions to the Year List.
Saturday evening was given over to the 'main event' of my visit which took us all to
Hanger Farm Arts Centre
in Totton, Hants once, or maybe still is, the larges village in England?
(visit the Link above to see just what a 'cracking' venue this is)
Even before the gentle strain of the mellotron had introduced the first number the Lead Singer had stepped up to the microphone and wearing bat-wings and long black cloak, bringing a tear to my eye, there was no need to announce they were about to undertake their rendition of 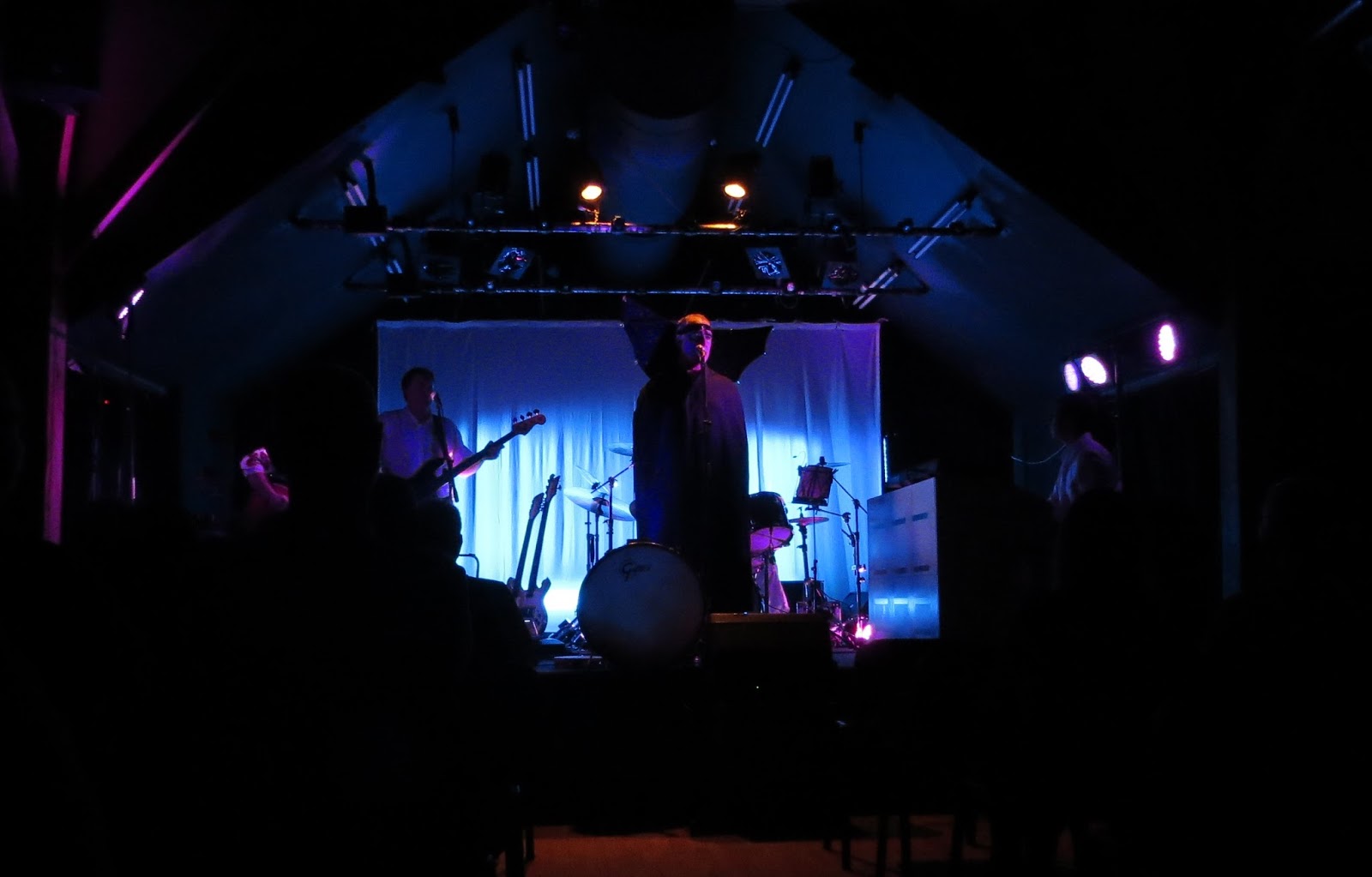 WATCHER of the SKIES
(from the album Foxtrot) 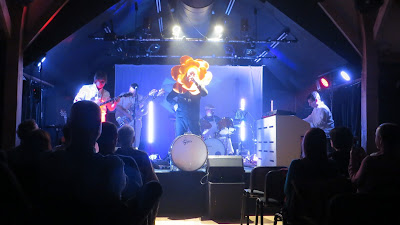 From the same album they then undertook the almost impossible task
of reproducing the 6 seconds short of 23 minute Opus Magnum
in its entirety that is
SUPPER'S READY
(Willow Farm)
We watch in reverence, as Narcissus is turned to a flower.
"A FLOWER"
If you go down to Willow Farm
To look for butterflies, flutterbyes, gutterflies
Open your eyes, it's full of surprise, everyone lies
Like the fox on the rocks and the musical box
There's Mum and Dad and good and bad 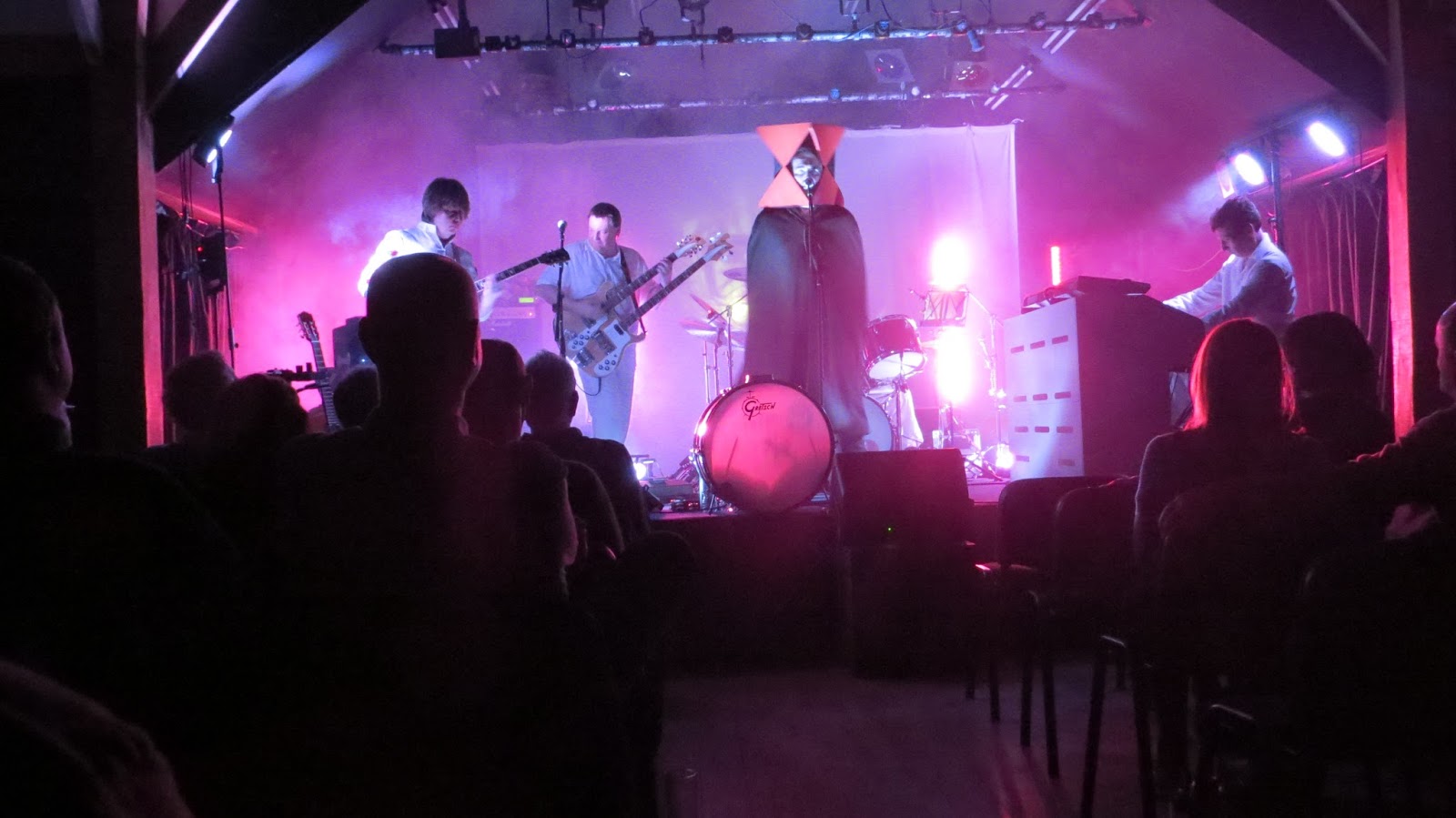 With the guards of Magog, swarming around
The Pied Piper takes his children underground
Dragons coming out of the sea
Shimmering silver head of wisdom looking at me
He brings down the fire from the skies
You can tell he's doing well by the look in human eyes
Better not compromise, it won't be easy
666 is no longer alone
He's getting out the marrow in your back bone
And the seven trumpets blowing sweet rock and roll
Gonna blow right down inside your soul
Pythagoras with the looking glass reflects the full moon
In blood, he's writing the lyrics of a brand new tune 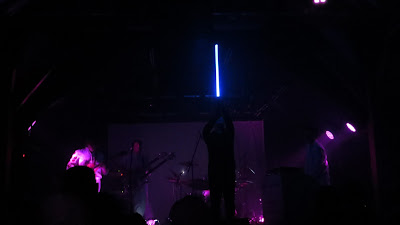 SUPPER'S READY
finale - (As Sure As Eggs is Eggs {Aching Men's Feet})
There's an Angel standing in the sun and He's crying with a loud voice
"This is the Supper of the mighty One"
The Lord of Lords, King of Kings
Has returned to lead His children home to take them to the new Jerusalem.
(reference Revelation 19:17)
Supper's Ready - Recorded Version from Foxtrot (Link)
With a severe limitation to how much footage can be uploaded to a Google Blog
we are unable to bring you most of the clips.
Stand up the boy who shouted Hooray!
Flute Break from
FIRTH of FIFTH
(from the album Selling England by the Pound) 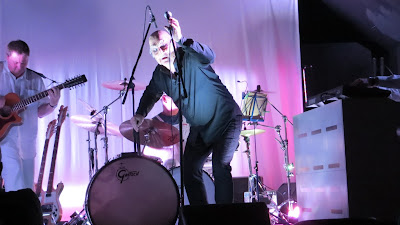 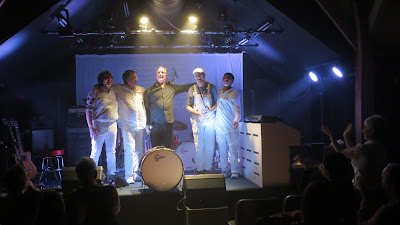 Given that Gabriel (and Co) at this time of great success were in their early 20's and he was about 5' 6" tall and weighed no more than 10 stone, his look un-like did a marvellous job even at 57 years, 6' 6" and at least 15 stone, as they all did. A great night was had by few than a 100 strong audience, but I for one would surely go again.
Tess and I spent all of Sunday morning on Farlington Mashes,
where The Winger finds the traffic noise just too off-putting, he has a point!
There, the following were added to the Year List 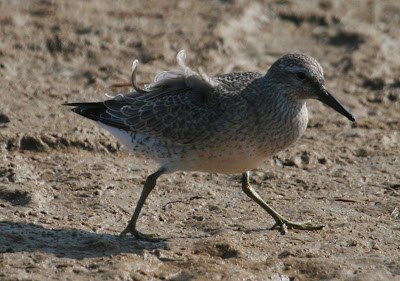 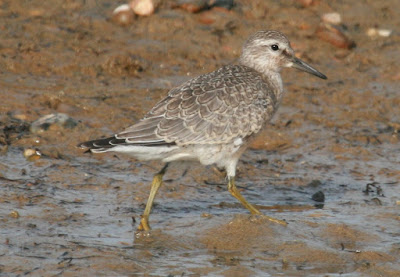 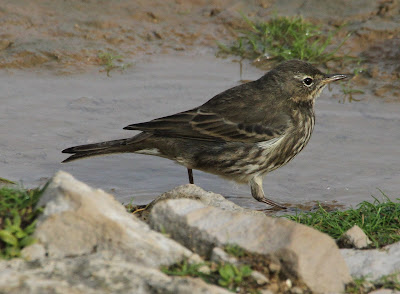 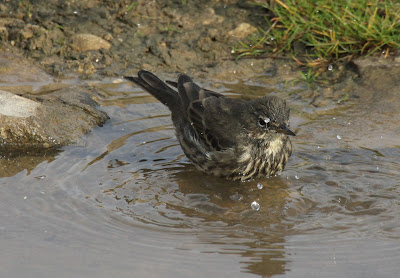 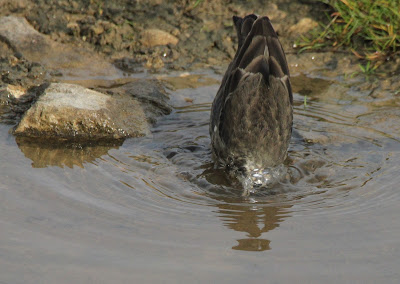 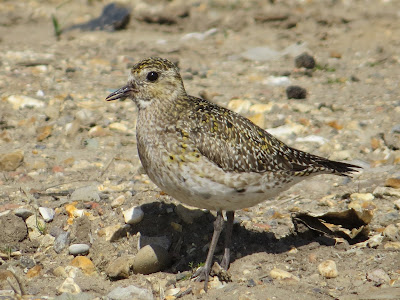 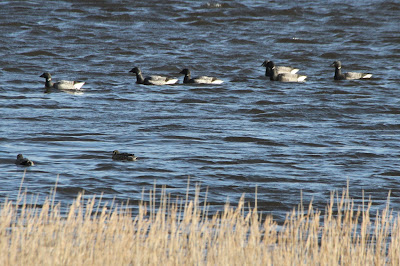 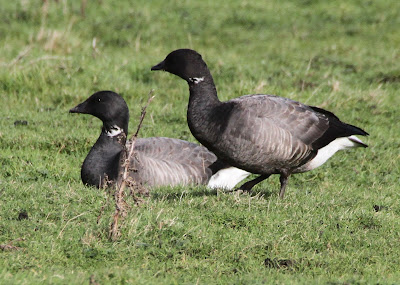 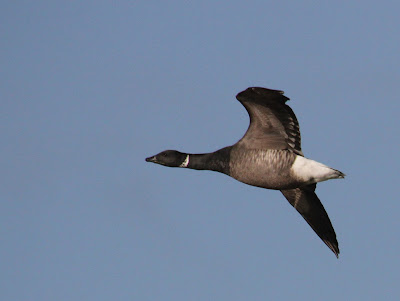 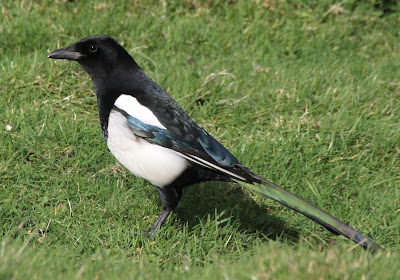 MAGPIE
WE CONSIDER THIS TO BE A 'MAGNUM OPUS' IN ITS OWN RIGHT!