Yet another period of heavy overnight rain, about the 5th
in a row by my calculation, the only advantages being a
Guard and Steerage,
the Royal Naval expression for an extra lie in the bunk,
and not having to water the Strawberries.
ALWAYS LOOK ON THE BRIGHT SIDE OF LIFE!
From the Moth Traps, and all New for the Year, we had 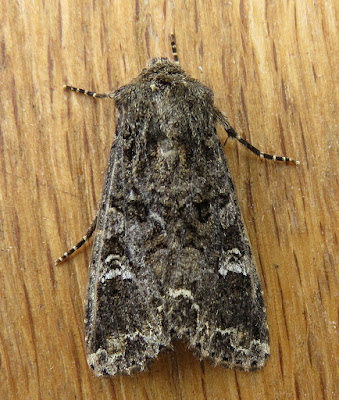 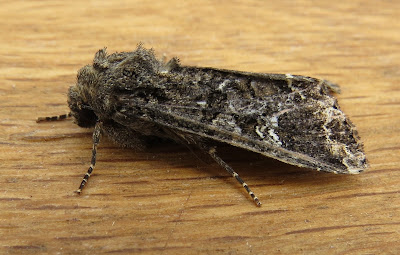 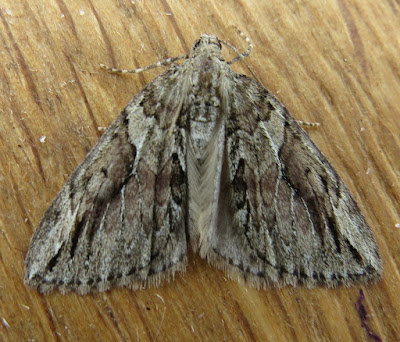 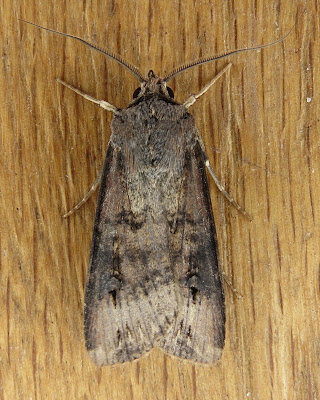 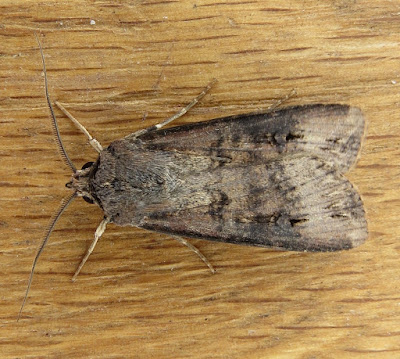 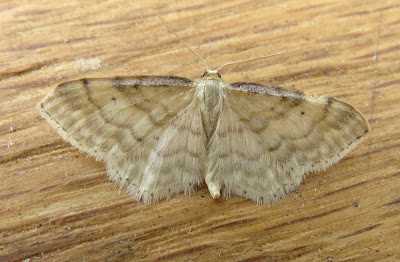 DWARF CREAM WAVE
not a particularly inspiring looking bunch but all grist to the mill.
The Dark Sword-grass is likely an 'immigrant', always welcome!
Not a lot of action to show for the first part of our wander today in fact the Wildlife was more of a 'static nature' than the mobile (Bird/Mammal) kind. A wander round Parley Pond threw up 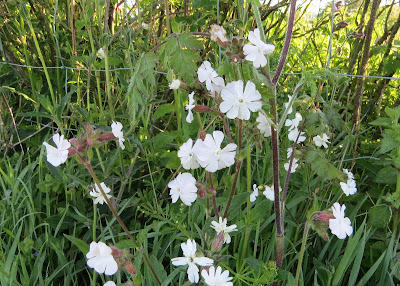 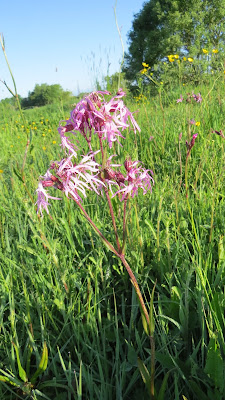 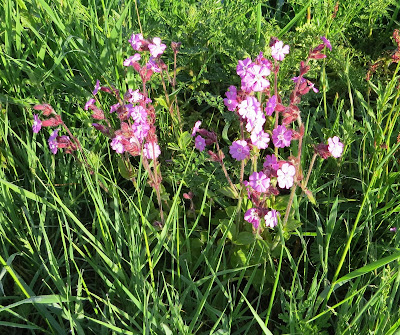 RED CAMPION
and then something of a lull until reaching the Irrigation Pond where
more a case of Clutching at Straws than anything else
we recorded one of the
COOT
patrolling the nest.
On the way round to the Heath we took a closer look at the 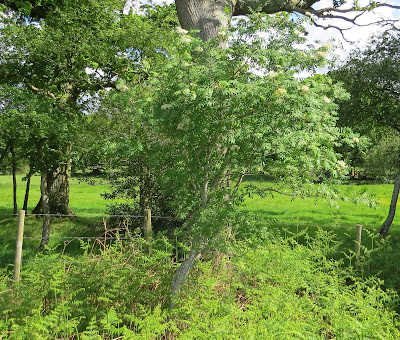 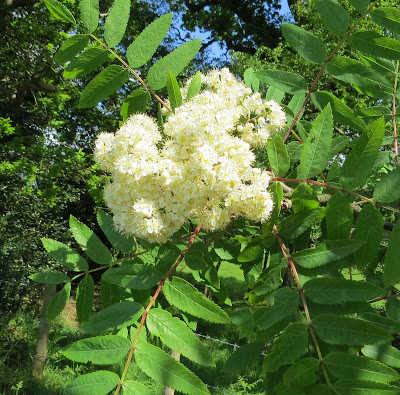 which are now all in full bloom and again the realisation of just how many
GREENFINCH
we have here.
A large and healthy population which seem to have had
a terrific Breeding Season.
and we simply title this clip
"The Grass is Always Greener"
While it is general practice to monitor the
Reptile Covers
every second Sunday, sometimes it become all too much
of a temptation to take a peek which was the case yesterday
when the (just) 2 that were turned produced a thriving 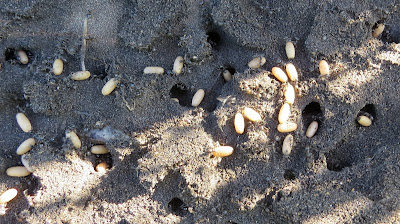 ANT COLONY
plus a rather chunky 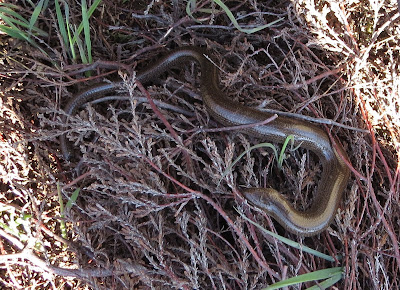 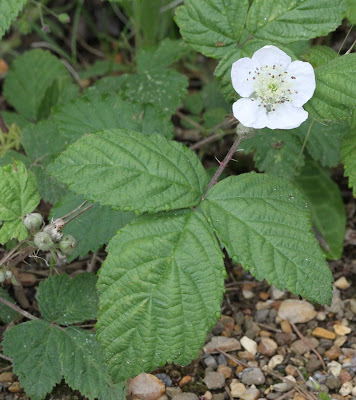 BRAMBLE of BLACKBERRY
What followed next could be described as a
Mini Purple Patch
as in quick succession 3 things not seen here before were noted.
Instantly recognised, due to many years spent on Portland,
where it is prolific, 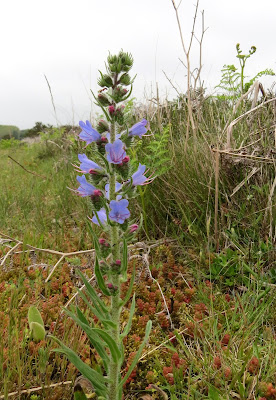 VIPER'S BUGLOSS
was something of a surprise but only 2 stems. 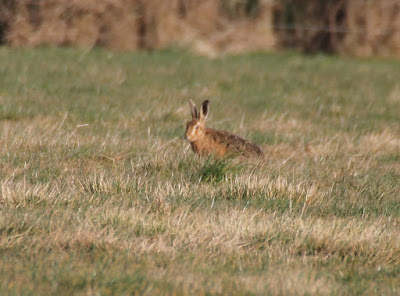 The next we are told by our friend John Gifford, who worked at the Airport
for a number of years, is not unusual here a 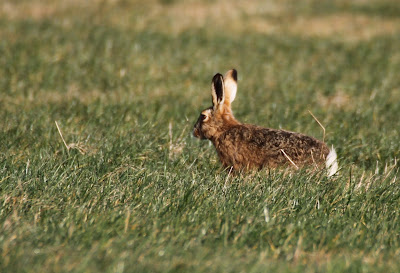 BROWN HARE
followed, as if there needed to be 'icing on the cake', by a 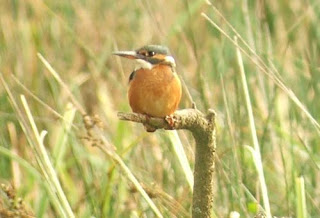 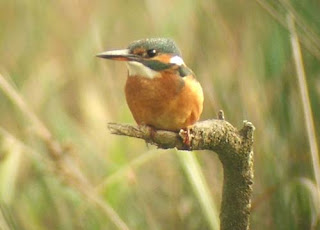 at the recently dug
Balancing Pond.
It should be note that thus far we have resisted the temptation to start a
Balancing Pond List,
but now more's the pity!
Our final location for the day was the
Eco Recycling Works,
or perhaps more correctly the rubble-strewn area behind,
where we quickly picked up on one of the 'many dozens' of this years
PIED WAGTAIL
but as usual our main target were the
LITTLE RINGED PLOVER
which, due to the continuous 'location calls' of the parent birds
are rarely difficult to find.
Our final record for the day concerned this pair of
STOCK DOVE
cavorting on the roof of one of the large sheds.
As promised in a previous Post we can now bring you
footage of the completed
SOIL BUND
(open to visitors Monday to Friday £20 per head
but please don't let the Dampney Family know
they are sure to want a 'discount'.
Entry