You Were On My Mind - Crispian St Peters

Part II of my Tribute to Michael (Huck) Hutley.
The very last place on earth I wanted to be was in my 'home town', but when the mighty hand of the Royal Navy writes the script it's simply a case of laying back and enjoying it, but once again FATE was about to lend a hand. For the sake of brevity we won't go into too much detail, but on arrival my 'part of ship' was Buffer's Party, in the hands of the Chief Boatswain's Mate and the lowliest dogsbody of the lot - back sweeping the roads.However, a timely meeting with another Chief Petty Officer who shared a mutual friend ashore soon found me directed to the post of CPO's Messman, again menial but part of a routine of a full 24 hours duty, followed by a day off then a 'make and mend' (afternoon off) on the third day, effectively an hour off for every hour worked. Even though falling on my feet 'big time' my next posting, hopefully back to sea, couldn't come soon enough and luckily the wait wasn't long. 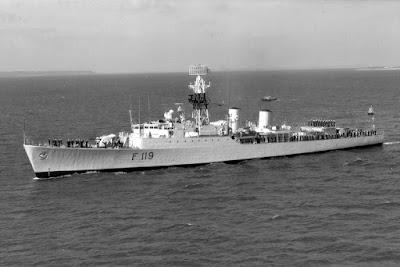 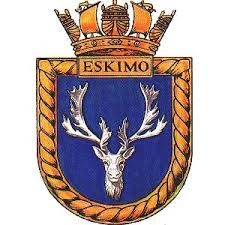 one of the New Age Tribal Class Frigate, purpose built for service in the
Persian Gulf, was about to complete a major 'dry-docking' refit in Portsmouth
prior to sailing for her second commission in the Gulf and Indian Ocean.
NOW THAT'S MORE LIKE IT!
but the biggest shock, surprise and treat was to come when walking into the
Sailor's Mess there stood before me was the newly appointed
Able Seaman Michael (Huck) Hutley RN. 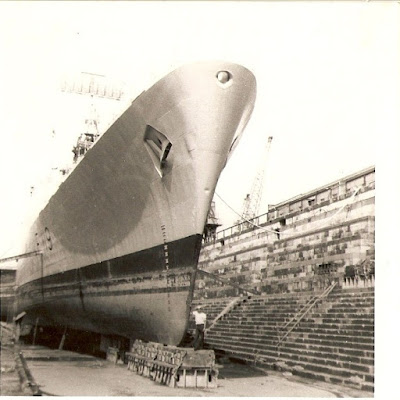 HUCK
at the bottom of the Dry Dock and 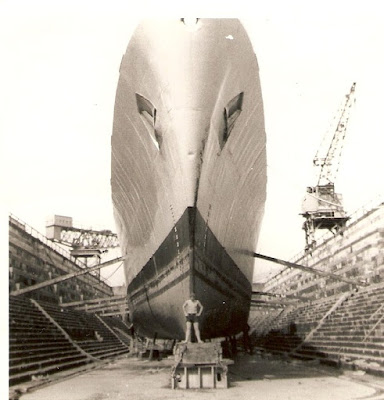 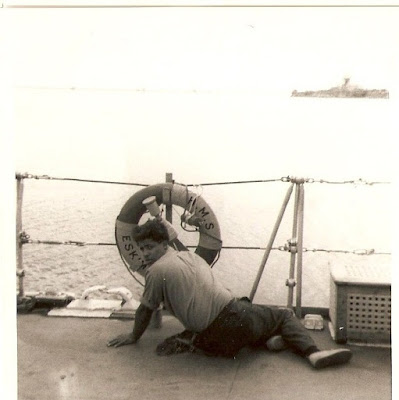 Chipping, painting, polishing brass, scrubbing decks was all part of
the daily routine but with the thoughts of what adventure might be coming
up during the next year was incentive enough to get on with it in a cheerful frame of mind.
There was of course the mandatory Work Up at Portland to complete but even that was
combined with 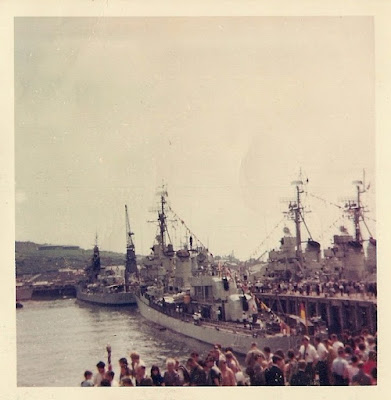 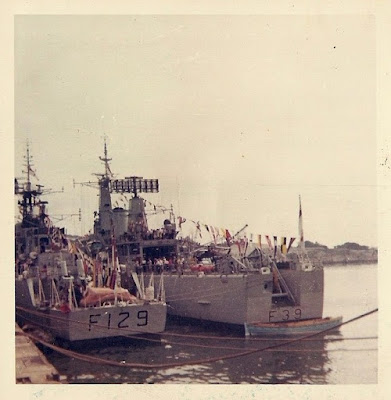 when the Fleet was open to the public gaze including of course
Lots of Young Ladies! 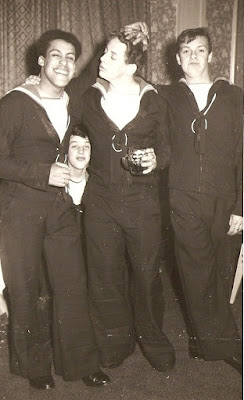 On our return to Pompey there was also a farewell
Ship's Company Dance
with more Beer, Young Ladies and Skylarking (allowed on such occasions)
HUCK, interloper Junior Seaman Smudge Smith, BAGSY and the greatest 'nutter'
of them all another GREAT Shipmate Alfred Barry 'Pincher' Martin.
No time for details of all the happenings along the way but how good to be back at sea with Huck!
Our track took us first of all to 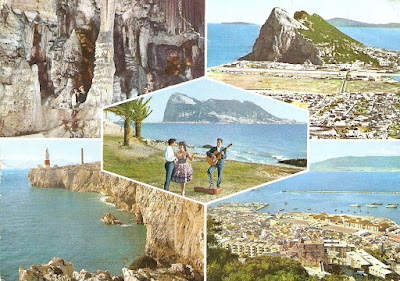 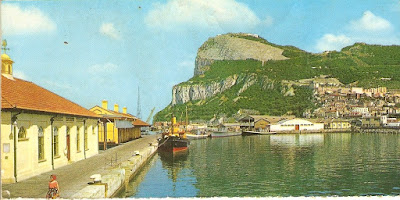 GIBRALTAR
before an electric week in 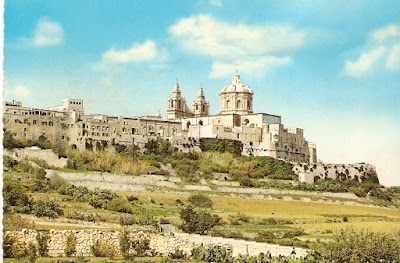 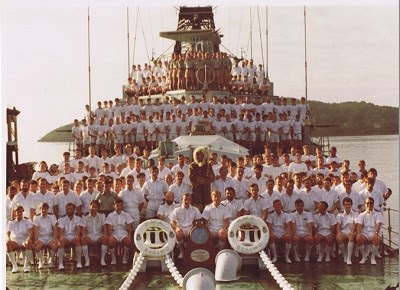 At which point we would change to
Tropical Routine and Clothing.
Next we would transit 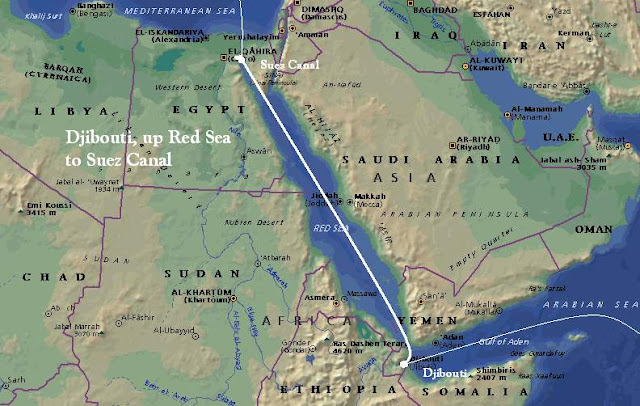 THE SUEZ CANAL
and RED SEA 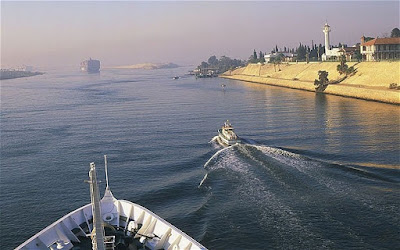 before reaching our next Port of Call 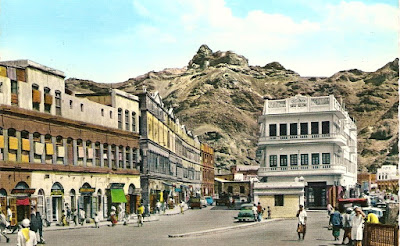 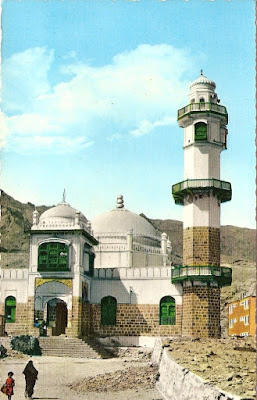 where things turned extremely serious!
CRATER CITY
British Forces had been present there, at the invitation of the Government,
for many year but still the fighting continued. In 1965 it was decided that
these troops would be pulled out of Yemen altogether and our part would be
to assist in undertaking this in as safe a manner as possible.
We had arrived during the late afternoon of Friday but had to wait until
Both Watches the Next Day
(when the full ships company would muster on the quarterdeck to undergo
what was colloquially known as 'Getting the Queen Out of Bed' by raising the
Union Jack, 'only known as a JACK when on a ship and FLAG otherwise'
in the bow and the White Ensign aft, where we stood.
THAT'S WHEN THE BOMB WENT OFF
blowing holes in nearby buildings, smashing windows and sending
a cascade of debris, glass and masonry, all over the full length of Eskimo.
We carried a contingent of Royal Marines (bless 'em) along with whom we would conduct 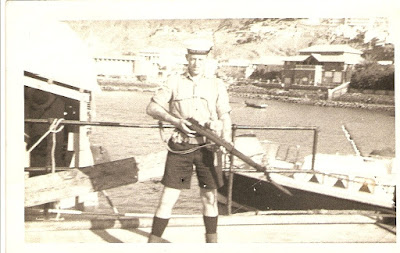 ARMED PATROLS
and although 'shore leave' was granted, only in civilian clothing. 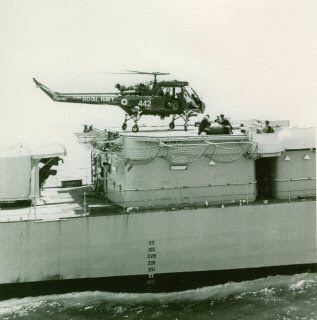 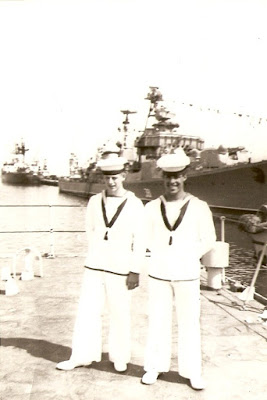 Huck and Me
in Massawa, Ethiopia (now Eritrea) for the Passing Out Ceremony
of Emperor Haile Selassie's Grandson who had recently
graduated from Dartford Royal Navy Collage.
Photographs now get a little thin on the ground, but we continued on
to what would become our Base for close on a year in Bahrain but not
before a short courtesy stop at Muscat, Oman.

While in the Persian Gulf our sea-going duties were more or less exclusively centred on deterring Pirates and Smugglers, at which we had a very good success rate.sending armed rummage parties onto filthy dhows to search for Arms, Drugs, Gold and other precious commodities and always on the lookout for Human Trafficking. Without a doubt our 2 visits to the Seychelles Islands were the highlights, but even then a number of visits to the Port of Mombasa took some beating - beautiful people. On 2 of those visits were were all allowed a One Week Station leave, where a handsome allowance was paid to each of us to live ashore as we saw fit. Even then our luck held as both Huck and I headed for the Inter-Services Beach Resort of Silver Sands on the balmy Indian Ocean Coast. A 'paradise' in itself but one that was quickly found to be too far from the night lights of Mombasa, but we had made our bed! As if some magical power had heard our plight, the very next morning there was a call for all personnel to return to the ship without delay and for those of us staying her transport was supplied. A Spanish Oil Tanker was threatening to run the blockade which was Beira back in the 60's in an attempt to supply much needed fuel to the Ian Smith regime in Southern Rhodesia as it was then. This was to be stopped at all costs and the task fell to the Grey Ghost of the Trucial Oman Coast as we had now christened ourselves. 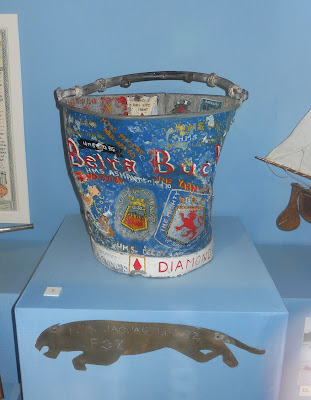 THE BEIRA BUCKET
still stands in what is now the
Royal Navy Museum in Portsmouth Dockyard
something of a 'spoof' Badge of Office for the ship serving on Beira Patrol.
There was aways something of a ceremony when it was passed from ship to ship by Jackstay Transfer.
We arrived back at the ahead and stern buoys at Mombasa
to find that the Captain (Commander Alister Anson later to become Admiral of the Fleet)
had ordered that all Station Leave would commence again, in full, from that time.
Not only had we enjoyed a full 24 hours (paid) leave already,
but were now in a position to rearrange our accommodation ashore
and booked the full week at the New Bristol Hotel just off Jomo Kenyatta Boulevard.
There were also short Jollies to Dammam in Saudi Arabia where we were guests of the
ARAMCO Oil Company who picked us up in US style School Buses and drove us to a bespoke township
far out in the desert. There was no alcohol but the food was of the very best
and activities ranged from chess to horse riding. The final run ashore before our departure back to UK
was Kuwait, which was a scaled down ARAMCO but none the less enjoyable.
On our arrival, again Huck and I parted company which could have been forever
despite promises of keeping in touch, life ofter ain't like that!

Having left the Royal Navy and now being a member of the Merchant service we roll forward to 1978 when, undergoing my Captain's training at the Greenhithe Merchany Navy College, Kent, I was driving the A31 back home to Weymouth. Seeing such familiar place names as Alto, Ropley, Four Marks, Alersford etc brought to my attention when we would pay the odd visit to each others homes, the opportunity was taken to call in at The Chequers Public House where surely someone would know of Huck's whereabouts? The Landlord was new and had no idea and with only a single customer chances were narrowing. We talked for a while and while he did know Mick he had not seen him for many a day and thought he had come to grief on a motorbike? Hope was not lost, but now the chance of any further contact looked much less likely.
It was June 2011 while transiting the Alaska Highway for the 3rd time
and arriving at Anchorage that an E-mail was received from 'a' Michael Hutley,
and there can only be one, it was him! Trawling the Internet for the history
of HMS Eskimo, he told me, he understandably entered Bagsy to find
this Blog and it simply bloomed from there. On my return we had a couple of get-togethers,
one being a visit to HMS St Vincent (now an Establishment of Education) and
to Pompey to visit the Royal Naval Museum. 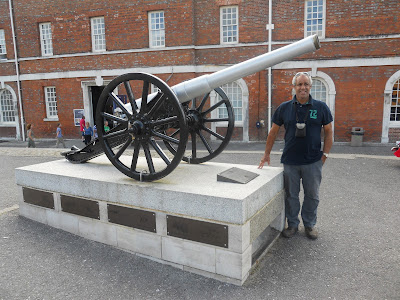 Heady days to finish this tribute but that was not The End. 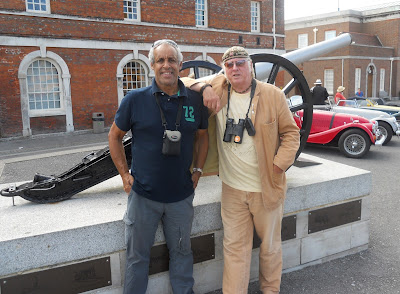 For our 'year long' efforts in the Persian Gulf and more particularly in
Yemen and the Gulf of Aden, none of us were awarded the
Southern Arabian Peninsular Medal, which meant to me personally
Not a Jot.
Huck however, far more patriotic, thought this a travesty and spent many
years trying to convince the Mandarins in Whitehall that we had 'done our bit'
and were worthy of such recognition. The reason given was that
"We were not there long enough"!
we were however there long enough to be KILLED but not for their precious GONG.
My view = Well done Huck for the effort, to the bureaucrats,
Pin It Where the Sun Don't Shine!

Finally, and with my Dear Friend laid to rest the words of Emily Bronte spring to mind
I lingered round them (Gravestones) under that benign sky:
Watch the Moths fluttering among the Heath and Harebells.
Listening to the soft wind breathing through the grass,
and wondered how anyone could ever imagine
Unquiet Slumber for the Sleepers
In that Quiet Earth.

Well, that's it Shipmate the story is told, until we
weigh anchor again and set sail for our next run-ashore.
Somebody please warn the Angels!