Tea For One - Joe Bonamassa

The first day of Meteorological Winter looks as if iy will dawned in much the same way as had the last of November, with a temperature of -5°C, a reasonably heavy frost, no wind along with a stunning sunrise but small Birds particularly were scavenging what morsels they could find! 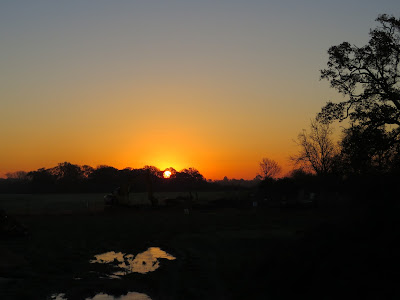 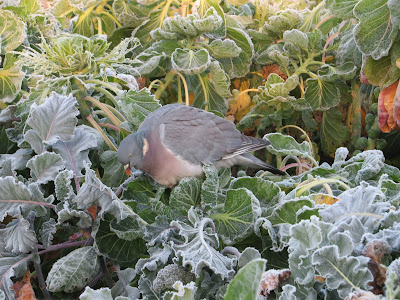 Of Cabbages and Kings 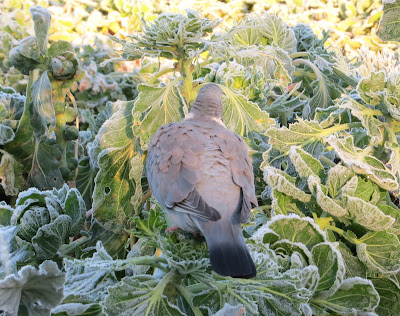 and not to forget
WOOD PIGEONs
as Lewis Carroll might have written had he thought of it
"The time has come," the Walrus said,
"To talk of many things:
Of shoes - and ships -  and sealing-wax
Of cabbages - and kings
And why the sea is boiling hot
And whether pigs have wings."
as they nicked Hugh's brassicas! 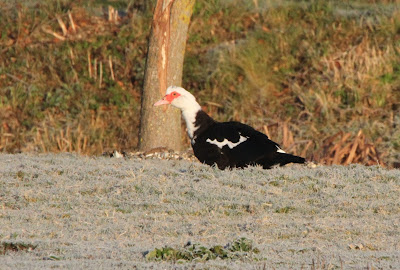 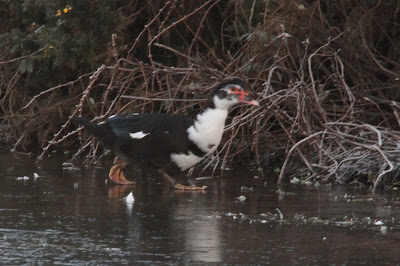 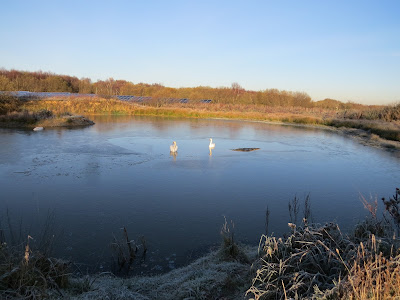 At the Irrigation Pond there were no more Wildfowl than c2
MUTE SWANs
which even then were pushed for space with no more than a 'postage stamp'
of open water.
With no time to jockey for position we captured, through the windscreen this 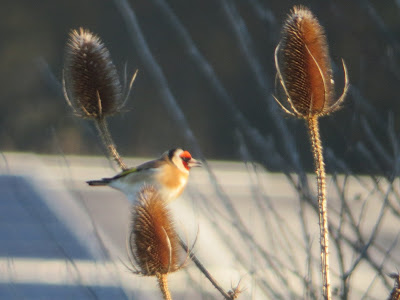 GOLDFINCH
finding some sustenance from the Teasels,
while all else on Parley Court Farm amounted only to c5 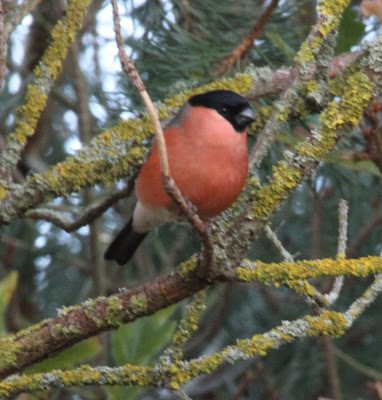 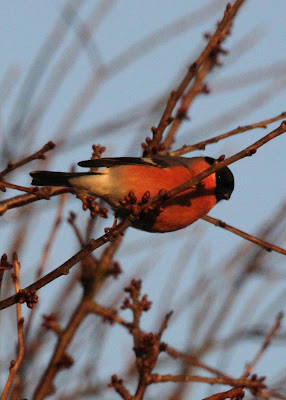 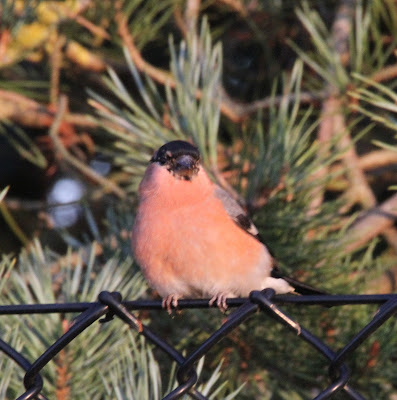 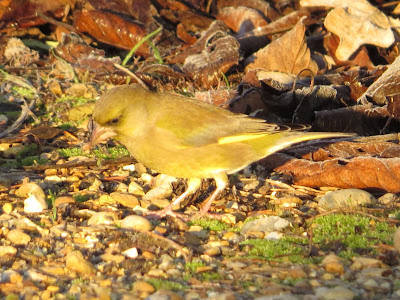 along with a couple of feeding 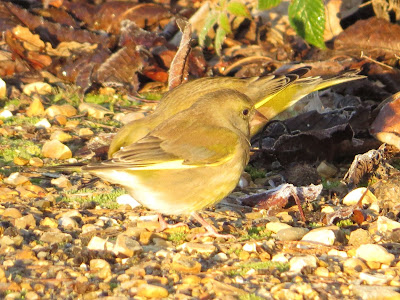 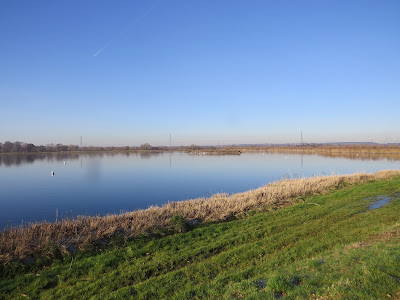 LONGHAM LAKE
yesterday, firstly thought to be a 'possible' White-rumped Sandpiper
and then later a Semi-palmated Sandpiper, both vagrant from the Americas,
but a further report had highlighted c3 Great White Egrets
which were far more to my liking. We don't often go off piste and all
through the morning it was touch and go as to whether we would today.
At the 11th hour we bit the bullet and headed off on that epic 10 minute journey. 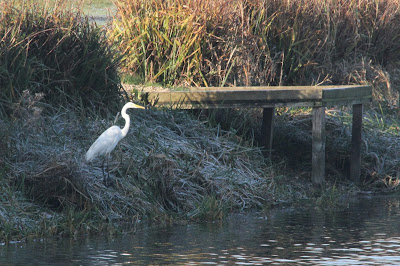 With the huge size of these beautiful creatures 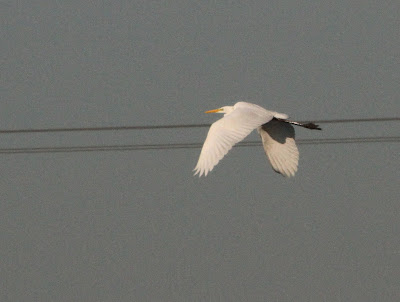 they were not difficult to find or see 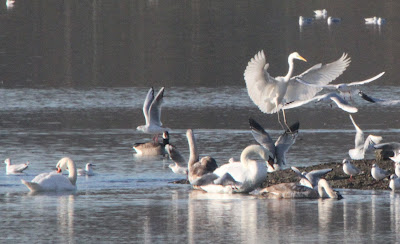 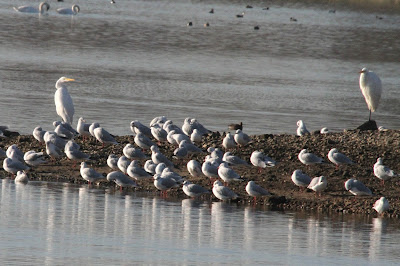 Two of them were content to remain fixed on their 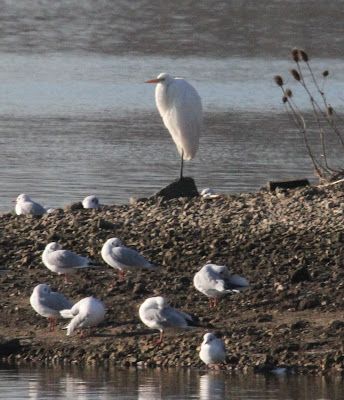 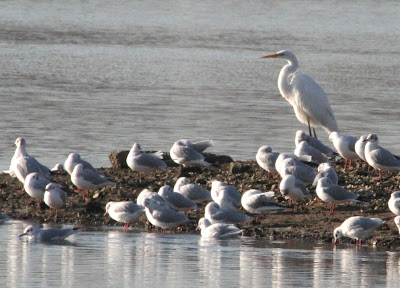 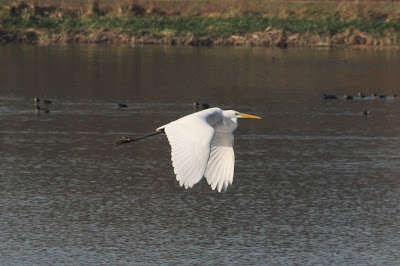 while the third was most flighty. Just before we left it again took to the air
and gained great altitude and headed east, and at one point invaded 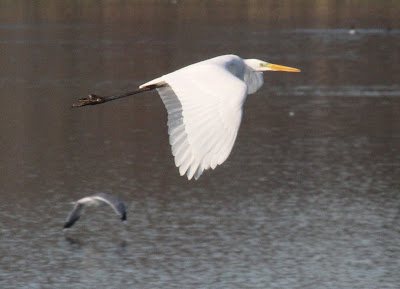 Parley Court Farm Airspace
another new species added to our
Recording Area List!
and what about the relevance of Tee (sic) For One we hear you ask?
On our way back to Slight Return we discovered this 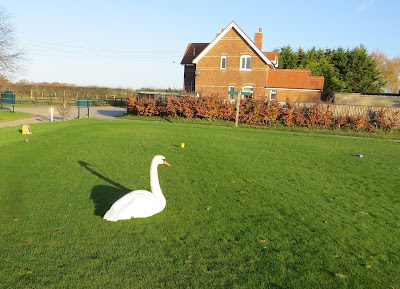 'LONE' MUTE SWAN
on the 4th Tee which in our slightly warped thinking brought to mind
a play on words and the Joe Bonamassa 'cover' of the Led Zeppelin
track (from their 1976 album Presence)
'Tea For One' Link
Personally I am not a great lover of 'cover versions' and no one messes with Led,
but this track, which first brought Mr Bonamassa to my attention, goes down as
the Golden Example of the Exception to the Rule. An extremely difficult number to sing,
I have practised it until black in the face but never subjected it to a live audience as
Bowie and Sheila would tell you!
This Post is dedicated to those 2 Dear Friends, what a night that was!
Sweet little Ille, you'll know her if you see her
Blue eyes and a ponytail
Her checks are rosy, she looks a little nosy
Man, that little girl is fine.
Posted by Bagsy at 05:40