This letter from Ian Dodd, respected bird 'ringer' and naturalist in the county, has been published elsewhere on the Blog, but in such a poor way that I need to highlight it again here. Ian, unlike the majority, has taken the time to air his views in the hope that someone, somewhere will realise that all is not well with Nature Reserves in our Borough. Thank you so much Ian.

I have two comments on your notes of yesterday’s (30th) meeting. Please see below.

RE: Dante did agree to investigate a number of my concerns (well documented in this Blog) and so I await his findings……

Comment: The meeting attendees presumably knew of your specific concerns a long time before the meeting, so to say that ‘they will investigate a number of (your) concerns' suggest to me that they did not plan for the meeting, despite knowing the main agenda items in ample time. Such behaviour would be considered unacceptable in modern business good practice and says a lot about the organisations the attendees represented and suggests that you were onto a loser even before you started.

RE: The final issue discussed was the Little Tern colony at Ferry Bridge, and while I requested to look at the documentation allowing both 'ringing' and 'disturbance' no fewer than 4 times I never did get to read them. I had to agree (wholeheartedly) that success at the colony was most welcome, but will at some stage write to the British Trust for Ornithology to confirm that all forms of disturbance (photography particularly) are covered by these documents.

Comment: Naturally I agree with the second part of this paragraph and commend those who contributed to the successful outcome at the colony. Concerning the documentation you wished to see I see no reason why the attendees should not allow you to see the Schedule 1 licence for the Little Tern ringing and/or photography; I can only assume that as any Schedule 1 licence is issued in the name of an individual then the licensee would be in possession of the appropriate documentation and that it would not be immediately available to the meeting. Nevertheless, once again it would appear to indicate a lack of planning on the attendees part. (For your information, any BTO ringer would be required to obtain such a licence before embarking on a Little Tern pullus ringing programme and other participants would be covered by the same licence so long as the licence holder was present.)

I hope these comments are useful.

Very useful indeed Ian, as what I had to assume were the licences were in place but unrealise by me at the time there was plenty, and effective, 'sidetracking' going on. However, and outside of your comments above, coincidentally today I bumped into a long standing friend who is a long standing member of the Weymouth Fire Brigade. It was always my intention to visit the Brigade, and will still do so, but what he had to say 'off the record' was most illuminating and unlike Dante Munn tried to portray as "a good exercise for the Brigade as they don't attend many waterborne incidents".

This brought us very neatly to an incident that happened some years ago, which we both attended, and stimulated me to return home and get the photo albums out.

January 1986 has gone down in the weather archives as a particularly angry month, with gale force wind and heavy rain recorded on many days, not least Tuesday 28th. I hadn't long finished my evening meal when there came a knock on the door from one of the Naval Base drivers with a request from the Queen's Harbour Master for me to return to duty, which I did with the driver. On the way he briefed me that a Libyan freighter, broken down mid-channel (English Channel), had sent a Mayday message with little more information than that. The harbour tug Sheepdog was deployed to effect a rescue, in conditions that were not ideal, but on arrival found we had a major problem with language barrier.

Usually in situations such as these it would be agreed with the Salvers (us) and the Master of the stricken vessel that he would, when circumstance allowed, sign a 'Lloyd's Open Salvage Agreement', transferring the responsibility of his ship the the rescue vessel on the understanding that 'no cure would result in no pay'. As this type of arrangement is conducted 'over the air', anyone tuned to that frequency would hear the agreement so there is never a doubt over detail. What we did know was that the vessel was named the Ebn Magid, registered in Tripoli, Libya but what was in doubt was what she was carrying, most important as there were already signs of a fire onboard. Fortunately, a towing hawser was connected and the return to Portland Harbour was undertaken without incident and on arrival every necessary service awaited the ship, her crew and ourselves. 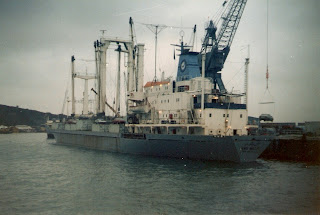 Securing vessels of all sizes was a daily task for all of our tug crews, so by 05-00 the following morning this had been effected, but there was some concern that the Harbour Authority had decided to moor her at the Outer Coaling Pier, the main fueling berth and Avcat aviation fuel storage bund? Still with little idea of what the vessel was carrying and in a none commercial port, make-shift unloading rigs were rigged and removing 'deck cargo' began. With no manifest onboard, it was over a hour before her cargo was confirmed as it became clear she had been plying European ports picking up any commodities she could, given Libya's economic standing in those days. 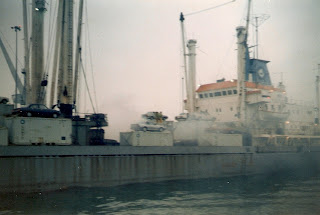 By 07-00 light wisps of white smoke were already seeping from her number 1 hold and while the Fire Brigade (appliances from 3 counties) searched for 'hot spot', using tug support, it became clear that she had animal feed stowed in her lower holds, this was over-stowed with boxed cans of engine oil which in turn were supporting a number of brand new Honda motorcars. Any upper-deck space was filled by 'containers' each full of canned Cow & Gate babies milk while on top of each there was again a new Honda car. 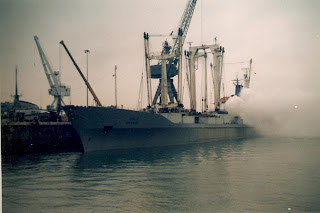 As the picture shows it wasn't long before the situation started to present big problems, as tugs were once again deployed to clear her from the Coaling Pier berth. Unfortunately, it had necessitated the opening of No 1 hatch to investigate the heat source further which wasn't going to help matters! 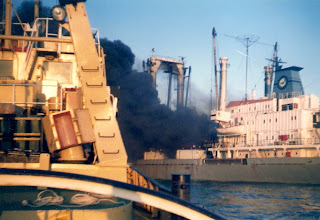 Stern tows were connected forward and aft into the Ebn Magid as the volume of smoke increased dramatically and turned black, as we gently pulled her away from the quayside. 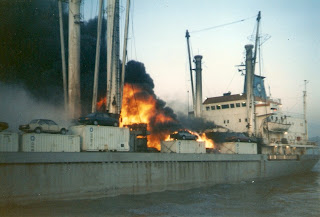 As we rounded the pier head, the fresh westerly wind caught our charge, a 'fire ball' being the result. 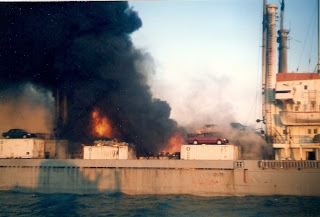 The internal combustion of the animal feed igniting, soon had a knock on effect with the tins of oil which were now exploding like shotgun fire. 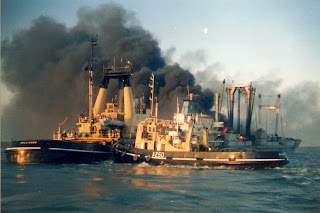 The Ocean Tug 'Rollicker' was now employed to push the Ebn Magid hard aground at W3 shallow anchorage, aided by the tug Sheepdog to keep her 'head to wind. 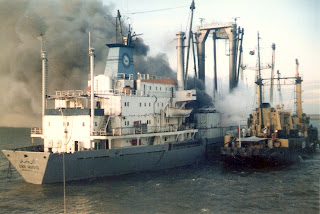 Once aground, the real task of extinguishing the fire was aided by the Mooring & Salvage Vessel 'Kinbrace', secured alongside, providing much higher pumping capacity. 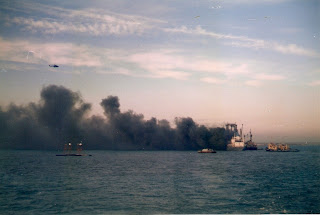 From mid-harbour, with helicopters and surface craft involved, the scene looked grim, and it took 3 full days to get the blaze under complete control and cooled. 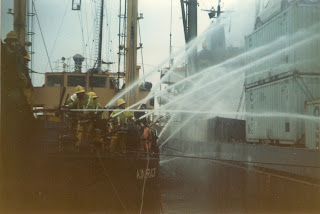 The various Fire Brigades were then transported to the scene, 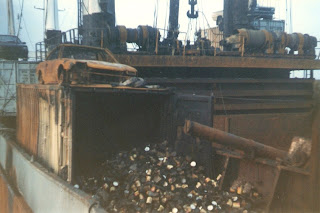 with the full picture only emerging once the heat was overtaken. A container, smashed open and cooled, spews its content of baby milk tins on to the main-deck, while the forlorn Honda looks a little less that roadworthy. 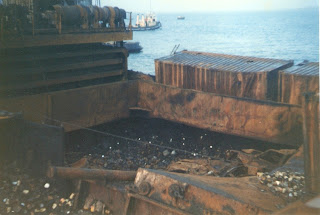 What was a McGregor Hatch, designed to withstand the most ferocious of sea conditions, lies bent like a banana. 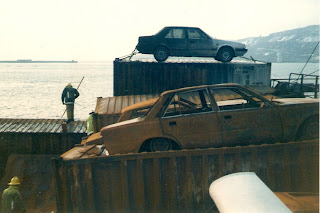 The Brigade look for other 'hot-spots' 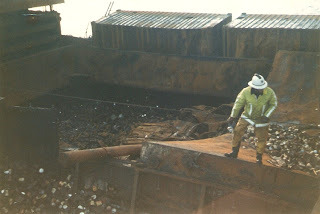 and survey the damage. 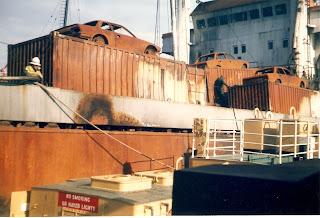 The clearing up operation, especially pumping out the contaminated water (a serious problem) took weeks before the ship was towed to the Breaker's Yard in Wales and the crews claimed their salvage award!

The Captain and Crew of the Ebn Magid were eventually repatriated to Libya grateful to be alive.
Posted by Bagsy at 19:01