Cooper's and Sharp-shinned Hawks have been a bane to me ever since I started 'birding' the USA. The field guide describes the best way to differentiate between the 2 is by the shorter and more squared tail of the latter, but easier said than done when only one or the other is present! While it was perched in a tree and in bad light, this raptor was always going to present identification problems, but looking at the photographs this looks to be more rounded in the tail which also looks long? 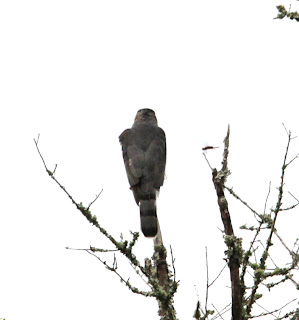 so, here is Cooper's Hawk showing a rounded tail and a view from the 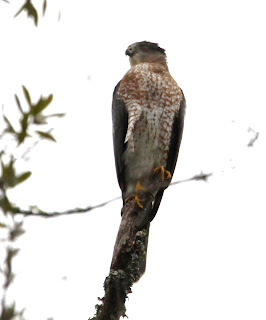 front showing the extent of the tail.

The United States of America

Travel in the USA is about as safe as it can be anywhere in the world, take you 'eye off the ball' and your bag will be gone, but generally all is well. Again a generalisation, the people too are welcoming, kind,hospitable and mostly wanting to talk to those from what they describe as 'Mother England'. One thing, almost throughout, is lack of direction so if you want to know how to get to the Post Office the last person you should ask is a 'taxi driver' or a 'local'. A visit to just about anywhere would be worth it, but it has to be said that the pace of life is less hectic and attitudes much milder the further north and central you get.

Arguably the best way to travel, especially if extensively, with buses in the main reasonably comfortable, at a good temperature, cleaned regularly but be advised about the discipline. The drivers of these vehicles will tolerate no messing about at all and are adequately backed by State and Federal Laws and the Police. On boarding, there is a longish verbal instruction as to the do's and dont's, for instance no alcohol, drugs, firearms, swearing, profanities etc the punishment being instant removal from the bus, wherever it may be with a supporting report sent to the police immediately. Cell phones, music makers and the like are allowed but again in moderation, while after nightfall even the smallest distraction to the driver will be met with disdain. This all makes for a much more comfortable ride and if a passenger makes a genuine complain to the driver, he / she is duty bound to investigate and sort out the problem to the customers satisfaction.

If you anticipate long distance travel, value for money is guaranteed, with a 15 days Greyhound Discovery Pass costing just £255. This pass is not restricted only to that 'line', but to most major carriers throughout the land including much of Canada and Mexico's California Baja and as far south as Chihuahua. Be diligent on arrival that the correct document (The Voucher) is issued for the papers issued in UK as incorrect issue can lead to serious delays. It is my intention to work out my personal distance travelled and if the relevant fares are available on the Greyhound website, total just how much my journeys would have cost on an 'at thecounter' price - don't hold your breath!

Finally, there are good numbers of Supermarkets where quality, healthy food can be purchased, but these are NOT on the regular coach routes and stops. Here it is wall to wall junk, with only the very occasional apple or banana being available. Not expensive, you can eat for just a few dollars at each stop, but in the main it is burgers, chicken, tacos and fries.
Posted by Bagsy at 17:54