All The Leaves Are Brown, and The Sky Is Grey - Mamas & Papas

While the sky was completely overcast and the temperature continued to fall as I left home this morning at 07-30, the wind had dropped and there was altogether a better feel to the day. By 09-00 much of the cloud had disappeared, making way for some prolonged periods of sunshine and generally warming things up a bit.

Apart from the arrival, or maybe appearance from cover, of a small flock of c11 Long-tailed Tits things were much the same in the cemetery so hurried on across the road to Radipole. There, both Water Rail and Cetti's Warbler were vocal and in short time this years breeding male Marsh Harrier put in an appearance. 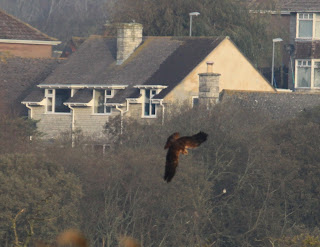 Distant but discernible shot of the male Marsh Harrier 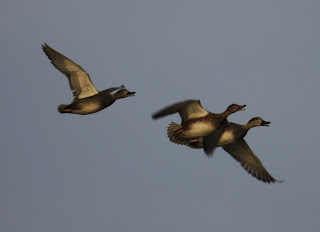 This small group of Gadwall seemed a little unnerved by the presence of the raptor, but the few 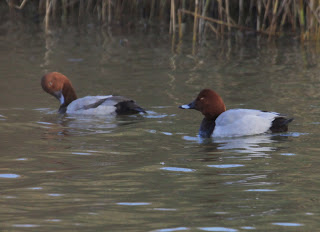 Pochard on the other side of the lake seemed untroubled.

On the Wader front, Green Sandpiper, Common Snipe and Lapwing,all as singles and all in flight put in brief appearances, while later the Snipe tally rose to double figures. 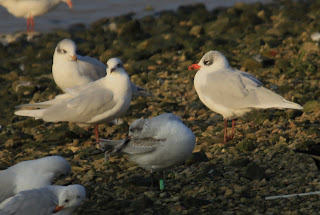 A number of Mediterranean Gulls were on the shingle island outside of the Visitor's Centre in company with a few Common Gulls, a couple of Shelduck and the |Hooded Merganser, always nice to see.

At Ferrybridge the Brent Geese were there again in good numbers, as were several Red-breasted Merganser, a couple of Little Grebes plus c4 Little Egrets. Waders were once again at a premium with only c6 Ringed Plover, c3 Dunlin and c2 Oystercatchers being noted. 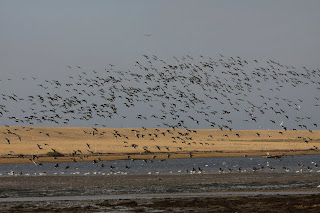 Brent Geese a few images of birds both 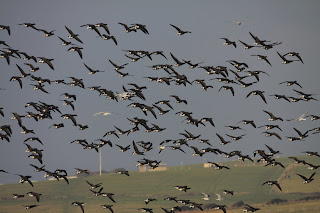 in flight (a 'skein' of Geese) and 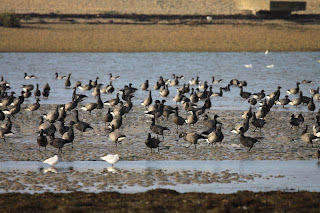 There were also a good number of Mediterranean Gulls here too, and while not counted a guesstimate would be in the high tens?

Walking through the Top Fields a Common Snipe was flushed, while c22 Skylark flew, seemingly off the sea, to the north. Despite the slow wind down of bird numbers as we head further into winter, the staff at the Observatory have been given little respite in a year when 'records' have tumbled in all directions. Of these, the number of 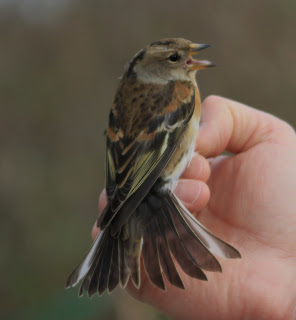 Brambling (this one a female) have far exceeded the the highest annual ringing total for this species, while 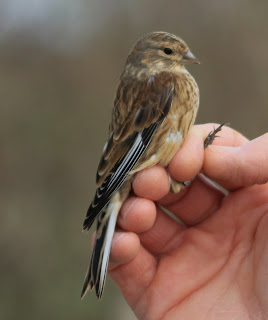 Linnet (a male shown) continue to thrive overwinter in the carefully managed and sown fields adjacent to the Obs. 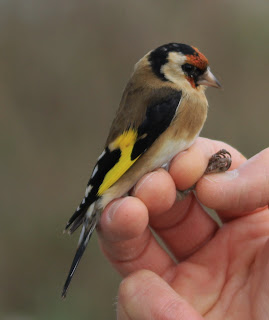 Goldfinch are also numerous at the Bill and I know final tallies will be shown in the end of year report. On my way home, a Water Rail was 'calling' loudly from the sanctuary of Culverwell and later at Sweethill c5 Redwing flew over and to the north. 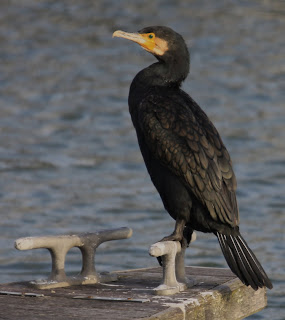 These 2 Cormorants were posing on the catwalks 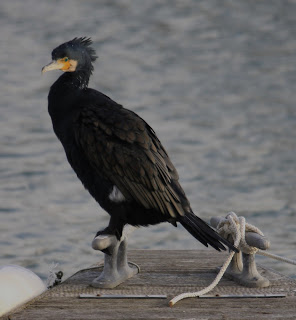 in the Weymouth Marina, and after a pint in The Swan I headed home - good day!
Posted by Bagsy at 19:31