Dedicated to the Life & Works of Miss Helen Brotherton

So, we now know were all the mid-week Chiffchaffs from the cemetery ended up, in the redundant railway cutting at the bottom end of Wakeham!

With clouds still full of rain and the wind now seeming firmly in the eastern quadrant, it's not surprising the forecasters are predicting a 'cold snap' next week. However, for today the precipitation failed to materialise and I was once again in the graveyard at 07-30 but unfortunately the birds were not. Deciding to give Ferrybridge a miss until later, as the bus steamed past the sight of well in excess of 1,000 Brent Geese settled on the foreshore had me kicking myself. A wander across the Top Fields and onward to the West Cliff soon produced this 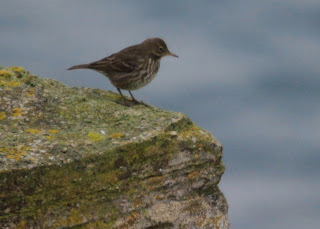 Rock Pipit and a familiar 'charter boat', tucked under the lee of the cliff on the Plaice beds, 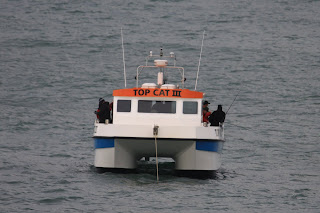 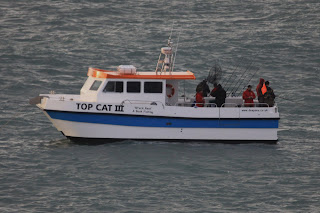 The only black man ever to have won the title 'Mister Portland', Ivan has been great company and a firm friend to both myself and my daughter Lisa for many a year - hope your reading this one Lisa! Continuing along the cliff I was surprised to see 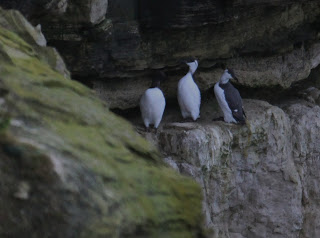 Guillemots back in residence, but was later informed that this is usual. Less unexpected were both 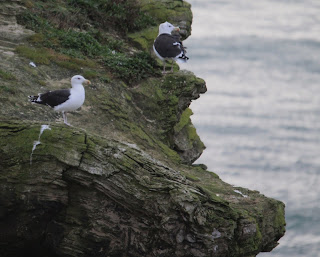 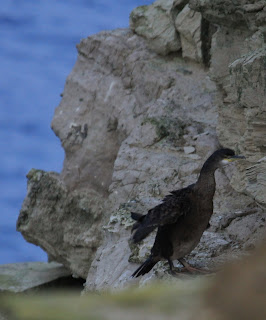 Shag along with a number of 'shore-side anglers', some more adventurous than others, 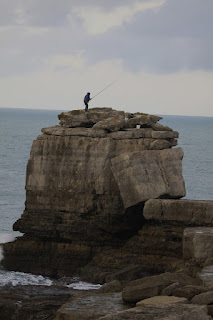 such as this fella atop the Pulpit Rock. It was of note that between all of the fishermen there wasn't a sign of a 'tight line'. Continuing to 'The Bill', in search of Purple Sandpiper, I failed in the attempt but as I crossed the Bill Common a usual gathering of mixed Gulls, these being 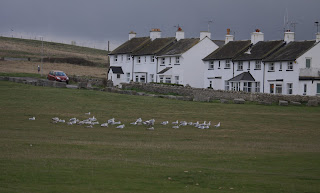 Great Black-backed and Herring, were seen resting adjacent to the Coast Guard Cottages. 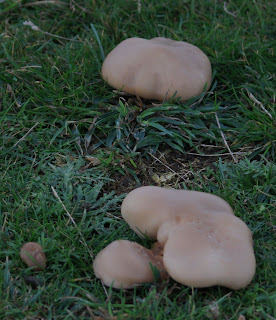 There was also a mass of fungi to be seen, but this Prog Rocker has no idea of identification, but I know a Punk who does! 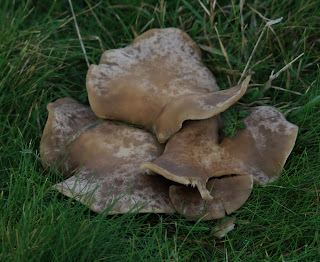 Much of this fungus has always grown here in almost perfect circles reminding me that when my 2 girls were just children there was no difficulty in convincing them that these were home to 'Fairies'. We waited on many a day for them to appear, but like the Purple Sands today I'm still waiting! 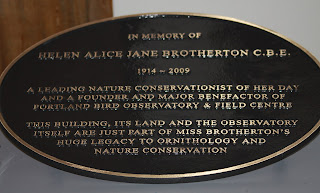 This is the fine commemorative plaque 'struck' to commemorate the life and times of Miss Brotherton who sadly passed away last year. A remarkable lady who was, in a nutshell, well ahead of her time and always a fascinating conversationalist - RIP.

Alone in the Observatory lounge, and barely one bite into my corned beef bun, I answered the telephone to find fellow birder Peter Saunders reporting the presence of a Pallas's Warbler along the cutting of the redundant Weymouth to Portland railway line. Fortunately, this coincided with the ending of a meeting of the Observatory Committee so along with the Warden Martin Cade, Edwin Welland and John Lucas we headed off in pursuit. Others had already arrived and in short time the bird was relocated, among a fairly large feeding flock of other small birds, and seen reasonably well by all. The flock consisted of at least 2 dozen Long-tailed Tits, Blue & Great Tits, numerous Goldcrest plus c2 Firecrest, and this is where the Chiffchaffs were. At least c8 in one bush alone while goodness knows how many others elsewhere, but none of these birds were allowing me a photo shoot. Those with far sharper reactions were successful in this, and these 2 photographs of 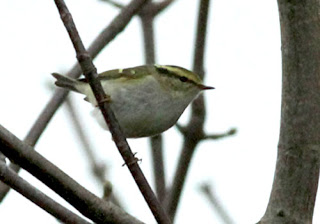 Pallas's Warbler (today's bird) are published with the kind permission of the © holder Martin Cade. 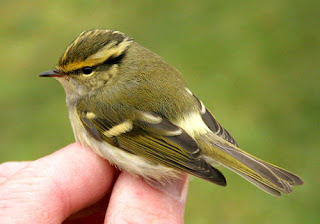 This Pallas's Warbler was capture in a mist net at the Observatory a couple of weeks ago, one of three trapped there.

I returned to Weston, and the bus home, in the company of Graham Walbridge via a path I have not walked for years. Along the way I was able to view more Portland history familiar to my children. 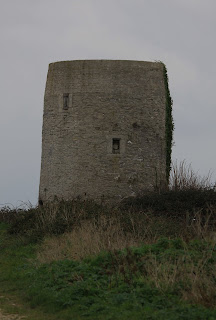 Portland's Windmills are the two great remaining ancient buildings in the Royal Manor. First recorded in the Land Revenue Accounts of 1608, they were probably over a century old by then. They were owned by the Pearce family from the 1600s to the 1899, and according to historian Richard Crumbleholme relief was given to the millers in the early 1700s for earthquake damage. 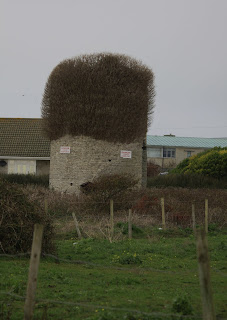 By the 1960s no attempt had been made to preserve these shells and the main shaft of one is still in tact and now in the Portland museum. Since, the structures have suffered at the hands of vandals but the authorities don't improve the situation with badly placed signs. Locals now consider this, the most northerly of the pair, to be sporting a Beatle's haircut!
A male Snow Bunting had been seen along this track earlier in the day, but unfortunately there was no sign of it later. 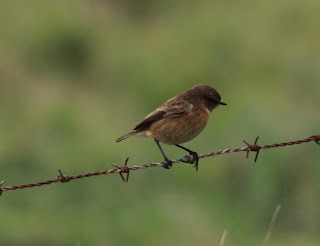 This female Stonechat did put in a brief appearance as dozens of Pied Wagtail fed in nearby horse paddocks.
If you are interested in viewing some serious wildlife photographs, or simply keeping abreast of all the natural daily happenings on the Island, you can do no better than visit:-
www.portlandbirdobs.org.uk
Posted by Bagsy at 17:18