the 7 days of Winter when storms don't occur

c34 Wigeon flying over the house first thing this morning was indeed a good omen, and with a further c11 over the cemetery, my first record at that site, endorsed it! 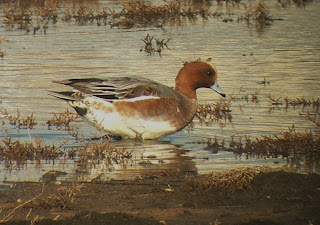 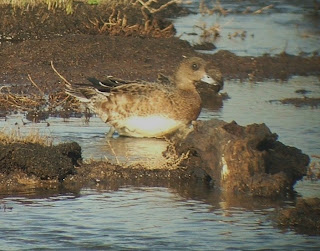 Crossing the bye-pass to reach Radipole Lake I came across Nick Thomlinson and Bob Ford who were, despite Nick and my difference, intent on getting me to see their early morning find. There cannot be, I suggest, any such thing as a bad photograph of an Otter in Dorset as there must only be few or none in existence, so these from this morning are pleasing to say the least. 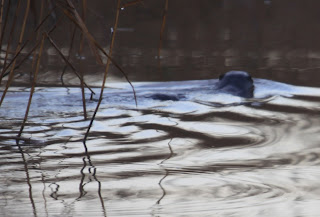 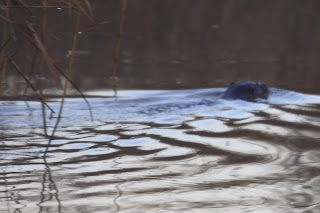 The first I have seen in England, let alone my home county, this really was a moment to savour as we watched the animal's movement and 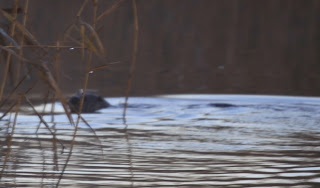 predicting its track to gain these images.

Ferrybirdge was once again littered with Brent Geese, but on closer inspection estimated to be holding just 50% of yesterday's total. However, the difference today was that along with a number of Pale-bellied individuals, finally I got to see one of the Black Brant. As a couple of other 'birders' were going to take a look in Portland Harbour, there was surely no harm in joining them and what good luck I did, as the first bird we saw was this 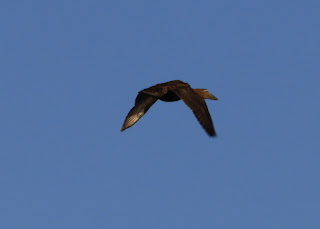 Eider. Fast flying and gone in seconds I was lucky to get half a dozen shot which are the first for this species in Dorset. Elsewhere, I have been more luck as on both the Buchan Alpha oil rig and the River Ythan in Aberdeenshire these bulky Ducks are common and annual. 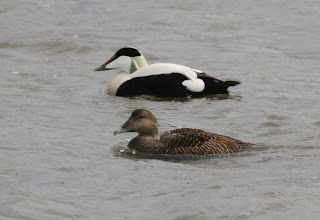 Male (top) and female Eider on the River Ythan. 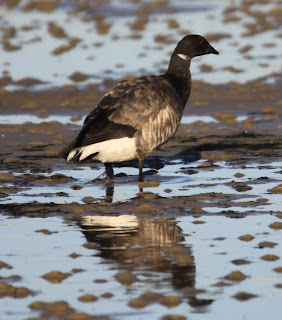 As I crossed the foreshore, as the tide receded this Brent Goose, looking a little sickly, allowed fairly close approach so why squander the moment? 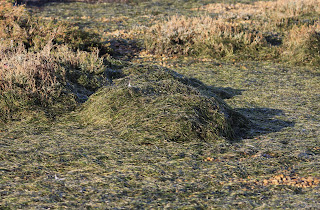 While at the Chesil side there were piles of Zostera or Marine Eelgrass which is the object of desire for the Brent Geese here. 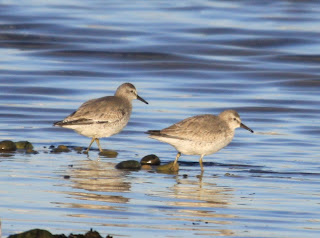 Among the 100 or so Dunlin there were these c2 Knot 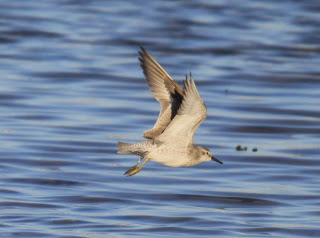 which didn't hang around to take any pictures of me. 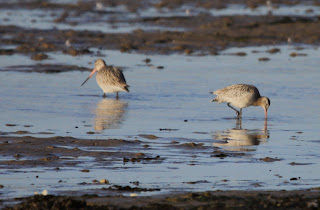 In addition there were also c2 Bar-tailed Godwit 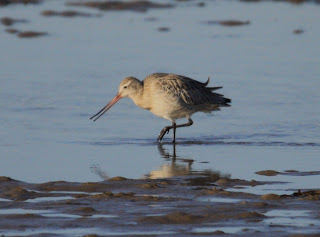 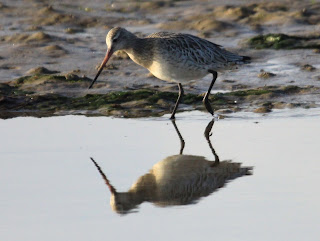 far less nervy than the Knot. 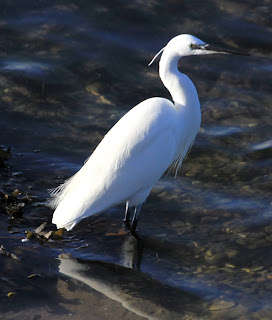 This Little Egret also presented an opportunity for a photograph, while in addition to those already mentioned, there were c5 Little Grebe, Grey Plover, Redshank and Red-breasted Merganser to enjoy.

On the verge of leaving for the Bill, a phone call from Daragh alerted me to a Red-breasted Goose on Lodmoor, so it was a bus ride to Weymouth and then a walk to the moor. On the way I encountered 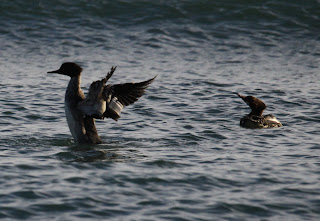 c7 female Goosander, and there were also c2 Black-necked Grebe and a single Great Crested Grebe in Weymouth Bay. 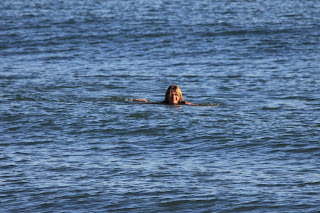 There was also another rather unusual bird, swimming (yes swimming) in this weather, rather her than me! 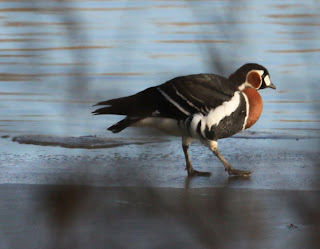 The Red-breasted Goose had kindly awaited my arrival by which time many of the local birding fraternity and a few visitors had seen it, 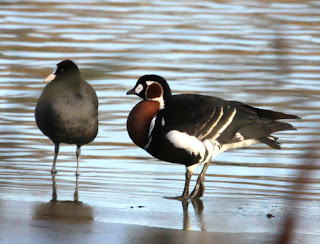 with the predictable conjecture as to its provenance having broken out. 'Plastic' is the term used to describe any bird that might be considered to be an escapee or other dubious origin, so with many kept in captivity in the UK and this being such a rare occurrence, yes you guessed! 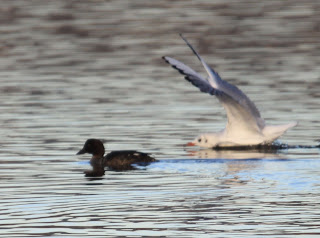 Finally, my last bit of good fortune today while returning to the road, I found this female Goldeneye close to the viewing platform I dub Edward's Folly. Hope to be with you again tomorrow.
Posted by Bagsy at 19:16