The weather has been 'changeable' today starting with moderate snowfall, as I got up at 06-00, which increased as daylight showed, then changed to light rain. The next change came as the light rain turned heavy and instead of washing away the snow, it formed a sheen on top making it about as slippery as it gets. The final changes came late afternoon as temperatures started to fall making it icy and again it changed to light rain.

However, being a gentleman of leisure and with only one pressing appointment early morning, I took the opportunity to get all the things I might need over the Christmas period in a oner, a packet of sausages and a bag of cheese & onion crisps! On the plus side, the weather seemed to have deterred many as the shops were all but empty, so a quick return home also gave me time to do some preparations for tomorrow's dinner party.
With no birding to report, except for a male Blackcap that visited neighbouring trees, I once again return to the archive and post a few photos from a trip to Vietnam and Cambodia some years ago now. Having travelled from Bangkok, Thailand to Hanoi we took the Re-unification (Express) Railway down almost the full length of the country to Ho Chi Minh City (now Saigon) where we took in the 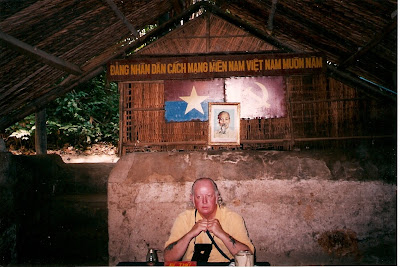 Viet Minh Museum, once the head quarters of Uncle Ho's army, and had tea where the man himself had once sat. 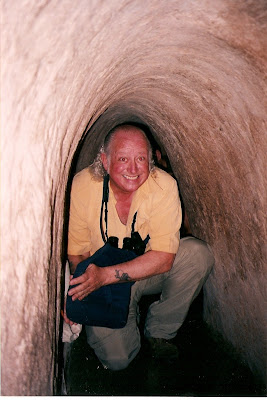 Later we crawled the famous tunnels, and despite having been both a Submariner and a Diver this was the first and only time I have every experienced claustrophobia. Yes, that is a worried look on my face. 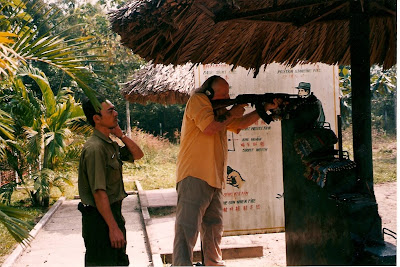 A chance to fire a number of firearms was open to us, and during the day we experienced firing a Kalashnikov, an AK47 and an M1 Carbine. 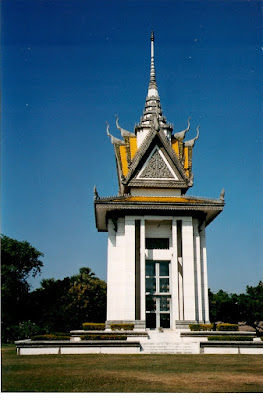 Just outside of the Cambodian capital Phnom Penh, are what became known to the world as 'The Killing Fields' a legacy left by the tyrannical Saloth Sar, better known as Pol Pot. The building in the photo holds the bones (mainly sculls) of many of the victims of the Khmer Rouge Regime. 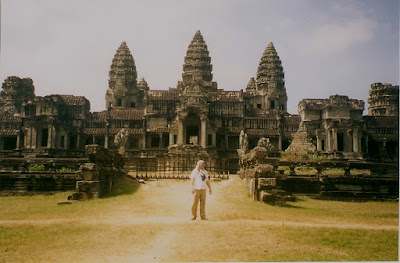 Taking a 'long-fin' boat up the Mekong we arrived at Angkor Wat a temple complex covering some 75 square mile, much of it still to be uncovered. This has for all these years been the most magnificent 'man made' structure I have ever seen. 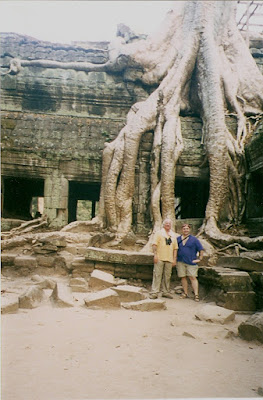 These giant root stock are synonymous with the region and in some cases hold many of the buildings together. PS it's not all roots, me and Billy Crumble are there as well if you look closely!
and to end, 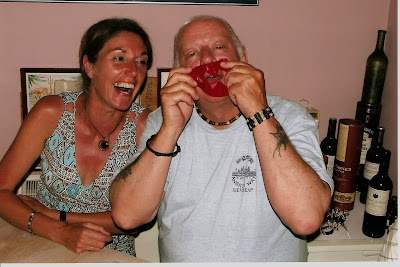 this is me and the lovely Tracy Baker (no relation) at a party some time ago. There is another party this evening to celebrate her birthday, so must away and put on my finest - manana!

A Very Happy Birthday Tracy, We'll be There To Make Sure It Is!
PPS - just noticed, coincidentally I have my Angkor Wat tee-shirt on.
Posted by Bagsy at 17:15