On The Road Again - Canned Heat 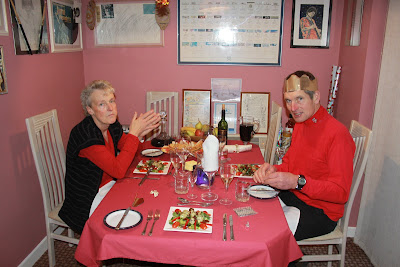 It was a real pleasure to have my friends Hugh and Janet over from Parley Green last night to dinner. Not as alcohol fueled as the previous evening, we did however sink a bottle or 2 especially a unanimous favourite, to complement the bread and butter pudding, a Brown Brothers 2009 Orange Muscat & Flora. Amid lots of joking and frivolity, the best moment was when Hugh asked me what the main course was to be. A recipe given to me by Jim the Medic & Liz which they told me went under the heading of Spanish Chicken. Quick as you like Hugh replied, well in your case it ought to be called 'Cock of the Rioja', that being a terrific pun on this birds name 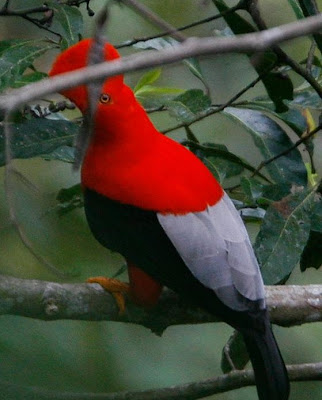 which is the (Andean) Cock of the Rock - I think we'd better patent that Hugh.

It was also good to get out on the trail again today despite the cold and hazardous walking conditions, all of the footpaths across Radipole were like sheets of glass. Several Redwing , Blackbird and Song Thrush plus singles of Coal Tit, Sparrowhawk and Great Spotted Woodpecker had already been encountered in the cemetery, while around the lake there were many more of the same. In addition there were a few Lapwing and Skylark flying north as 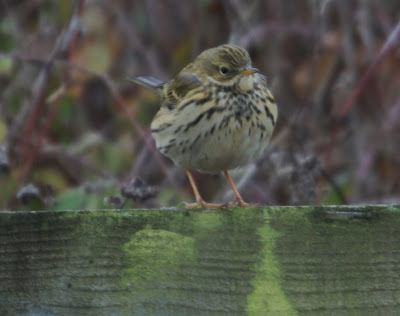 Meadow Pipits resorted to hunting for food in private gardens along the way. Only one Water Rail was seen with several others squealing from the reed beds, along with vocal Bearded Tits and Reed Buntings with Common Snipe being represented by c3 overflying birds. 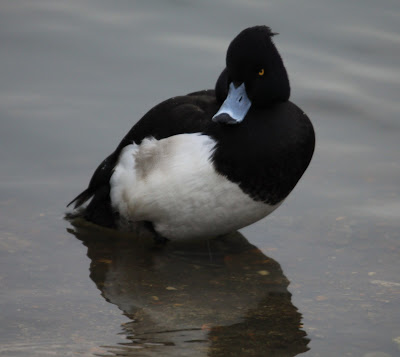 This sultry looking male Tufted Duck seemed to be posing for a shot, after which 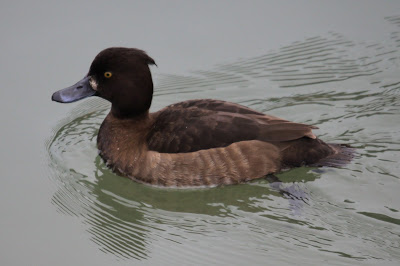 it would have been difficult to leave the (a) female out of the picture.

At Ferrybridge things turned dramatically colder as I was now in the full force of the north easterly wind, making for fairly unpleasant viewing. Numbers of Red-breasted Merganser in the area of Small Mouth seemed to have increased during my absent 2 days, while among the Dunlin, Ringed Plover and Turnstones there were c2 each of Curlew and Oystercatcher plus single Bar-tailed Godwit and Knot. 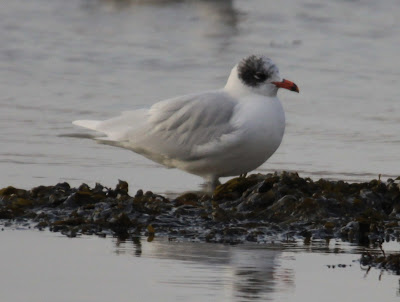 Mediterranean Gull was represented by a minimum of 100, and there was also Bob Ford with his group of stalwart observers who I was invited to join for the journey over to Portland. On the grass roadside verges at Victoria Square there were at least c8 Golden Plover, plus probably as many Lapwing while in the garden of Portland Castle there were a few Redwing and Blackbirds but both outnumbered by 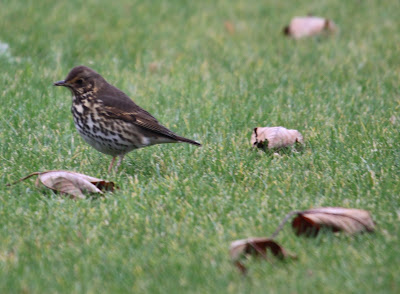 Song Thrushes. Before leaving this 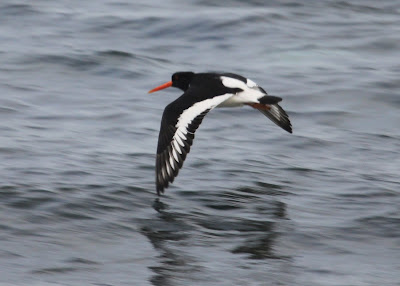 Oystercatcher flew past and a pair of Red-breasted Merganser left their perch on the sewer pipe to distance themselves from us. Before reaching the Observatory we could see the sky, not to mention the fields, were full of birds with both Lapwing and 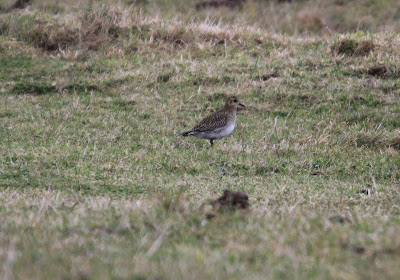 Golden Plover being in three figure counts, Skylarks in dozens with small numbers of Common Snipe. There was also reports of a couple of Woodcock plus a Jack Snipe which unfortunately I didn't see, but the key bird for me was a 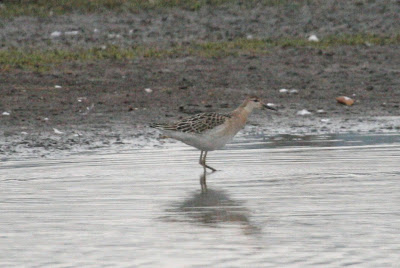 Ruff that had lingered from yesterday. This photo is from the archive as I was unable to get anywhere near today's bird. 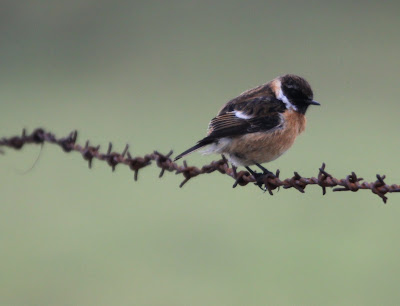 Finally, before setting out for home, it was good to see a pair of Stonechat which had obviously survived the winter thus far.

Walking along the Weymouth Inner Harbour, it was interesting to note the increase in numbers of some water birds such as these 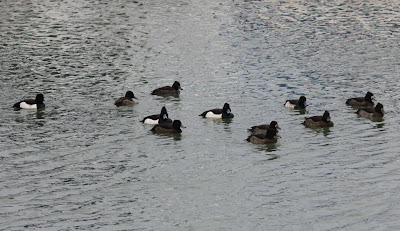 Tufted Ducks which rarely venture this side of Westham Bridge, whereas 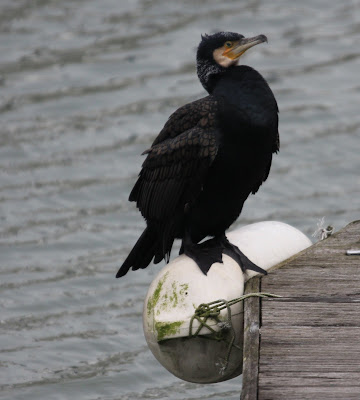 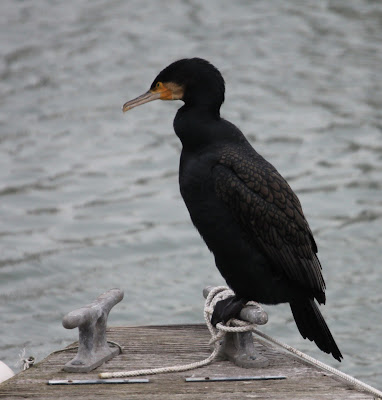 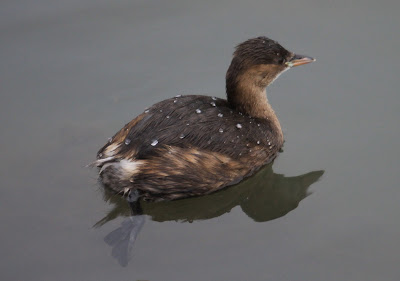 This Little Grebe was so close to the road 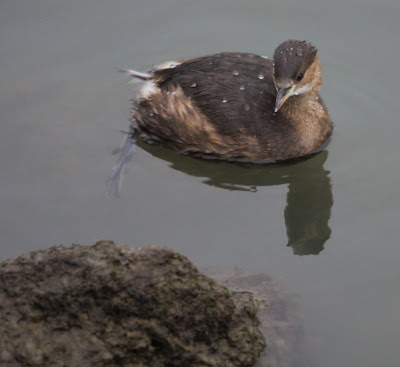 that once again it was difficult not to rattle off a couple of shots. 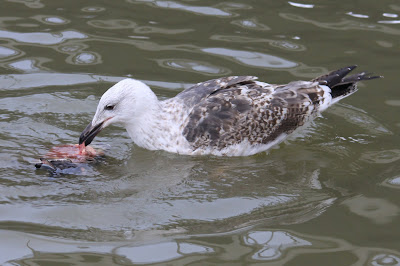 Crossing Radipole again it was noticed that this immature Great Black-backed Gull had found good fortune among the Tufted Ducks too. Whether it had killed the hapless Duck of found it dead is not known, but it was sure as hell enjoying the feed! 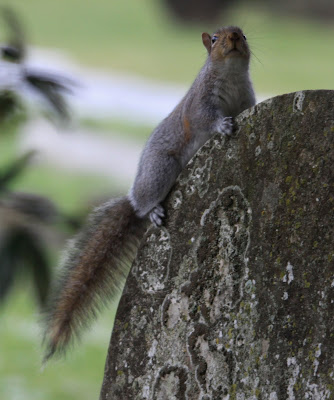 Grey Squirrel (back in the cemetery) wasn't the only mammal photographed today, as Brown Rat had also succumbed to the camera but the shots were poor and not worth posting.
Returning to last night, Hugh and Janet were thinking that Argentina / Brazil and particularly the Iguazu Falls may form part of one of their next trips. Here then are a few shot from 2006 when my ex-boss Mike Hughes and I ventured that way. We approached from the (recommended) Brazilian side having landed in Sao Paulo, with a connecting flight south to Curitiba taking in the Atlantic Rain Forest train ride to Managua on the way. This route is advised as the first view of the 'falls' is a panorama, in oppose to the Argentine side (which you can easily do the next day) where you are able to walk virtually under the cascades via catwalks. 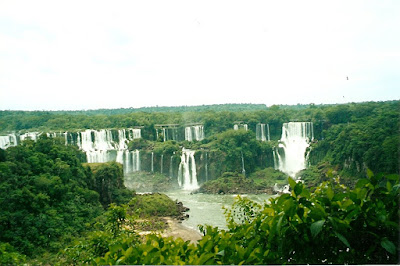 Iguazu is the most extensive waterfall in the world, comprising 275 separate cascades and covers an area of nearly 2 miles. 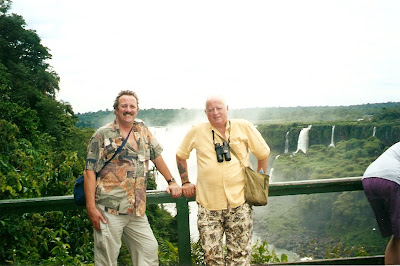 These first 2 shots show the panorama, noted above, which has to be one of THE natural views in the world. 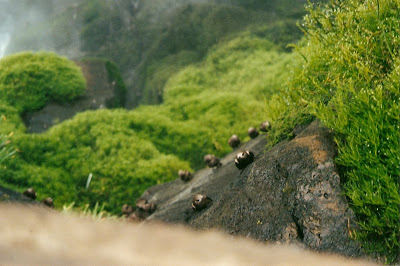 Looking over the cliffs into the mossy, wet chasms one of the specialist birds of this are can be seen - Great Dusky Swift. 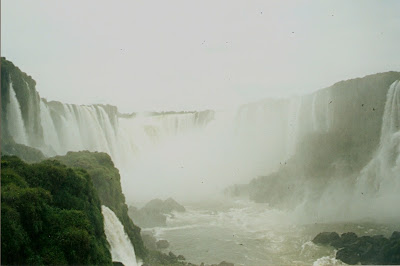 On the Argentine side you get down to 'river level' (a closer look at this image will reveal the Swifts flying around. 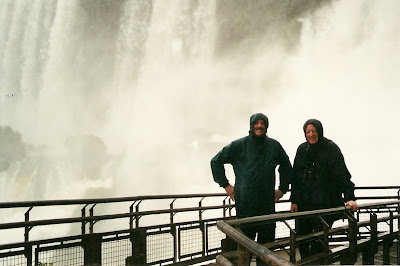 While on the catwalks you'll need an umbrella at the very least!
Posted by Bagsy at 18:21