With weather conditions just about perfect, considering the time of year, what better way to set out on the long awaited New Years Day Twitch. Complete cloud cover but a reasonably clear atmosphere, wind little more than a zephyr, from the west not east as predicted, and little or no sigh of precipitation I 'kicked off at 05-30 as planned. The idea was to make a short stop at Radipole, just to get a few species in the book to keep up moral, then zoom of a little in land and quickly 'tick' the 3 most common Owls by listening for their 'calls'. The first part went almost like a dream, except I didn't see the expected Hooded Merganser, but starting with Coot, Mute Swan, Tufted Duck, Moorhen, Water Rail*, Shelduck, Black-headed Gull plus the sound of both Robin & Redwing (later also seen) all hit the log in quick succession. An * denotes a species that was only 'heard' on the day.

For the next hour I patrolled the Coombe Valley, Came Wood, Poxwell to Broadmayne areas, north of Weymouth, in a vain search for the wretched Owls but it wasn't until Warmwell a few more miles on that a Tawny Owl was heard (another 'seen' later at Arne) above the crowing of 2 Cockerels in a nearby farmyard. 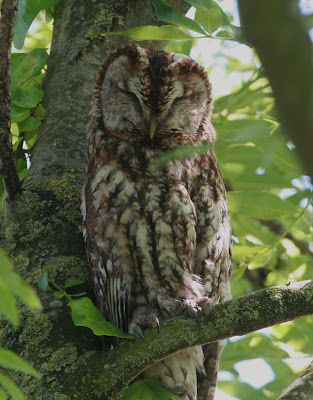 Blackbird was the only addition between there and a traditional Woodcock roost at Soldiers road, some distance away, but once there, stationed on a hillock for best all round view, Herring Gull, Carrion Crow, Song Thrush, Wren, Canada Geese, Curlew, Chaffinch, Siskin, Fieldfare, Teal and even a calling Common Buzzard were seen or heard in the fast fading dark. 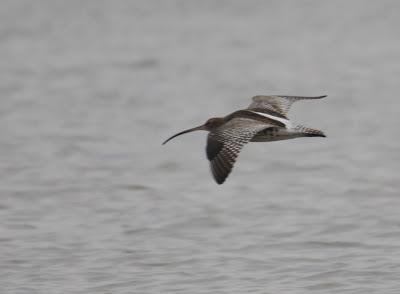 At Arne, the success rate improved 10 fold as it is rare to bag nearly all the common woodland birds at the same site. Nuthatch was first, followed by Blue, Great, Coal and Long-tailed Tits, Jackdaw, Great Spotted & Green Woodpecker, Goldcrest and no less than c3 Treecreepers all feeding together. 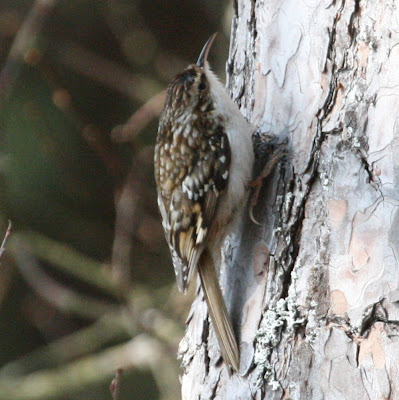 It was then I met Tony Conway, fellow 'birder' and long standing friend, who pointed me in the direction of the roosting Tawny Owl, and as if in repayment I quickly located a Firecrest on call which about half a dozen of us managed to see. It was time to crack on, but immediately leaving the car park a Marsh Tit was heard and soon located. 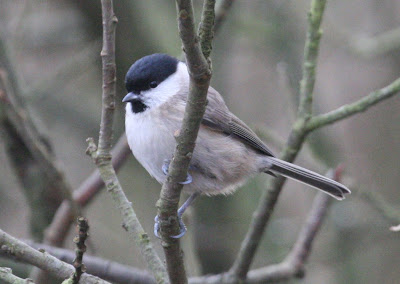 The next planned stop was the 'hide' at Middlebere where, if my calculations were right, it would be low tide giving prospect to a host of things. On the way Magpie, Starling, Meadow Pipit, Dunnock and Raven (8) were notched up, whilst from the hide Avocet, Grey Plover, Wigeon, Lapwing, Dunlin & Redshank were present in good numbers, there were were a few Shoveler and Black-tailed Godwit and singles of Brent Goose, Spotted Redshank, Reed Bunting, Grey Heron and a Jay just outside of the door as I left.

On the way back to the main road, Skylark, Greenfinch plus Dartford Warbler* were logged, as were Pheasant, Yellow Hammer, House Sparrow and Rook before arriving at Studland. Things took a severe nose dive there as a number of Waterfowl, reported in good number over previous days, simply couldn't be found. All that were booked included Oystercatcher plus Great Crested & Little Grebes. Continuing to cover the vast rim of the second largest natural harbour in the world (after Sydney, Australia) I arrived at The Littlesea where Gadwall, Pochard, Pintail, Goldeneye, Goosander along with Great Black-backed & Common Gulls were noted, while between there and the chain ferry Greenshank, Knot, Sanderling and Red-breasted Merganser were also added. 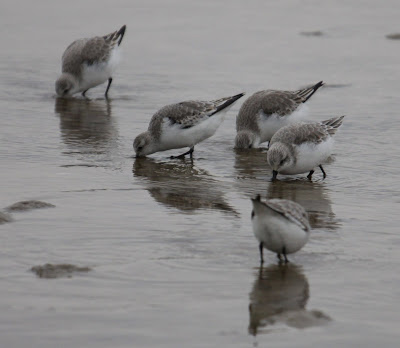 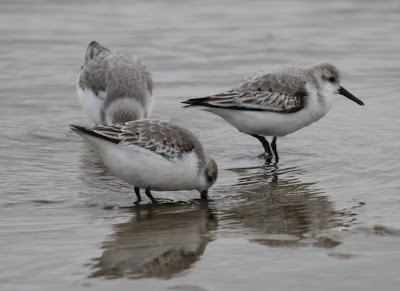 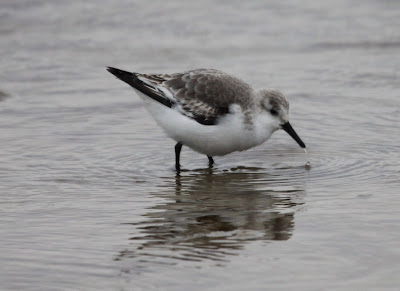 where there were probably as many as a dozen?

From the Studland side the ferry runs to Sandbanks, which at the last count was the most expensive 'real estate' in the world, but for all its star-studded quality all it produced was Cormorant and Shag. So, on to Evening Hill from where it is possible, with a telescope, to view the lagoon on Brownsea Island, the home and foundation of the Boy Scout movement. Spoonbill was the target there, but again drew a 'blank', but the adjoining fore-shore had produced Bar-tailed Godwit, Mediterranean Gull, Turnstone, Rock Pipit and Pied Wagtail - the numbers were now clocking up! 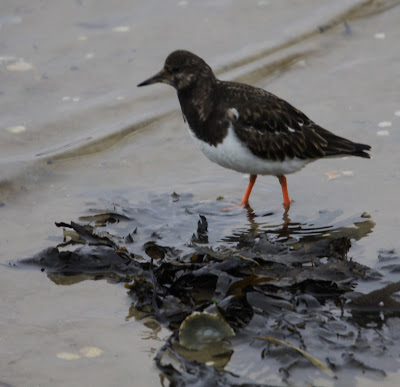 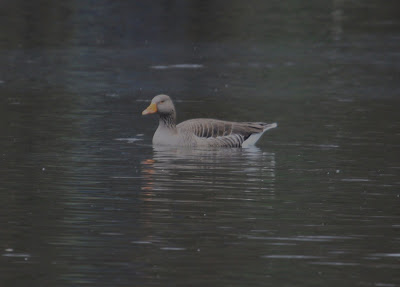 Greylag Goose was next to be added, along with Feral Pigeon but I am sworn to secrecy of the location as we don't want hundreds of people arriving and 'flushing' them out of Poole Park.

The only Collared Dove of the day was seen in transit to the Tincleton watercress beds where a Green Sandpiper took to the air immediately, while down the road at the sister 'beds' there was a single Grey Wagtail but nothing else!

Lodmoor, the next stop, was for a proper 'twitch' as the Long-billed Dowitcher (an uncommon American vagrant) had remained there into the new Year. A new species for my ongoing Dorset/January List (getting exciting isn't it?), it was soon bagged along with Common Snipe, but no time to look for the reported Ruff. Quickly on to Radipole where only 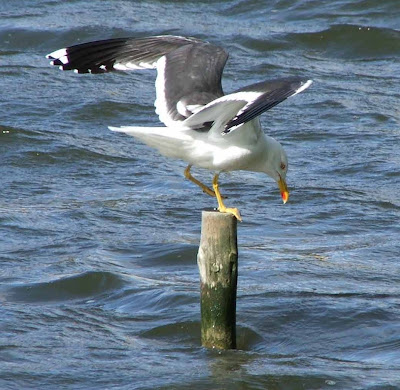 Lesser Black-backed Gull was added, before Portland the final destination where Guillemot and Gannet joined the others while the approach of a charming couple from Reading alerted me to a passing 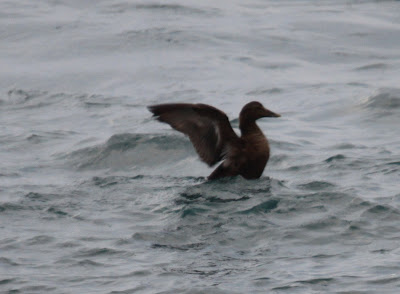 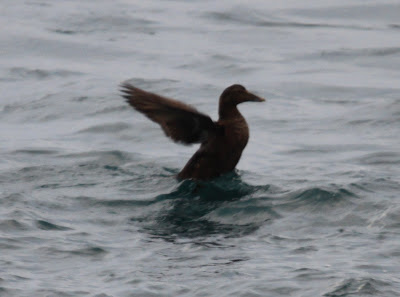 with the tide while preening. I had already looked for the 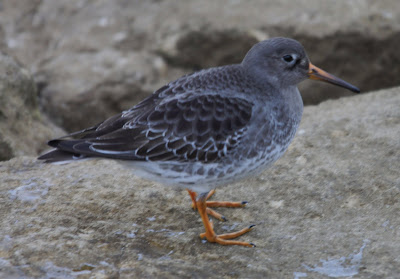 Purple Sandpipers, to no avail, and it was the same gentleman 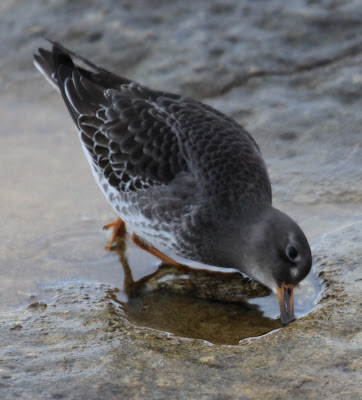