We start today by returning to yesterday for an amendment plus a couple of new items. Firstly, while writing up my 'fair log' and committing my records to the computer, I discovered that both Mallard (one of the first birds seen) and Ringed Plover (Ferrybridge) had been omitted from the day tally. That means the total for the first day and year stood at 98.
Following that, my friend Dave Penney also took to a days 'birding' part of which was taking this photo of a 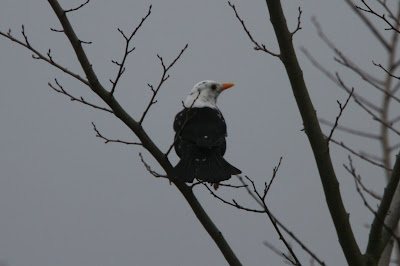 part albino Blackbird (unless any one supports my theory that it is in fact a White-headed Vanga, though somehow I doubt we'll get away with that) on his local patch on the outskirts of Northampton.

As previously noted, the year ended with the Central American country of Honduras joining the readership on the very last afternoon. Maybe to welcome in the New Year,

the People's Republic of China also signed in after publication last nights post. Readers may remember the request to pass this Blog Link on to ALL family and friends, but with an estimated population of 1.33 Billion (2009) China could almost double the readership on its own?
Nevertheless, we extend a huge welcome to China and please pass the link on.
Weather wise, today started in a similar way to yesterday, except there had been a couple of outbreaks of rain overnight and a noticeable drop temperature, as did the 'birding'. Again, 06-00 found me prowling the Came Wood / Coombe Valley / Broadmayne area in search of Barn Owl but in similar fashion drew a blank. There followed a moment of indecision, whether to head east or west with good prospects in either direction, but continued by driving slowly toward the village of Poxwell (east). Just before entering the hamlet, a Woodcock put up from the roadside grass verge, flying at eye-level for about 10seconds before dropping into the adjacent field, which was the first 'year tick' of the day.

Bestwall, a vast expanse of water meadows, reed beds and flooded old quarry workings just outside of the town of Wareham, had thrown up a number of good species over the past few days so was well worth a try and almost immediately notched up the 100th species for the year as c2 Peregrines were seen tussling with a Sparrowhawk - number 101. Bullfinch, Goldfinch and Stock Dove quickly followed, but there was no sign of a much hoped for Harrier, Smew or even a Water Pipit. Instead, White-fronted Goose was the next list addition, in fact c19 of them feeding in the meadows. Like the Woodcock, I have no idea when the last ones were seen in Dorset but it must be a couple of decades at least. 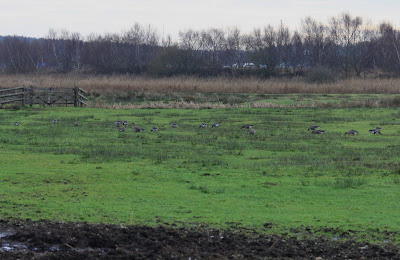 of the Eurasian sub-species 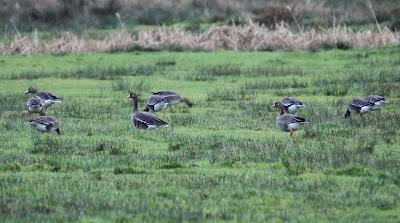 in oppose to the Greenland variety 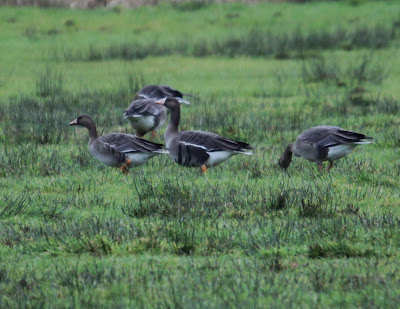 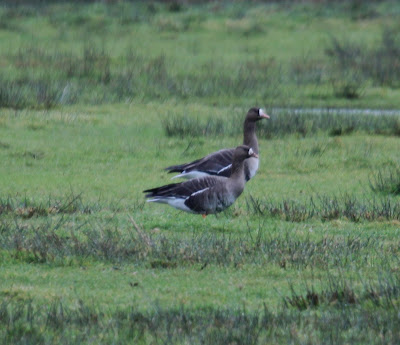 but I found it magical to see such birds once again!

From there it was decided to try for the Great grey Shrike at Coombe Heath, Arne which is also on the perimeter of Wareham, which didn't take too long to find albeit at quite a distance. Time then to start heading back west to utilise every moment of daylight, in these all too short days, with a short stop at Waddock Cross where a Common Buzzard had either killed of found dead a Crow of sorts which it was now devouring right in the middle of one of the watercress beds. However, the highlight of this supposed brief stop was once again encountering Mr Charles Barter the Managing Director of the site, who I first encountered what must be nearer 4 decades ago. The cress beds have always been an enormous attraction to birds, especially in the winter, and having always believed in asking (as they can always say no) approached Mr Barter all those years ago to seek his permission to bird watch on his property. A kindly man, we have met on a couple of occasions since, I made a short detour to wish him Happy New Year and thank him for his kindness over the years - thanks again Charles!

Via Monkey's Jump and Golden Plover, my track then led me past 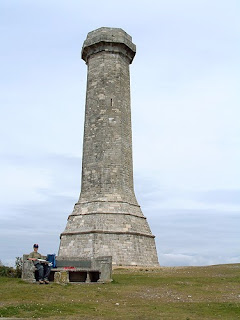 Hardy's Monument and through the back road to Abbotsbury. Known as White Road, the track is only one vehicle wide but looks across a stunning valley over the whole of Weymouth Bay, Portland and most of Chesil Beach and the Fleet. It was half way down the steep incline, with two other cars behind me, that I spotted what looked like a huge Lapwing, lopping across the valley, which was in fact an 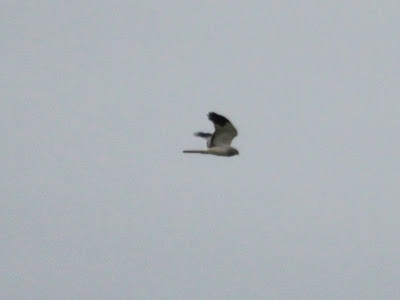 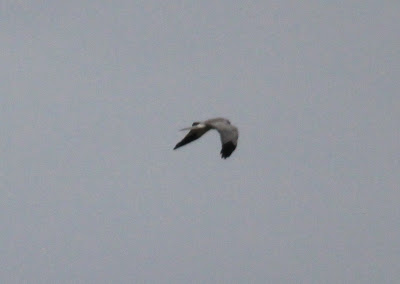 much to the disgust of those following 'line astern' I swerved into a most convenient 'passing place', dashed across the road and rattled off a couple of shots. Not brilliant, agreed but enough to tell the story! The reason for coming this way will soon be apparent, but being so close Abbotsbury Beach (part of the Chesil) was always going to be worth a look, and there added 3 more species to the list by way of Velvet & Common Scoter plus c2 the c6 Red-throated Divers, the day was becoming very good. 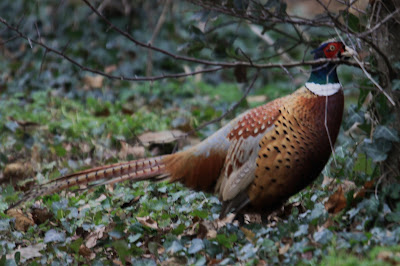 In my search, which was now becoming extended, for the intended birds there were dozens of Pheasants to be seen, which was already on yesterday's list, I needed to summon some help from Paul Harris but before he could reply a skein of 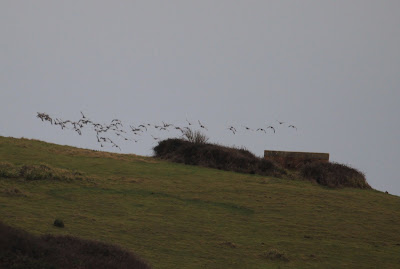 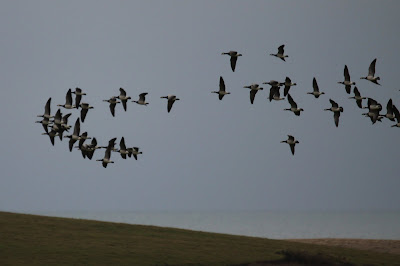 and headed in our direction. Saying 'our', as I had just bumped into long time friend and fellow (Somerset) birder Julian Thomas (thanks Paul) who was on the same mission. He and I have had quite a rapport over the last few years as his name appears on my mobile phone immediately before my daughter Julie. It is not unusual for me to select his number when sending a text which of course always ends "I love you darling"!
The Great Britain Year List now stands at - 110

and to close, I can inform the readership that at 03-00 tomorrow I set course for Norfolk for 4 days birding, followed by visiting maybe 3 lots of friends on the way back to Weymouth - I'll keep you posted every step of the way - bon voyage!
Posted by Bagsy at 19:33