According To You - Orianthi

A crisp, clear, cold, frosty, sunny and almost windless day was simply too much of a temptation as I ventured out yet again, this being 2 days in a row. Visits to the cemetery and Radipole were combined with changing currency, flu jab and collecting anti-Malarials for the upcoming trip, all of which is now coming together quite nicely. 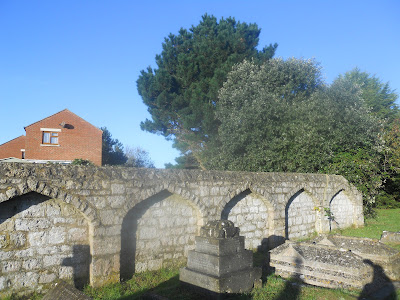 Unfortunately, all did not start well at the first venue as it was quickly noticed that the householder had chopped down the Apple Tree, and all its understory, favoured by so many birds this time of year! However, that was not deterring the numerous 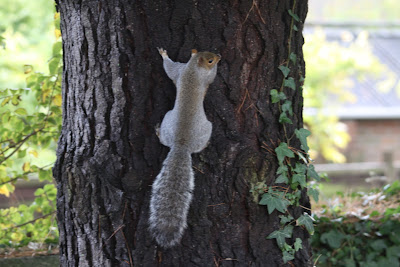 GREY SQUIRRELs from continuing to bury food for the onset of winter. 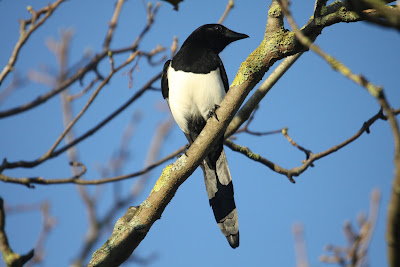 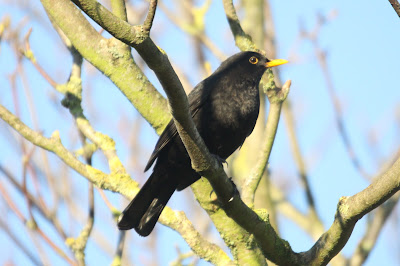 On the ground, most numerous today were BLACKBIRDs adorning every tree and bush, 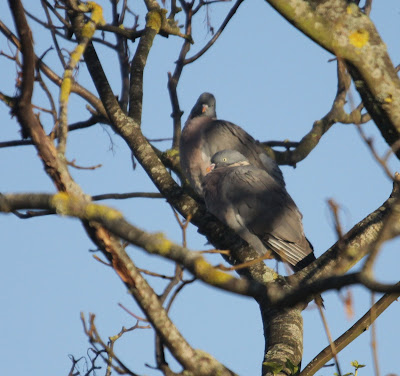 while overhead many 'hundreds' of WOOD PIGEONs seemed undecided as to which direction they were going. 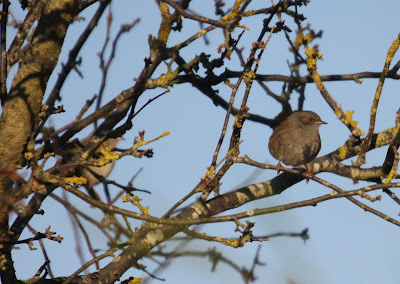 The odd DUNNOCK showed itself 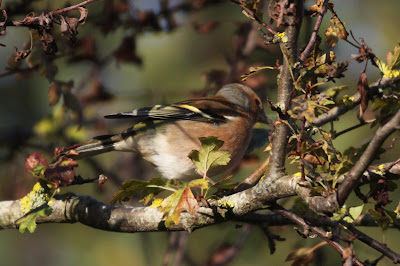 along with good numbers of CHAFFINCH 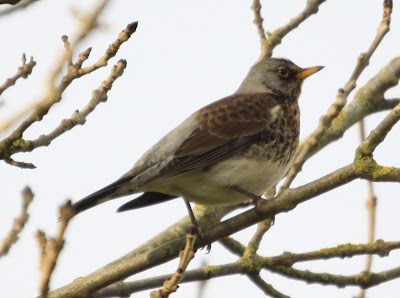 while c18 FIELDFARE and 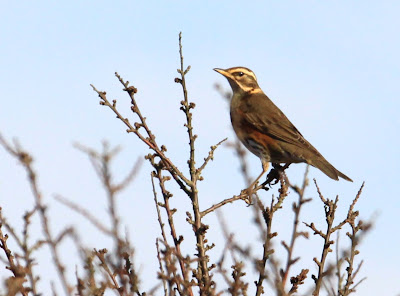 uncountable numbers of REDWING also put in an appearance. 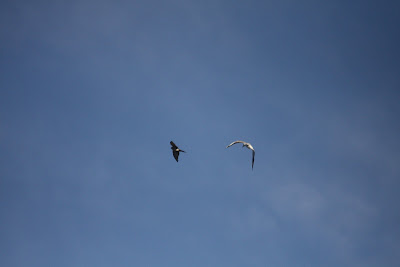 Above the western entrance to Radipole Nature Reserve and Sculpture Park a BLACK-HEADED GULL was tussling with a SPARROWHAWK as were a number of Pied Wagtail and Meadow Pipit too small to be seen on this distant shot. Only a few paces on, a flock of maybe 10 or so BEARDED TITs were doing what might be called dispersal flights, gaining height well above the tree tops before dropping back into the reed bed further afield. 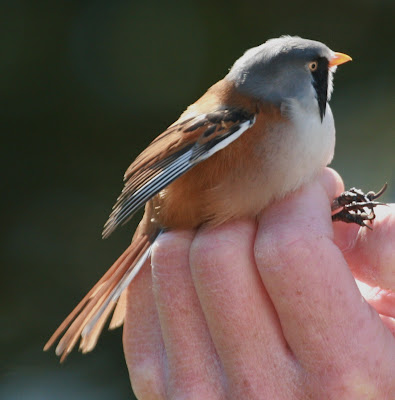 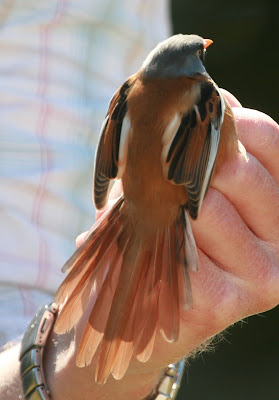 so a couple of 'in the hand' shots are added here for you further delight. 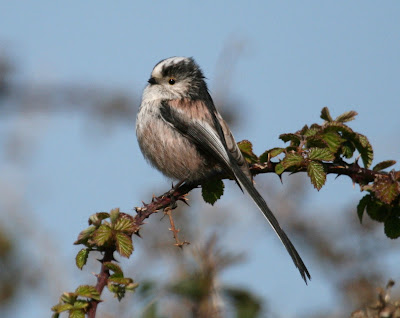 LONG-TAILED TIT were seen for the first time this year in the cemetery, but they were also at Radipole now gathering into winter flocks. 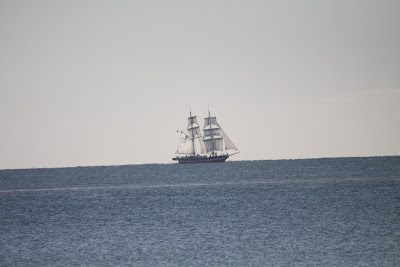 This excellent little wander ended on Weymouth Promenade, where the sea was like a mill pond, and the Sea Cadet Training Ship 'Royalist' stuck out like a sore thumb on the horizon before heading off for my first appointment.
Further to all of that, I received a most welcome e-mail from my friend Chris Cook (Fashion Editor for the Tokyo News) in Japan wishing me good luck and bon voyage and sending these 2 incredible shots of 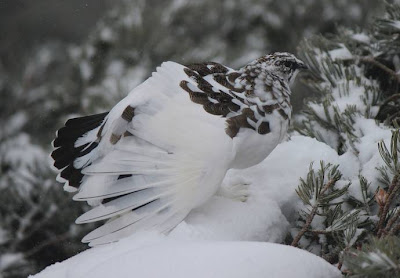 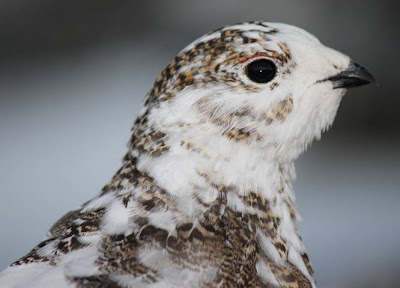 in the Mountains west of the capital. I have spent many an hour perched on the slopes of Cairn Gorm and Glen Shee trying for such shots, thus far having been unsuccessful. Thanks so much Chris - and hope I've got this right?

and finally, having projected talented guitarist Ana  Popovic as the female Bonamassa in a previous post, I am now introduced to another contender by my friend Andy Lindsay. He and lady friend Dawn Partridge attended an Alice Cooper gig last week and came back raving of the 'sensation' that 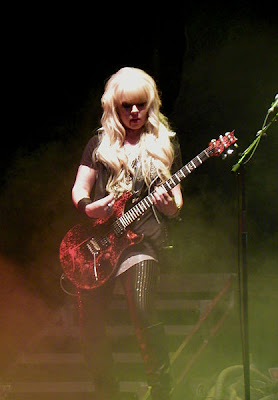 Orianthi Panagaris (born 22 January 1985), better known simply as Orianthi is. A Greek Australian musician, singer-songwriter and guitarist, she is perhaps best known for being Michael Jackson's lead guitarist for his ill-fated 'This Is It' concert series, and as the lead guitarist in Alice Cooper's live band. Her debut single "According To You" has peaked at No. 3 in Japan, No. 8 in Australia and No. 17 in the US; her second album, "Believe" received a worldwide release in late 2009. In 2009, Orianthi was named one of 12 Greatest Female Electric Guitarists by Elle Magazine and also won the award as "Breakthrough Guitarist of the Year" 2010 by Guitar International Magazine.
Take A Listen to Orianthi
then take a LOOK (just 'one eye' gents)
ORIANTHE PHOTOGRAPHS LINK

This album comes highly recommended if only for the seminal guitar playing by Bernard Butler and one of the greatest voices in Rock 'n' Roll, Brett Anderson.
Posted by Bagsy at 17:39