ANOTHER TRUE STORY
(to be sung to the tune Another True Story)
We didn't forget to change the 'header photo' at the turn of the month yesterday, just another severe case of Communication Breakdown. It may be noted that the Post was published at 08:08 yesterday morning, the reason being I awoke to find Internet Active and made the executive decision to 'Strike while the Iron was Hot! Clicking 'save' followed by 'publish' the usual check was made to find all was well, followed by a flash of lights and the Burglar Alarm activating. To cut an already too long a story short, the increasing gale force wind had blown a tree down in Parley village leaving us with no power until just before dark. Makes you appreciate that 'Open Log Fire'!
Among so many experiences my dear friends and I have shared is a deep appreciation of the Progressive Rock Band GENESIS. Of all their 'hundreds' of compositions Burning Rope most epitomises our Love for each other. Appropriate then as a headline today given our latest meeting and continuing Friendship!
Burning Rope (Link) - Genesis
The warming sun, the cooling rain,
a snowflake drifting on the breath of the breeze.
The lightning bolt that frees the sky for you,
yet only eagles seem to pass on through.
The words of love, the cries of hate,
and the Man in the Moon who seduced you
then finally loosed you.
The preliminary plan for the penultimate day of the first month of this year was to drive to my friends, Paul and Tess Lifton in Emsworth, Hants, enjoy a full day 'birding' before returning to Parley later that same day. From their home, already stated to be a Hampshire address, it is no more than an arrow-shot into the neighbouring County of West Sussex where 2 of my intended 3 target birds were to be found.
Note:- In Royal Naval parlance the term 'Winger', in its original sense, is an uncomplimentary term for a Boy or Young Seaman who is befriended and taught by an Older Salt (Sailor). 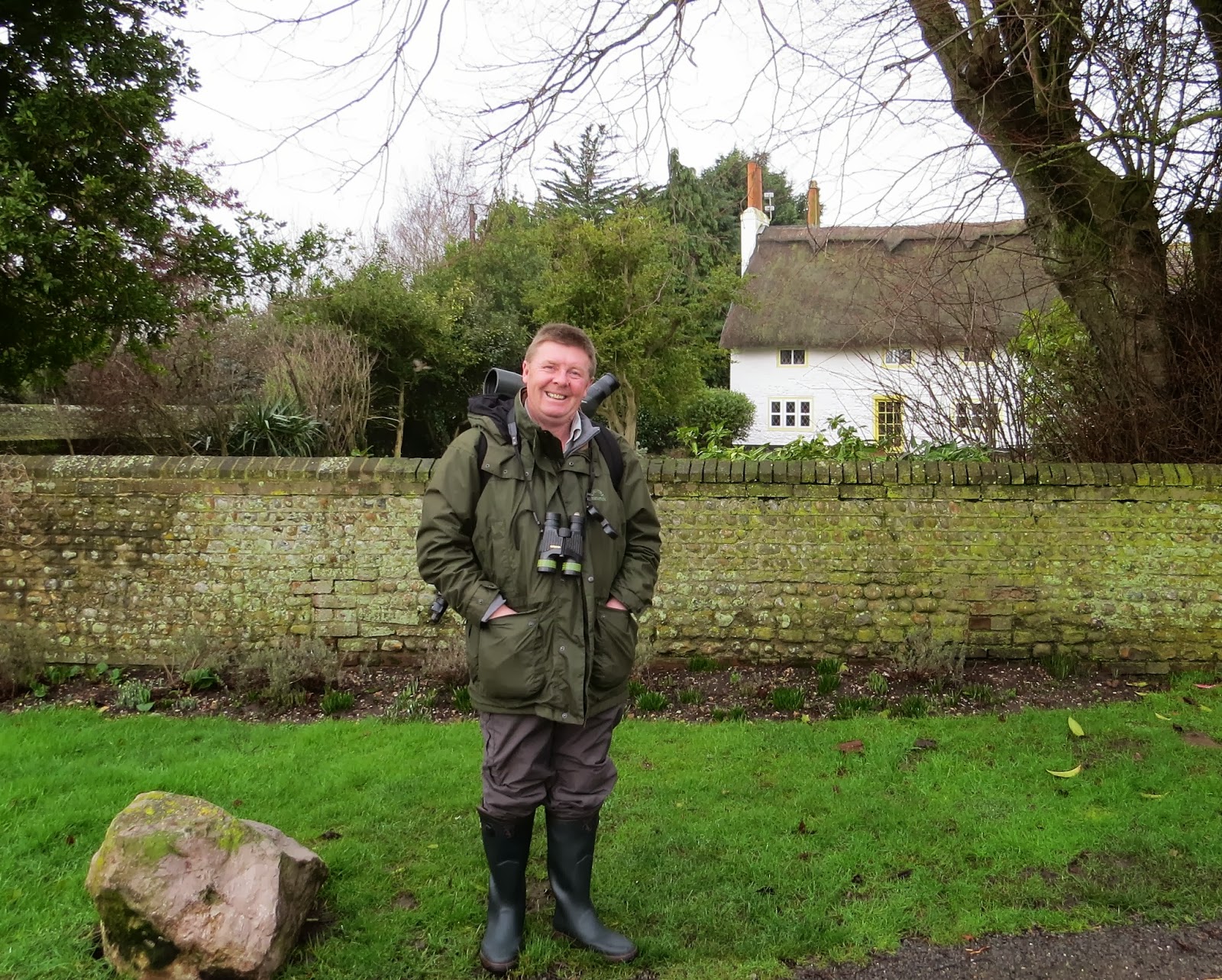 MY 'WINGER'
Joe Brown lookalike PAUL LIFTON
I have always referred to Paul as my Winger since our meeting at the Merchant Navy College, Greenhythe, Kent in 1978. At that time he was undergoing compulsory Navigational Aids (Radar, Decca, Satellite Navigator et al) Training while I was completing a 12 week period of 'study leave' prior to qualifying for my Master's (Captain) Certificate of Competence. While he is a full 8 years junior to me in 'age', his combined qualifications and marine knowledge far outstrip my own, so Winger is two-fold derogatory - just how it was intended hey Wings? Unfortunately the 'Wingette' had to go to the 'W' word (we don't like using 4 letter words in this publication) as she is at present helping their younger daughter in her job, so it was just Paul and me. Even she didn't escape the clutches of this Son of a Seasick Mermaid as on our meeting, a year later, her commonly used name Terry (Teressa) was changed to the far prettier and more Thomas Hardy 'Tess' by which she is still know to many of us! First port of call was 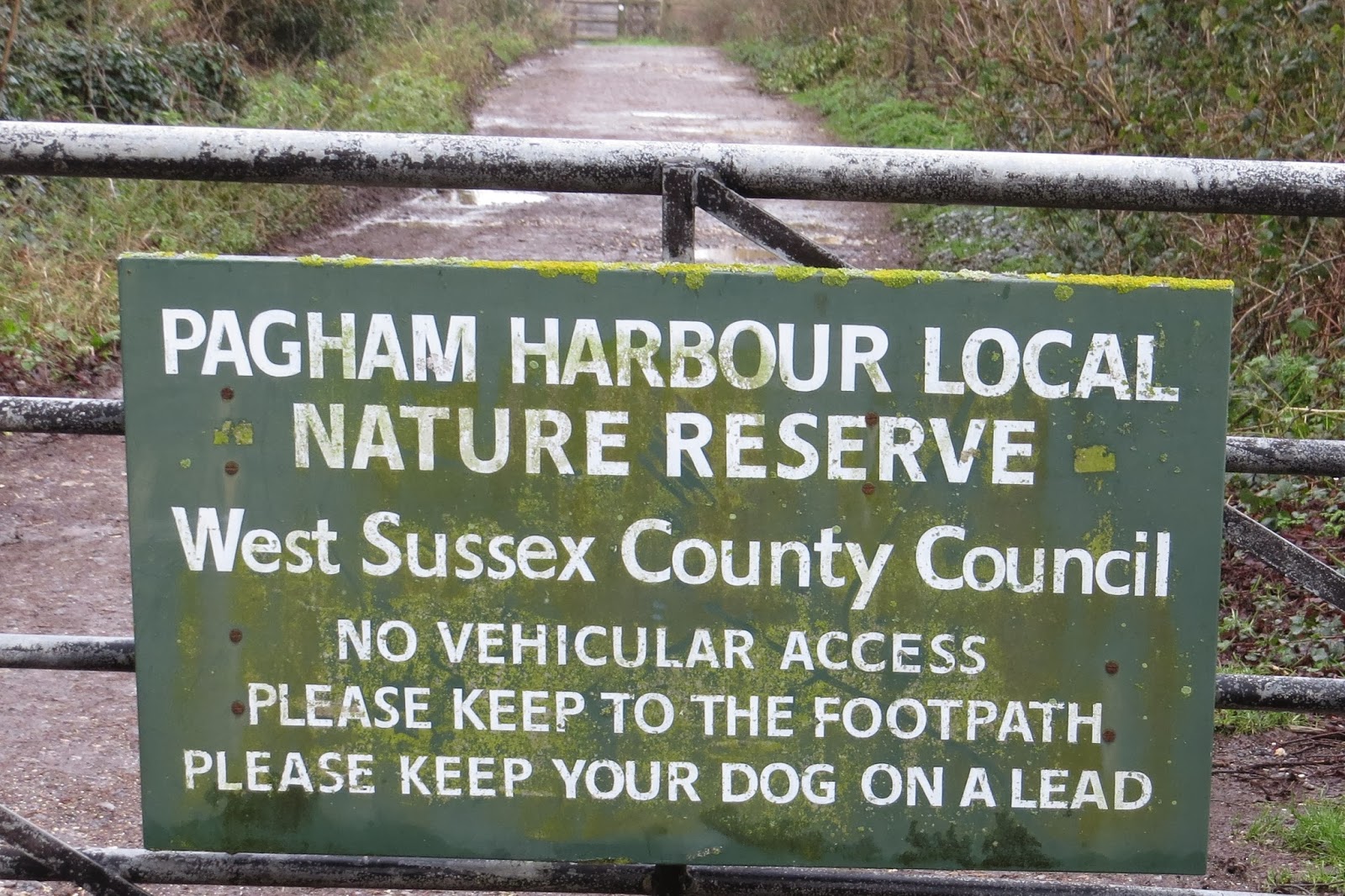 where we immediately made for the 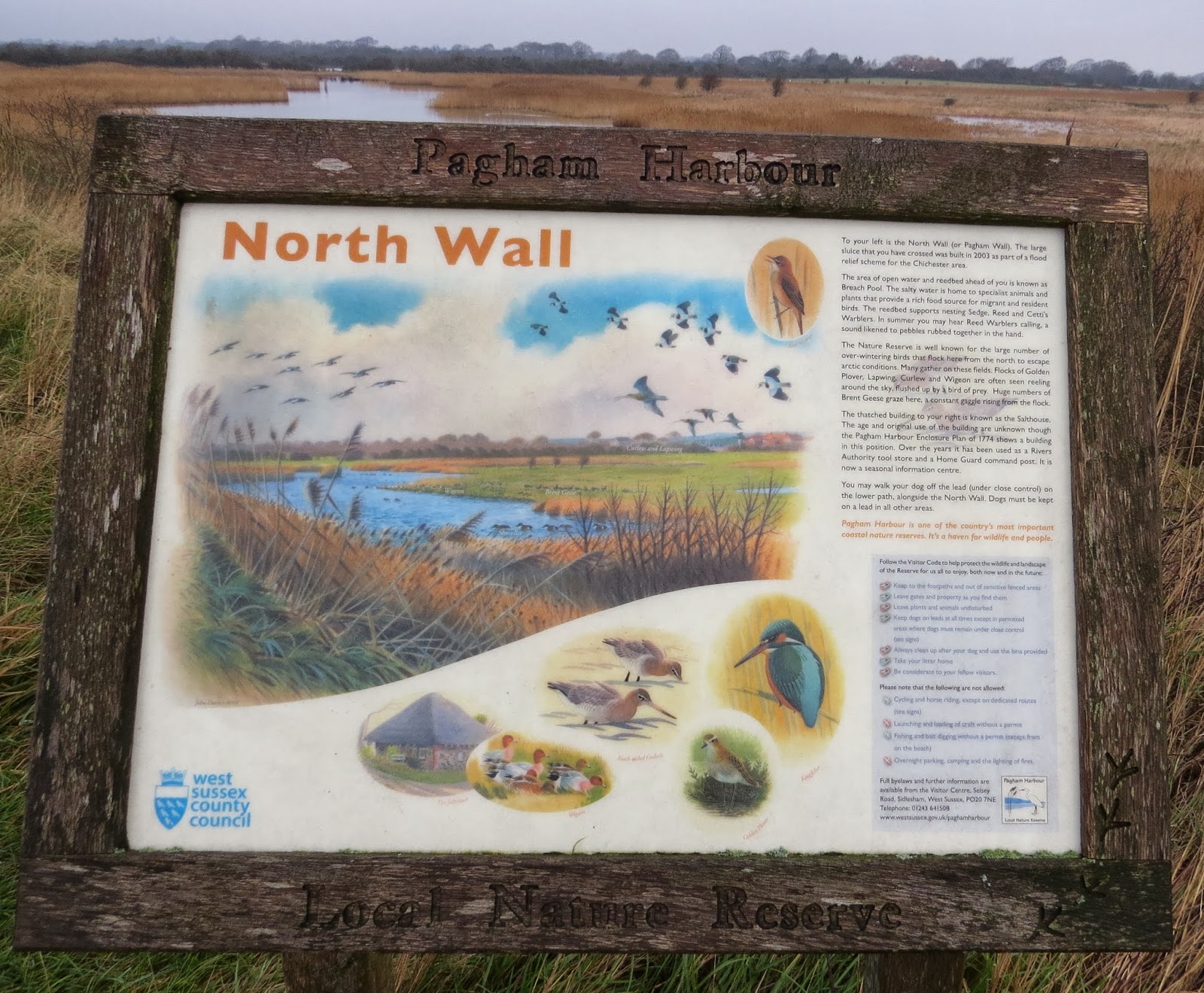 where, before having chance to scan the sea, we bumped into 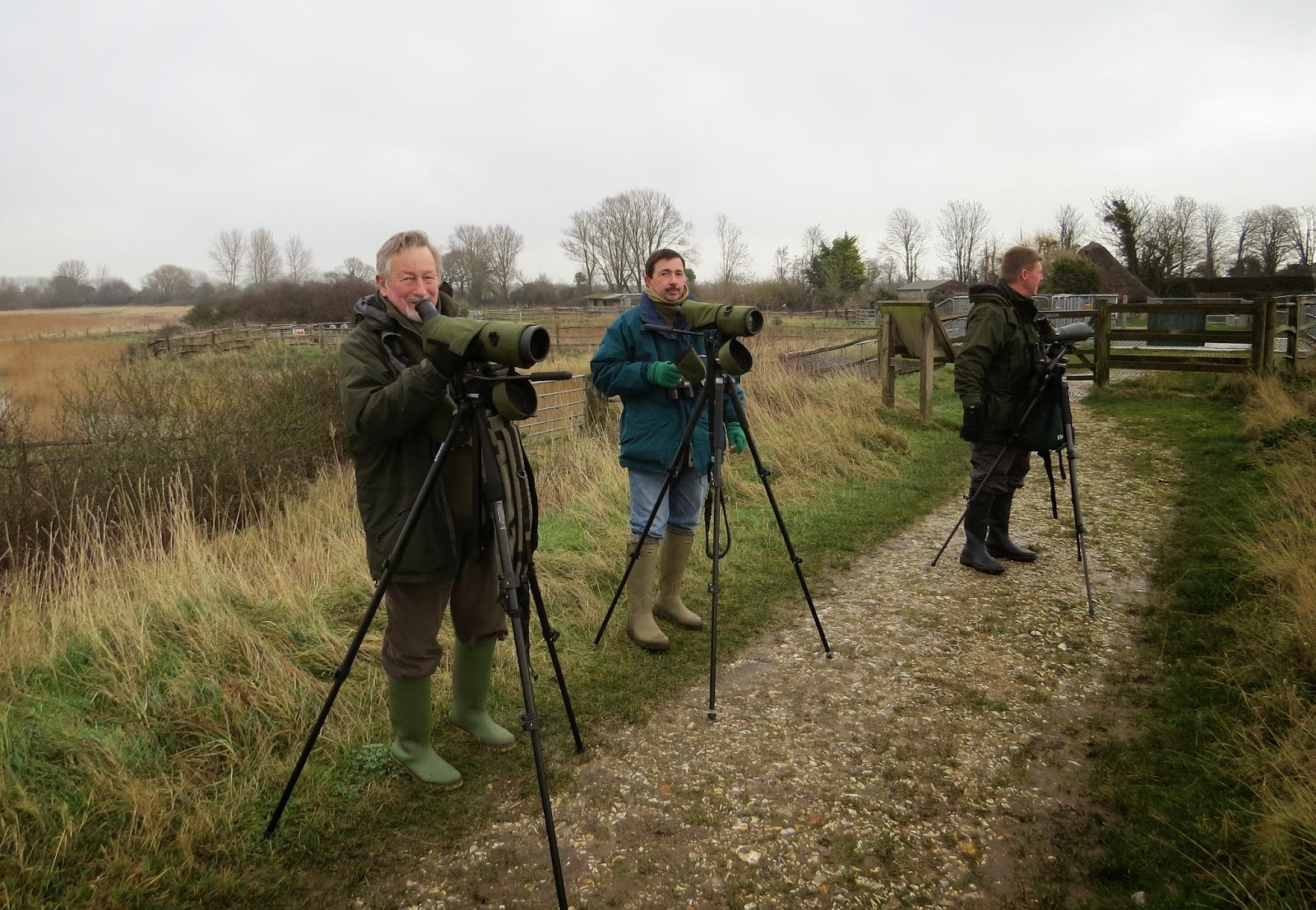 Frank and Neil (previously unknown to us) and asked if they had
seen anything of the RUDDY SHELDUCK* thought to be hereabouts.
They hadn't, but quick as lightning Neil (centre) called that he had spotted them. 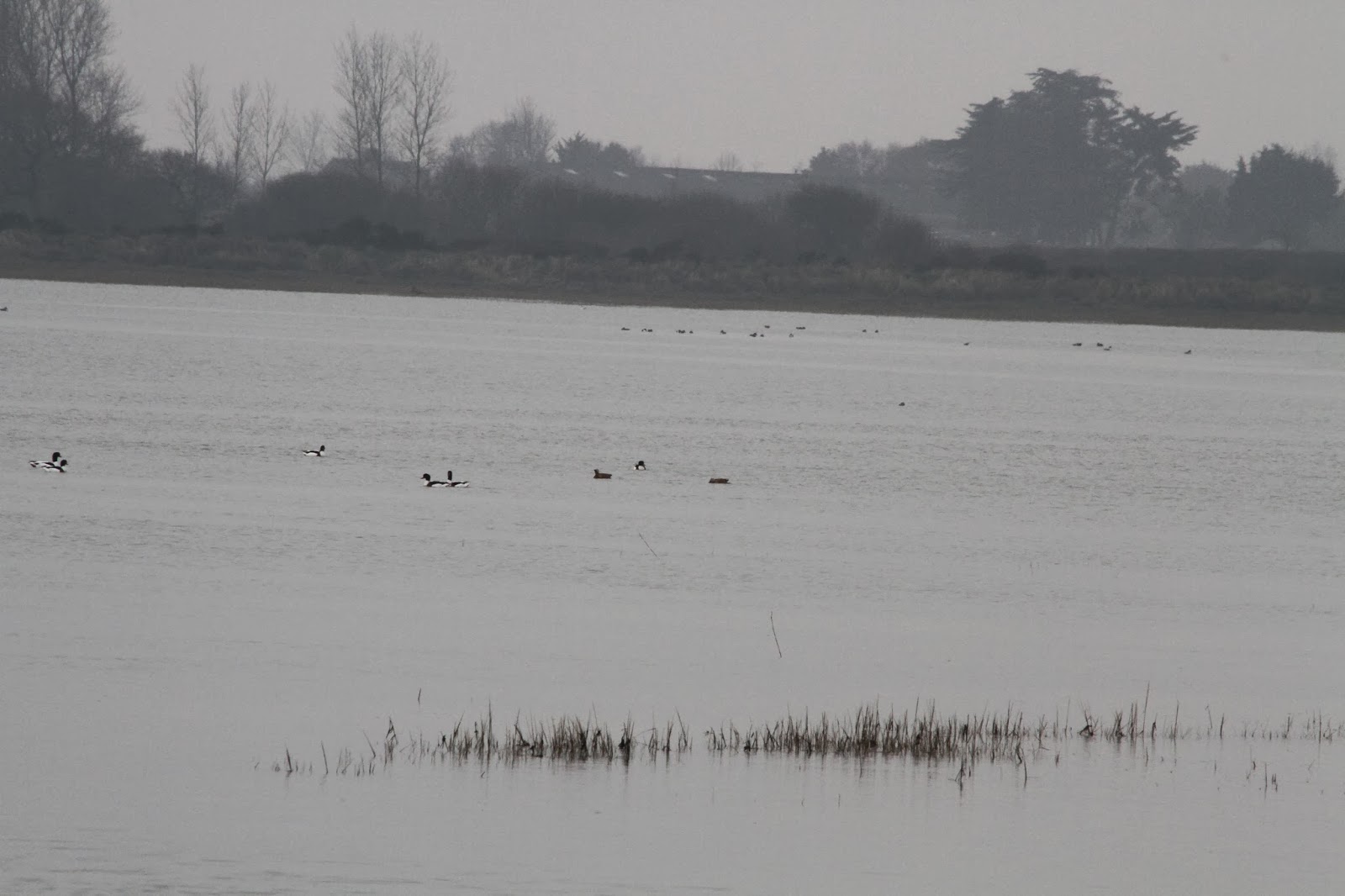 At great distance the c2 birds concerned were 'flanking' a
(Common) SHELDUCK. 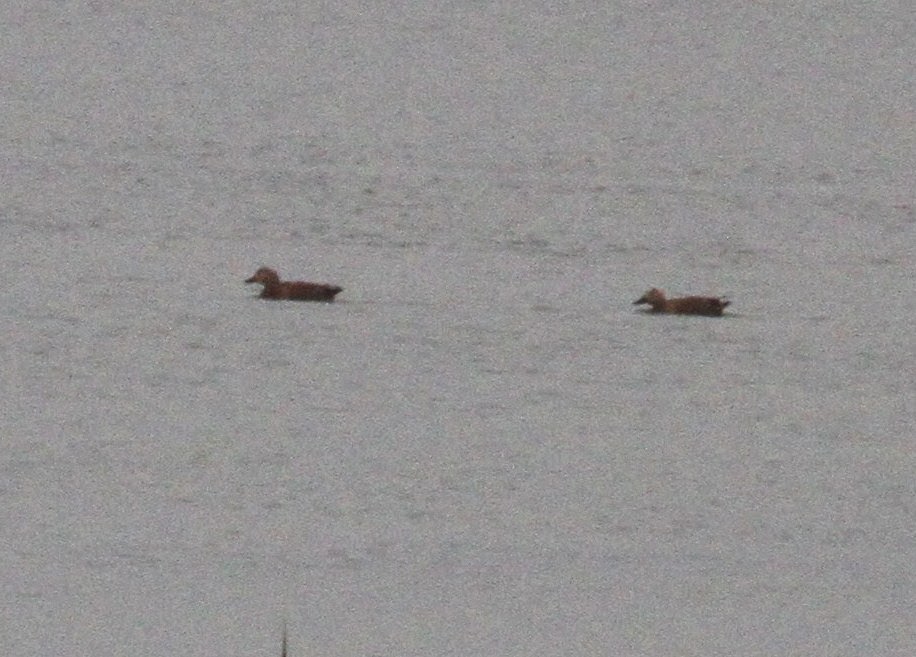 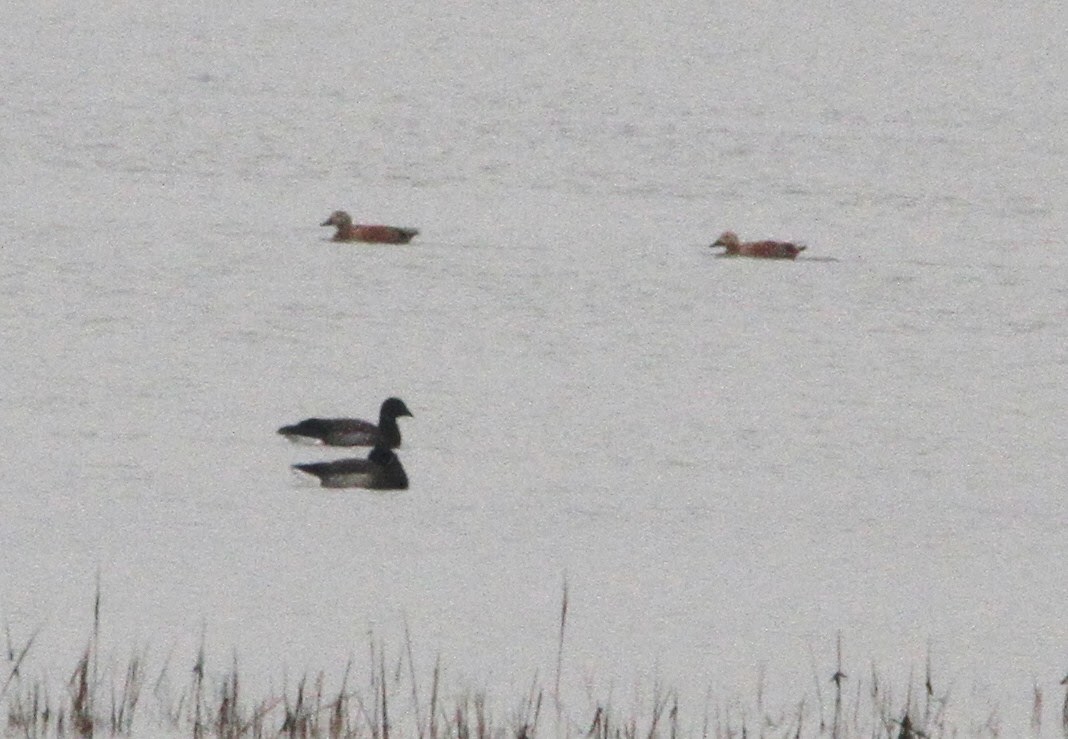 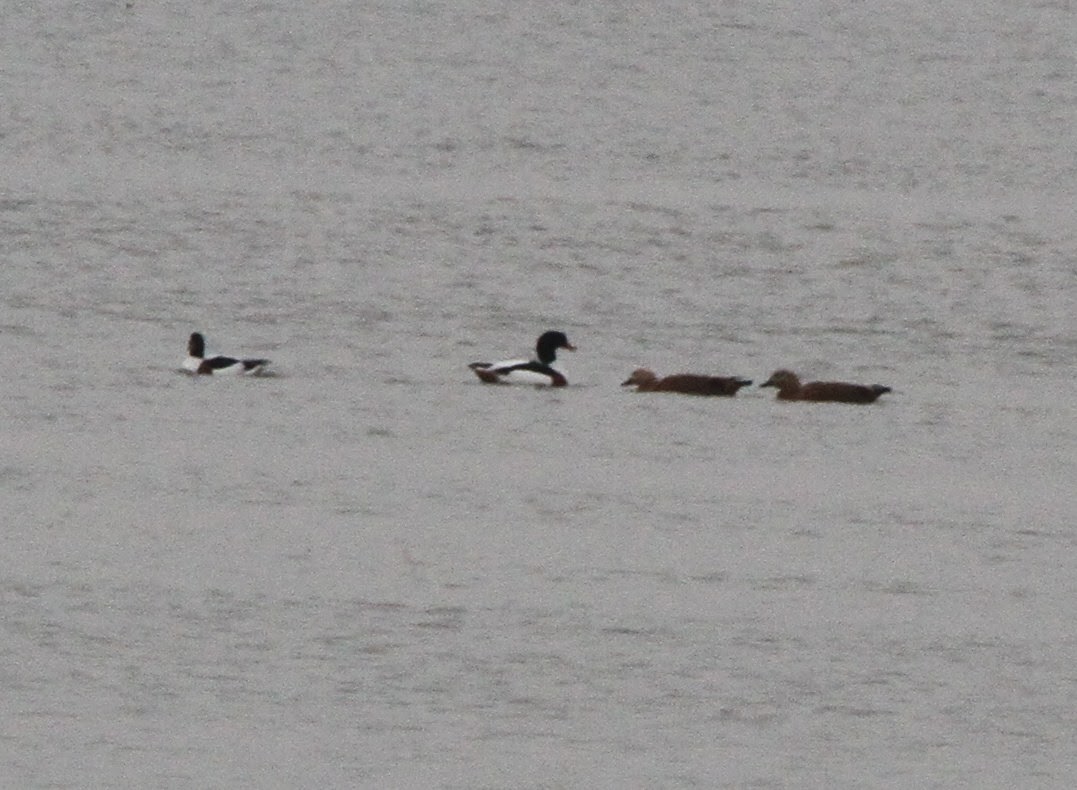 Always better through the telescope and for illustration 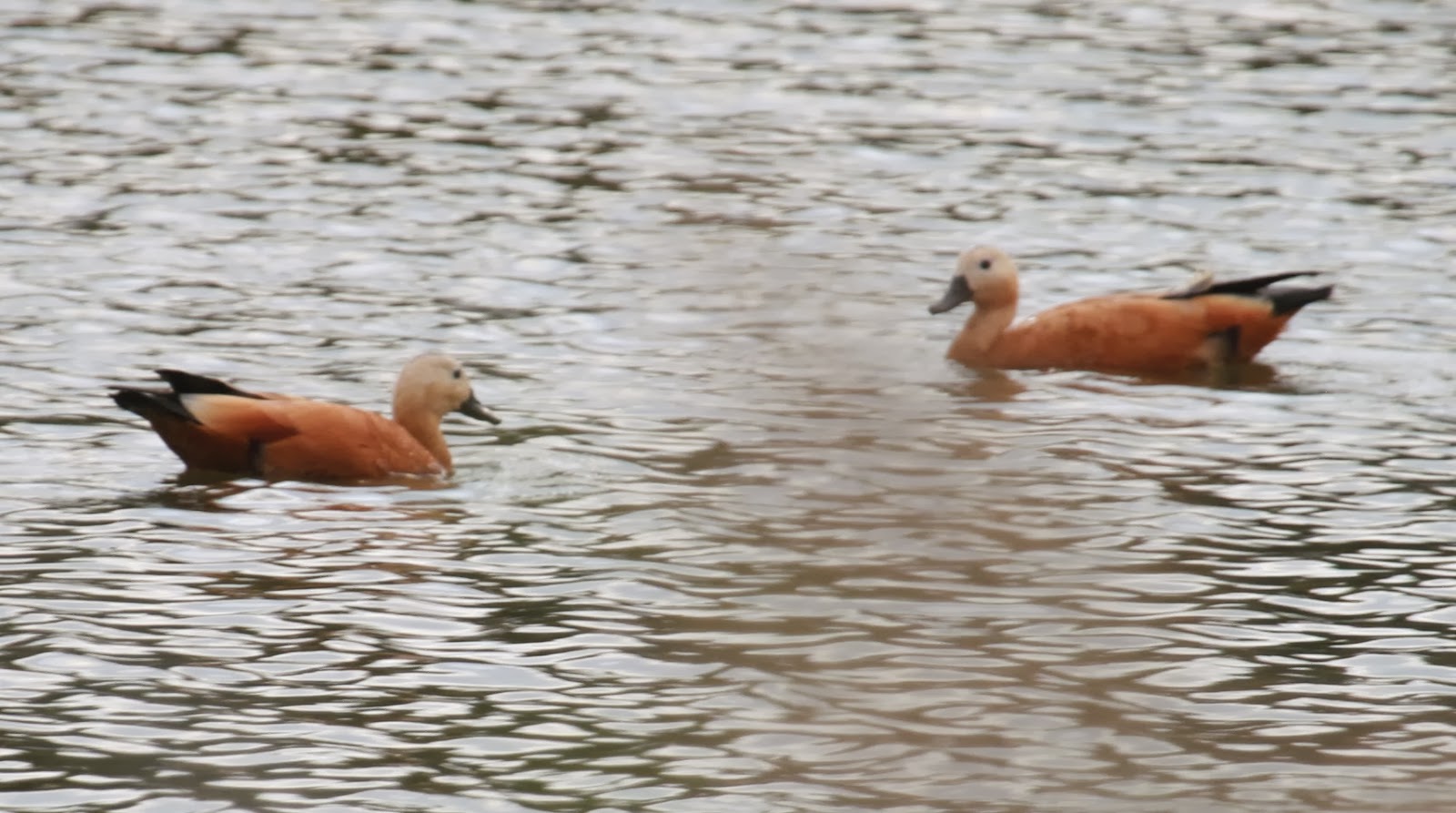 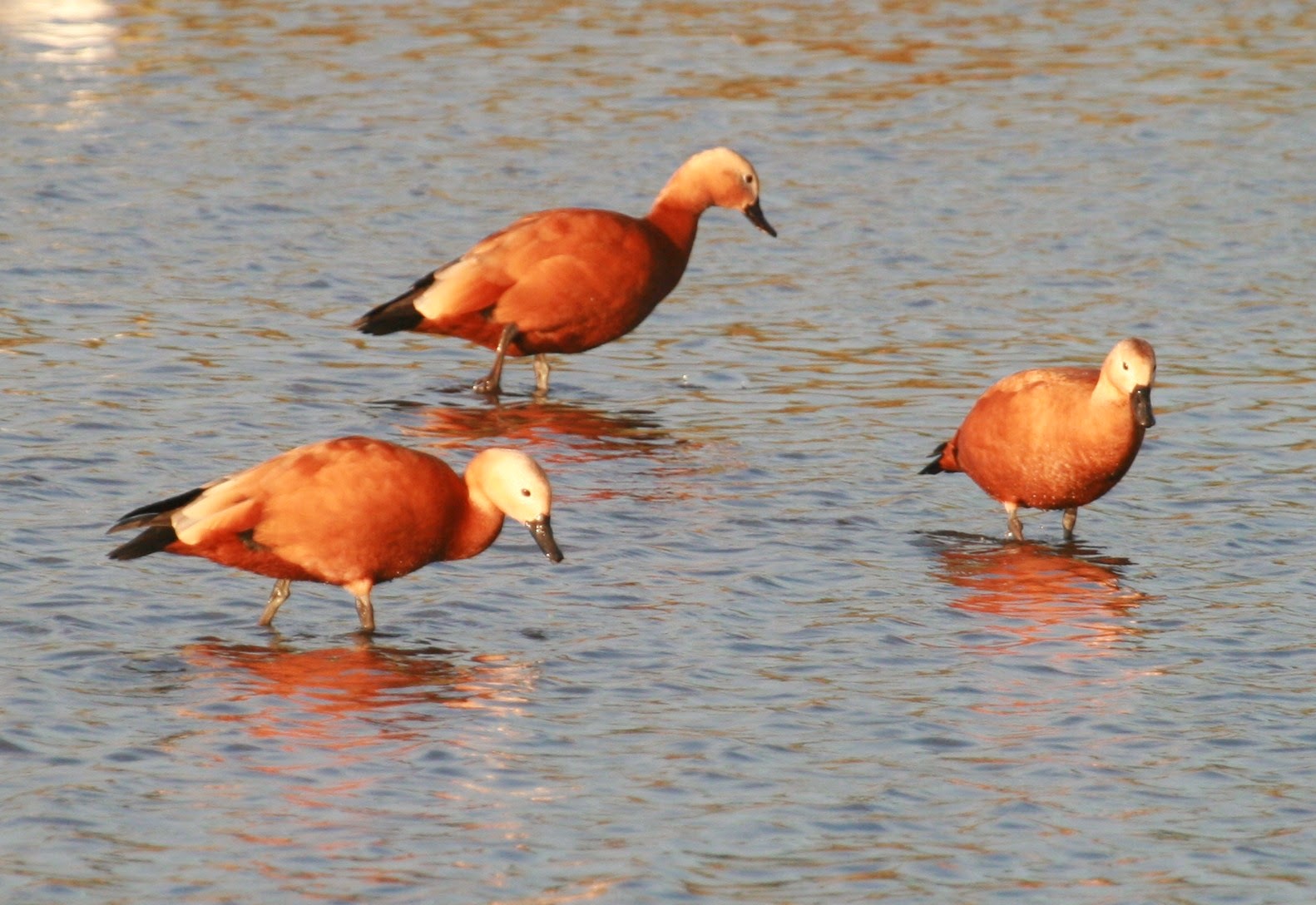 a couple of images from the archive of these fine Waterfowl. 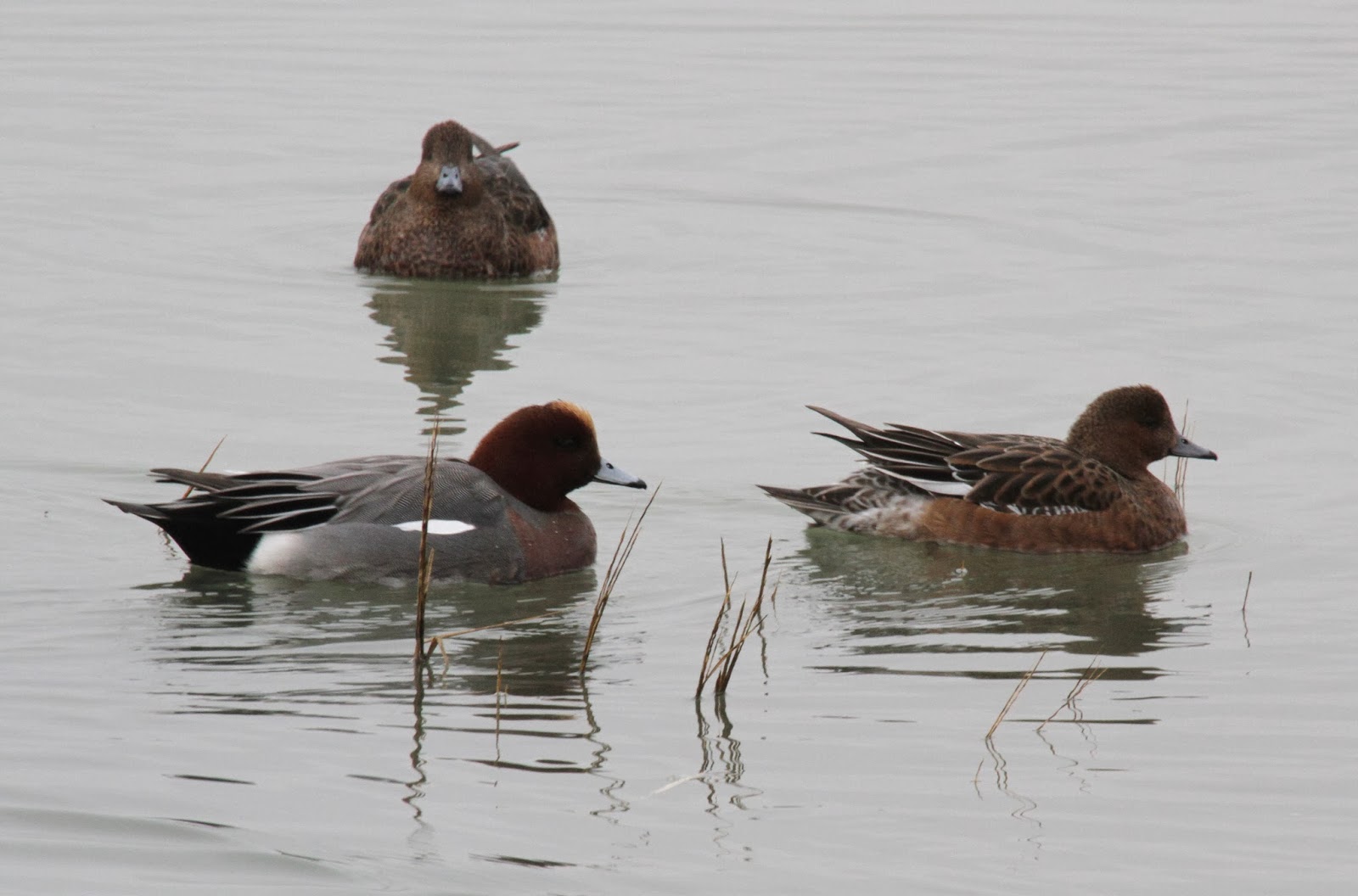 All else close at hand there were a few
EURASIAN WIGEON

so we were soon on our way to the nest stop. Walton Brook, still W Sussex, was a half hour drive where we joined 4 other birders on the bridge crossing the Bognor Regis to London Victoria railway line and found the news to be 'grim'! There had been no sign of the Great Grey Shrike at all and that is how things remained up until our departure 2 hours later. My suggestion was proving good sense as the 'local lad' took command of my car and did the driving while I braced myself for the next disappointment - faint heart never won Fair lady! The next stop was close to the old council tip at Broad Meadow, overlooking the northern section of Langston Harbour back in Hants. This was Thursday 30th January, the day of a New Moon and by definition Spring Tides. From our position we could hardly see the sea let alone the Wildfowl, but were advised by a passing couple that we might be better placed a little further down the road at Butt's Farm where they had seen c2 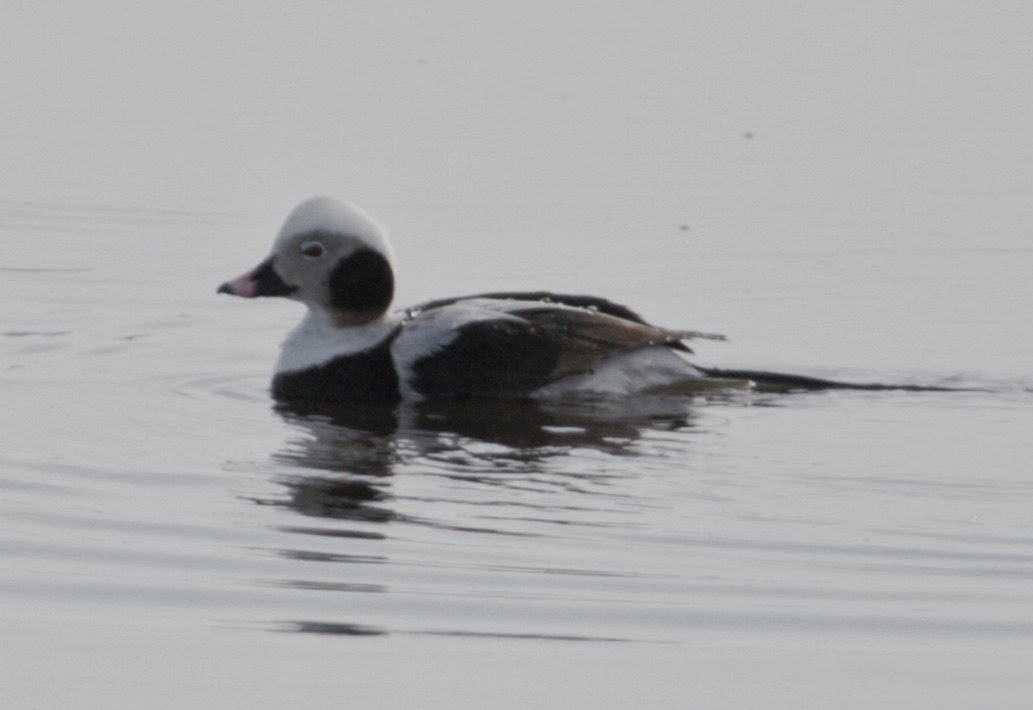 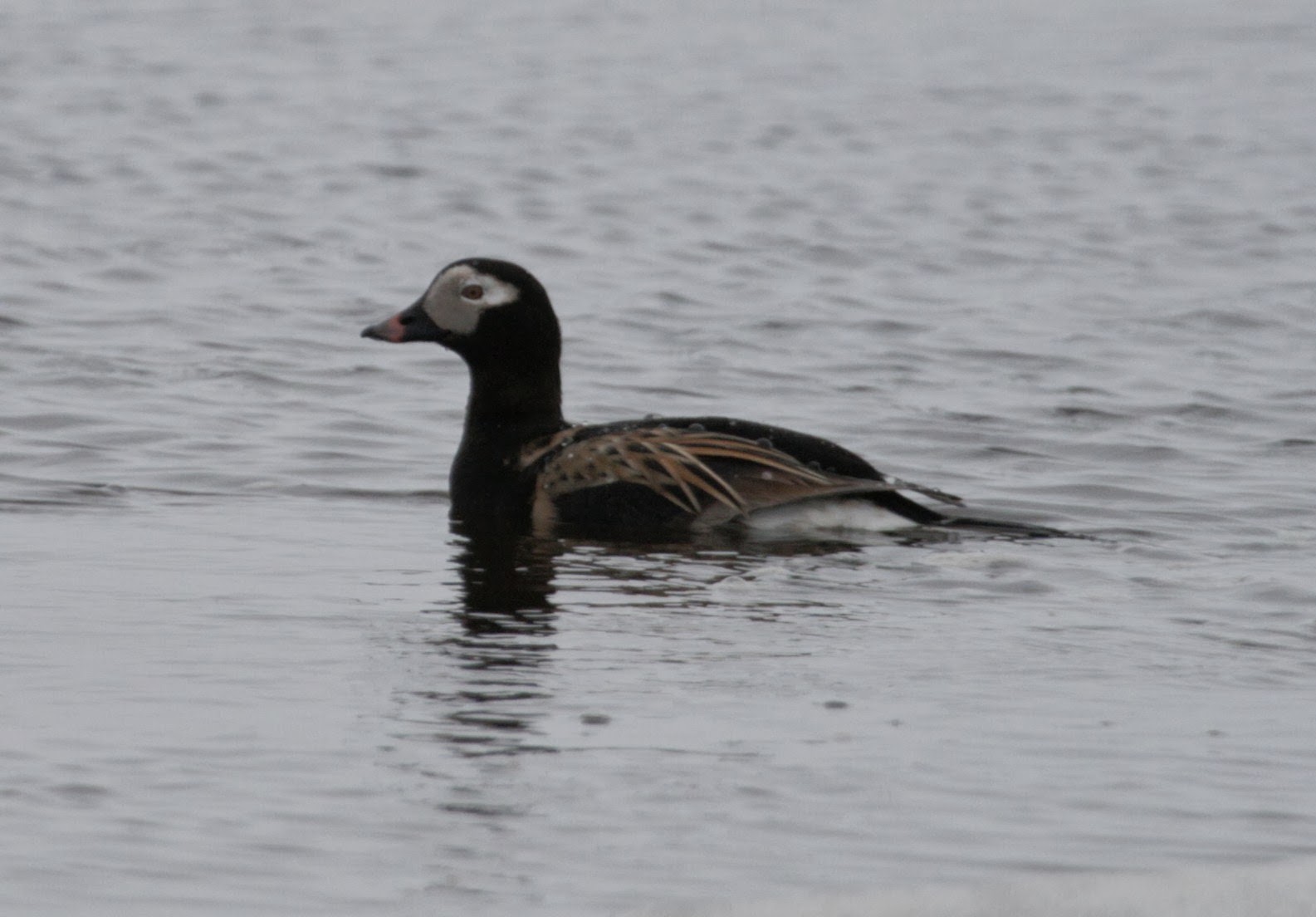 earlier in the day. They were to be congratulated as the Winger
quickly picked up one, followed by the second in quick succession.
Apart from the birds, we had enjoyed a GREAT day together.
Friday 31st January 2014
Having stayed overnight had numerous benefits, starting with a fine evening meal and long 'catching up' conversation. Additionally, at daybreak the resident overwintering 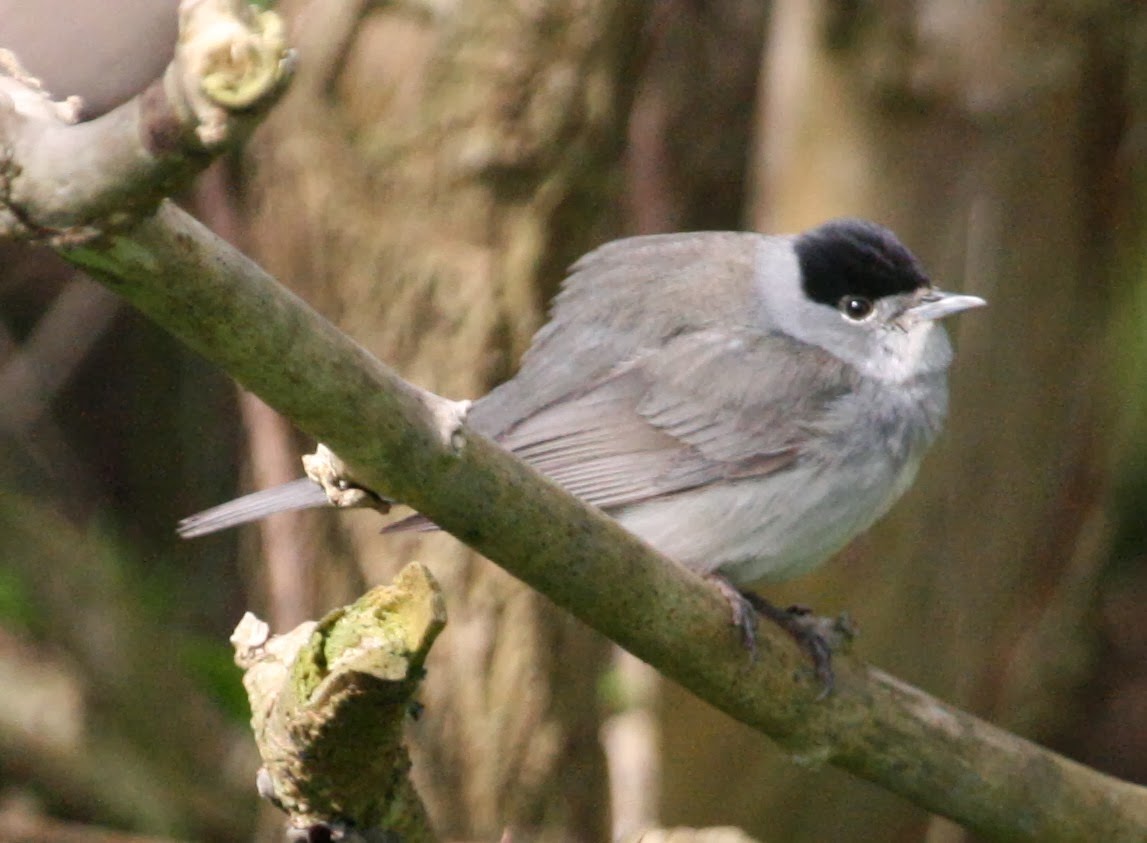 (male) BLACKCAP (there have been a pair)
put in no more than a fleeting glimpse, just enough to qualify as the final species for the month of January on the 2014 Year List. From there on things simply went to RATS as the turning off the Motorway taking me back for a second look at yesterday's Long-tailed Ducks was missed, with turning back not being an option. Not to worry as ahead of me was still a chance of re-locating the Long-billed Dowitcher at Pennington Marsh, again en-route. All was well until just before arrival at the Cadnam turn off when the Heavens opened up after which the heavy rain didn't stop for the rest of the day.L-bD saved for another day. 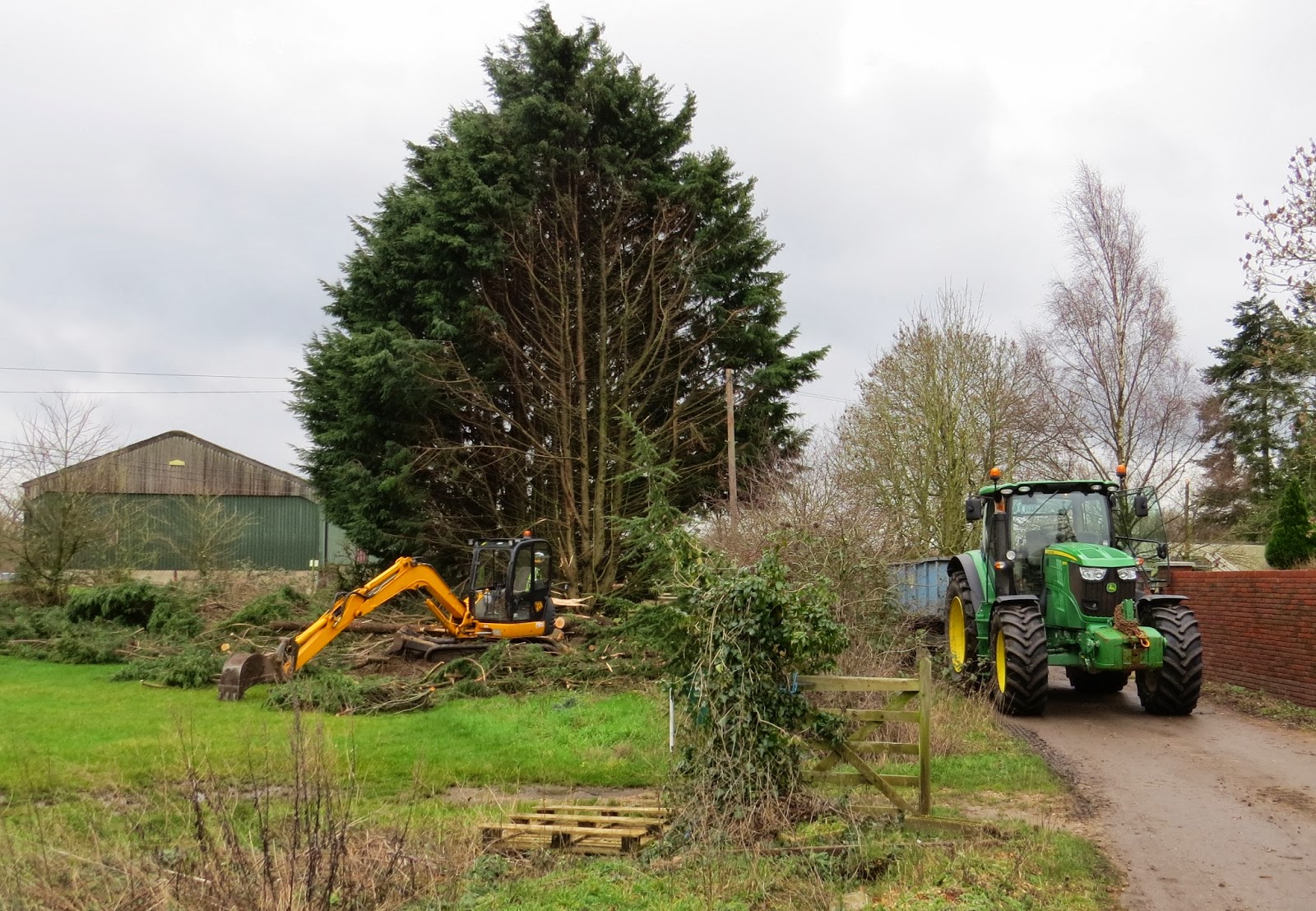 Back at Parley and with no lull in the rain, Farm manager Adrian with younger son Gavin were paving the way for what is hoped to be the FINAL visit by British Telecom to fix the Internet???? The requisite Leylandii Trees had already been 'felled' before my arrival, and were slowly being converted into a nice crop of firewood for next year, before they broke the Bad News. BT it would seem do not have a Technician available until Wednesday with the scary bit being no indication of which particular Wednesday???? 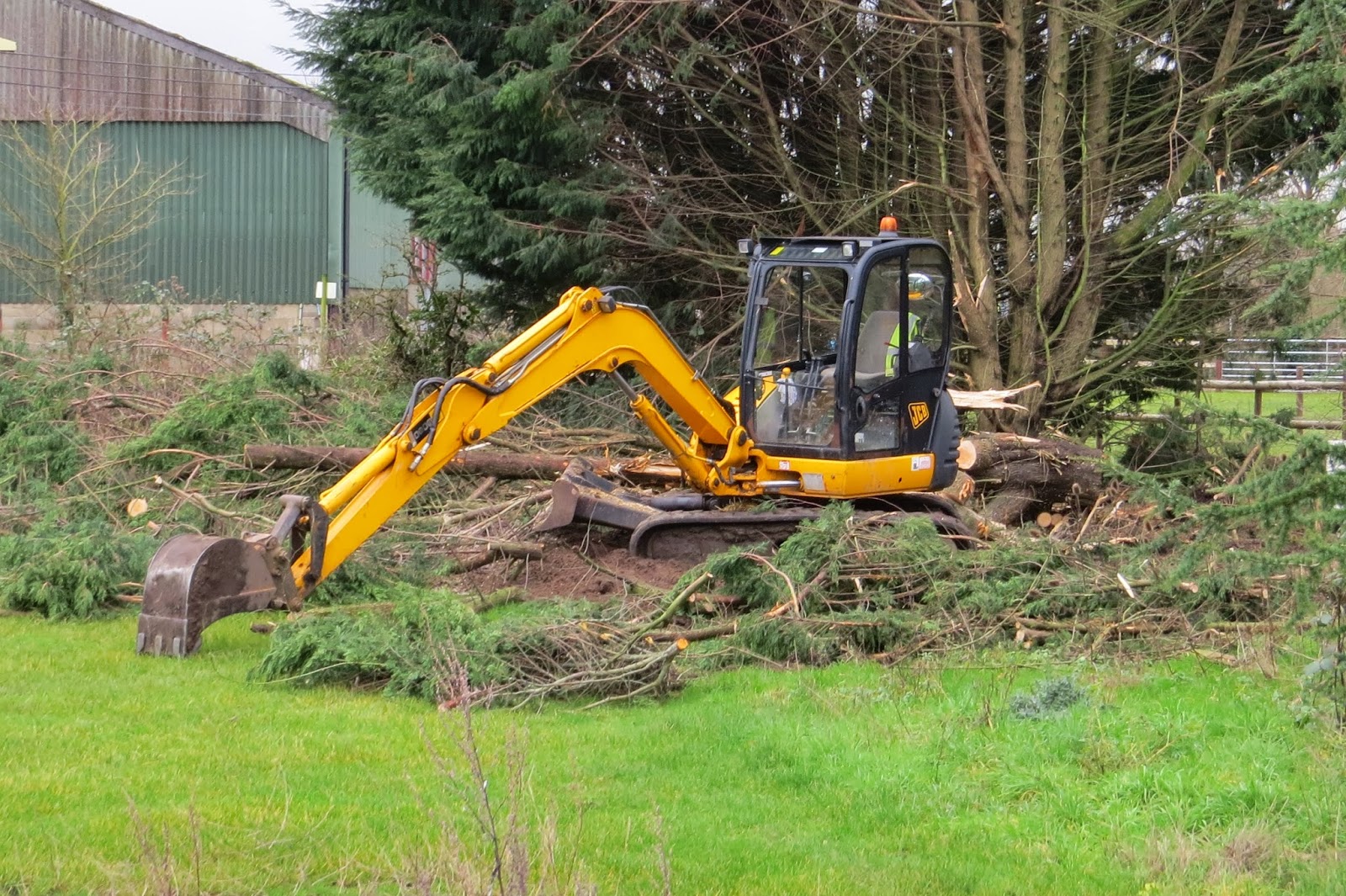 You're old and disillusioned now as you realise at last,
that all you have accomplished here will have soon all turned to dust.
You dream of a future after life, well that's as maybe, I don't know.
But you can't take what you left behind, you're all alone,
so keep in mind.
Don't live today for tomorrow like you were immortal,
the only survivors on this world of ours are.
The warming sun, etc - and the Man in the Moon!
Along with one or two 'Secret' thoughts!
Here are the January Stats for your perusal:-
GB Year     Dorset