Do You Read Me - Rory Gallagher

Saturday 1st February 2014
With the fervour of the start of a New Year behind us, we are not sure how to continue the Blog and hold the Readers attention. Far less going on in the 'Birding World' and with no trips, either here or abroad, planned things will now slow down somewhat. For the time being at least and to help catch up, as we are still a day or two adrift, we might revert to a Post every 2 or 3 days? We'll see how things go and get back to a DAILY when the situation allows. Rain continues to feature strongly on the weather front and although levels were starting to fall at the 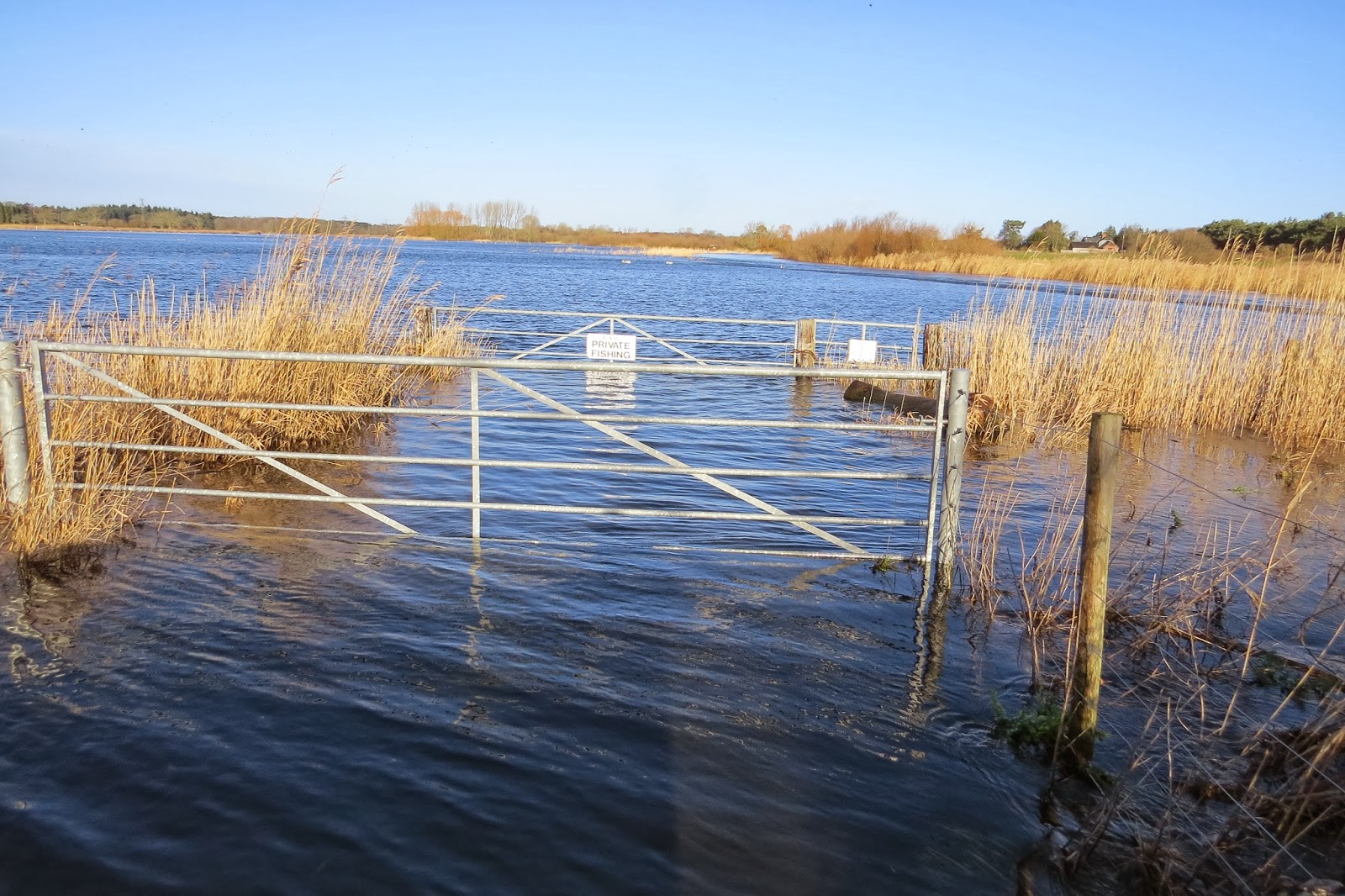 RIVER AVON
(the County border between Dorset and Hampshire)
they had certainly increased overnight. These two 5-bars gates, where the car is usually parked during visits to the Causeway, have not been inundated before even when the road was closed. However, this amount of water brings small benefits as this pair of 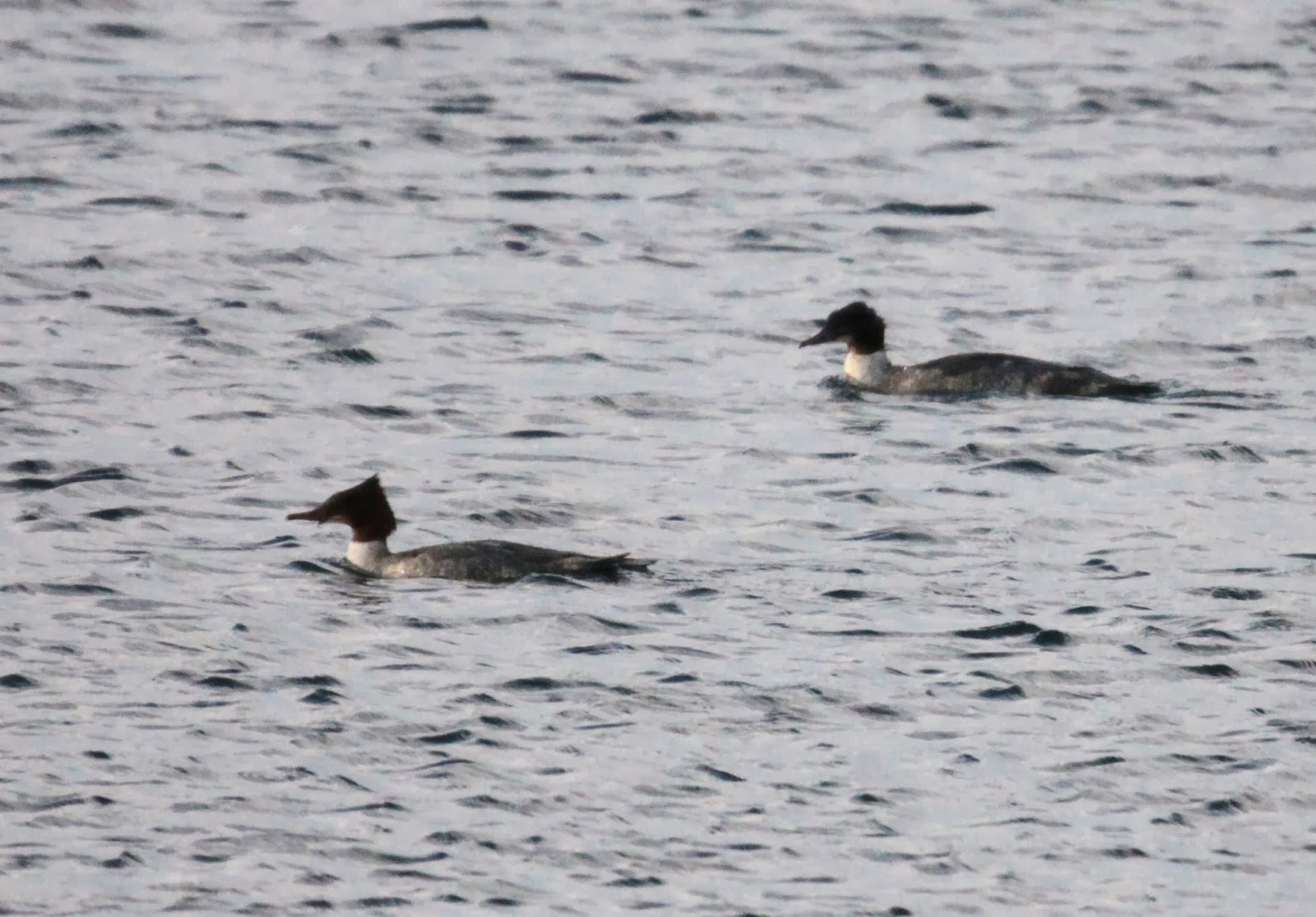 GOOSANDER
were spotted 'fishing' where once there were meadows.
At least one of the 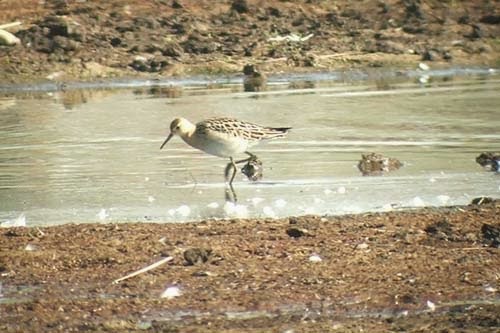 RUFF
are still there as is the massive flock of Lapwing, plenty of Greylag and Canada Geese, Wigeon, Teal and one or two Gadwall. Stopping at another gateway on my return to 'scope the floods, the load 'calling' of a 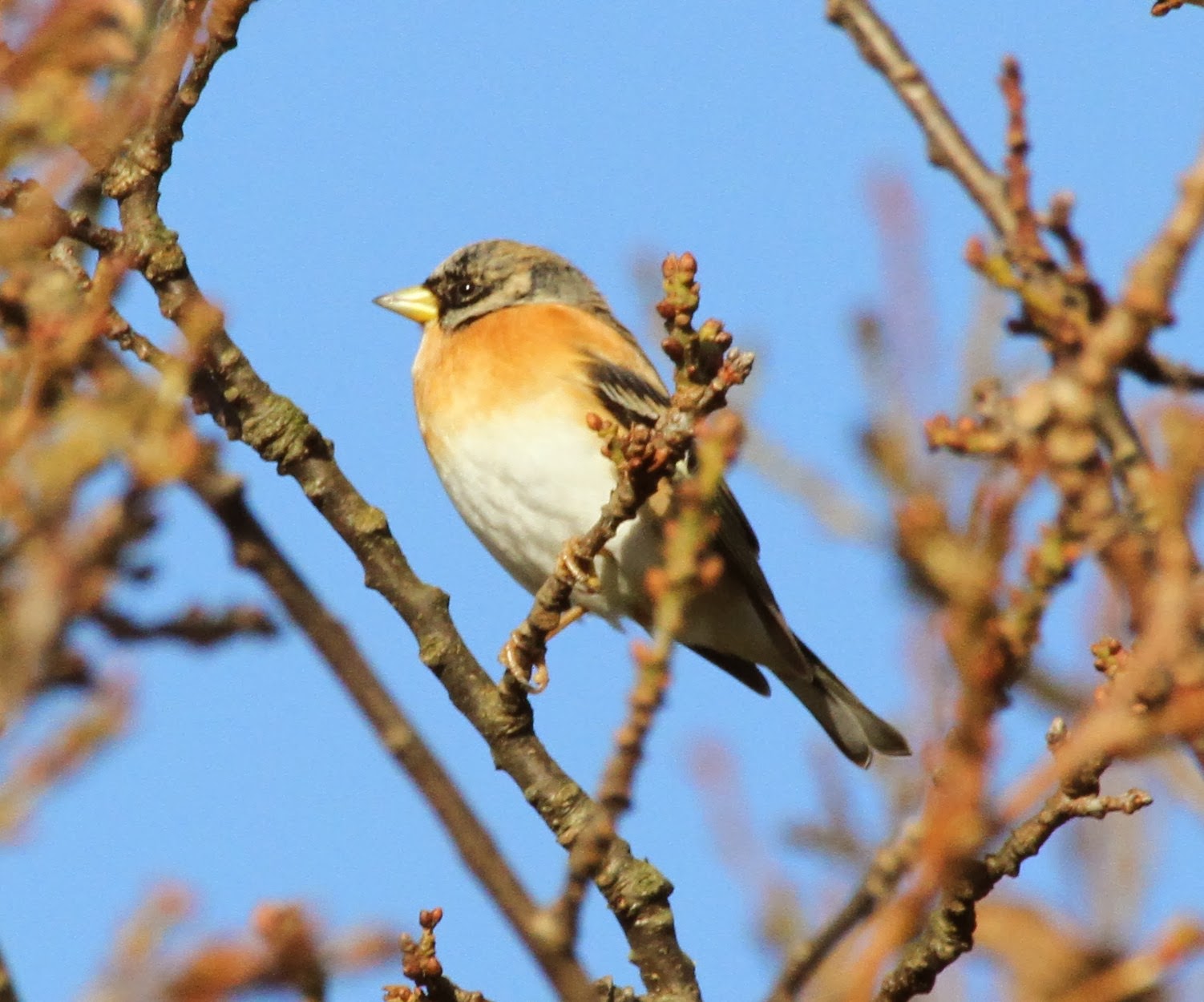 BRAMBLING (archive)
was heard, but to be certain did compare it to my Bird Song App.
As the wind dropped and the threat of rain seemed less likely a 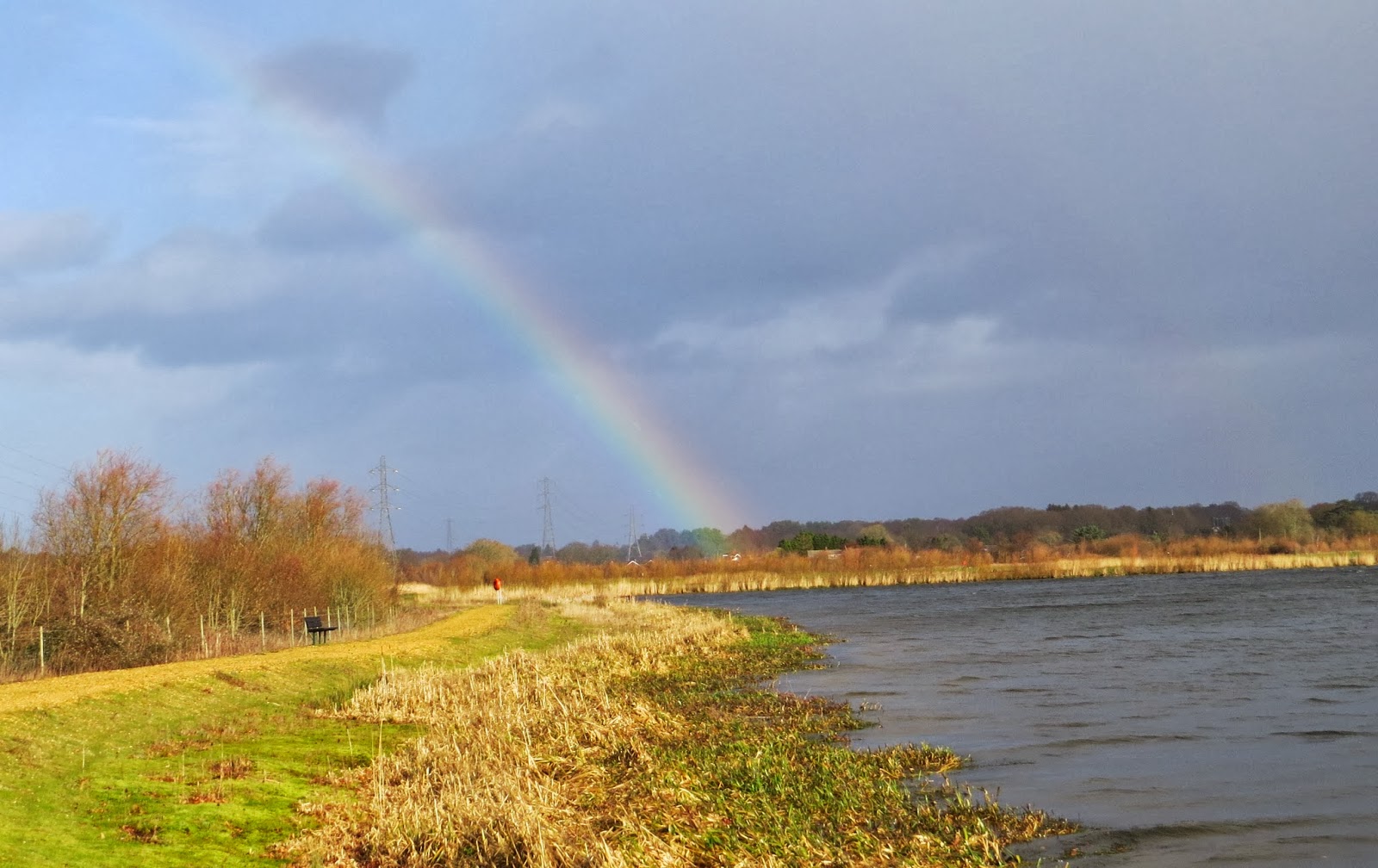 RAINBOW
greeted me at Longham Lakes but more intriguing were these 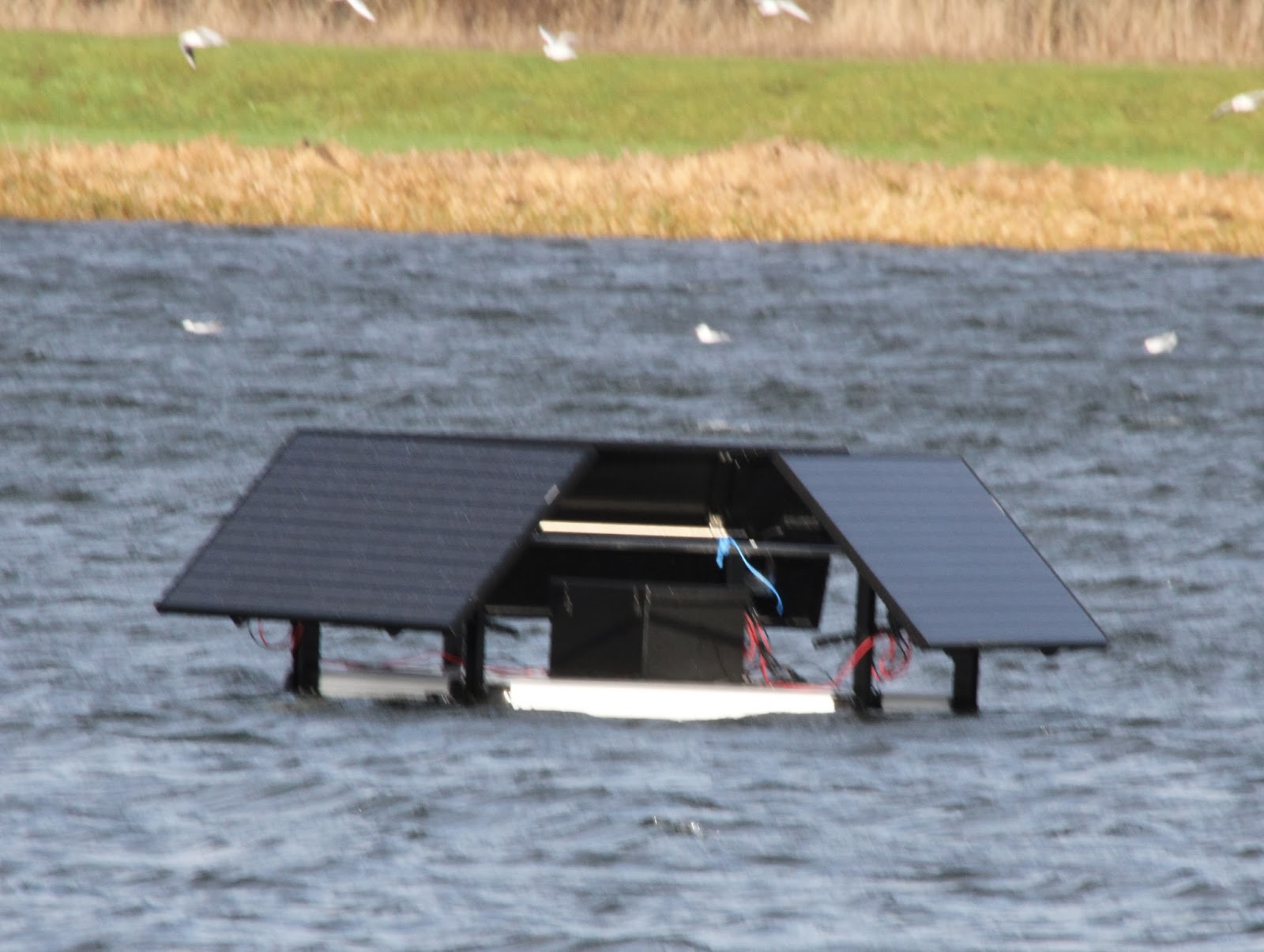 STRANGE CONTRAPTIONS
which have only appeared in the last couple of days and drawing everyone's attention. No few than 6 other visitors here asked me what they are, with the stock reply being "I was about to ask you the same question". Without exception, including myself, each thought they were Solar Panels which turned out to be right but only part of the story. Walking the cross-path between the 2 lakes (have to admit in search of Egyptian Goose an absentee from the Feb List) I encountered Chris Parnell, a name only known from his involvement with the Dorset Bird Club Website and his many Bird Records elsewhere. He had spotted, from the other side of the water, a female (known as a Redhead) Smew a tiny but beautiful (especially the male) Duck an infrequent visitor to these parts. Having seen one this year makes it no less valuable as a 'must see' bird, so together we started a search to relocate it. The long staying 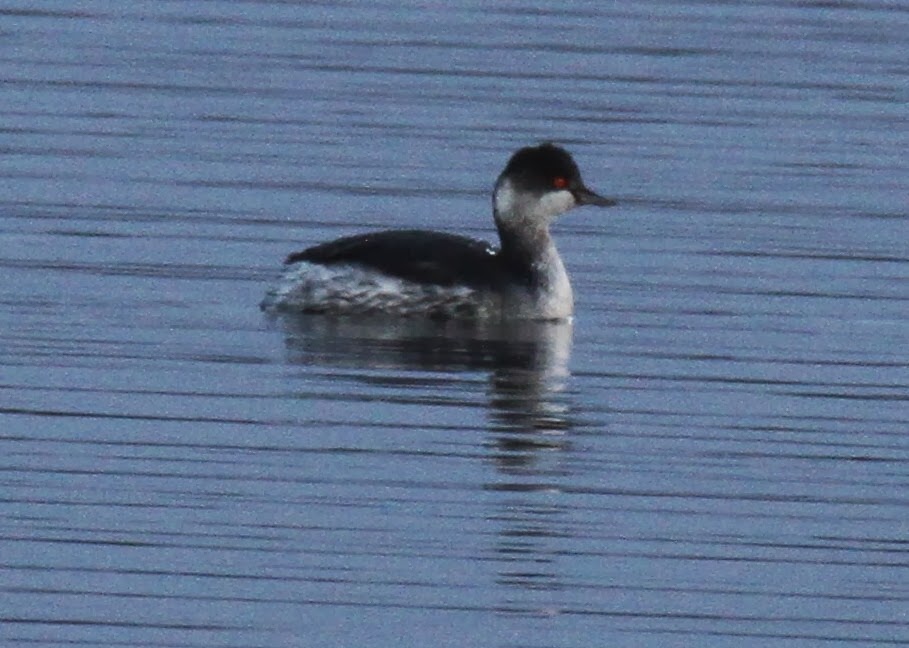 BLACK-NECKED GREBE
was soon located, but the object of our desires was proving far more difficult. After a fairly long passage of time Chris declared it must either have flown away or he could have been mistaken (unlikely knowing of his reputation). At that point we parted company with me continuing the search and getting caught in an almighty rain squall. It must have been this change in the weather that put most of the Ducks, we had been scrutinising, to flight. Not from among this bunch but some way off the 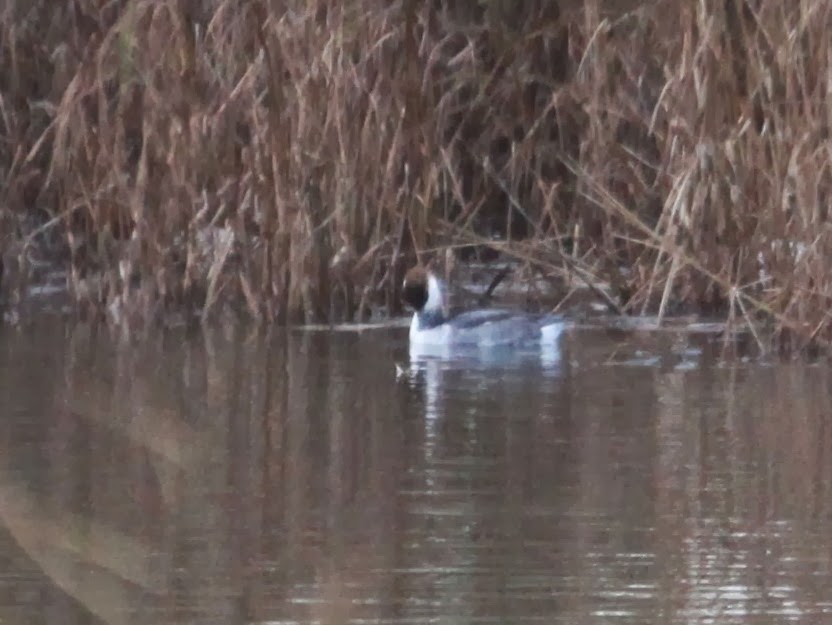 SMEW (in company with a male Teal) flew straight past me
disappearing across the water meadows to the north.
This image, with head bowed showing the 'red' crown, is from the archive.
That's when the Assistant Water Bailiff drove by doing his daily 'rounds' and an opportunity to solve the conundrum of the floating 'panels'! The solar panels are the power source for underwater sonic transducers, left continuously running, to destroy the algae which in turn is killing the Fish stocks - problem solved.
Sunday 2nd February 2014
With the wind still firmly in the southern quarter it was the fresh breeze that brought a noticeable chill to the weather today. Having said that, it was also bright and sunny so with the hood up a great day for wandering around Longham Lakes and Avon Causeway again. Main feature and new arrivals at the lakes were c15 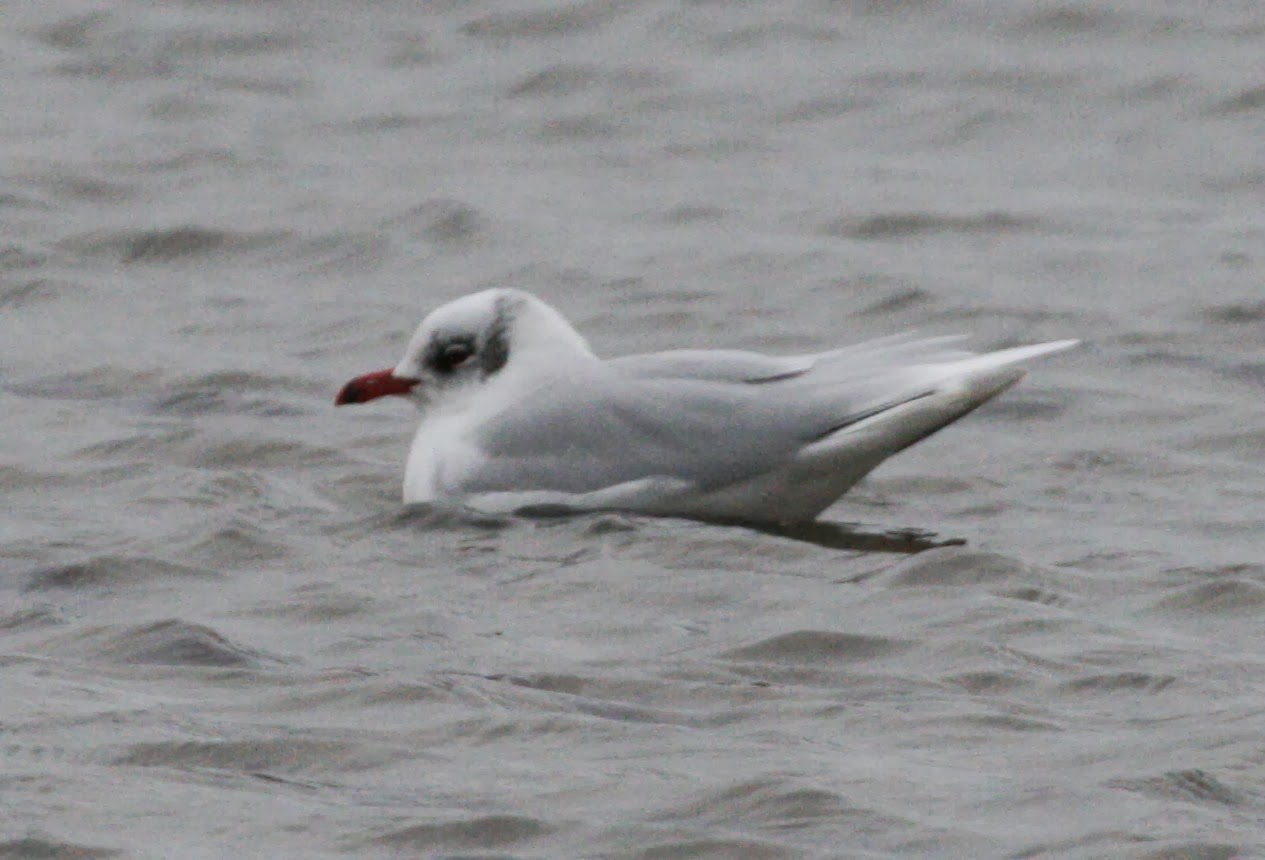 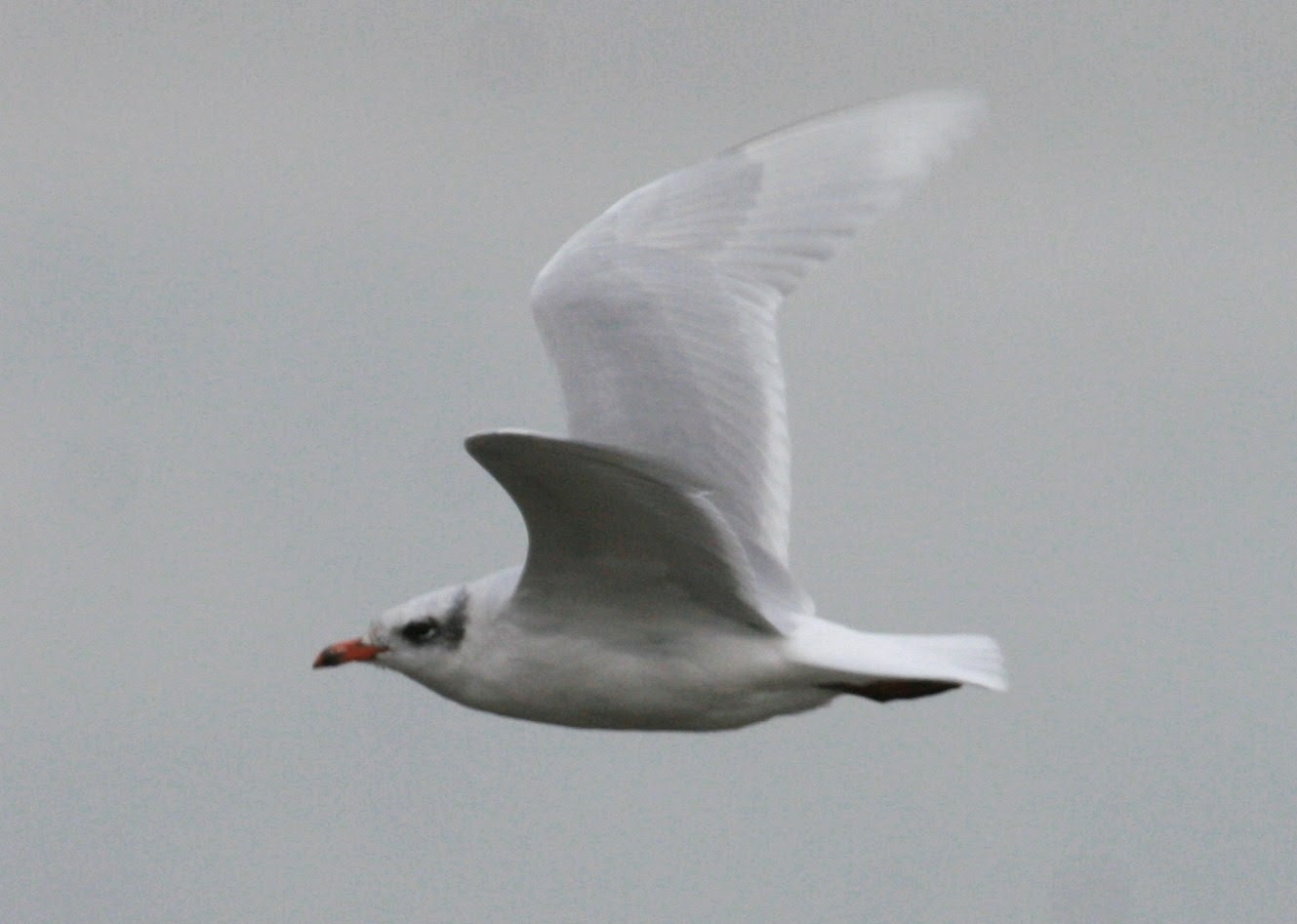 MEDITERRANEAN GULL
a species I don't remember seeing here before.
It may surprise the reader to know that a Longham List is not kept! 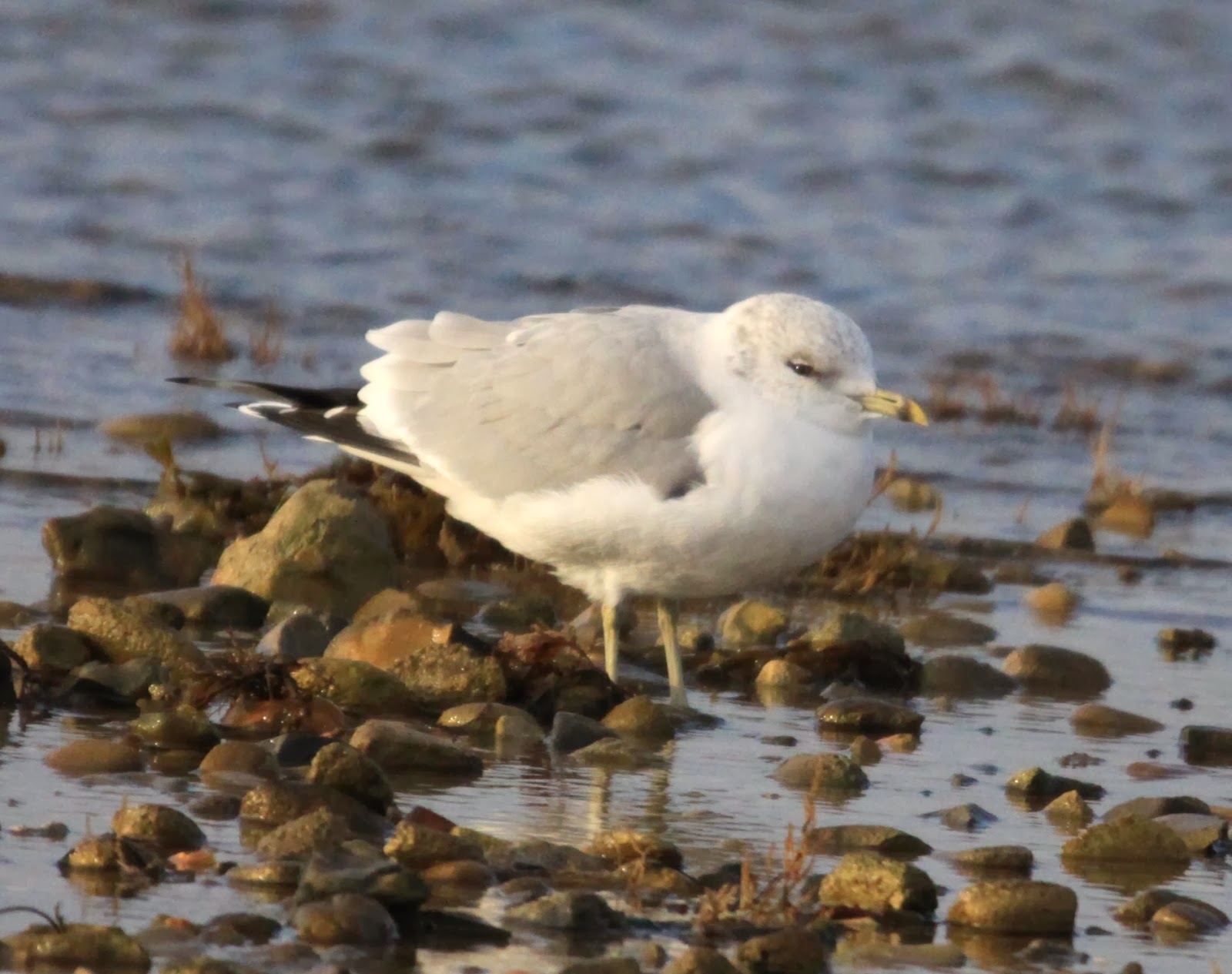 'Gulls' continued the theme with just a couple of
COMMON GULL 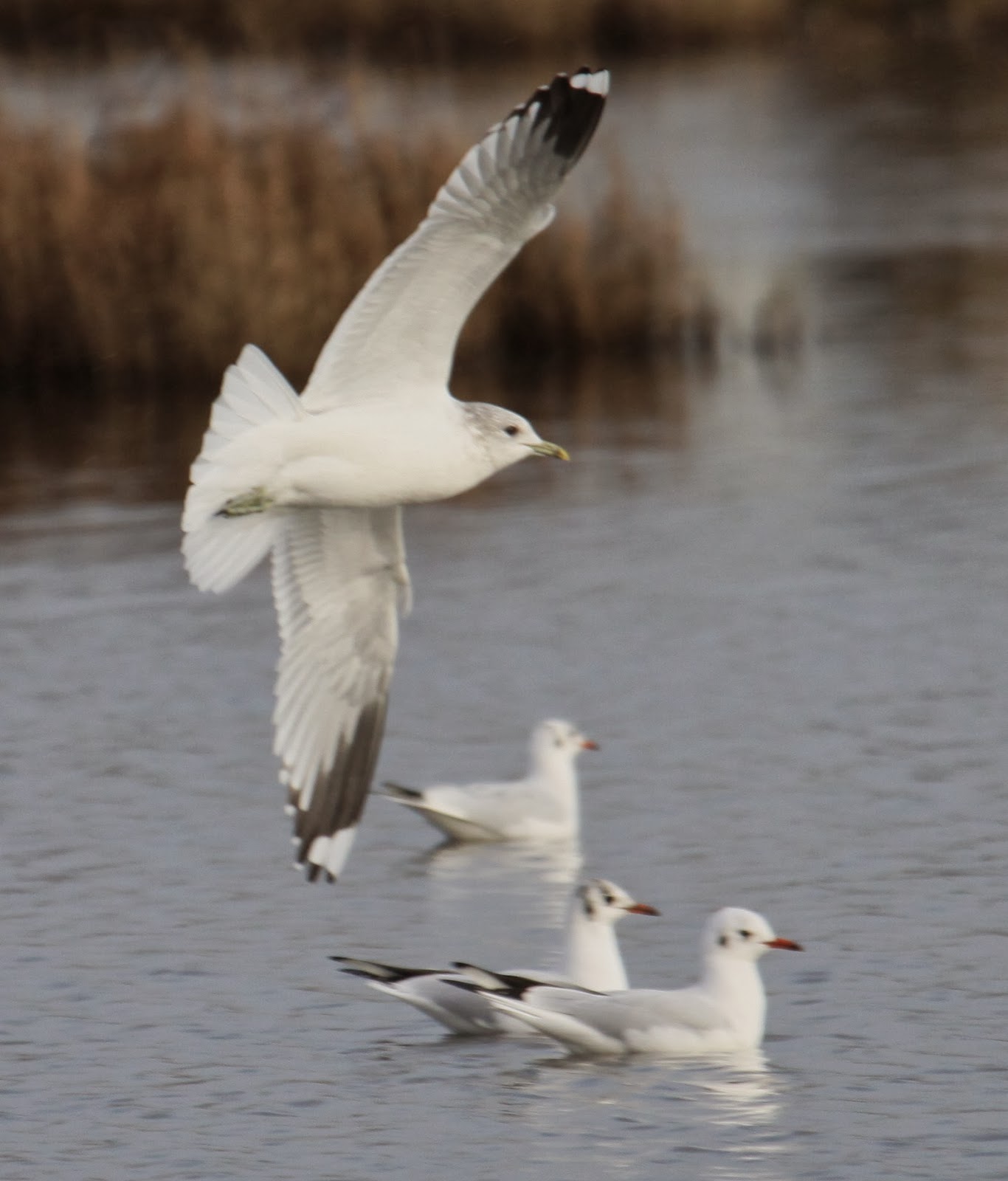 mixed in with those mentioned above.
COMMON GULL
(overflying Black-headed Gulls)
but within minutes of arrival all took to the wing and disappearing towards Christchurch Harbour.
On to the Avon Causeway, where there had been a noticeable
drop in the flood water level, and again 'Gulls' featured. 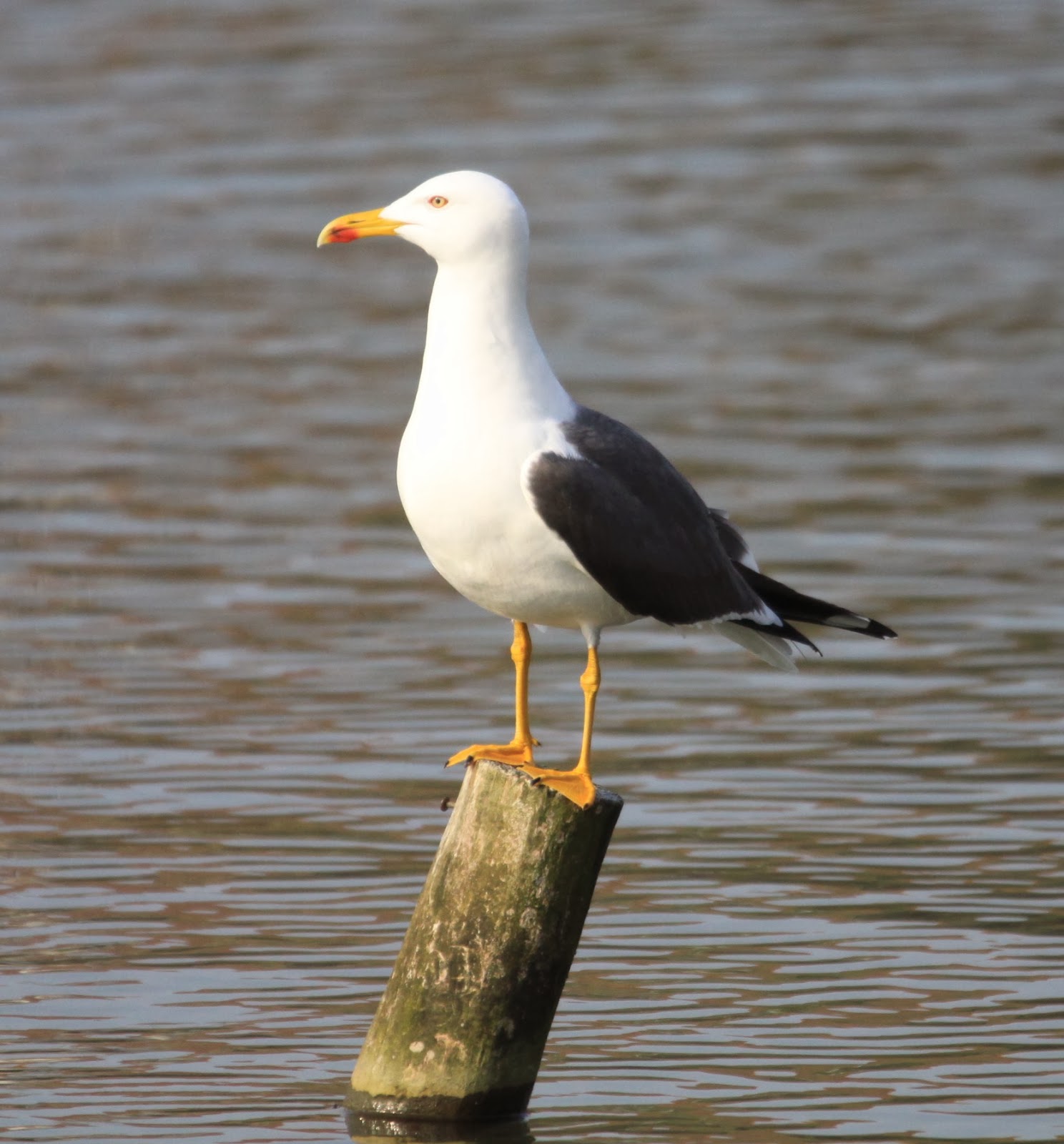 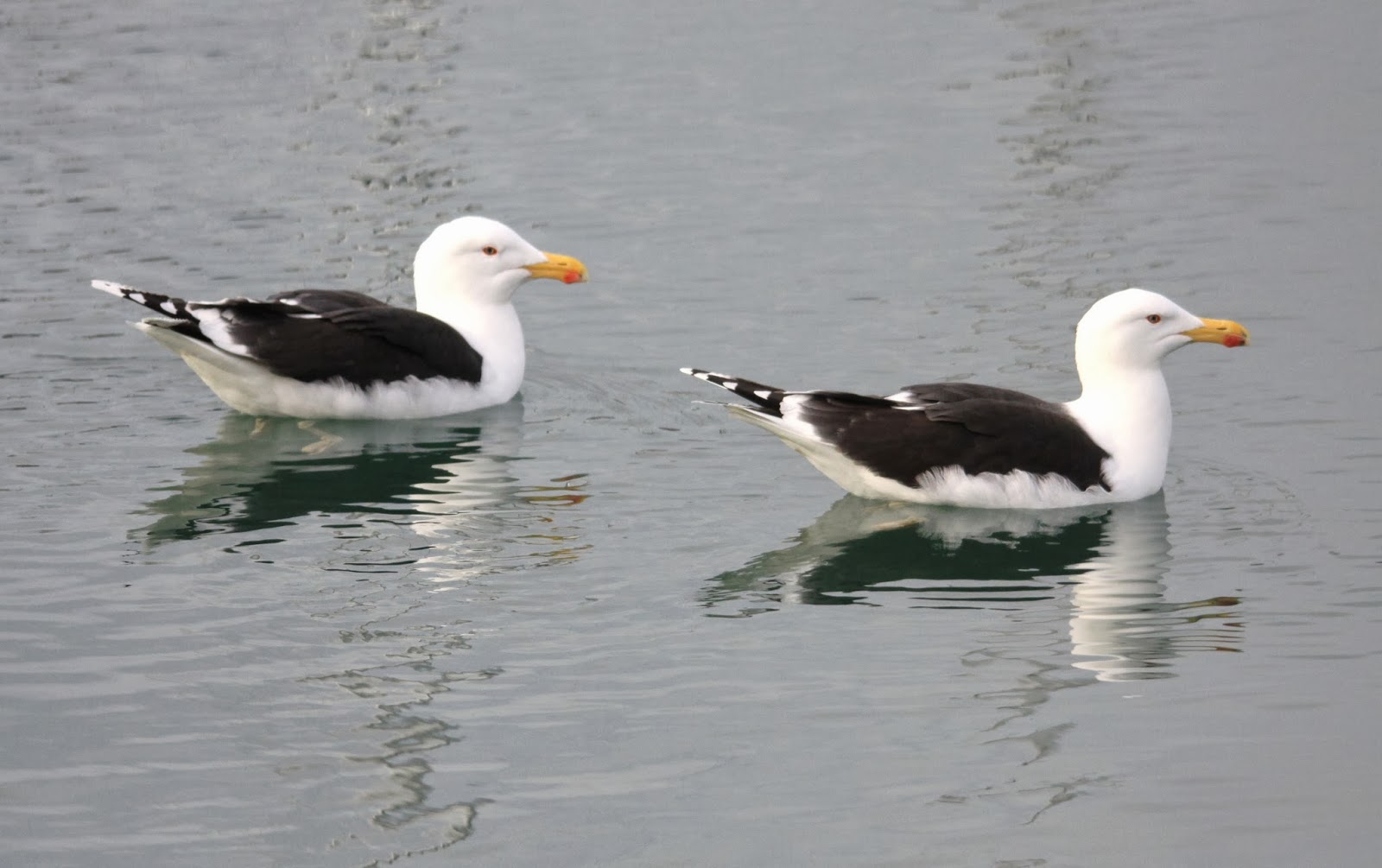 GREAT BLACK-BACKED GULL
In addition the number of 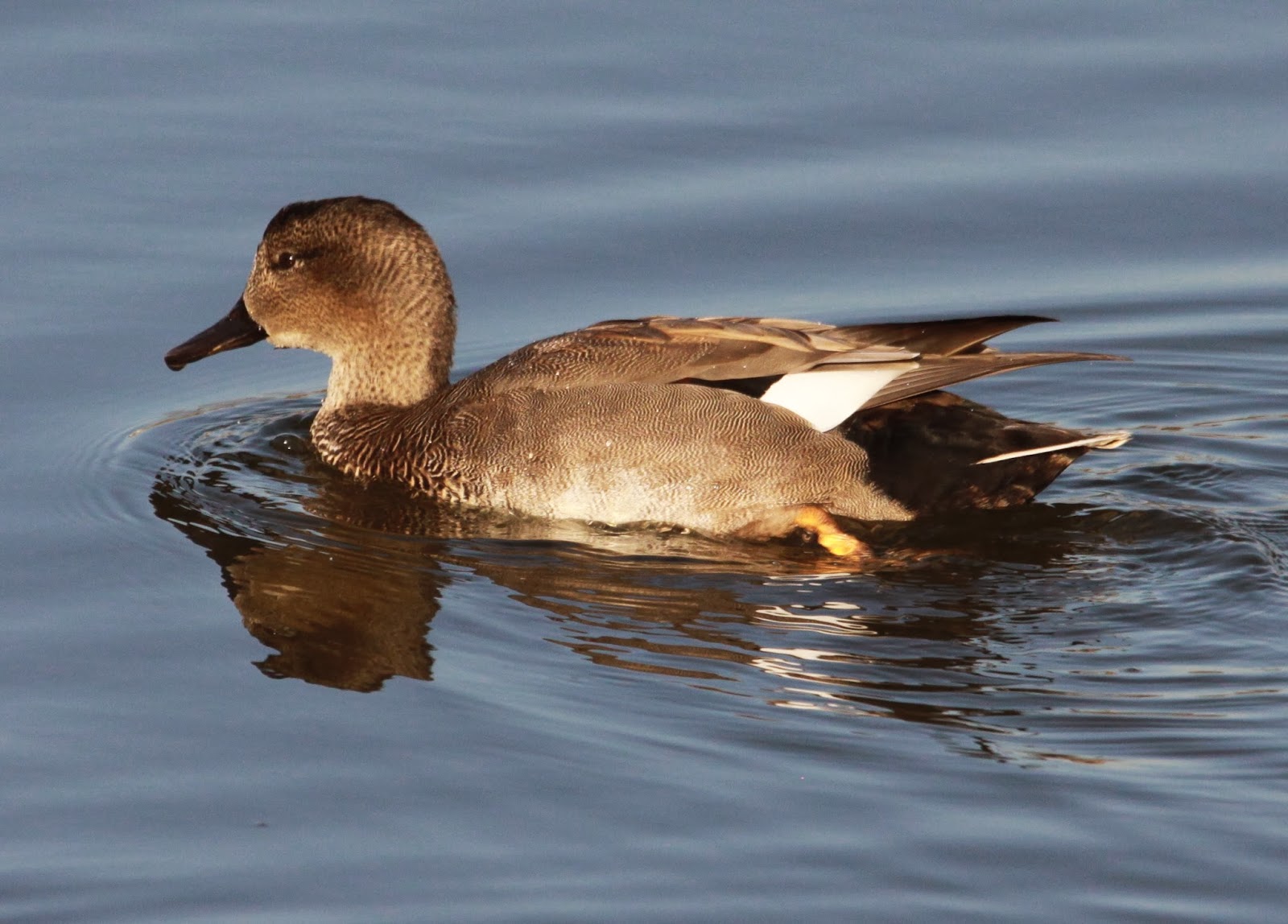 GADWALL
had increased to a dozen.
Finally, there was a tiny Moth flying around the kitchen, easily caught but escaping before the photographing could take place. With the image in mind, this is the closest we could get to an identification. 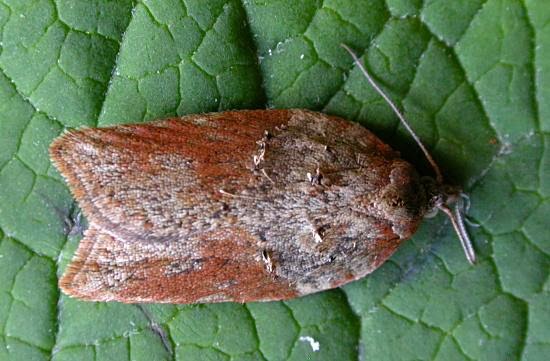