On the Beach - Cliff Richard and the Shadows

Rock 'n' Roll Trivia
When first formed the group was called Cliff Richard and the Drifters but in early 1959, to avoid confusion (and threatened legal action) with the contemporary American R and B vocal group of the same name, they changed to the Shadows. Only 2 of the Drifters played on 'Move It' their first 'hit single' (not No.1) while none of them were destined to become Shadows. Are you asleep yet?

Last night both the 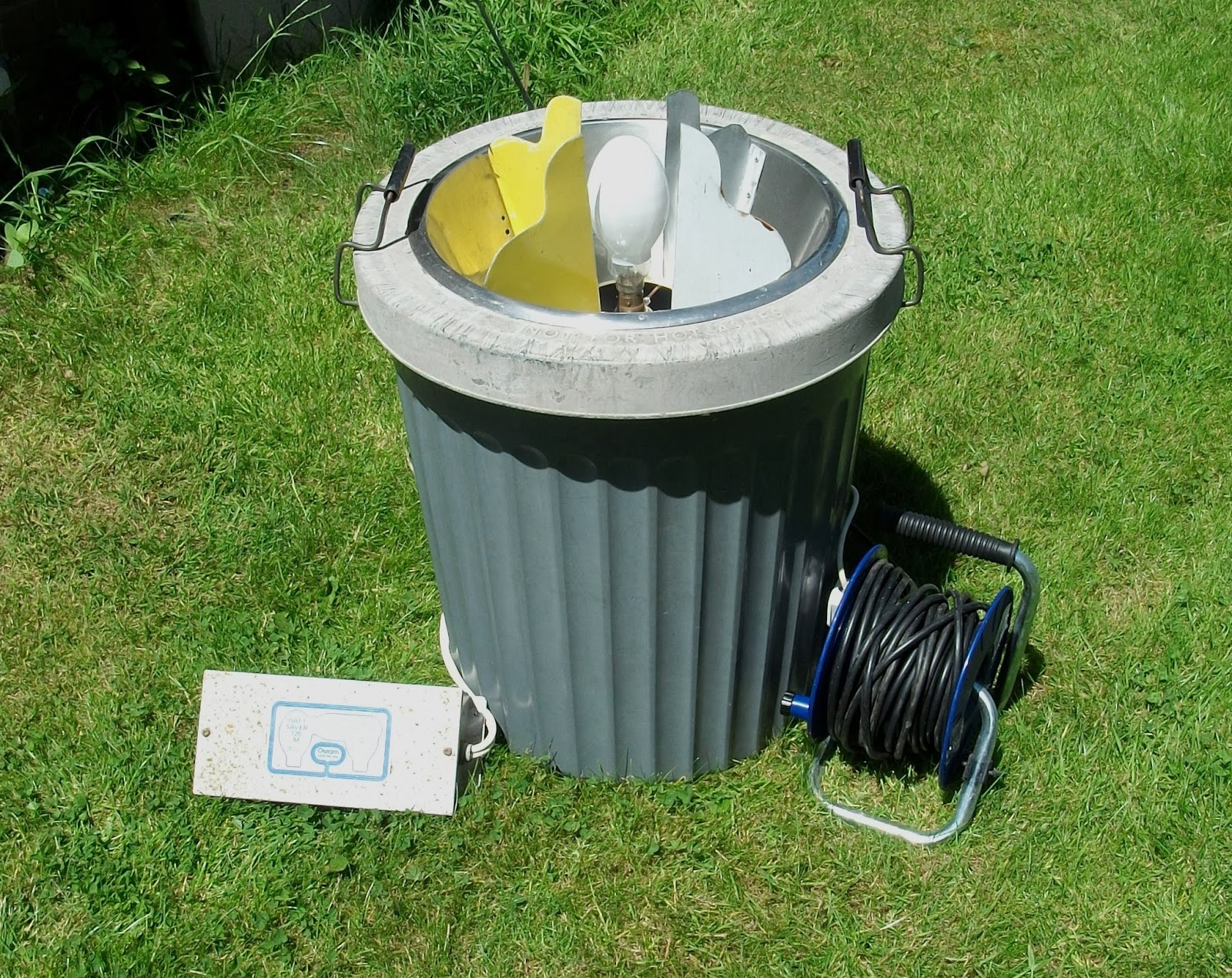 ELECTRIC DUSTBIN
and one of the professionally built 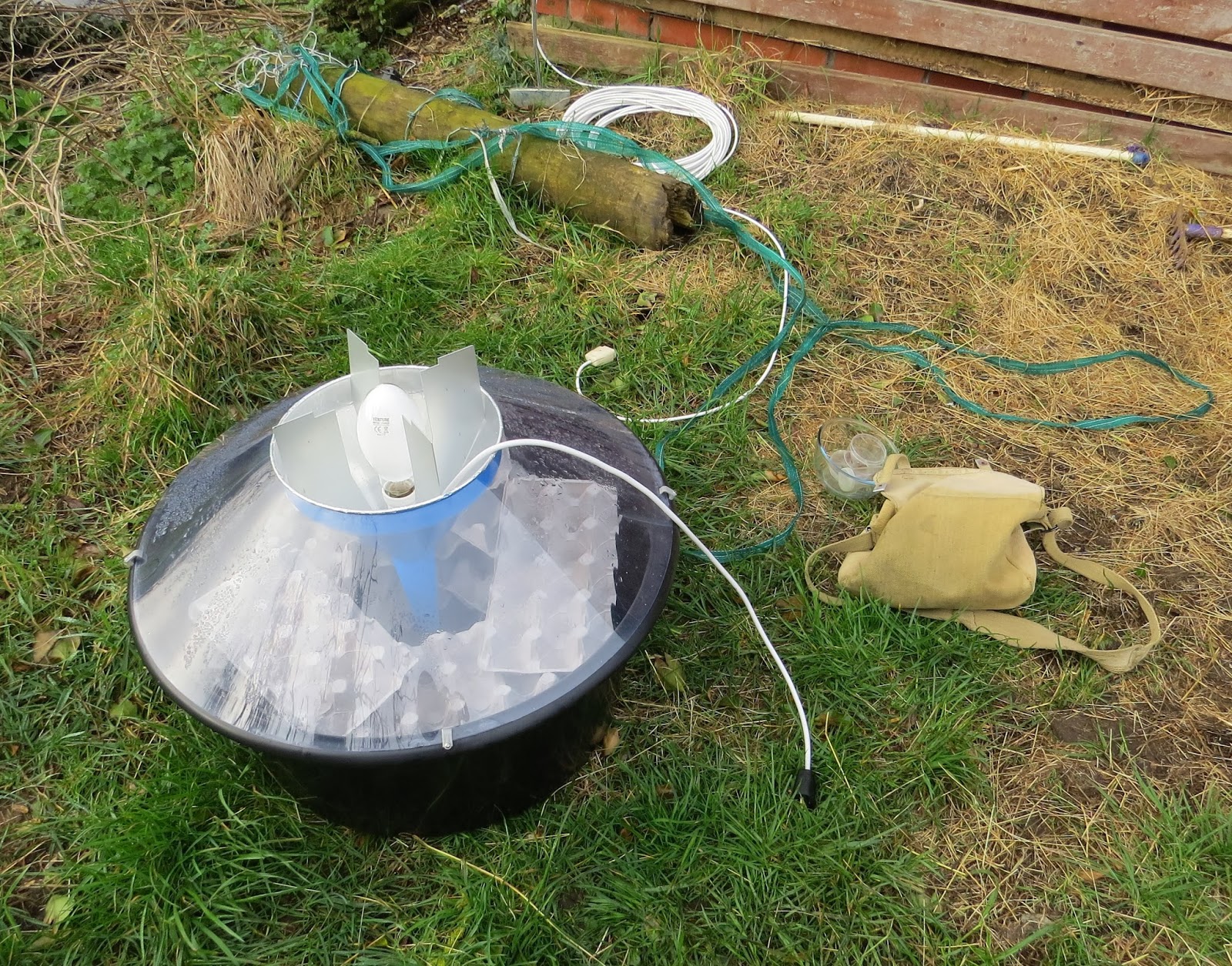 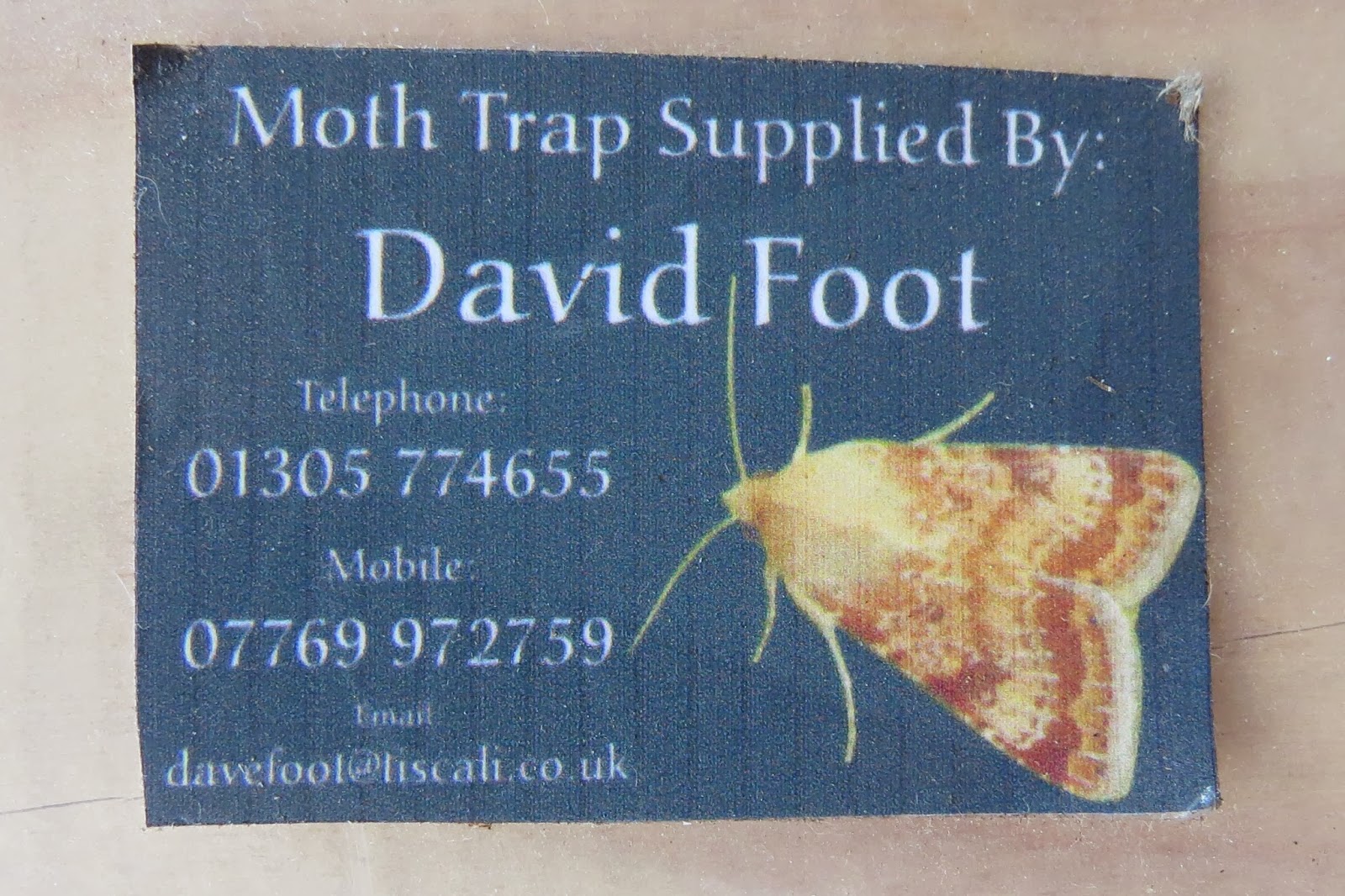 (advertisement)
YOU MIGHT AS WELL BUY THE BEST!
were activated, again with a degree of success. 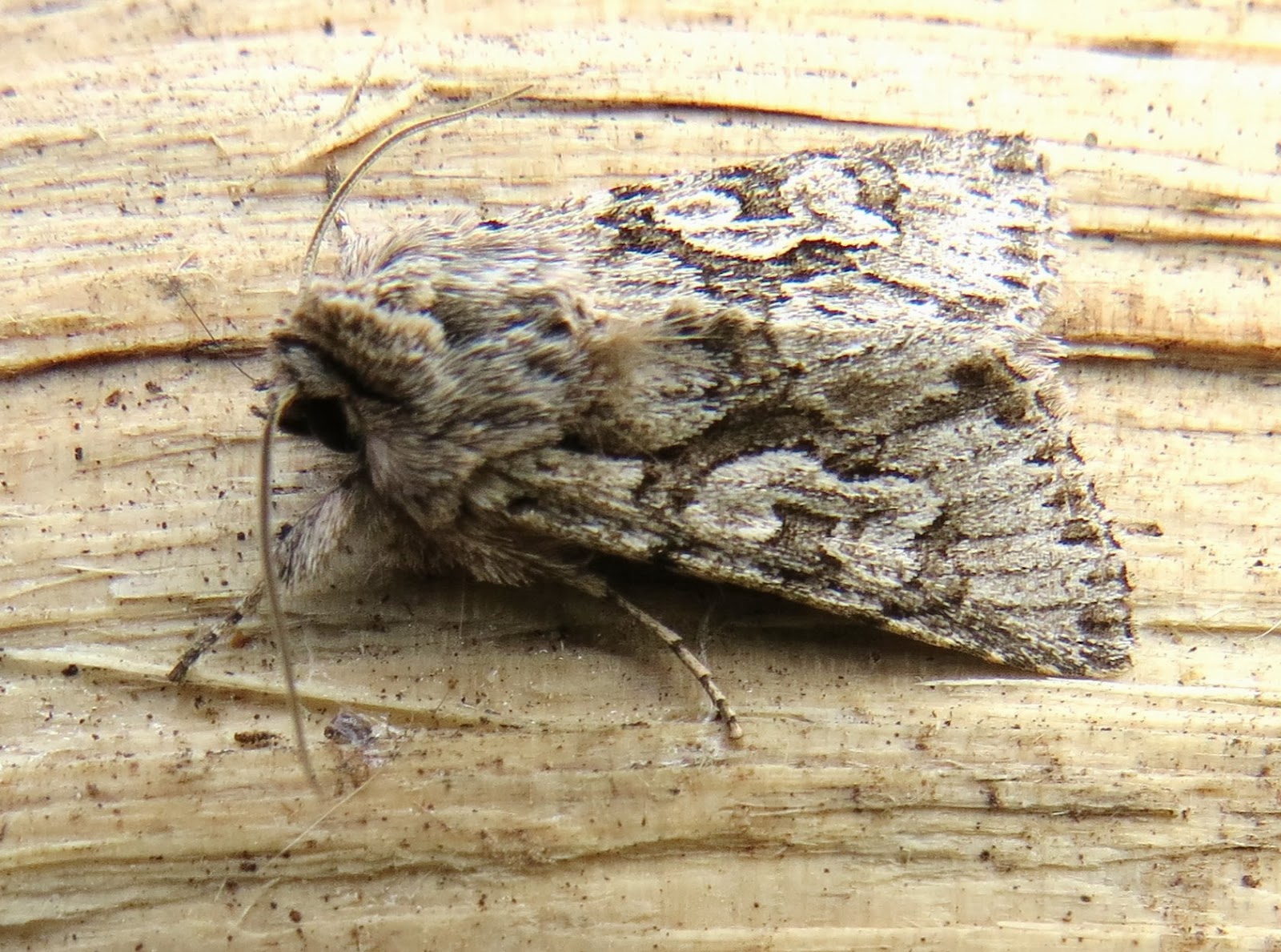 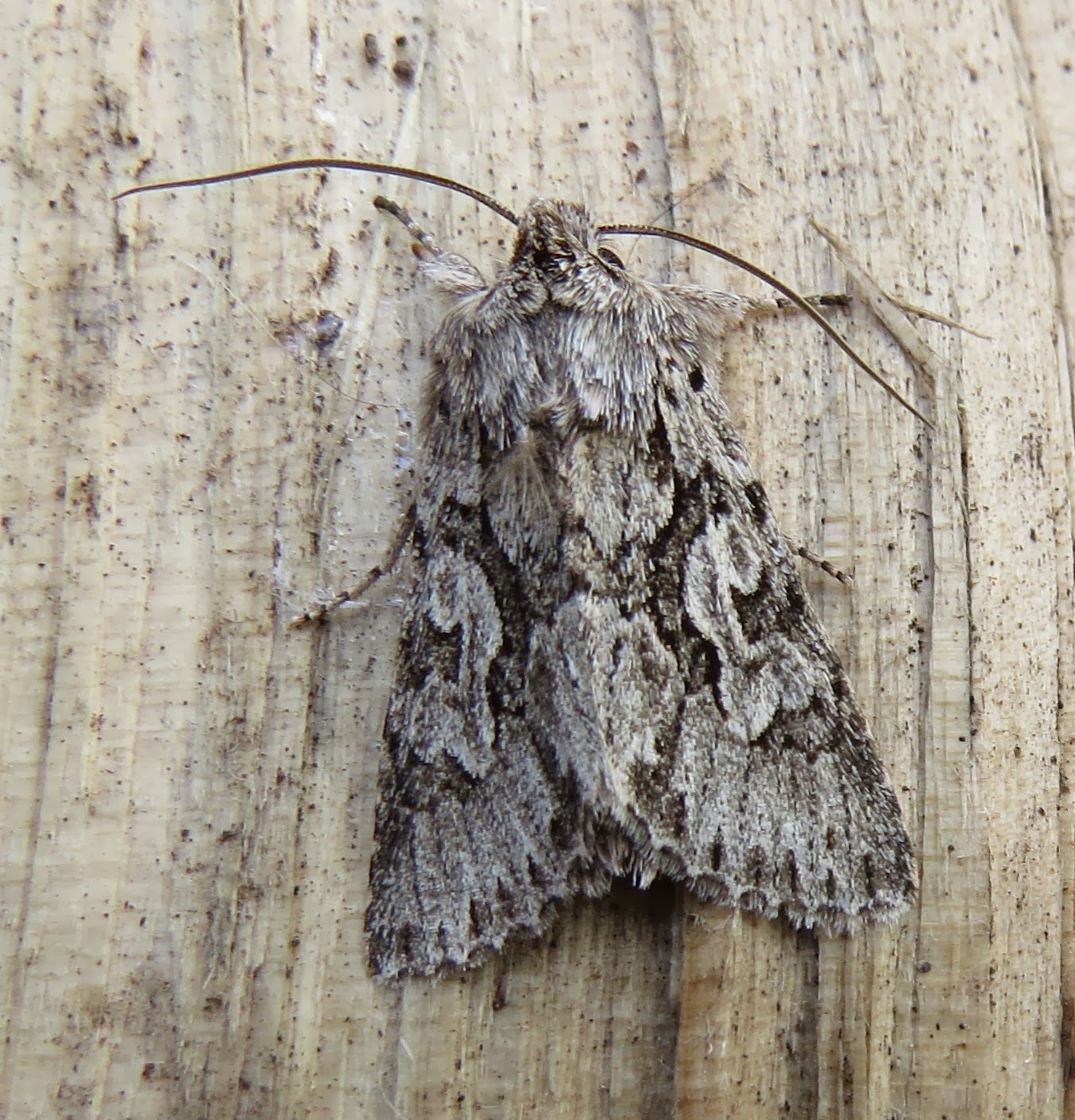 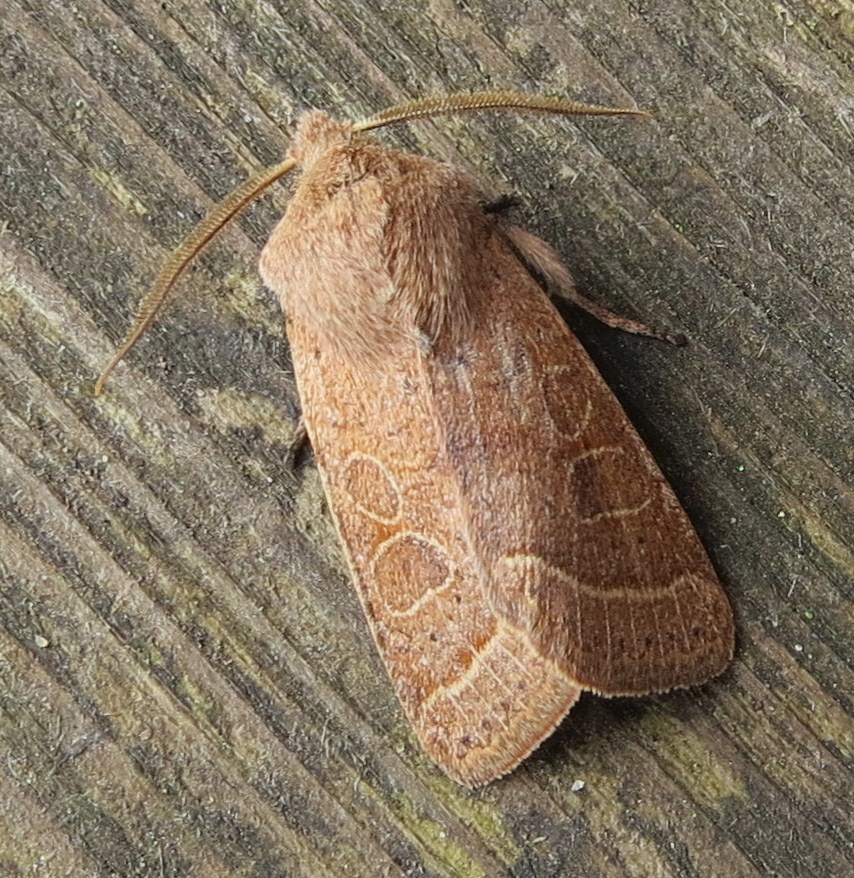 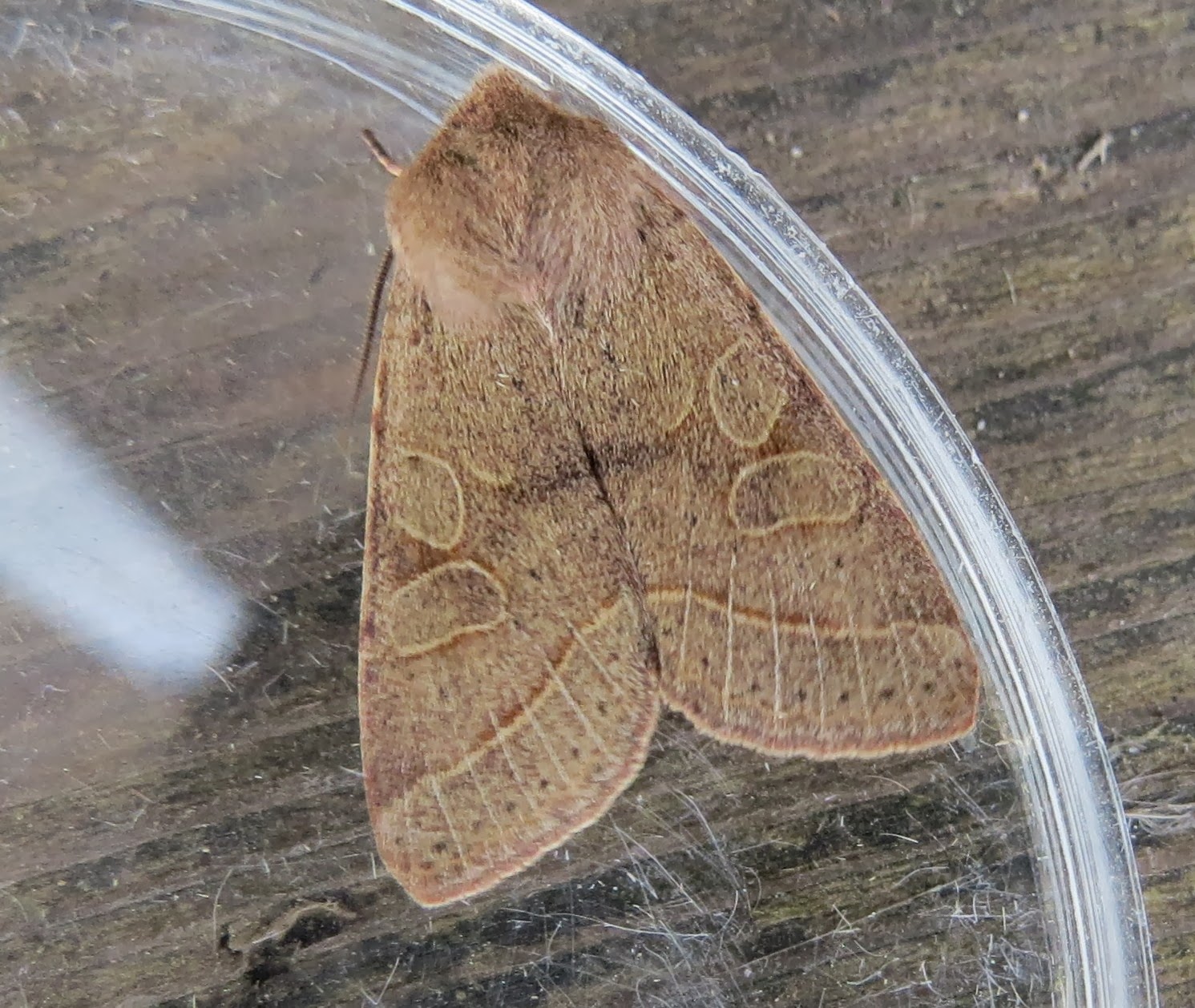 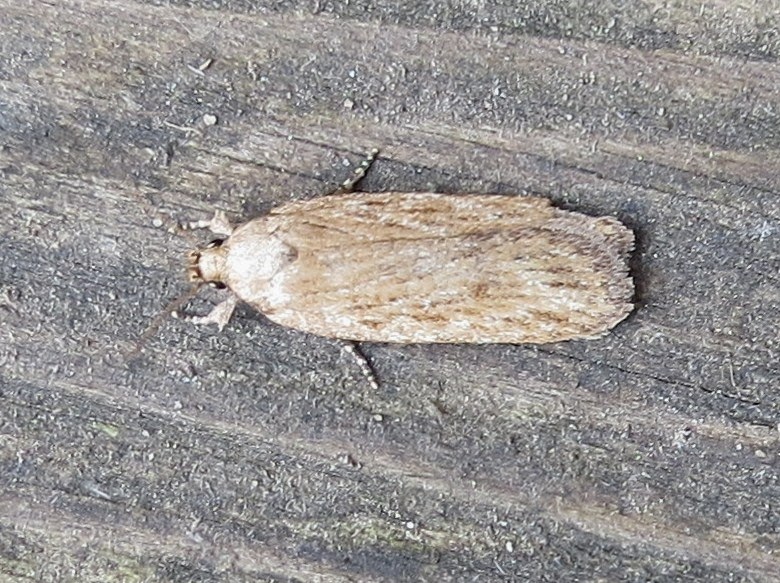 Depressaria daucella
increased the Macros (we don't do Macros??)
A bit of a 'catch-up' on recent outings during which time both Avon Causeway and Longham Lakes have been visited more or less on a daily basis. The later still hold a few Waterfowl, including the long-staying Black-necked Grebe while the suggestion from other quarters of a Slavonian Grebe there has past without further evidence. Meanwhile, across the previously 'flooded'

alongside the River Avon there remains much interest for the 'birder' in all sorts of directions. A Common Buzzard continues to scavenge the drier margins as c2 Peregrine are still terrorising anything with feathers. Other occasional Raptors include Marsh Harrier and Kestrel with Wildfowl still represented by all of those mentioned on Tuesday's Post, with the exception of the Egyptian Goose. Of the Waders, Lapwing numbers now seem very much reduced but a single Redshank was seen in recent days along with c2 Ruff on one visit. The 'show-stealers' though are the huge flock of 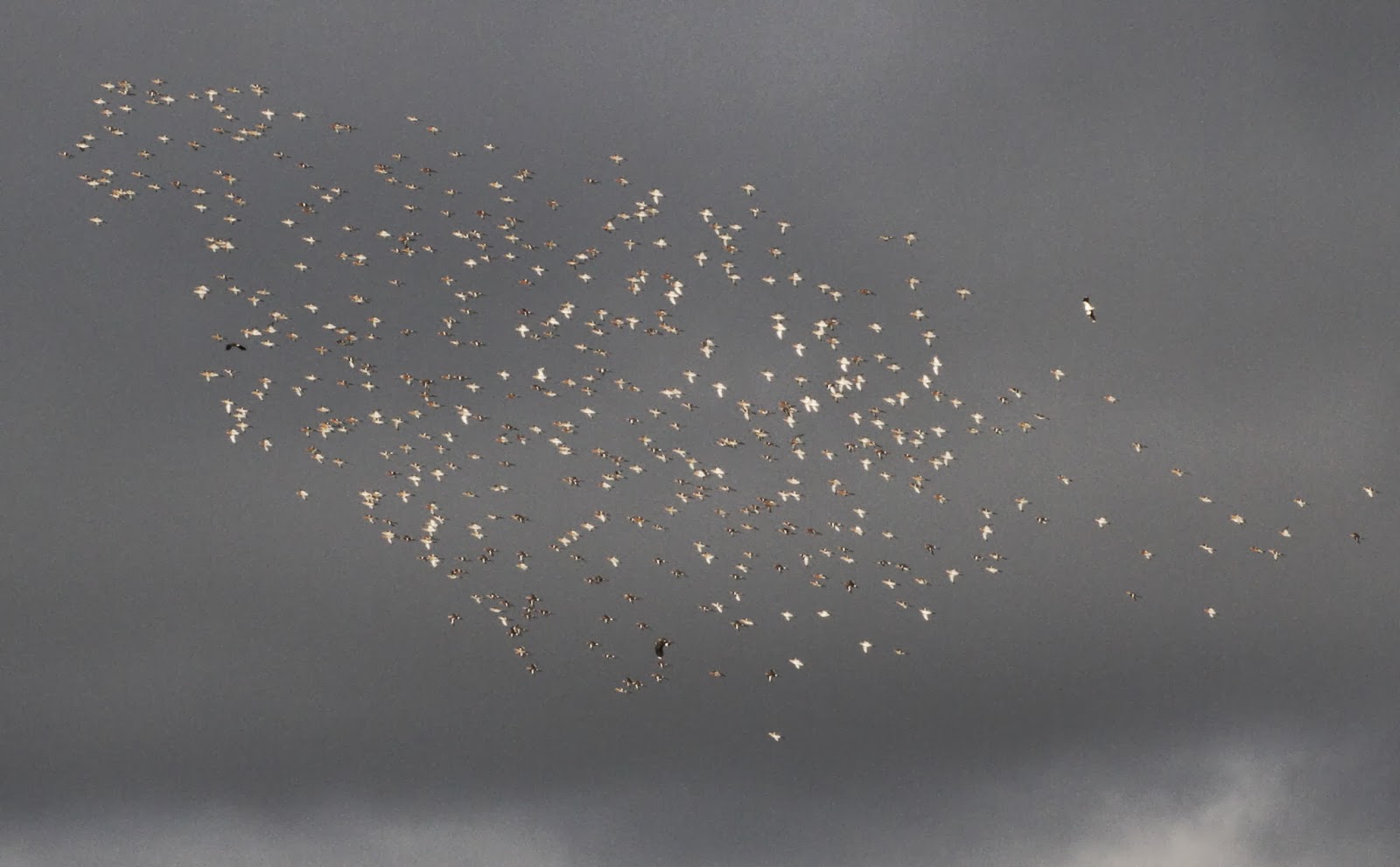 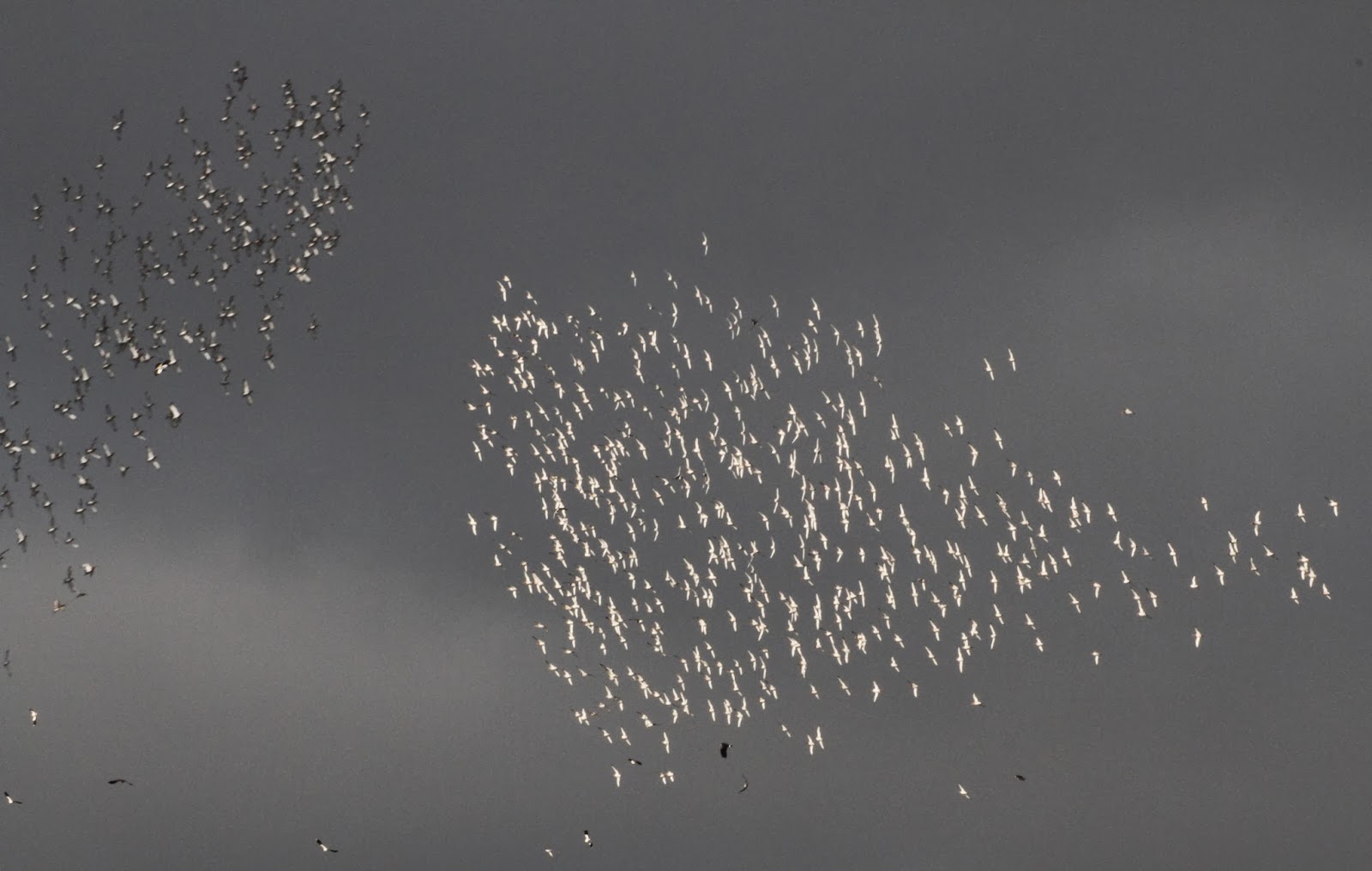 which on Monday obliged by feeding just a few hundred yards from the roadway. 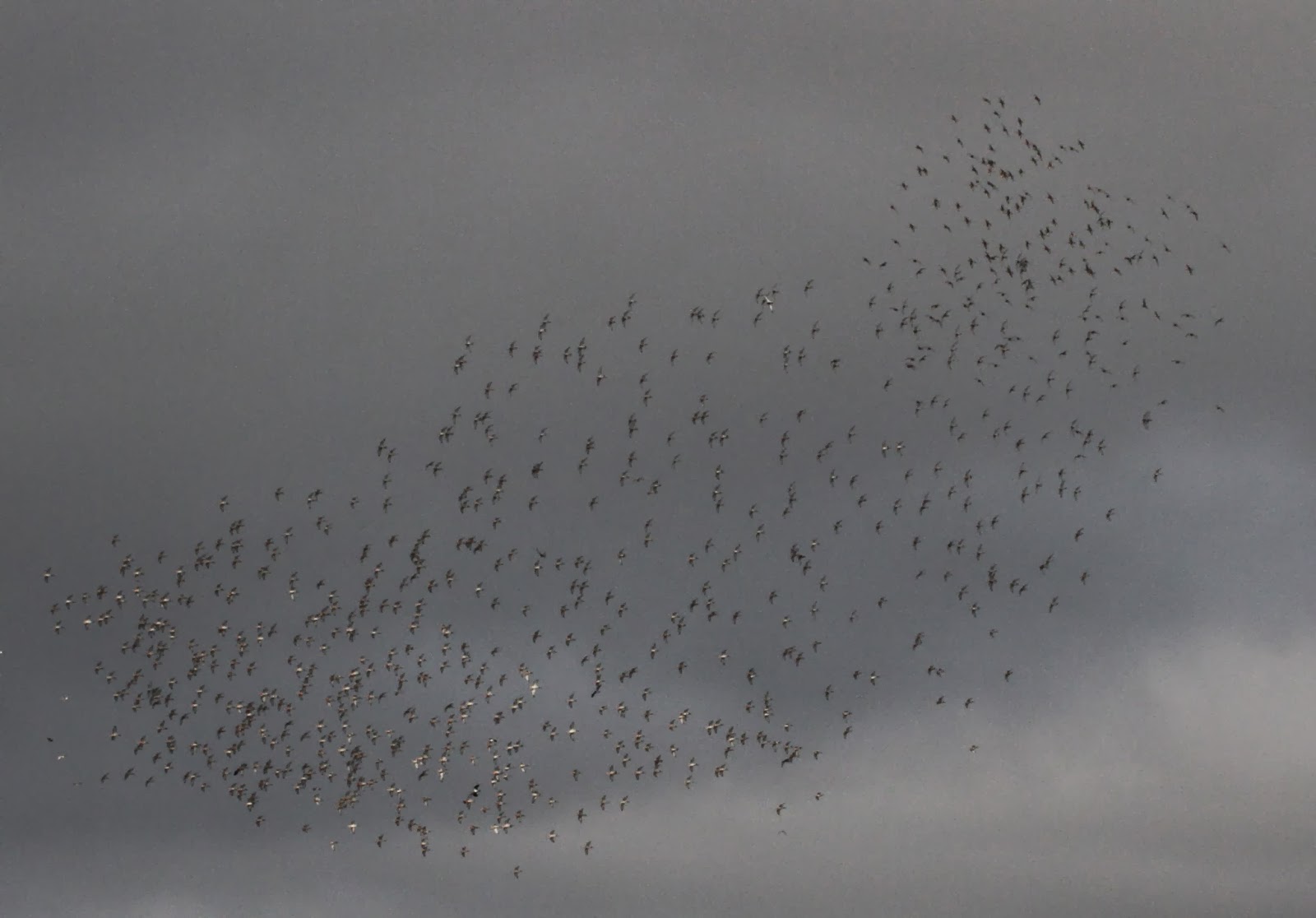 This gave opportunity for a sensible and reasonably accurate count, 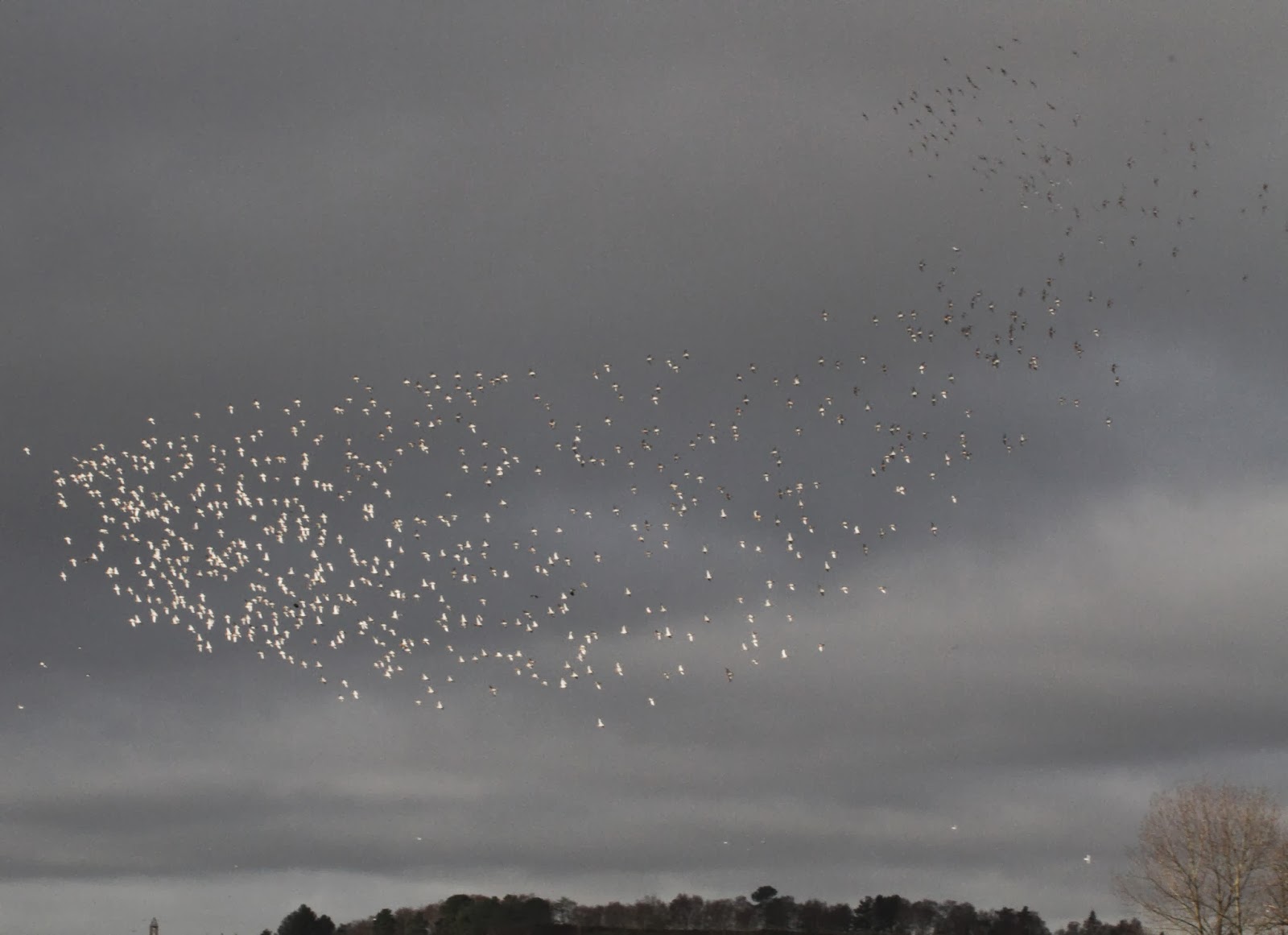 reaching c600 before they were once again spooked from above. As they took to the wing about 100-150 uncounted birds flew into view making it plausible to suggest at least 700 individuals are present. Of the others, Cetti's Warbler and Goldcrest remain vocal, a single Kingfisher was spotted and a few Fieldfare have been seen feeding in the vicinity but no sign of the (American) Green-winged Teal in recent days.
What must sure qualify for the best quality species to over-winter in the County have to be the 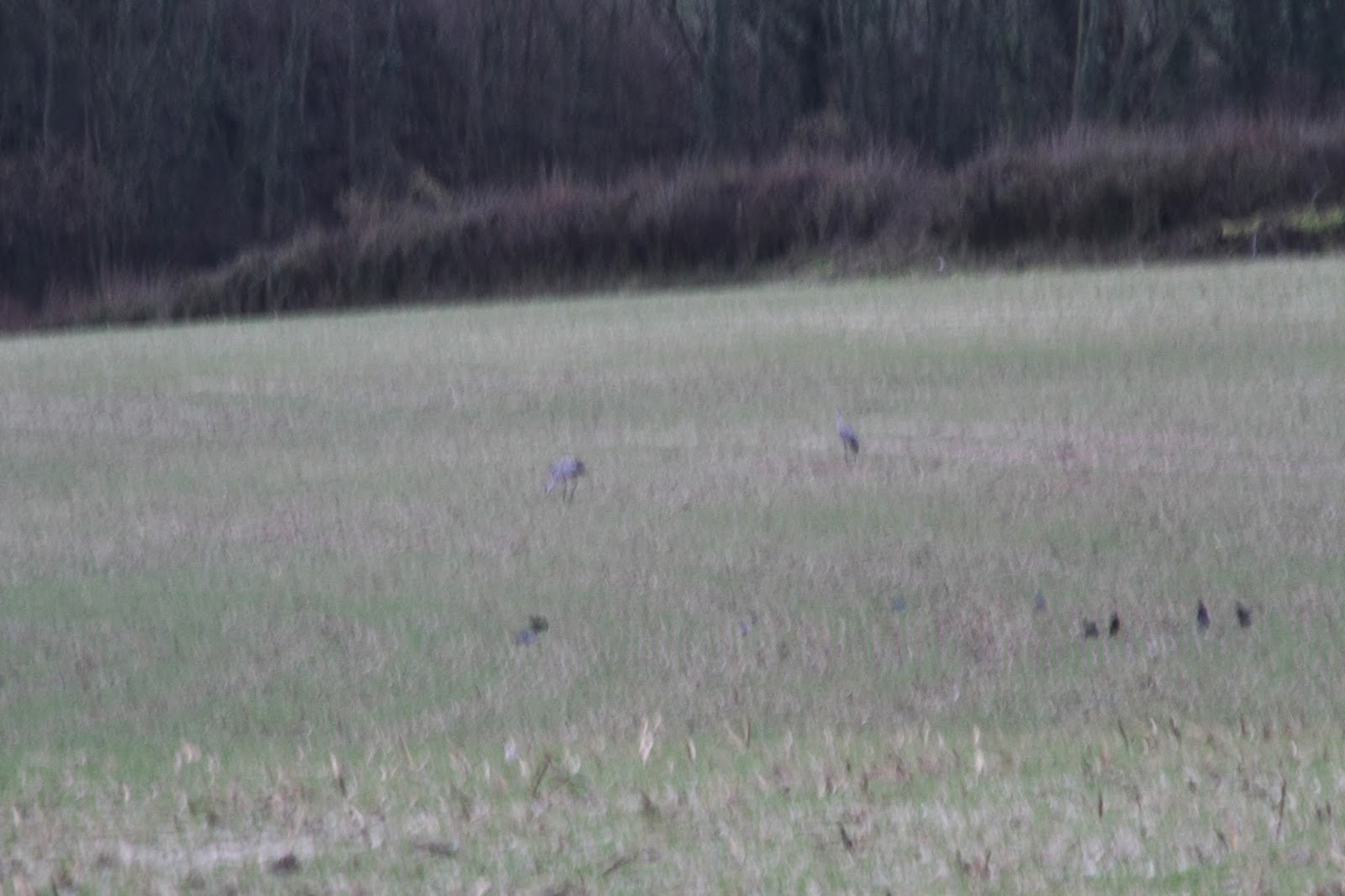 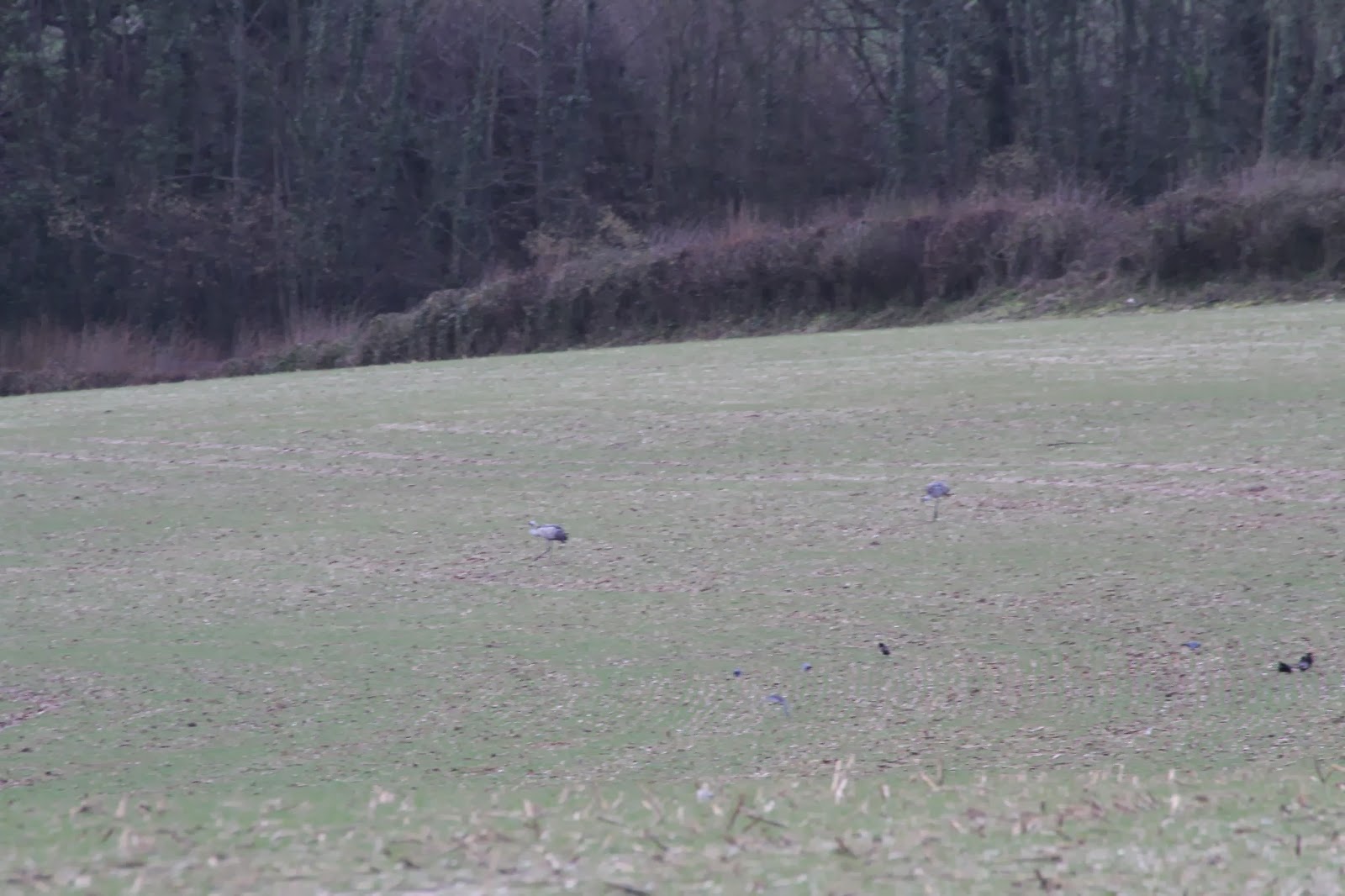 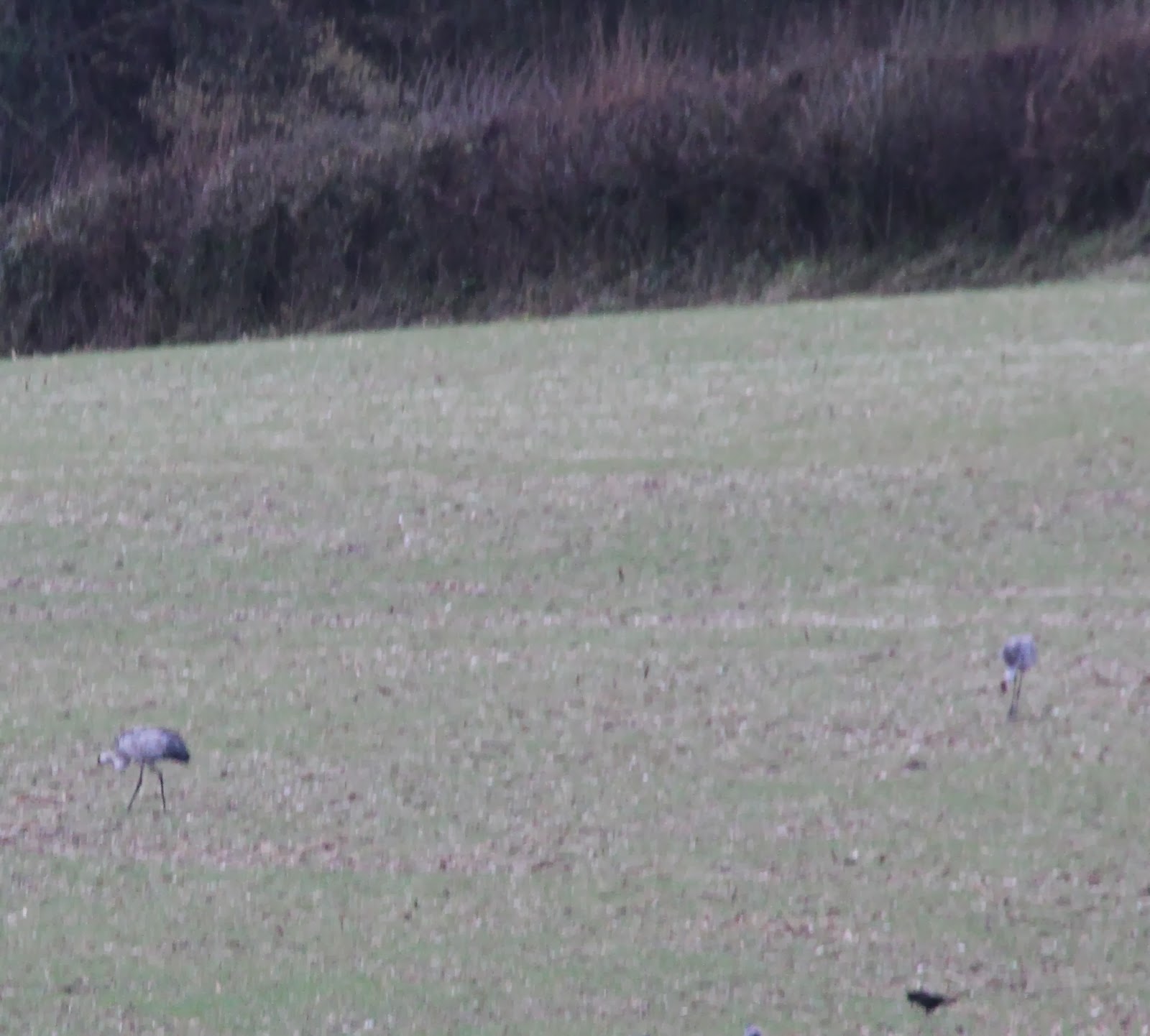 Personally, they increased the 2013 Year List as well as having
been added to the last 4 'ongoing' Dorset Month Lists and must
have brought a good deal of joy to many other observers.

Unfortunately, they have not been seen by myself at close quarters,
but through the telescope make a dramatic sight.
The following 10 images are © Bomber and Annie. 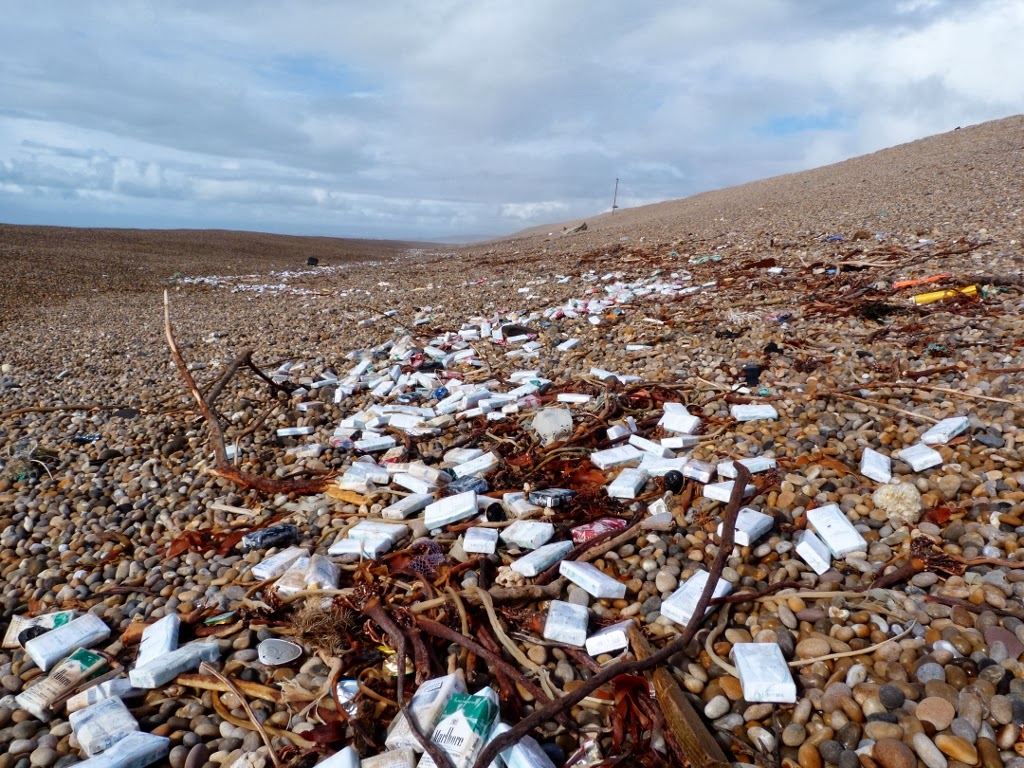 The recent storms have brought havoc to our shores and elsewhere, 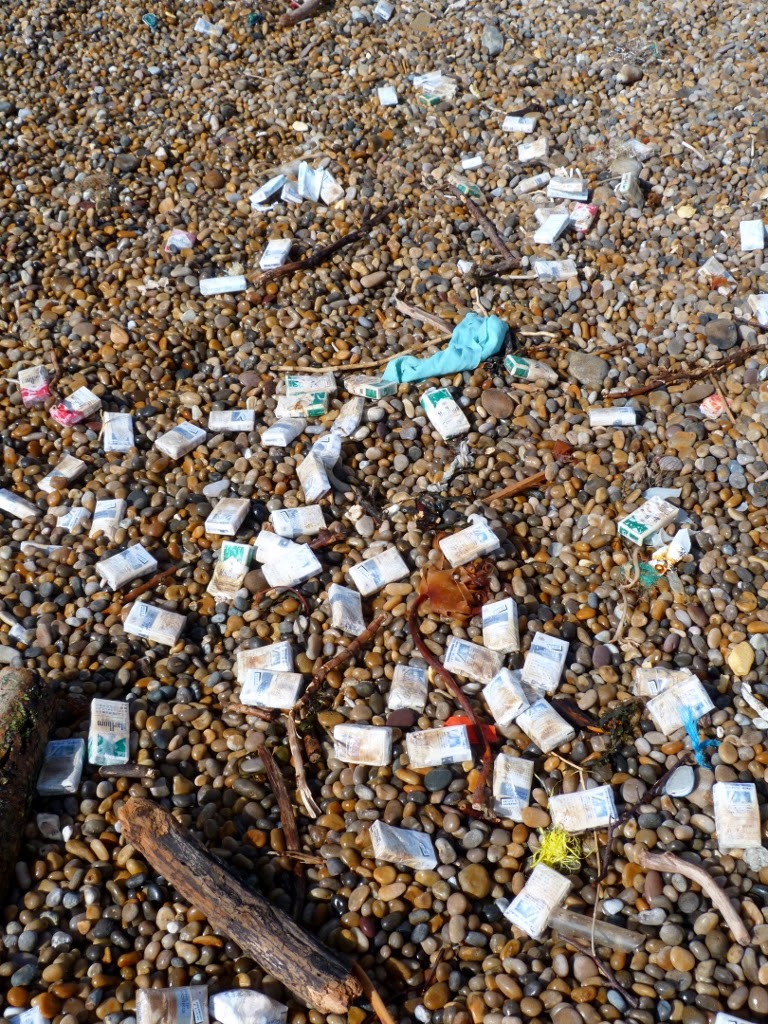 with one report of c11 Cargo Containers being lost in the
Bay of Biscay alone. Maybe then, the origin of the 'thousands' of 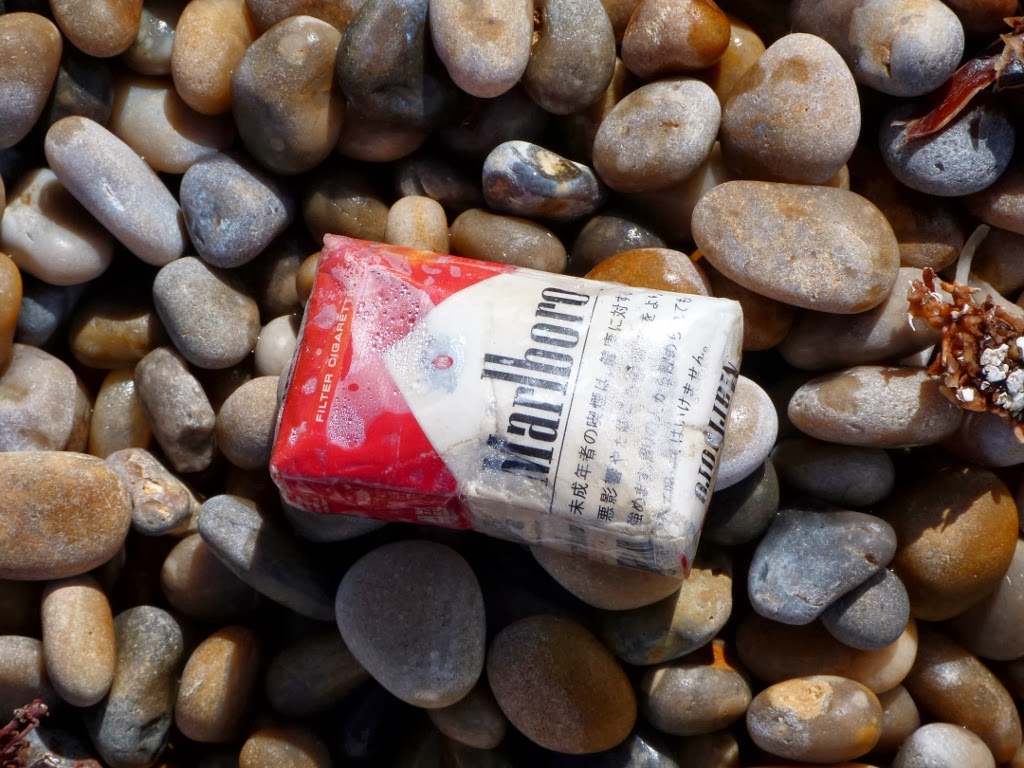 Packets of Cigarettes strewn along the Chesil Beach?
Seabirds too have been badly effected with 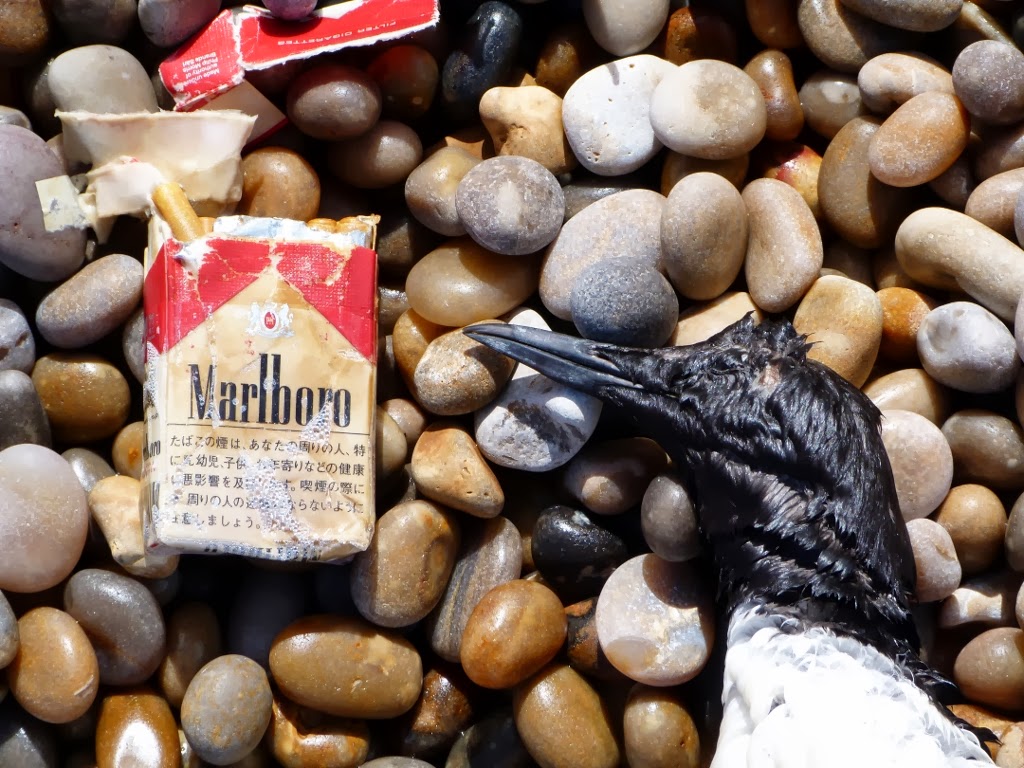 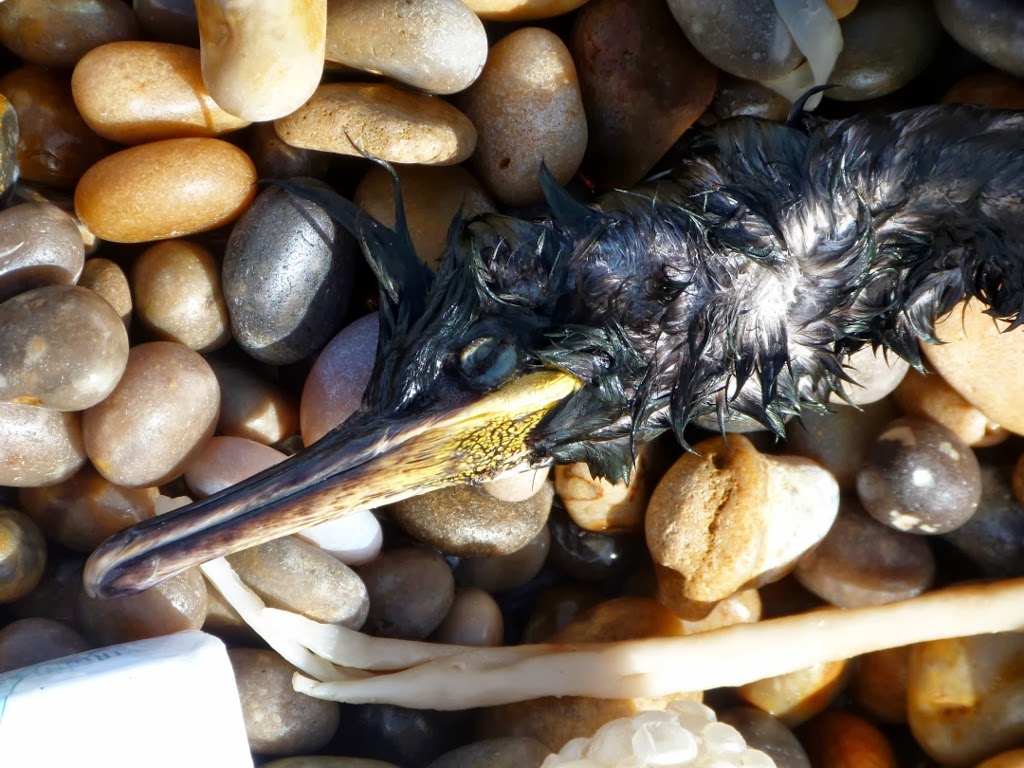 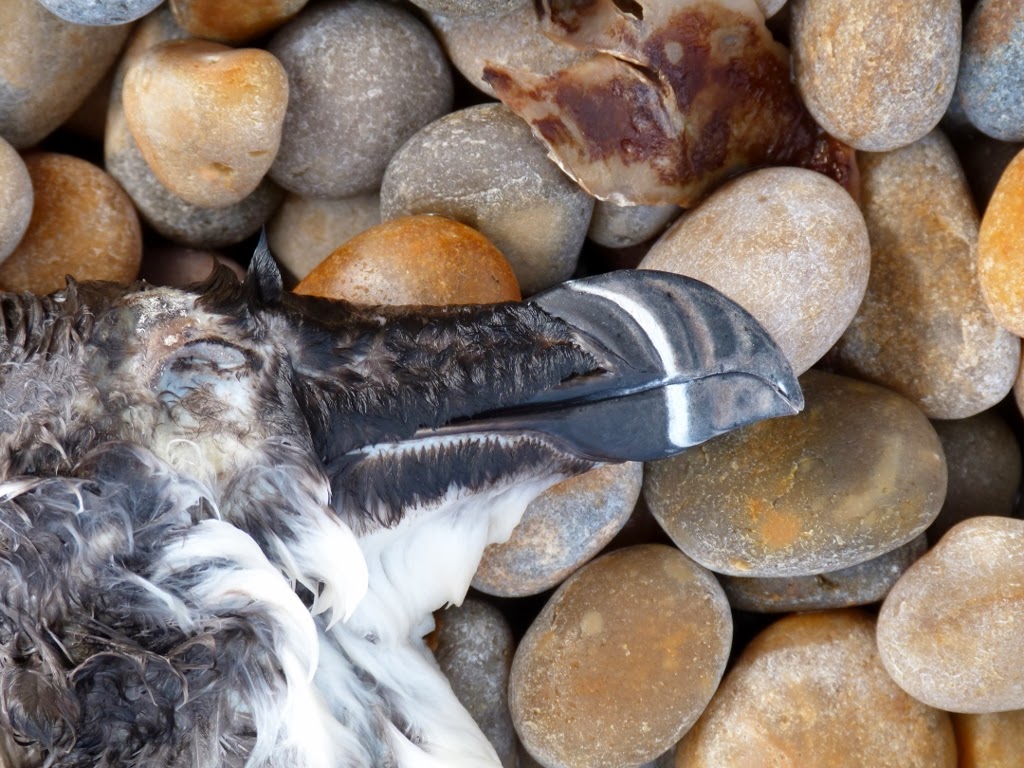 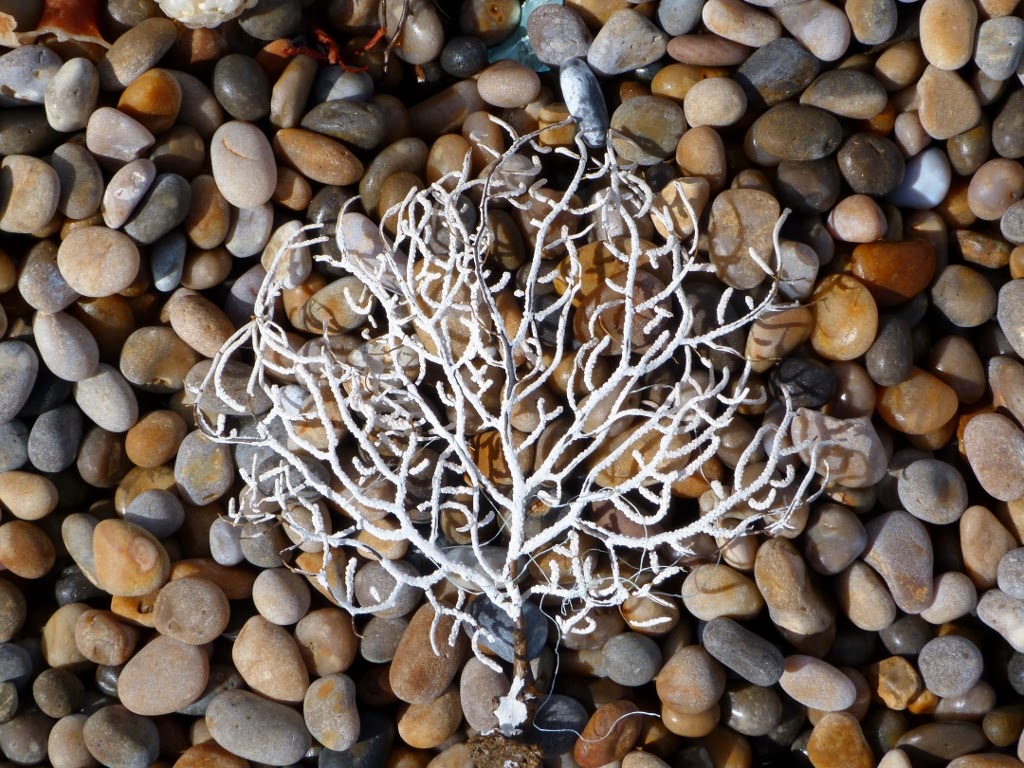 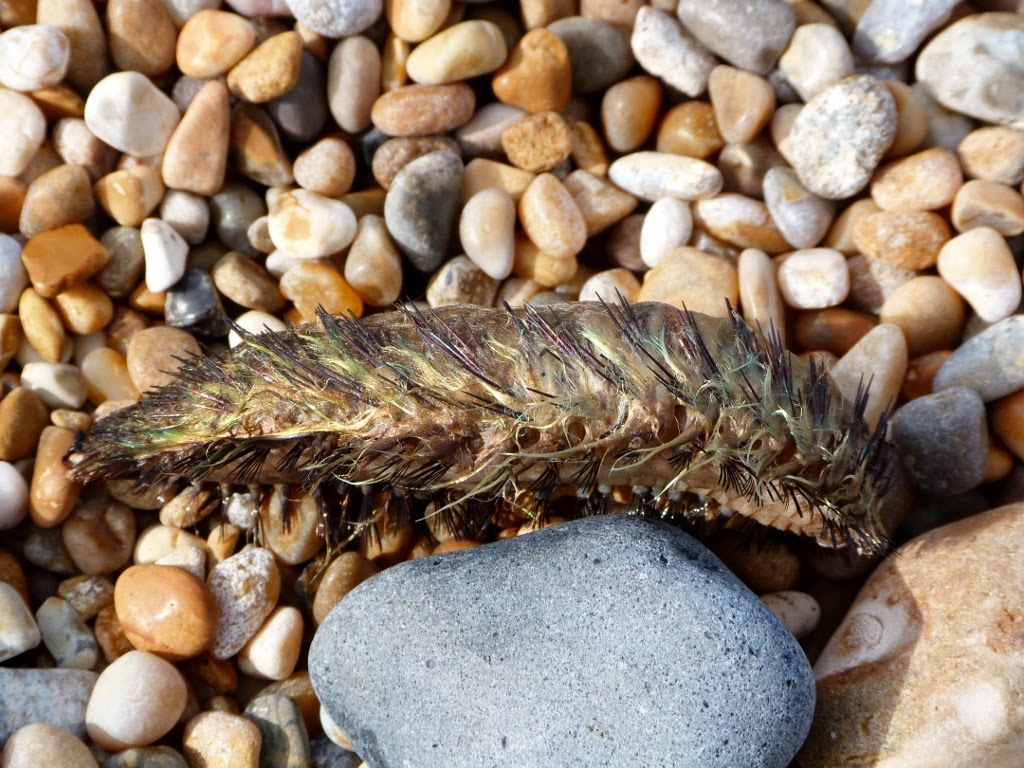 along with corpses of
SEA MOUSE
a relatively scarce creature of the deep, therefore rarely seen except
when falling victim to violent storms so I am told. 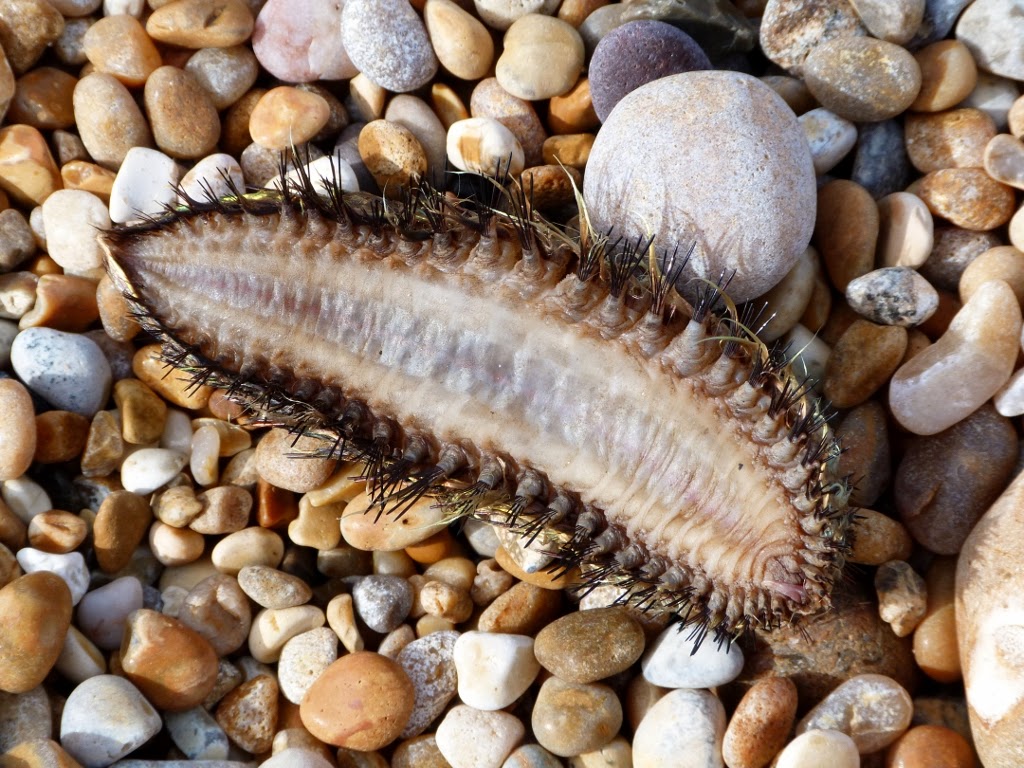 which derives from the Greek Goddess of Love, Aphrodite and the similarity of the underside of the animal, supposedly looking like the genitalia of a human female. Once again I will have to rely on what has been told, having no practical knowledge of such things. Finally, and of most interest, this 10" diameter wheel which, shame on me as a life-long Seaman, I did not immediately recognise. It is a 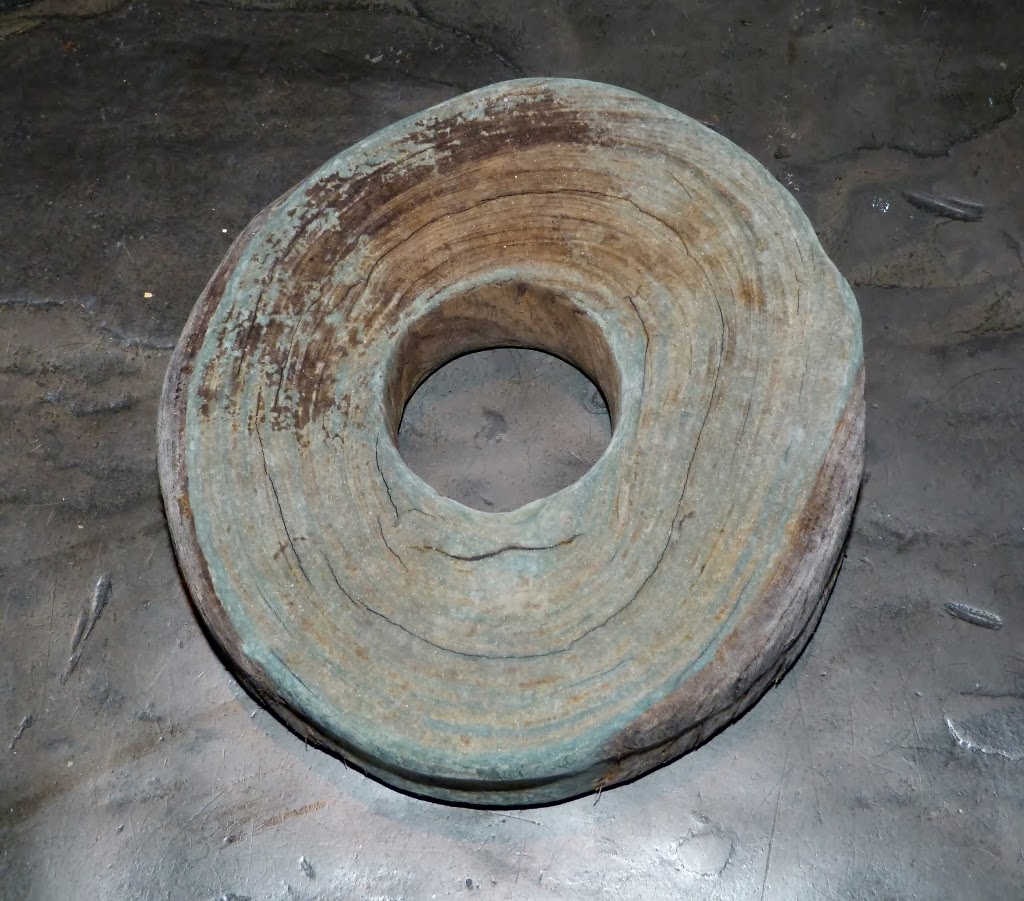 in oppose to a Bulls-eye which has 3 holes, through which ropes on a sailing ship (and other) are pulled to give a fair-lead. It is made of LIGNUM VITAE which usually shows this green patina and is the most dense trade wood in the world, which readily sinks in water. Although I have been familiar with this material and its use throughout my 48 years at sea, the attached Link proved more than interesting, and feel sure the Dead-eye will make for an everlasting conversation piece at many a dinner party.
Thanks to those concerned.

With the almost unheard of appearance of 2 Advertisements in this Post alone, an opportunity will be taken to explain the situation. A 'personnal pledge' was made at the onset that this Blog would carry no unacceptable foul language, profanities, racism, religious jibes etc, and to a point no advertising. The reasoning? I want, above all, for my Grand Children to be able to log on and to see no more than their loving parents would want them to. This also applies to Advertising except in certain circumstances. Last month alone and offer was made of $1,500 to carry a year long promotion for a gambling site, followed by a second of $1,000, for the same period, to explain to punters the theory and ethic behind the gaming. The exception is made when a 'QUALITY' product or service is found (such as that shown above) which we feel would be beneficial to our readers. 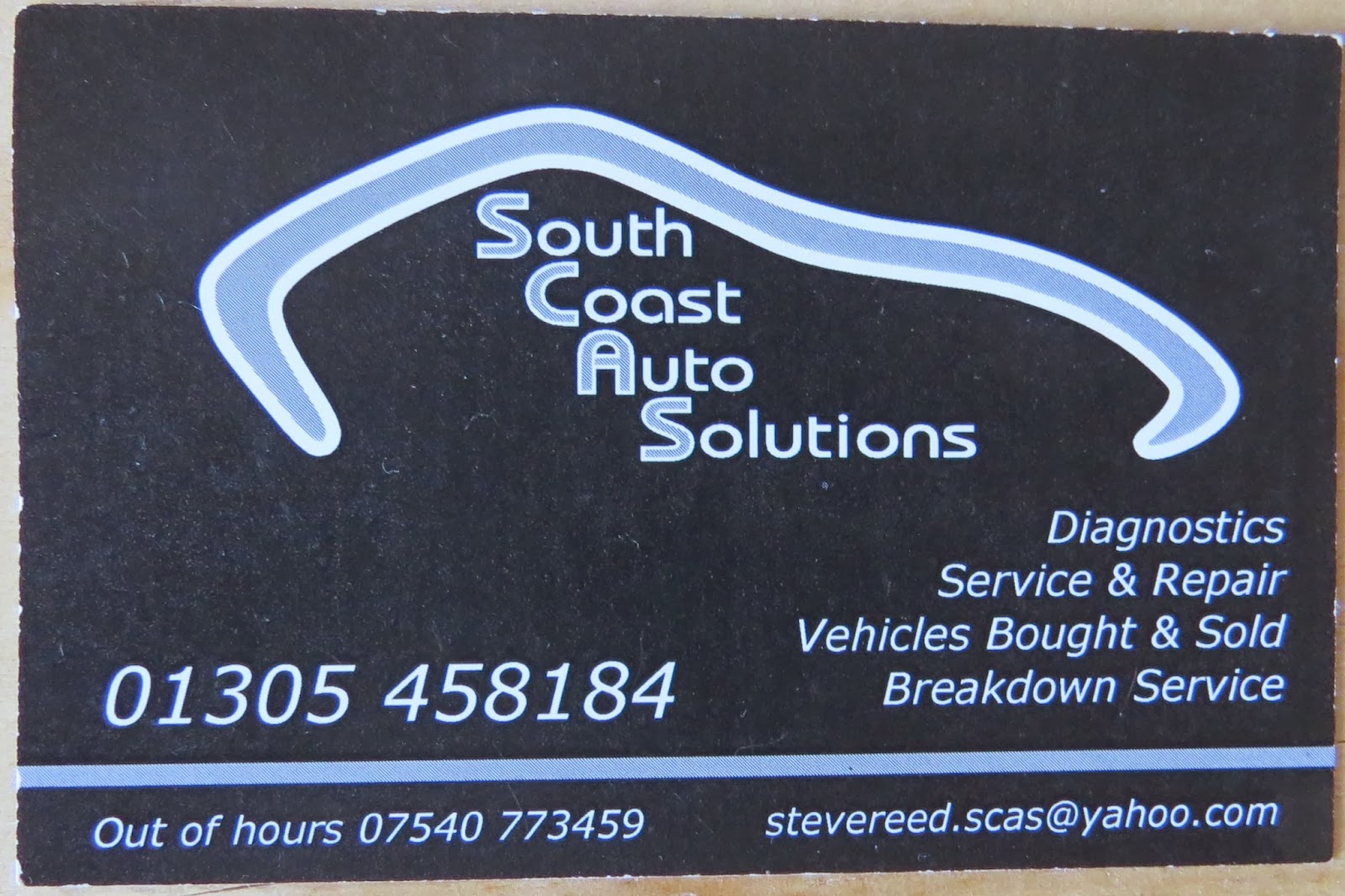 were found to fit perfectly into that bracket last week, when I was 'up a creek without a paddle'. Seeking the advise of Secret about the noise coming from my car he simply said, "I wouldn't even move it before renewing the discs and pads on the rear brakes". Without a clue of such things he estimated what might be the cost and found SCAS to be the nearest garage that could do the job 'on the spot'. There was an added snag as I had a lunch date which coincided perfectly with the repair, but was overcome by SCAS in the blink of an eye. Not only did they drive me to my date and made provision for a return, at NO COST, the final bill was £2.00 less than that estimated. Some days later, it was decided to have the tyres checked as on one there were symptoms of a slow puncture. This was found to be the case and was repaired in quick time, followed by a second (yeah, that's why they call me Lucky) small hole in another tyre. Although a few quid was spent at the first visit I was expecting a 'bill' but instead was invited to stick a 'tenner' (£10) in the 'tips jar' and get on my way. If you know somewhere that can beat this then best get there after you have let me know!
MY THANKS GO TO STEVE (Owner), LUCY, JAMES and OLLIE.