While our usual ramblings are published on average 3 days apart, for some time now we have been considering 'INFILLING' the gaps with less long-winded 'Daily Reports'. Along with our Much Valued Readership we realise that the 2,000 or so acres which comprise Parley Court Farm and Merritown Heath are neither a 'headlining' Migration Watch Point or for that matter the heart of the Amazonian Rain Forest, but rarely a day goes by without something of interest. For now at least these reports will be mainly narrative with, when applicable, just a sprinkling of images of the better finding of the day. We also know that many among you log-on to our humble site on a daily basis, often to find nothing new so, this idea should also alleviate that! So here goes.....
With the days now getting noticeably shorter there is little value in transporting the Moth Traps to the monitoring point at Slight Return II until about 06:00. With the first of these in hand, a Green Sandpiper was heard transiting the southern section of the farm while one Little Owl was on full view on a favoured perch as the other was continuously 'calling' deep in the cover of an Ash tree.
Always a welcome sight a 'migrant' 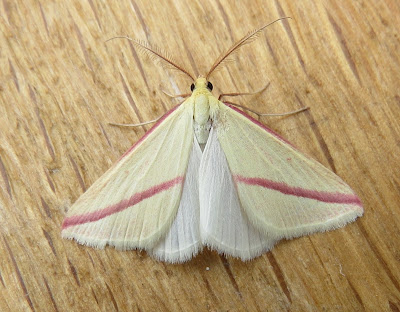 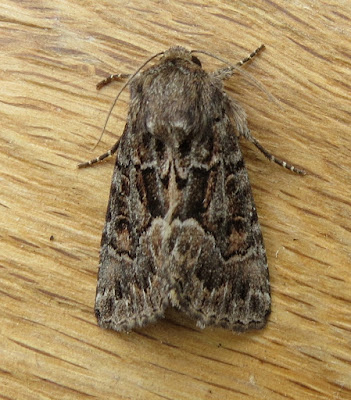 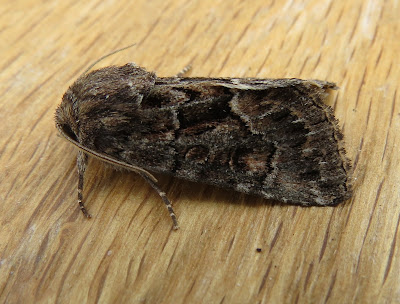 STRAW UNDERWING
if only we could have coxed it to show its most startling feature.

Moth Count + 269 Macros x 64 Species
The sight that met the eye just north of Eco may best be described as 'many hundreds' of Swallows rather than 'thousands' but none the less a large number of birds slowly making their way towards the coast. There was a, considered, second Green Sandpiper at the Gravel Pit but nothing else, while at the Merritown Gate numbers were far fewer but again Swallows dominated. All else was left to the 'regulars', just c5 Dartford Warbler along with a couple of juvenile Stonechat and a single Slow Worm under one of the 35 sheets of metal or roofing felt now scattered far and wide across the area. However, most interest was of a human nature as there was a massive increase in activity beyond the barbed wire fence separating us from Bournemouth International Airport. Where in recent days there has been little or no activity at all, today both Contractors and Plant were present Mob-Handed!
The short video clip it seems is too large to be uploaded, 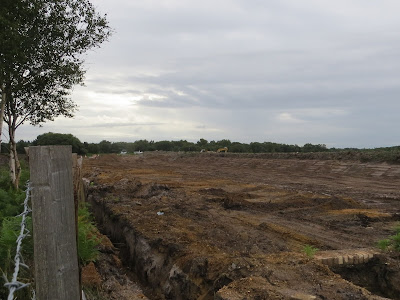 so it is hoped the 'still' will give some idea of the shape of things to come.
A couple of the workers were asked about the full plan, but it would seem the depression now forming will be what they described as Leveling Ponds, whatever they may be. 'Ponds' have to mean water, and water Wildlife, so bring it on! Otherwise, the dull weather with occasional showers of rain continued throughout ,which saw a raucous male Kestrel feeding an even more vocal juvenile in the trees behind Harbins farm House and a Great Spotted Woodpecker feeding on Hugh beloved Tennis Court.
MORE MANANA!
Posted by Bagsy at 14:05