Home By The Sea - Genesis

It won't be long now before the Blog is closed down and they ship me off to the
Home By The Sea - Link
Judging by the number of puddle-lets that reappeared overnight the rain must have been either heavy or persistent, whichever at 04:00 it was noted that both the stable and garden Moth Traps were extinguished - (misnomer)! Had the rain blown the fuse on the garden ring-main, no everything else was working, so it was more likely the U/V lamps had blown (misnomer #2). It's not that I watch a lot of TV but did rather enjoy, over a couple of goblets of decent Red anaesthetic, witnessing Gerry Standing (New Tricks) being blown to Kingdom Come and then 'predictably' being reincarnated stepping into a equally Red Ford Mustang before driving into oblivion to the strains of Born To Be Wild - Steppenwolf. With absolutely no reason to get up at that hour I returned to the hammock for a Guard and Steerage, and it wasn't until enjoying a first cup of coffee a little later that it was realised I'd forgotten to turned the flippin' things on before retiring!
'A one-way ticket to The Home By The Sea please'
Apart from being reduced to just 2 traps, from where the best on offer were 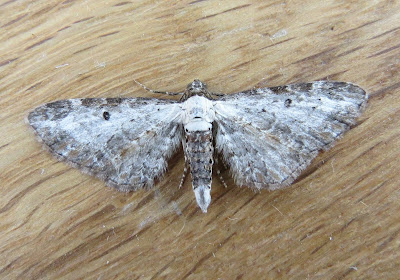 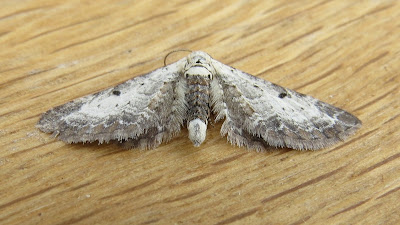 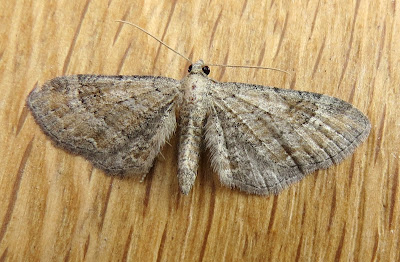 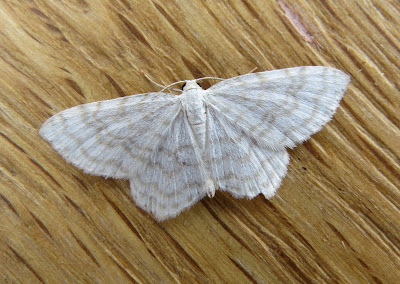 SMALL WHITE WAVE
process to the relentless song of a Willow Warbler
plus a fly-past of c6 Siskin.
150 Macros of 40 Species
The Day Report is also rather deplete of interest except for the return of
Raven, Grey Wagtail and a second Green Sandpiper and at the 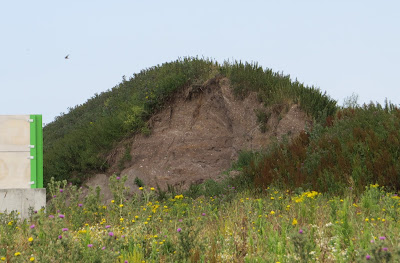 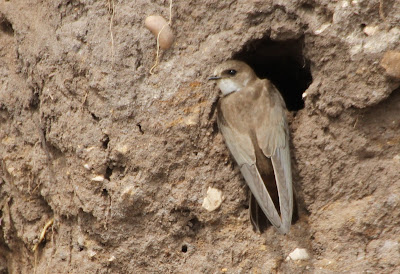 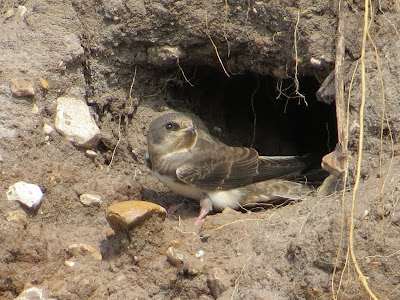 with parent birds feeding young.
but then something of an eye-opener after yesterday's aborted attempt
to bring you footage of the progress at Bournemouth International Airport.
My arrival there this morning coincided with a Management Site Inspection, where I was able to 'catch the ear' of one of the Civil (in more ways than one it must be said) Engineers. He started by telling me that back in the 70's the ethic was to consign all 'services', wherever possible to underground. More modern thinking has now seen such practise reversed with the effort here centring on getting all water sources above ground. He was also able to confirm that the area covered by this shortened
Video Clip
(which by my estimate covers an area of some
¼ of a mile x 50 yards)
will indeed become a 'water plain area' of sorts with associate attractions for Wildlife.
Harking back to Gerry and his red Mustang,
such images conjure up memories of some great times in 1998.
During that year both my younger daughter Lisa and myself were at a bit of a low ebb (nothing serious, just the Doldrums) as I was newly divorced and she recently returned from a full year travelling through South East Asia and the Antipodes. Sat on my new sofa in my new house (Slight Return I) we decided there and then that we would return to our World Wanderings by transiting the United States of America from Coast to Coast. A sketchy plan was drawn up, starting in New York, taking in some of south east Canada, including the Falls then heading for Frisco, via Mexico, using the Central (east/west) Highways.
We had spent a full and enjoyable day in Nashville, Tennessee and early next morning we were stood in line waiting to board the Greyhound for Memphis. Behind us in the queue stood 16 years old Danial with brother Robert (14), their natural mother and step father who they had been visiting for a few days. Only the 2 boys joined us on the coach, as returning to their fathers house, where the conversation was stimulating to say the least. Arriving at the Greyhound Station on Airways Boulevard, Downtown Memphis, Lisa and I turn to say our good-byes but were stopped short by Dan and Bob. "No, you have to stay with us as Mom has given us a 'fistful of dollars' to show you around our town"! The taxi dropped us outside of a large, archetypal American house where, once inside, cold drinks and sandwiches were served before repairing to the basement to flash up their guitar, amplifier and drums, then singing along to some R and R classics. Dan then asked the 3 of us to wait for him 'out front' while he disappeared into the backyard emerging 5 minutes later driving 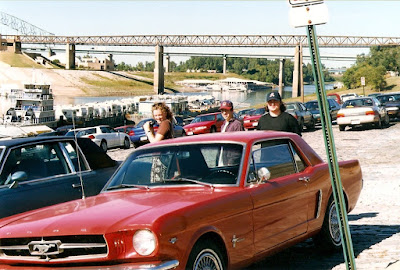 'Gerry's Red Mussy'.
This image was taken prior to crossing the Mississippi Bridge into Arkansas.
Help me, information, get in touch with my MarieShe's the only one who'd phone me here from Memphis TennesseeHer home is on the south side, high up on a ridgeJust a half a mile from the 'Mississippi Bridge'. 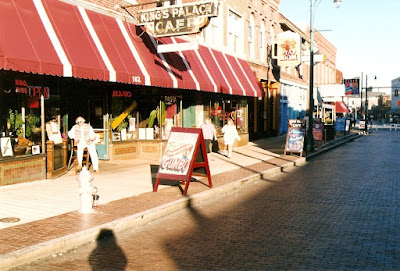 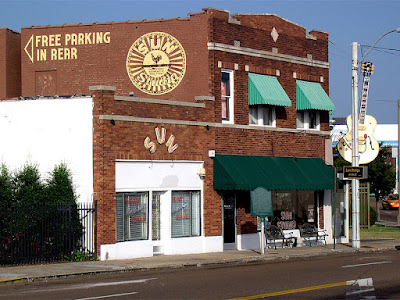 SUN STUDIO
where we listened to original recordings by
The Million Dollar Quartet
Jerry Lee Lewis, Johnny Cash, Carl Perkins and The King
before heading for Elvis's favoured cafe next door. 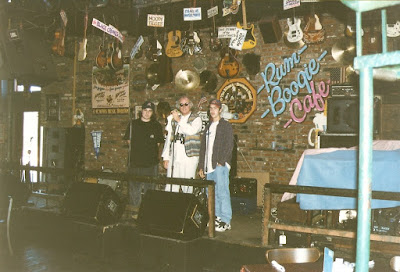 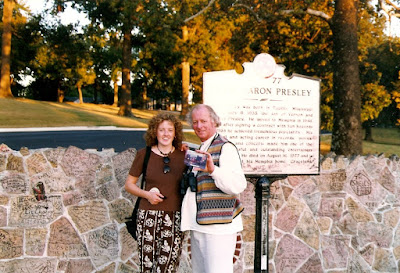 GRACELANDS
and the
Elvis Airport
As darkness came upon us we were taken to
THE PEABODY HOTEL
where each evening the resident Mallard Ducks find their own way to
the elevator and are taken to their
Palace on the Roof. 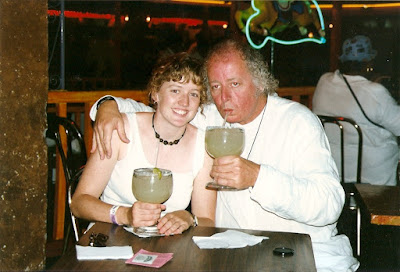 Having said out Thank Yous and Goodbyes there was time for a
MARGARITA for TWO
before boarding the next Greyhound for the next destination
New Orleans
but that's another story!
Rock 'n' Roll Trivia:- Steppenwolf changed their name from The Sparrows to the title of the Hermann Hesse novel of the same name. Born to be Wild is considered by many to be the very first 'Heavy Metal' song as the lyric of the second verse coins the term for the first time in Rock 'n' Roll, which of course became 'the genre'.
I like smoke and lightning
Heavy Metal thunder
Racin' with the wind
And the feelin' that I'm under
Yeah Darlin' go make it happen
Take the World in a love embrace
Fire all your guns at once
And explode into space.
while a Guard and Steerage, in Royal Navy parlance, is an extra 30 minutes 'lie in' the hammock for those back in 'days of yore' who were required for such duties (Guarding and/or Steering the ship) if continuing after 23:59. It is not known if this practise still exists, as since such newfangled ideas such as Human Rights and Sexual Equality have wangled their way in RN life it is likely Jolly Jack or Jolly Jackie can get their head down whenever they want?
Posted by Bagsy at 15:28