Angel of the Morning - Juice Newton

A VERY HAPPY NEW YEAR to ALL OUR VALUED READERS
FROM the 'FULL TEAM' HERE at the
BAGSY BLOG!
Another very special day warrants at least
another small slice of the
Bagsy Memoir
What follows was pre-recorded, like HM's speech, so today we intend to do a
'Day Twitch confined to the Recording Area'
the result of which will be forthcoming at a later date!
The Two Birds That Very Nearly Killed Me.
Cast your mind back, s’il vous plaît, to our Christmas Day Post and my departure from the Galapagos in early 2003, when there seemed to be only 2 things on my mind. Uniquely, the first was the thought of what had been missed on the Islands, rather than what had been seen, while secondly when would a return trip be made to see more. With the hackle already raised, at the time a wager of 1000/1 would have been accepted that it would be in no more than 2 years, but in the event it was nearer 7! You'll be pleased you were told all of that particularly as once again this little dit (a sailor's story) has nothing to do with Galapagos except, like it's forerunner, that had been my last port of call in late 2009. To say that second visit to the Islands had been a GREAT success would be an equally large understatement, but now the intent was to do more justice on the mainland of Ecuador. Prior to that, 3 weeks had been spent in both Colombia and Venezuela but this time it was a solo trek.
A brilliant Plan of Attack had been drawn up for me by my Ecuadorian friend, the afore mentioned Byron Palacios, who above all else recommended that Nanegalito was not to be missed and where I arrived on New Years Eve, now there's a coincidence eh? A run down garret was found for less than a 'fiver' a night, where all the water except for the potable had to be brought by the owner up 2 flights of stairs by bucket then decanted into a horse trough in the middle of the room. There was no way anything other than water from a sealed bottle was going to be consumed, but even then that was no guarantee against getting diphtheria. My first thrust was to seek out the World Renowned 'Angel Paz', which took almost a full micro-second, as just about everyone in the village was related to him including the lady in the bakery (another coincidence) who said she would get him to visit. This he did a couple of hours later, along with his son, and the scene was set for the following 2 days. 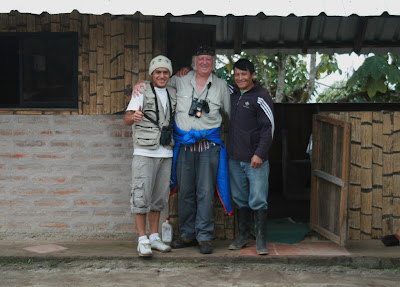 VINICIO PAZ (son), MOI and ANGEL PAZ
The transport arrived well before daybreak and took me to what might be described as Angel's Place, which was not his permanent home but a substantial Hacienda nonetheless, with an outside cooking area, toilet block and viewing platforms, oh yes nearly forgot along with thousands of acres of prime, mature rain forest! The story goes that this was left to him on his father's death, with an immediate reaction to chop it down and make himself a fortune but that was before his distant neighbour contacted him. With a similar tract of adjoining woodland, he suggested that they preserve it, open it to controlled visitors while making a living and saving the Planet at the same time. A remarkable man/family indeed who, over those 2 days opened up a whole new world of 'birding' to me, only a very small part of which were at the feeding stations:- 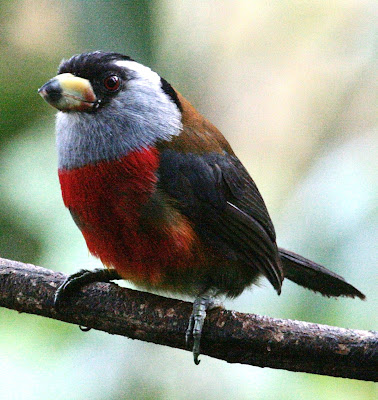 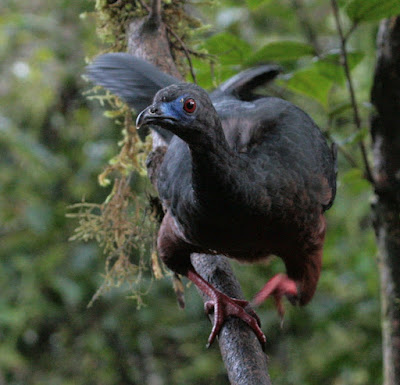 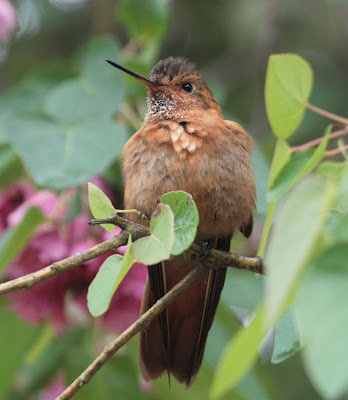 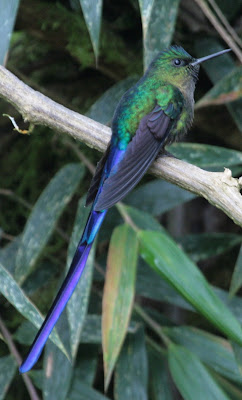 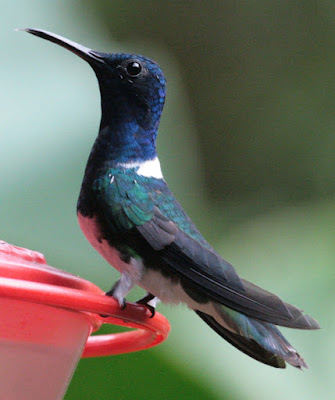 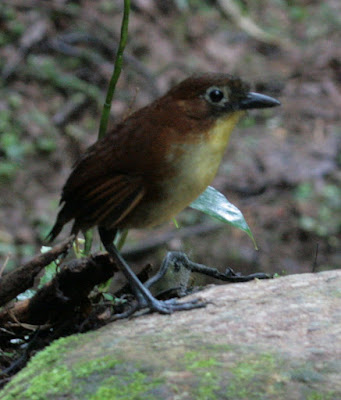 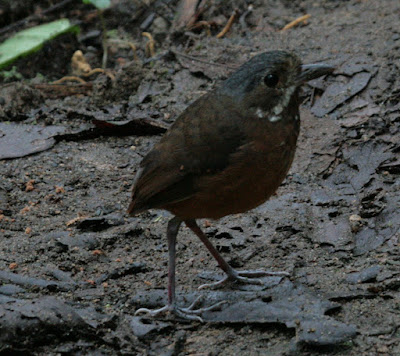 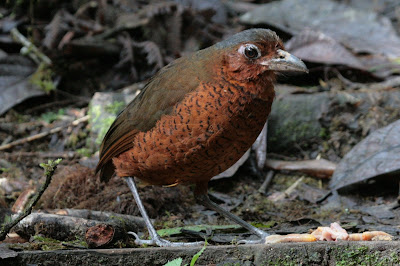 GIANT ANTPITTA
which Signor Paz Senior coaxed out of the undergrowth with a series of 'calls'.
but we digressed, I came nowhere near dying there!
What Byron hadn't mentioned in his carefully laid plan was the 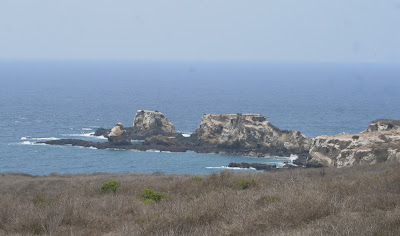 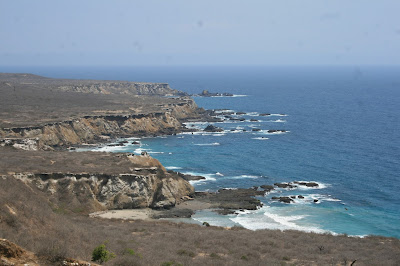 A small Island on the north west coast of the country it is part of the
Parque Nacional Machalilla
and can be reach by boat from the city of Puerto López which is 25 miles away,
and which was planned as the next stop.
It is also referred to colloquially as the
Poor Man's Galapagos. 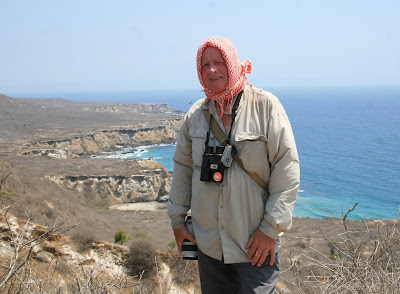 All togged up and liberally spread with sun-block we arrived on the Island.
Having heard that there was a better than even chance of seeing 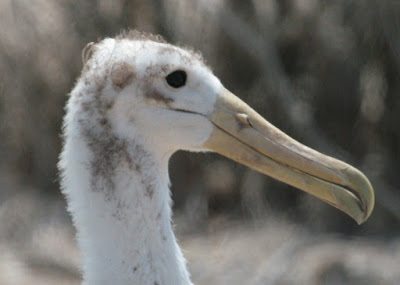 WAVED ALBATROSS
there it was a 'no-brainer' and the passage was booked.
Talking through the prospects of the day, prior to sailing, with my new found guide
a tall, lean, fit muscular, good looking, knowledgeable Ecuadorian Young Man,
an exact 'mirror image' of myself, oh except for the Ecuadorian, he did mention 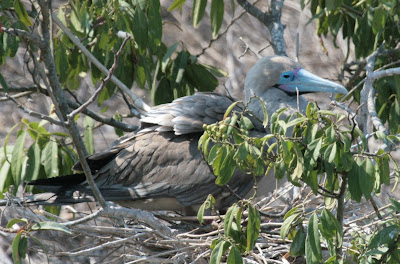 RED-FOOTED BOOBY
but there's the rub!

Along with 4 other tourists on that scorched, arid, undulating place, with little more than goat-track-like paths, where the temperature was already +100°F and no shade whatsoever, our Guide posed the question "which of the 2 specialities bird species would we most like to see". The others were obviously content to just see what came before them, so my bid was stuck in to "go for both". This brought a snigger from Chiefy when saying it would be unlikely that even the fittest among us would not complete that on a single trip. Now being at least the 6th fittest person in our group, and the only FFB to boot, that wasn't going to get in my way, so having secured the Albatross, albeit a single juvenile, the subject of the Booby was brought up again. 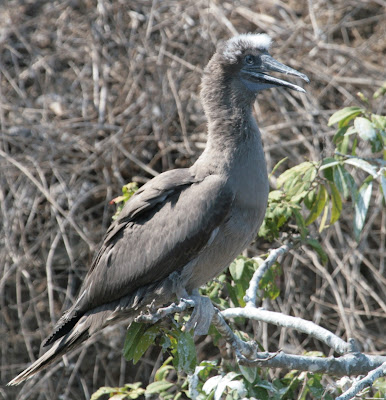 The bottom line was if we took enough water along with an umbrella
and I could keep up he was prepared to give it a go with me alone,
the others were far too sensible even to contemplate the venture. 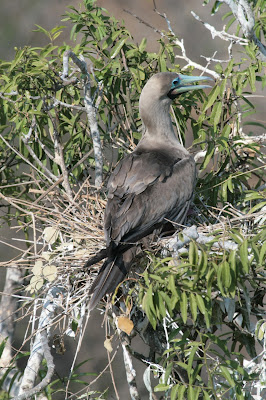 I have no idea the distance covered but it was far short of
a marathon, maybe a mile to the small breeding colony and
the same back to the boat, but what is known is that
we did make it, these images were taken but that day
was undoubtedly the closest I've ever been to 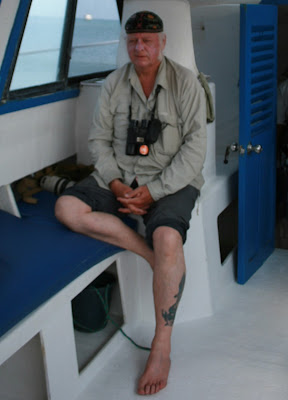 'falling off my perch'.
This image doesn't portray the reality!