Sunshine of Your Love - Cream

Stormy Weather replaced by Sunshine of Your Love.
We can only blame the weather in as much as yesterday we were able to get out and be rewarded with decent views for a change. Although it was a little chillier, gone was the rain (albeit temporarily) with no wind and apart from the glare of the Sun (no, you can't please everyone) it was perfect for Birding and Walking alike. The first bird of interest and a Year Tick to boot, betrayed its presence by a short series of rasping croaks which had me scampering from Slight II in the half light to find a 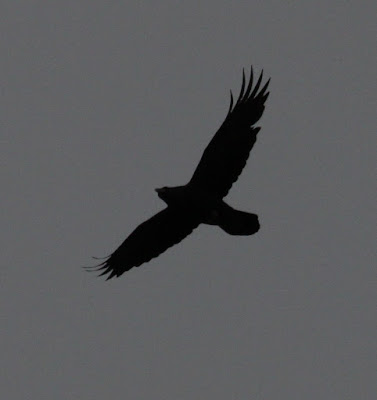 RAVEN
flying overhead.
With neither Coot or Moorhen detectable at the Irrigation Pond
it was quickly on to the Gravel Pit where a flash of blue caught my eye
but at great distance. A scan with the bins found a 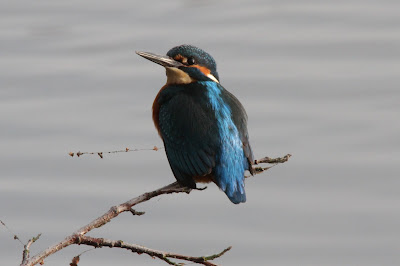 KINGFISHER
(only the 'second' ever recorded at this site)
perched at the far end of the watercourse, with the clip above giving
some idea of just how far away it was!
This was followed by a lean half hour as we made our way to the
Sewerage Works where all of the hedges and that lovely big muddy puddle
were also devoid of bird life. Because of the hedges and other fencing, this
is a difficult area to view but with first a 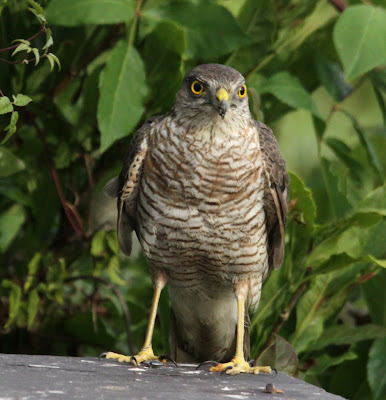 SPARROWHAWK
and then the most vocal 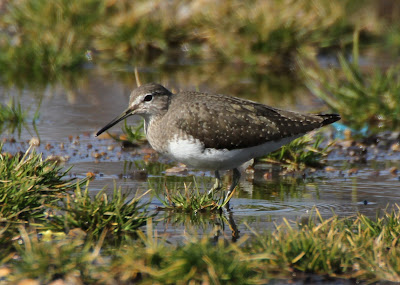 GREEN SANDPIPER
on Earth flying in things were looking up.
Down at the 'flood plain' which now masks the
Moors River
there was a bit more in the way of Wildfowl action although
nothing different and everything also at great distance.
TEAL
numbers of which are now in excess of 3-figures with 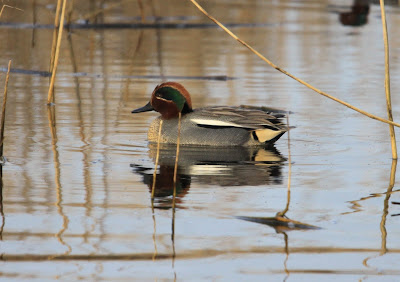 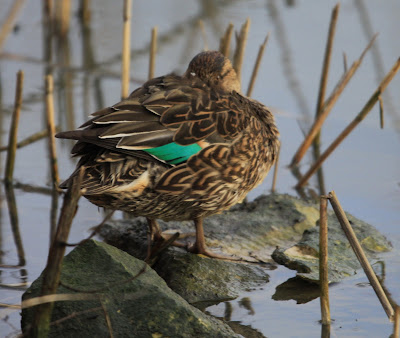 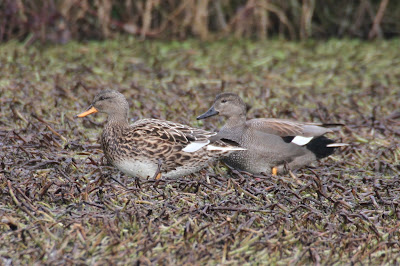 GADWALL
are creeping towards double figure with 8 counted there today,
while 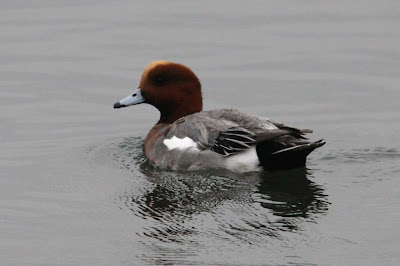 WIGEON
is still represented by the lone male.
Male WIGEON
through the trees
and in company with female TEAL.
The most unusual, in fact unique, sight along that beat was of c3 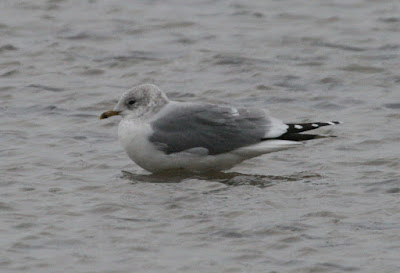 COMMON GULL
which are 'rare' in our Recording Area anyway but to our knowledge
have never been seen before at this particular site, nor in such numbers.
There were also c2 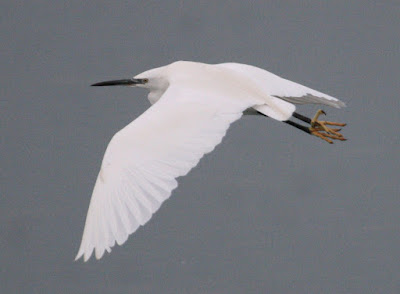 LITTLE EGRET
and the same number of 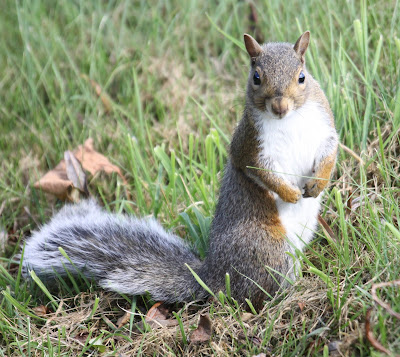 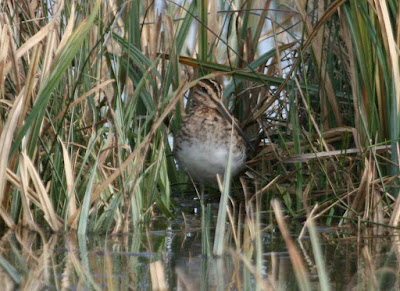 Such was the small green bucket, complete with handle found on the marsh once the Snipe had disappeared from view, and was laid aside for later collection. Following that, it was only ideal curiosity that had me investigating one of the Pheasant Feeding Bins, which had also lost its lid, but still ⅓ filled with Wheat. Thrusting my hand into the bin, to test just how wet the grain was, it was removed 10 times quicker as this small Rodent appeared. Taking a good look all round, it was impossible to fathom just how this hapless and satiated creature had managed to get there in the first place, but it certainly couldn't get out! 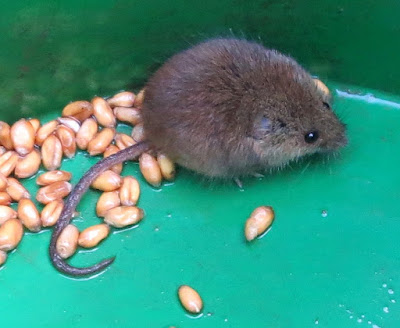 WOOD MOUSE
(thanks to John Gifford) 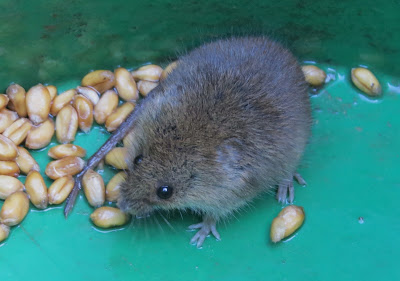 There you are, the story is no more than a minute old and already there is a use for the 'little green bucket'! Decanting the Mouse from the bin to the bucket, which made a fine base for both images and footage, after which it was given a new found freedom.

Despite the slight trauma note, this tiny creature was still feeding.
Cutting along to what has been a deafeningly quiet Merritown Heath
so far this year, we first heard and then saw our first 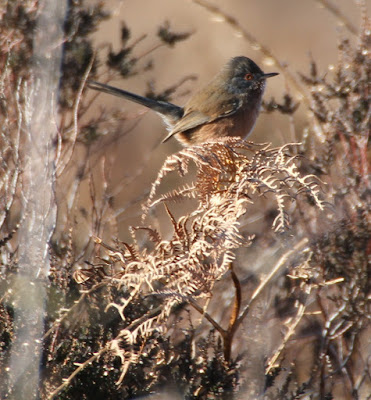 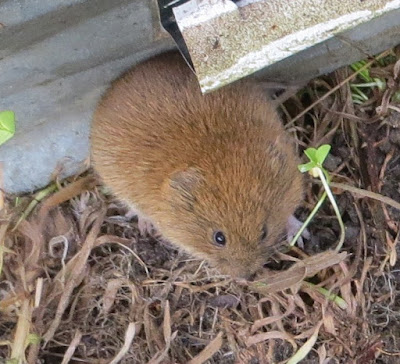 FIELD VOLE
still in residence.
Further on and within the Main Solar Panel Compound 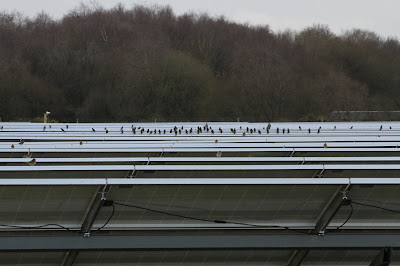 the place was alive with birds, with these images doing no justice
to actual numbers. 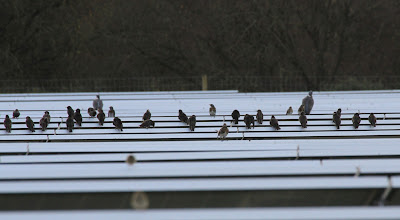 On these panels alone were Wood Pigeon, the largest flock of
Starling seen here so far this year, Meadow Pipit, Pied Wagtail and Fieldfare. 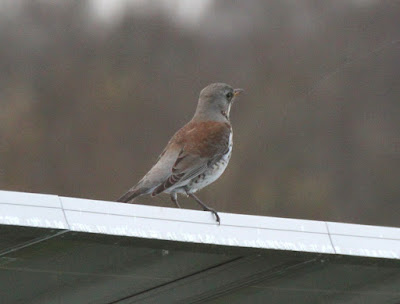 The latter were somewhat more confiding than usual, 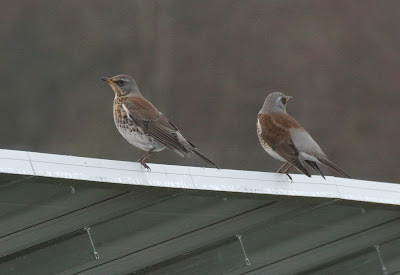 and from the cover of the Strange Rover 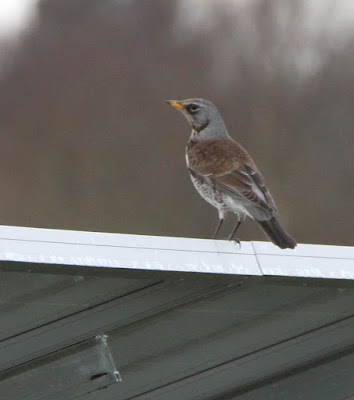 We were able to secure these photographs.
Also there was a single 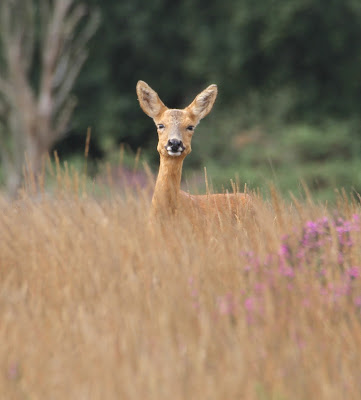 ROE DEER
and our second 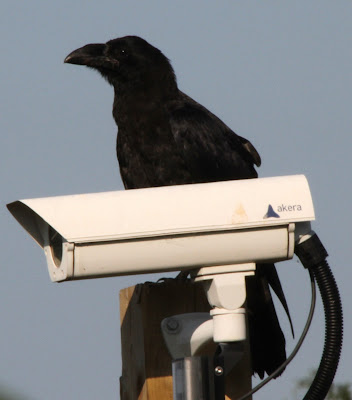 RAVEN
for the morning. We say morning as at precisely noon, that is when
the heavens decided to open again and 'rain on our parade'.
However, there was one final Mammal noted as a 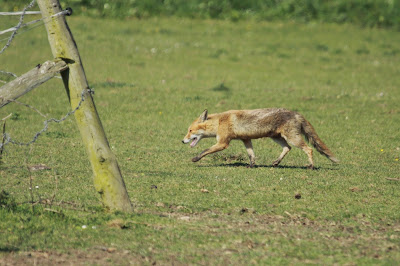 FOX
decided to cross our track on the way back to
Slight Return II and the Memoirs.
Posted by Bagsy at 08:58