Having 'very much' enjoyed the company of
Annie, Lorraine, Tess, Paul, Dave and Paul (my Winger)
in the last couple of weeks, an unexpected E-mail
heralds the arrival of another Mate who is not known
that well to me but, after reading the following it will be
realised that should he need a suite at the
**** Royal Bath Hotel he would most certainly get one!
As regular and long-standing readers may remember on the 04/12/2013 we set-sail from Portsmouth in England on a 5 month long journey to fulfil a number of outstanding dreams. Despite a 48 years career on The Briny two things had eluded me, (1) crossing the Atlantic Ocean by ship, from coast to coast, and (2) transiting the Panama Canal. If there was a £ levy for every time I had crossed that seaway by air there would be enough to get a round of drinks in, while in the past, in company with Large Rotund William, we had together spent many hours discovering Ferdinand Marie Vicomte de Lesseps 'masterpiece of engineering'! 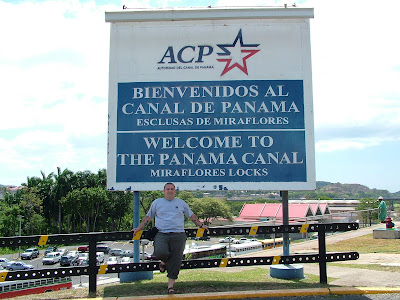 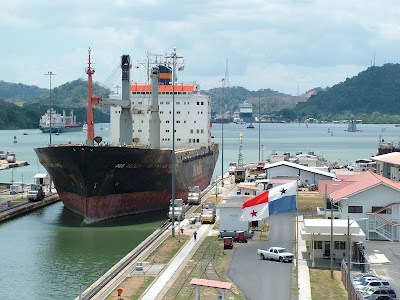 PANAMA CANAL
Having already travelled extensively in the Americas there was
also a 'third' ambition that might be fulfilled but would necessitate
a whole catalogue of logistics, strength and resolve.
To set foot on every bona fide Country of the America's that had not yet been visited. The mighty SS Voyager would take me to a good number of these but there were still 15 to be undertaken solo including:-
Puerto Rico, both UK and US Virgin Islands, Haiti and Dominican Republic to name but a few, but also included would have to be the 3 small countries tucked in the north-eastern corner of South America.
As far as Bird-life is concerned on such journeys, there has never been a desire to draw up a Wants List, although thumbing through the various Field Guides night after night (on watch) there are certainly those which stick in the minds-eye. On this trip there could have been 'hundreds', but there were but 3 Mystical/Magical call them what you will:- 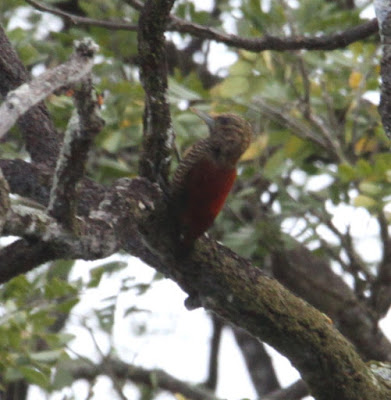 BLOOD-COLORED WOODPECKER
similar to our own Lesser Spotted Woodpecker it is hardly any bigger
than a House Sparrow and just as difficult to find and photograph.
However, this was found in the Parque Botanical in the
capital Georgetown during a 5 day stay in Guyana. 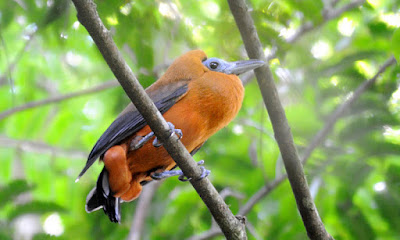 CAPUCHINBIRD
(locally known as Cowbird because they Moo)
was to be a whole different ballgame and without a 'guide' virtually impossible.
Enter Otte Ottmar who was hired for a week and took me to, among many
other places in Suriname, the remote Tonka Island. There it was a delight to locate my own
COWBIRD!
Having thus far nearly been killed by either Starsky or Hutch as driving recklessly from Paramaribo, the capital, to the ferry terminal at the border when hitting a full size Sow in the middle of the road and killing her dead. Having decided, under firm assurances from the locals, to ignore the Foreign and Commonwealth Office advise to get a visa before attempting to board the ferry bound for French Guiana - WRONG! and then on the return ride, definitely Starsky this time, being arrested at gun-point as the driver was not only speeding but also had, illegally tinted windows. At the Police Station the Constable lowered his rifle for the first time and subject to a search the Plain Clothed Detective thought he had broken a Drugs Cartel when finding my 5 months supply of prescribed medication. It only took 90 minutes for me to convince him otherwise which in turn saw me miss a second ferry, while the driver was ordered to strip the darkening veneer from his car windows. Finally making it safely to Cayenne the capital of French Guiana, on day one there was difficulty accessing the sea-shore due to dense Mangrove Forest. Having been shown the Secret Path bright and early next morning stood at the root of the tiny stone pier which formed the equally tiny harbour. The first good birds to show were a flock of 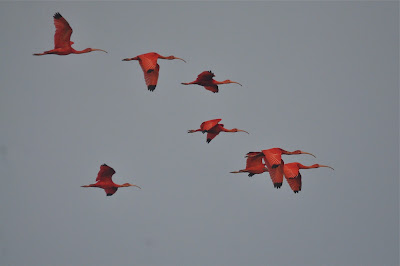 SCARLET IBIS
undoubtedly making their way to the marshy feeding grounds.
From the pier half a dozen 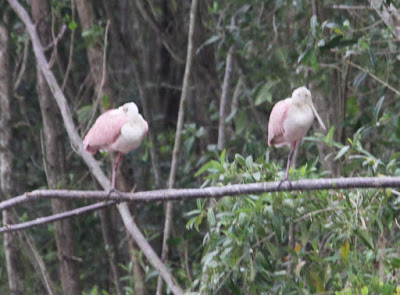 ROSEATE SPOONBILL
could be seen distantly perched in the mangroves. Taking a good long
look before raising the camera, as I did so a gentle female voice enquired
"are you a photographer"?
Without even turning to see who it was, politely said just a few minutes should
be enough to secure the photos then we could talk.
I turned to find a young and beautiful Thai Lady 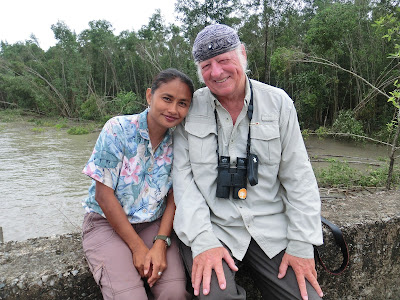 ROONG
stood next to me and very quickly we were in deep conversation about
birds, travel, photography and all else.
After a few minutes she asked if I would like to meet her husband, and soon introduced me to 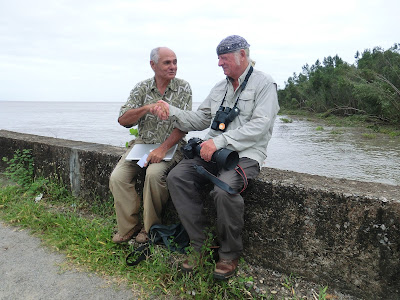 Jean-Fracois Ozoux
Telling them of the 3 target birds mentioned above it was also mentioned that the idea of the latter had now been abandoned even though the location was known, as getting there would be neigh impossible. Casual as asking if I'd like a sweet they simply said, "we can take you if you would like" - LIKE! cor blimey!! 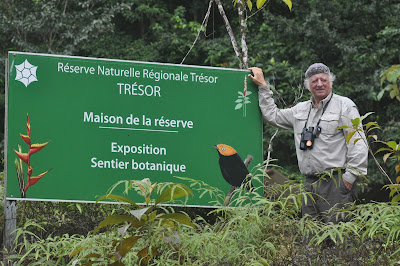 and to show me the 2 specialities there 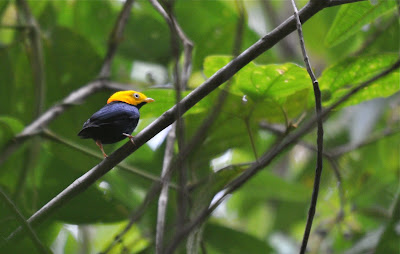 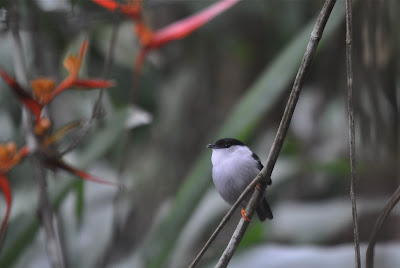 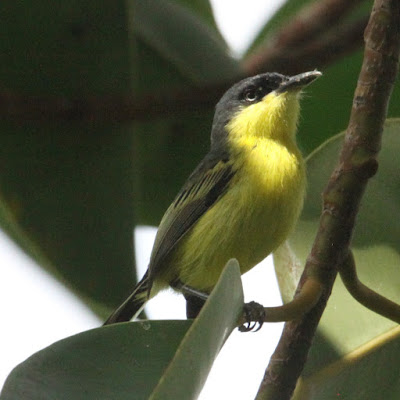 COMMON TODY FLYCATCHER
for good measure.
A little further along the road we made another stop but this
time for quite a different reason. 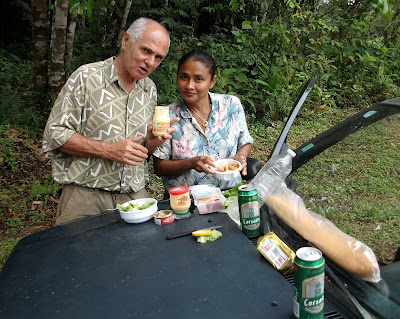 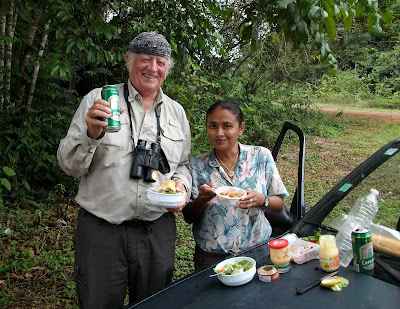 out came the picnic with a huge assortment of food and drink
which included both beer and wine. 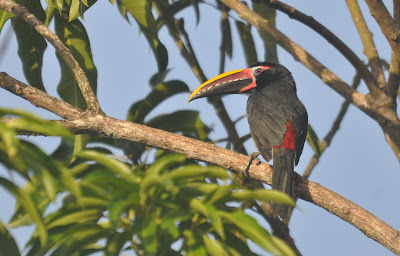 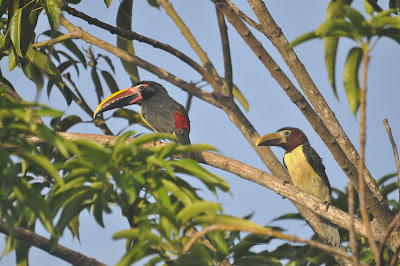 There were also a few 'exotics' while 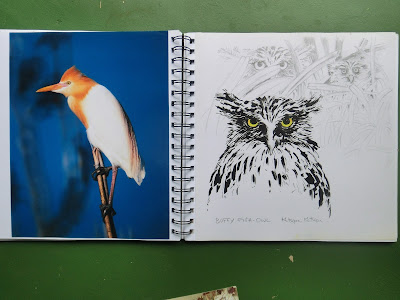 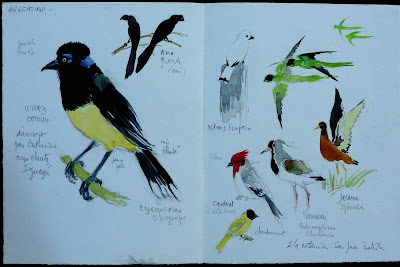 introduced me to his 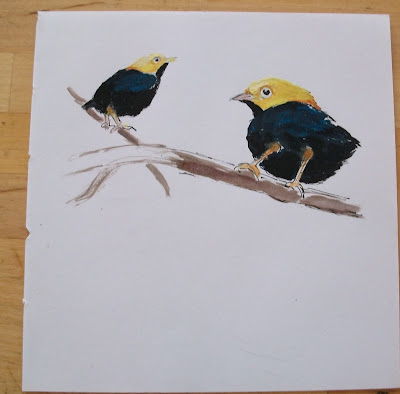 FIELD SKETCH BOOKS
mightily impressive!
Other short stops along the way brought us 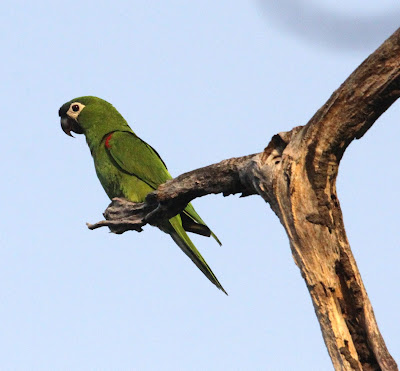 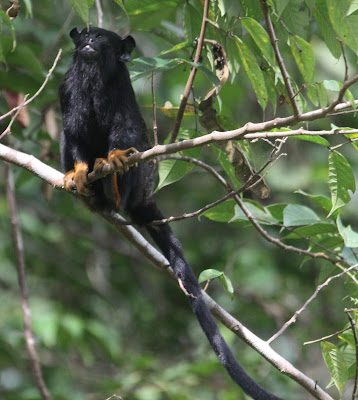 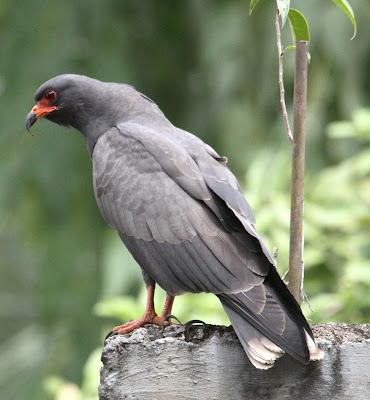 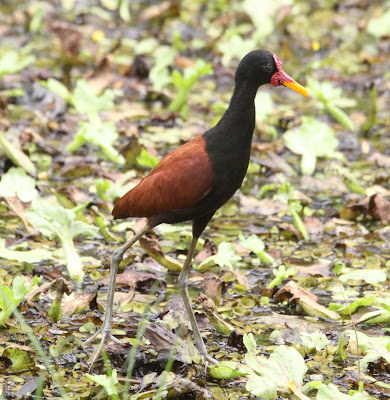 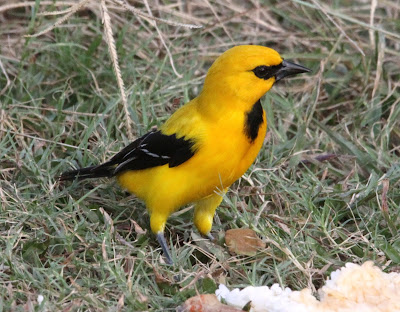 YELLOW ORIOLE
among many, many others.
Eventually, we came to a lay-by on the track and a sign which simply said
KAW
there was not a building to be seen, or for that matter any traffic so it was
though unlikely this place would have been found if alone, even if transport were available!
It was a long walk through dense jungle with nothing underfoot other than an
extremely steep, wet, boulder strewn path (with that term being used lightly).
Some time later, gnat bitten and infested by Leeches there was a wooden pole
barring out progress with a sign reading
NO ONE BEYOND THIS POINT!
We had arrived at the home of the 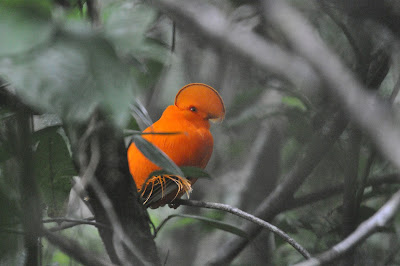 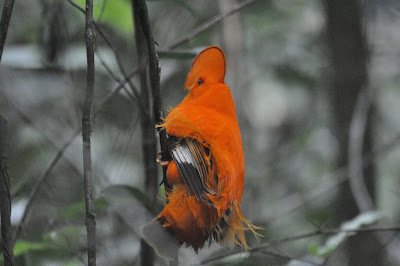 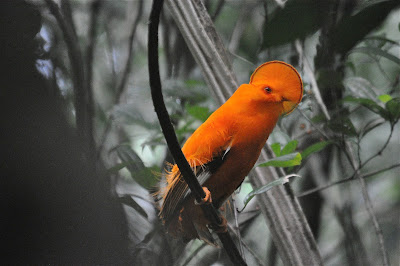 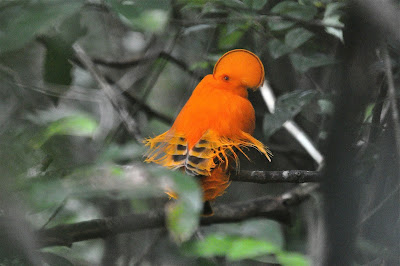 The following day Roong and Jean Francois took me on another full day
Birding Expedition and would accept nothing by way of recompense,
"BUT WHAT GOES AROUND, COMES AROUND"
JEAN FRANCOIS IS PAYING ME A VISIT IN EARLY AUGUST!
Yes, that could just have been said in the first place
and saved posting another Blog, but not as interesting?
OUR 'HEADER PHOTOGRAPH' IS DEDICATED TO
JEAN FRANCOIS AND ROONG