Once (or maybe twice) In A Lifetime 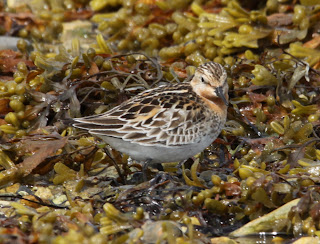 The jury returned a verdict of RED-NECKED STINT
Without knocking the arse out of it, I've had my moment and now a few thoughts before it is confined to the history books. There are a million miles between standing alone on an empty foreshore looking at a strange little bird and sitting in the comfort of your home knowing exactly what it is. For those who have never been there, it's a daunting time and usually one in which you're damned if you do and damned if you don't, but you have to make your own call. Reacting differently may have allowed others to see this 'first for Dorset' (and 8th record for Great Britain) but despite that I have been well met by my fellow 'birders' today. With only a single exception, I wish every birder I know could have seen it but that was not to be, but I thank those both near and far who sent me 'best wishes' last evening and today. As for this Blog, the Stats went higher than ever before to a fantastic 483 'hits' yesterday, mainly due to the kindness of Martin Cade the Warden of the Portland Bird Observatory who highlighted the bird and my Blog on the PBO Website. In addition Dick Filby's company Rare Bird Alert and Steve Gantlett's magazine Birding World have undertaken to feature this find as the number of readers continued to climb. Arriving home at 16-15 I logged-on to witness the 1,000th 'hit' for today clock up and noted that the Falkland Islands and Malta have now also joined our ranks (which I also put down to PBO involvement).

Finally on this subject, I thank you the readers for your interest and hope you continue to look in, and maybe I'll get Dan Pointon off my back as well, having broken the record for the number of texts I have ever received in a 30 minute period - was rather looking forward to seeing you again matey!

One hour after high water today was about 12-30 when I had planned to return to Ferry Bridge for another look, but the signs didn't seem good under a clear blue sky featuring only the sun and a rapidly waning moon. Ideal conditions for Waders, or any other birds for that matter, to buzz off, which also applied to the cemetery where there was a single Coal Tit and several Goldcrests singing, and this 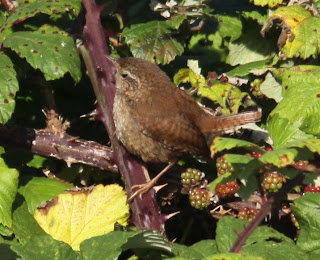 Wren that put in a brief appearance before I headed for the Bill. 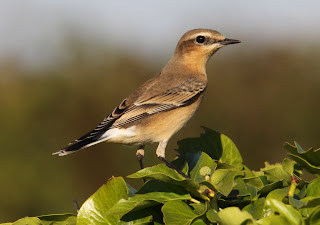 Wheatear featured predominantly at Barleycrates Lane with 30+ showing with c19 Yellow Wagtails in the sheep field. 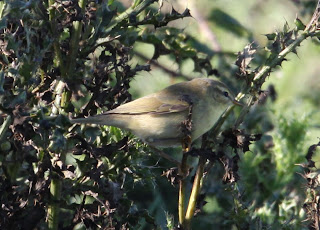 Willow Warblers were also present, plus c2 each of Chiffchaff & Tree Pipit, c4 Raven, c2 Peregrines, half a dozen Gannet, c2 Swift, a Stonechat and a few House Martins. 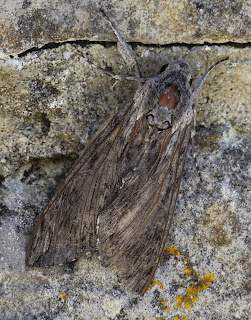 At the Obs there were a few other things including this Convolvulus Hawk-moth that had been released overnight from a bedroom in the lighthouse tower, plus another 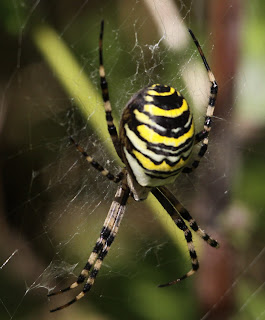 Wasp Spider at least twice the size of the one shown here some days ago. 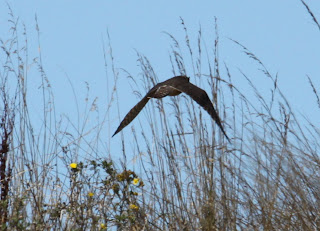 Believe it or not, this is a Merlin. As John Down gave me a lift back to Ferry Bridge this bird was 'posing' on a fence post but only until I tried, unsuccessfully, to photograph it perched!


and if they work, these are 2 further video clips from the Floating Oil Rig Buchan Alpha. One shows an example of some of the migration we used to enjoy (occasionally involving hundreds of thousands of birds), while the other is a Water Rail in an environment you may not have seen one in before?
Posted by Bagsy at 16:15