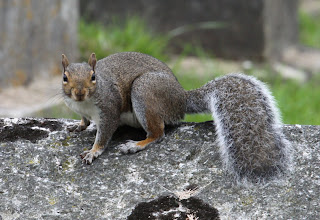 This Grey Squirrel was awaiting my arrival at the cemetery this morning, but apart from a group of feeding House Martins overhead that's all there was. 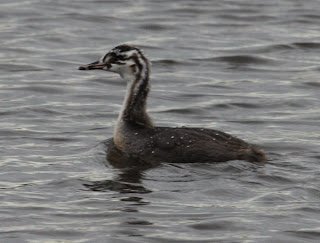 Radipole proved a little more productive with at least c4 juvenile Great Crested Grebes still in attendance, and the common and prolific 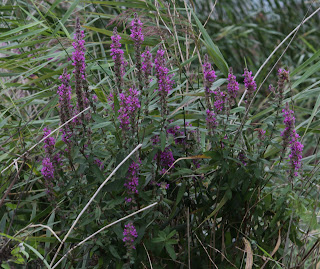 There were also a few Warblers to be seen and heard including Cetti's, Willow, Sedge and Chiffchaff, while c8 Common Terns fished across the lake. Of these the was still one adult feeding a juvenile which had no more than a trace of brown in the mantle, and looked, in my view, to be well capable of fending for itself? Among these was also a larger Tern which with only a fleeting glimpse I had to consider most likely a Sandwich, while here also good numbers of House Martin were in company with 50 or so Sand Martins. A calling Whimbrel attracted my attention as it few from west to east, followed by a Redshank in the same direction and vocal, both looking for somewhere to put down and feed, but both looking in the wrong place here!

I considered it worth a walk up Radipole Park Drive in pursuit of the afore mentioned 'large' tern but didn't relocate it, however I did arrive at one of the angling 'pegs' to see this fine 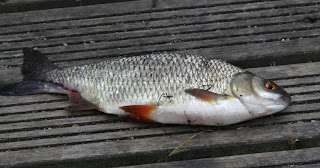 Roach of about 1lb landed and then returned to the water seeming no worse for the experience. This coincided with a text from Daragh Croxson announcing the arrival of c8 Avocet at Lodmoor, which had been my next intended location, so was well placed to pop over Alexander Bridge and down Weymouth Bay Avenue to the moor. Just inside the 5 bar gate a 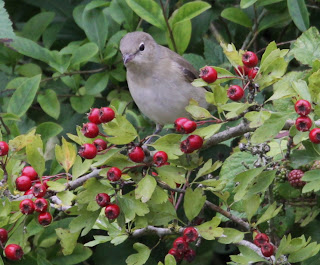 Garden Warbler appeared briefly, but not this one, No, this one was far more obliging further along the track just before I saw c2 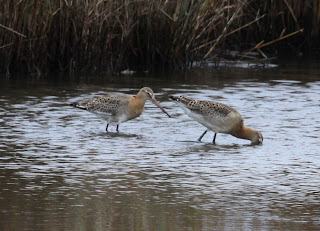 Black-tailed Godwit fly in and commence feeding in the shallow pools. It wasn't long before the 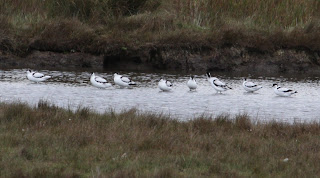 Avocet were in view and while studying these, even more Waders flew in by way of these c9 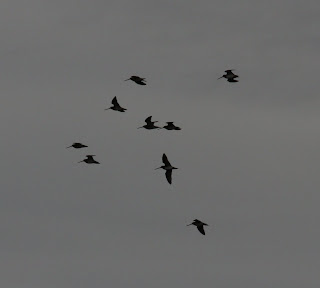 Common Snipe. Further to that there was a single Little Egret, c2 Common Sandpipers, another Whimbrel and a Common Buzzard, but that was all for the moor today. Catching the bus back to Weymouth it was worth a stop to see how the 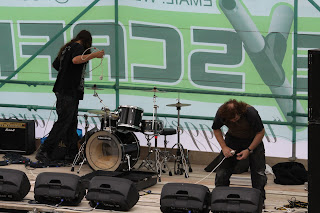 'Roadies' were getting on with preparing the stage for the 2 days Music Festival commencing at 13-00 today. 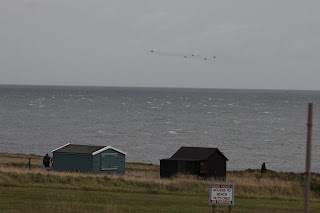 At the Bill things were more mechanical than avian with c11 Red Arrows flying over, but a bit late with the camera, 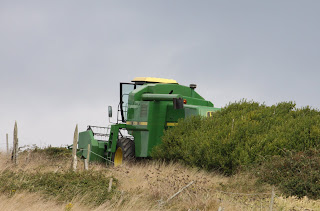 and the tireless Richard Newton was about to start combining in the 'Top Fields', as one of 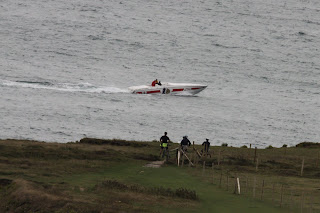 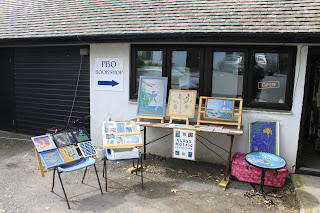 Local artist Sally K Servian also had a mini exhibition of her works from her Chesilisk glass mosaic tile collection, which are for sale. Not restricted to tiles, these 'true to life' and beautifully coloured pieces also include panels, pictures and table tops. Sally can be contacted on 07500349779, info@chesilisk.com or via www.chesilisk.com.
It was now gone noon, and a little late for the 'turn of the tide' but nonetheless made my way to Ferry Bridge where 'bird-wise' it was much the same as yesterday. However, on the other side of the causeway there was an event taking place which was a spectacle in its own right. The kite and wind surfers were out in force, and as the wind had now reached an estimated 6 on the Beaufort Scale all were taking full advantage, 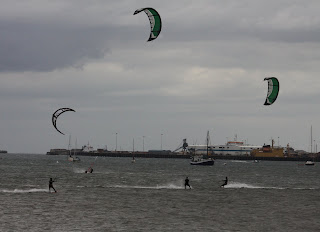 Three 'kiters', each on collision course with the others, had no difficulty keeping out of trouble 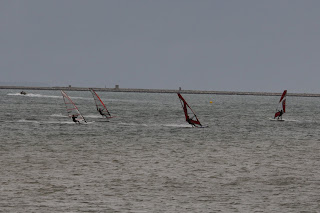 as the 'wind surfers' mingled among them. 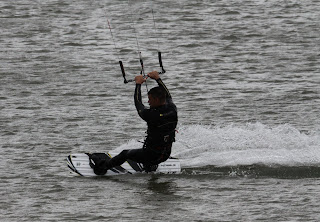 Here one of the 'kite surfers' has just taken the plunge, kicking up a nice wake in the process. 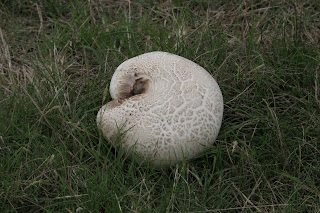 There were a couple of fungi on the roadside verge, but now it was full steam ahead for Weymouth and a basin full of Rock 'n' Roll. 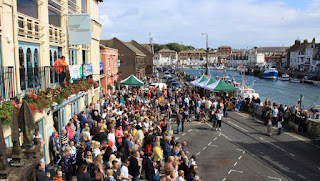 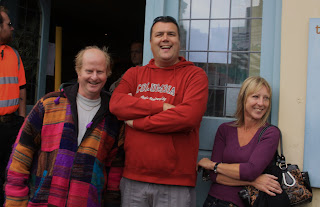 First were Nick Gomer and Chris Whiteside (with his missus) 'Rockers of the Old Brigade. Nick, it seems, has been playing harp (harmonica) with Brahms & Liszt, Red Rooster and Custer's Last Blues Band since the beginning of time, and was just rushing off to Bridport to do just that with the latter outfit. Chris on the other hand has been vocalist with Thin Lizzy soundalikes Bad Reputation since they formed in the mid-80's. 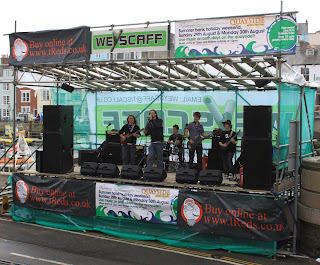 'Sanctuary' are a group of Weymouth youngsters playing mainly their own compositions in a Metallicaesque style and did their reputation no harm this afternoon when they kicked this music marathon off. 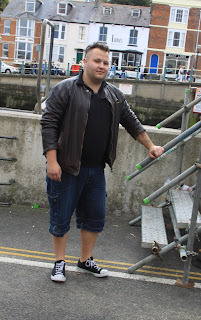 Danny Adams, the man I really wanted to see, was as has become usual running the show, comparing, announcer, sound checker and you name it. I have followed Dan's progress since he was a 'nipper' and I doubt there is anyone more versatile, talented and just down right charismatic than he. Accomplished Bass and Lead Guitarist he made his mark on me one Sunday afternoon gig in Pete Smith's music pub the Park Hotel. Having buzzed around the music business trying to get gigs with a number of bands, like a wasp that just won't go away, he stepped up to the mic and did the vocal on Zeppelin's Immigrant Song. In my view Robert Plant was the only person in the world who should ever sing this difficult and punchy song, but now there's ANOTHER. I know you'll be logging on Dan, so all the best and hope to see you manana! 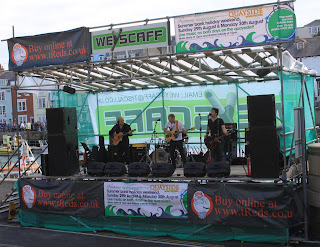 The deliciously named 'Dinner Ladies' filled the mid-afternoon slot with a series of classic 60's, Tom Petty & the Heartbreakers, Travelling Wilbury's, late Bowie et al songs that brought the house down. Numbers you can sing along to always go well at this kind of gig, and when everyone was 'at it' you must have been able to hear it in Dorchester. 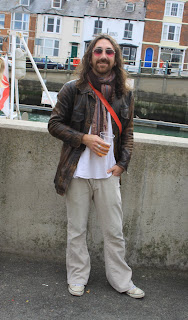 Then out of nowhere, there was 'Fuzzy'! Chris (Fuzzy) Coombs has for a long time been my tip to be Weymouth (Dorset or Great Britain's) next great impresario. Again, someone who has been in and around the local music scene since he was a kid, he now has over 60 bands, 40 of these from the Weymouth area alone, on his books many of which he has personally mentored. 'Fuzzy Music Studios' is based on the Granby Industrial Estate where budding musicians, or anyone else for that matter, can hire floor space, instruments, associate equipment, recording facilities plus production and management technique to get your thing off the ground. He has his own 'Festival' coming up on Saturday 4th September at the Ferry Bridge Inn, Weymouth end of the Chesil Beach Road, showcasing 6 local bands and promises a great evening of 'sounds', commencing 18-00 thru 23-00. Hope to see you there Chris! 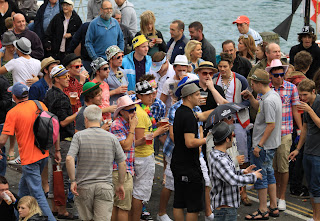 The heavy rain showers did damped the afternoon a little but didn't seem to deter these Lads in Hats, and by the time Johnny Cash tribute 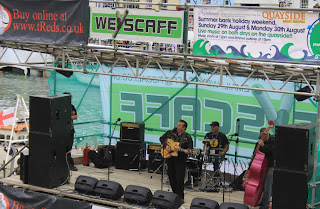 The Man in Black came to the stage I had already had to seek refuge in The Swan (JD Wetherspoons) 3 times.

Looking forward to a return visit tomorrow, when who knows we might meet??
Posted by Bagsy at 20:14