They Only Call Me Mushroom 'Cus I'm A Funguy!

The predicted rain started the moment I left home this morning, but unfortunately was not accompanied by the also promised high wind. It was hoped that this, coupled with stormy conditions in the Western Approaches overnight my have encouraged something interesting to fly over Ferry Bridge (such as a Skua or Petrel) or better still, settle. Unfortunately, the first thing that met my eye, before even reaching the cemetery, was the short line of Elm trees that once stood by the side of the road had been felled! All had scummed to the dreaded Dutch Elm Disease and were probable in danger of falling into the adjacent school grounds, but nonetheless had been (along with an overgrowth of Ivy and Bramble) the regular nesting site of Blackcap, Song Thrush, Chaffinch and Blackbird at the very least.

It would seem that the rain was encouraging bird-song as the graveyard was full of vocalists, not least Great & Blue Tit but the third most active species, and very welcome too, was Goldcrest. Most of the pines seemed to be hosting a number whilst an adult Robin, also vocal, continued to feed a juvenile. 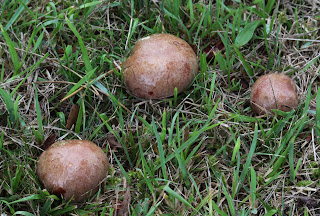 Probably due in part to the frequent mowing, fungi is only occasionally found here so this unidentified species was a welcome sight, although I have to say they look rather like some you could expect to find in the local Asda supermarket.

The Rodwell Trail was also full of song proving particularly that the numerous Wrens haven't gone away but just remained silent of late, and the tunnel of trees gave some shelter from the rain by now getting even harder. At Ferry Bridge the bows of the small boats were all still on an easterly heading, indicating the 'flood' was still in progress but this was short lived as I reached the Fleet Reserve Visitor's Centre. Here the overhang of the building affords some protection from the elements and with the variable wind remaining in the southern quarter it was quite comfortable scanning what birds were there. As yesterday an array of Mediterranean Gulls, sporting just about every plumage phase in the range, were again accompanied by 50 or so Black-headed Gulls and maybe as many as 200 mixed Dunlin and Ringed Plover with the occasional Turnstone. 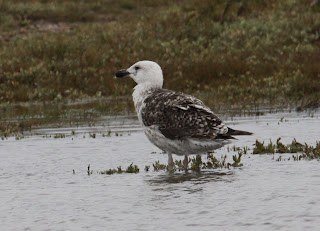 This 'second summer' Great Black-backed Gull was one of just 2, the other being an adult, 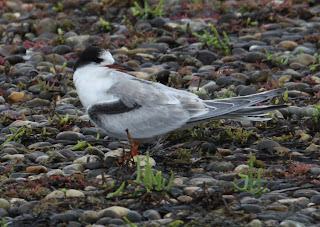 while more interesting was this juvenile Common Tern which landed only briefly, 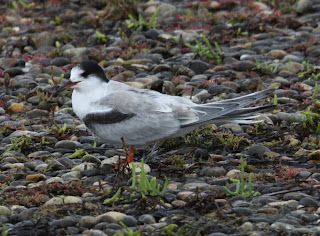 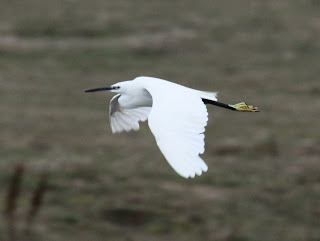 A lone Little Egret was the only other feature of note as it flew back and forth a few times, and so to add a little more interest here are a few more images, from the archive, of scarce and rare visitors to the UK over previous years. 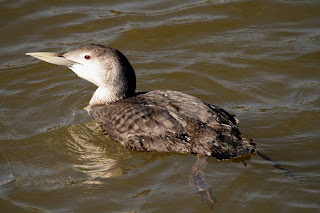 White-billed Diver at Copperhouse Quay, Cornwall, and an 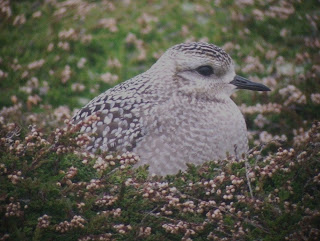 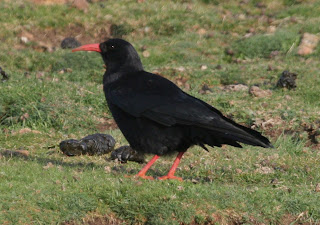 This Chough was photographed at St David's Head in Wales, while a male 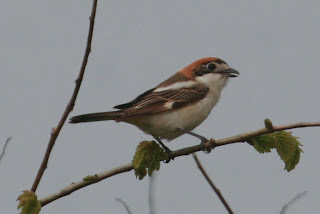 Woodchat Shrike was much closer to home at Portland. 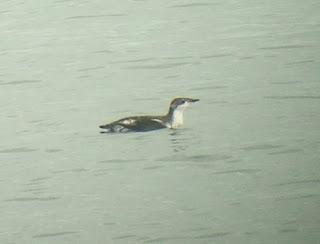 Long-billed Murrelet couldn't even have been on anyone's 'fantasy list' as this highly unlikely individual paid a visit to Devon in November 2006. I recall 'twiching' a close relative of this bird, an Ancient Murrelet, on Lundy Island (12 miles off the coast of Devon in the Bristol Channel) in June 1990. Accompanied by birding friend Hugo Wood-Homer, I well remember my words as wedescended the steep cliff to meet the awaiting M/V Oldenburg for a return to the mainland, "we'll never see another Murrelet in the UK in our lifetime", and the taste of boot leather on the occasion described above!

PS:- The Murrelet is the only one of the 5 species featured that has not been recorded in Dorset.
Posted by Bagsy at 15:20