Tide & Time Wait For No Man

After periods of heavy rain overnight, the day dawned with overcast sky, high wind but the rain had stopped. Complete with foul weather gear it was another wander down to ferry Bridge for me to catch yet another ebb of this weeks spring tides. Great Black-backed, Herring, Mediterranean and Black-headed Gulls were already in place on the grass margins and shingle, as a group of Dunlin and Ringed Plover appeared to be feeding a little further up the beach, but first to arrive were this family group of 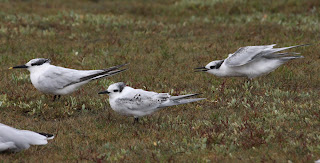 adult (left) and 2 juvenile Sandwich Terns. I say family group as both youngsters were begging from the parent bird, but it was content to just rest and take little notice.

One of the juveniles in size comparison with a Herring Gull, 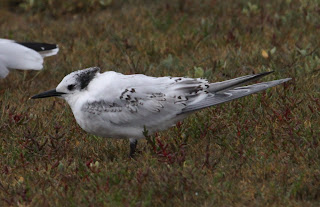 plus a closer look 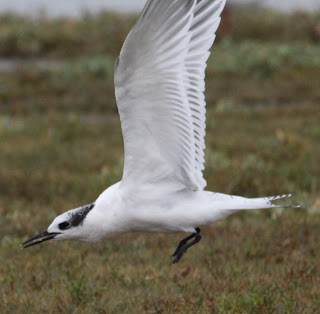 and one in flight

High water was at 09-30'ish, with these tides seeming to have a quick change around. It seemed very short time between the 'flood' ending and the 'ebb' getting underway as by 10-30 some of the foreshore was already exposed. It never ceases to amaze me the rate of flow and the volume of water that pass through 'Small Mouth' (over which Ferry Bridge runs) an outlet of less than 100 yards? 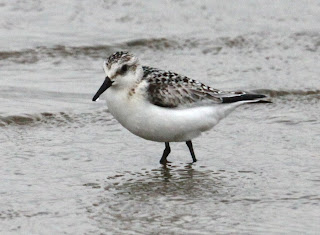 I had already seen this Sanderling among the mixed flock feeding on the beach, 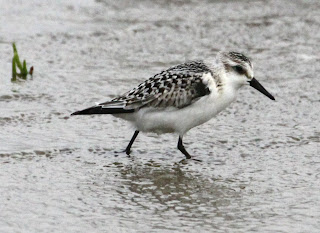 and lucky for me it was one of the first Waders to arrive at the waters edge. 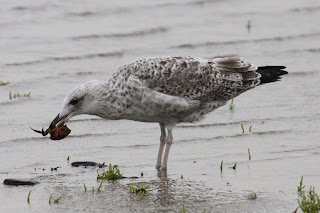 A small Black Crab wasn't so lucky as this young Herring Gull made a quick mid-morning snack of it. 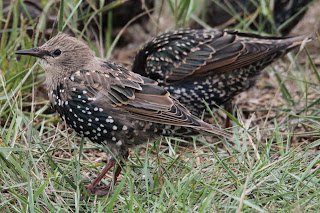 The attendant flock of Starlings, mostly juveniles, that forage around the car park and cafe are 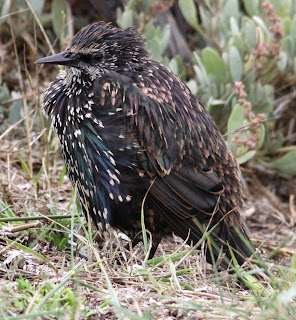 now about 150 strong and in a variety of plumage's.

Having experienced a couple of squalls and the tide well out I decided on an early trip home, where I dug out of the archive a couple of video clips taken on the Buchan Alpha Oil Rig stationed 120 miles north east of Aberdeen, Scotland.
Perhaps they should be titled 'Grub Up On Deck'.

This Black-headed Gull caught this hapless Brambling on the helicopter deck, 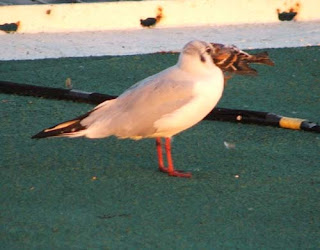 shook it to death and then 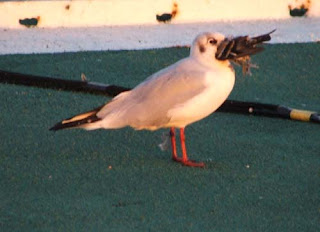 A Merlin (Great Britain's smallest bird of prey) caught this prey item (can you identify it?) 'on the wing' and dispatched it among the pipework. The noise is from the Gas Compression Module (GCM) which sends 'produced gas', from the oil well, back down the hole to force up the oil.

and finally there are 2 messages I would like to convey, firstly to the people of Chile (and especially Jacqueline and all the others at the Hotel Sotomayor ) that many, many of us in the UK are thinking of those 33 brave men trapped in the mine, hoping they are soon rescued and returned unharmed to their loved ones.

and secondly a big welcome to the 'readership' to those on the Faroe Islands and in the Islamic Republic of Iran, who become countries number 90 & 91 to join the ever growing list.

Please send this link to your friends - Thank You!

It was pretty obvious the prey was a Redwing - yeah alright!
Posted by Bagsy at 19:10