Before dinner yesterday evening, there was time to visit the North Cave Wetland Reserve a series of small flooded gravel pits not far from Jim & Liz's home. The area has been sympathetically rejuvenated for all manner of wildlife, but with birds in particular in mind. The walkways, paths, hedges and wooded areas are maturing very nicely, but it's the 'hides' that steel the show with a host of bird identification plate, comfortable seating and all round panoramas. There was nothing considered rare here but a Little Ringed Plover was the highlight, while 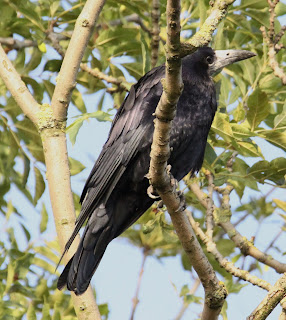 several dozen Rooks perched in a nearby tree, 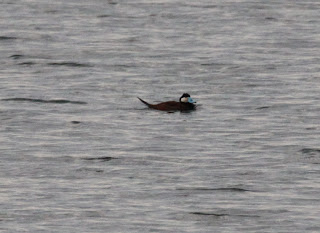 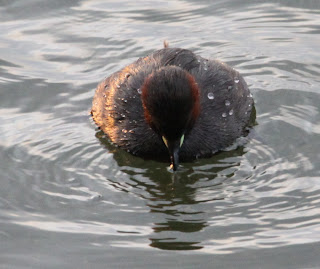 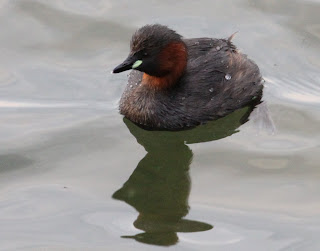 directly below the hide window.

Back home Jim had made a delicious Spanish Chicken dish and produced 2 bottles of wine that I should pass on to the readership. One is simply named Black Label and produced from a blend of grapes by Australia's McGuigan family (retail £6), while the other named Charlie Herring is a Western Cape South African Tau Syrah, vintage 2007 and sells for £20 per bottle. These are strongly recommended if you can find a source. The sing song that followed, accompanied by Jim on his ukulele lasted until the early hours.

All there is to report today, is a drive of some 90 miles from Humberside back to Derbyshire, where I will be spending 3 days with oil rig mate Andy Lindsay in the village of Melbourne. It is planned to go for a pint late in the Bull's Head at Repton, so who knows we may well bump into Roy Wood again (that wood be Wizzard - get it?).
Posted by Bagsy at 18:28