Born To Be Wild

Returning to yesterday evening before we commence today's events and the Ferry Bridge Festival. A chance to 'showcase' a number of younger (and at least one not quite fitting that category, sorry Nick) local bands, Producer 'Fuzzy' Coombs not only arranges and organises the whole gig but lends his equipment to these up and coming talents. Not on quite the same scale as the Quayside bash of last week-end, but the landlord of the 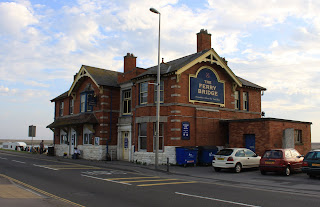 Ferry Bridge Inn had arranged the stage (on a lorry trailer), an outside bar and eats by way of roast pork rolls and a bowl of Crackling (rendered pig skin) me being first in the queue for the latter! Things were underway by the time I arrived, with the 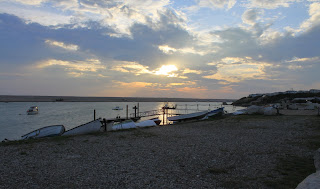 weather looking fair set, half a decent sunset while 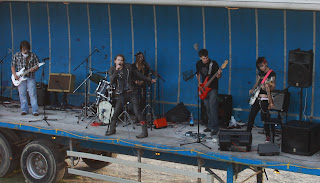 Desert Rose, name derived from the U2 track 'In God's Country',

Desert rose
Dreamed I saw a desert rose
Dress torn in ribbons and in bows
Like a siren, she calls to me
were giving it big licks with the Steppenwolf classic Born to be Wild. As a point of 'rock trivia', the lyric of this song is where the term 'Heavy Metal' was derived, with the second verse reading:-

The Skint Imperials (Rob Ryan guitars, Barbara Stanley vocals and her partner Nick Gomer harp ably assisted by Fuzzy trying to get the 'balance' right) who kicked off with yet another legendary number, the Dylan/Danko penned 'This Wheels on Fire' originally written for inclusion on the 1967 seminal album The Basement Tapes - Bob Dylan & The Band, then covered by The Byrds, Siouxsie and the Banshees, Leslie West, Golden Earring and The Hollies to name but a few. In '68 the cover by Brian Auger and the Trinity featuring Julie Driscoll reached No 5 in the UK Top Twenty, all of this not doing Mr Zimmerman any harm in the process.

and so to today, the weather looking a little threatening with rain baring clouds overhead and the wind a little more towards the south east at least made it a little warmer than of late. Going anywhere seemed a little risky, but with a low tide Ferry Bridge was always going to be worth a look. Walking over the bridge this 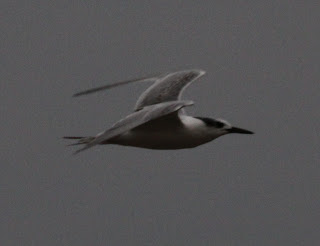 juvenile Sandwich Tern crossed my path and before reaching the fore-shore, there were c2 more, what must have been yesterday's Bar-tailed Godwit all in company with a 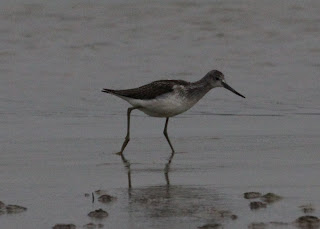 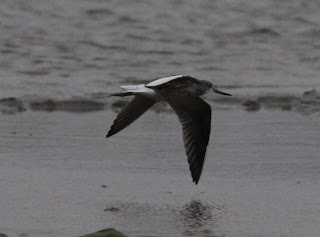 Without disturbance, most things seemed 'flighty' this morning with both 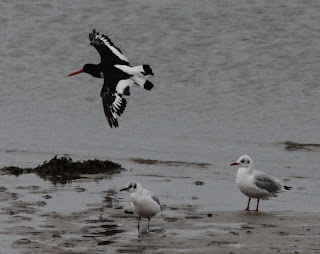 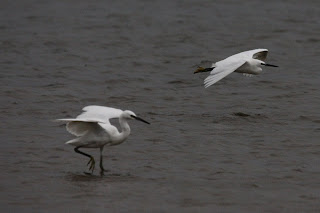 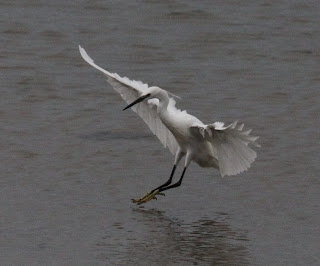 demonstrating their flying skills. In addition there were several Dunlin and what must have been 4 times more Ringed Plover, while Turnstone were represented by c21 individuals plus singles of Curlew Sandpiper and Curlew.
Finally, and as half promised yesterday, a few more shots from the archives:- 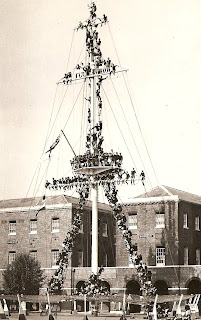 'Manning' (or Boying in this case) the Mast, HMS St Vincent 1961. Unlike HMS Ganges, the other 'Boys Training Establishment at Shotley, Suffolk, there was no 'button' at the top of this mast. A one foot square platform would be where the most promising Junior Seaman on course would balance at take the salute during ceremonial occasions. However, no one was excused undertaking ALL the routes to the top, including the Devil's Elbow running at a 45 degree angle from the lower yardarm to the first platform. Tree climbers always had the advantage here! 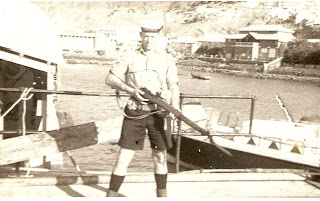 Crater City, Aden, The Yemen 1966 on-board Tribal Class Frigate HMS Eskimo. Car bombs were a daily occurrence during the British withdrawal, so armed patrols (Enfield Rifle or Lanchester sub-machine gun, clip of bullets and 2 hand grenades) were crucial to a safe exit. I for one was always a little perturbed wearing blue combats and a white hat under such circumstances. In the background, just the lower reaches of a range of Jebals (small mountains) can be seen and what better place for snipers to operate. Even better, what a target aim one inch below the white and one inch above the blue and you 'bag' yourself a matelot! 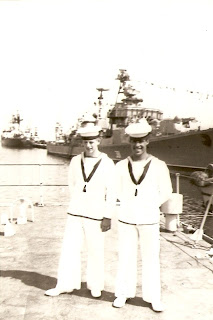 Me and Mick (Huck) Hutley in Mitsiwa (Massawa), Ethiopia (now Eritrea) 1967, for the 'passing out' celebrations of Haile Selassie I's grandson as a Naval Officer. This was a grand affair with dignitaries from many of the world's nations in attendance, and the man himself inspecting the Guard of Honour of which Huck and I were part. Great Britain was represented by HMS Eskimo, while the USA sent the destroyer USS Charles H Roan and the Russians a Kotlin Sam (Surface to Air Missile) Destroyer, visible in the background, all of whom plus the Ethiopian Navy took part in a series of sporting events, Eskimo coming a creditable second after the Yanks. 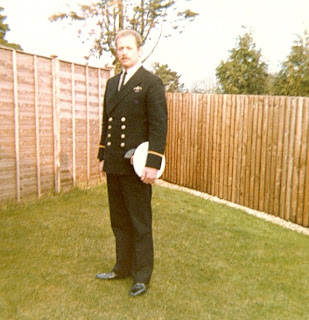 and a 'brand new' Second Mate, straight out of the box.

I hope the readership enjoyed this little bit of personal nostalgia!
Posted by Bagsy at 17:48