Only What Was Expected Today

With just high wispy cirrus cloud marring an otherwise clear blue sky and a gentle zephyr from the east, it was another good day for birding and starting, as usual, in the cemetery good to hear so many Goldcrest again. There seem to have been double figure there over the last couple of days, and if they are breeding birds they have kept a very low profile during the season. I don't remember the last time I 'saw' c2 Coal Tits there, but what may have been a pair lingered in a fir tree for a few seconds before flying off together. All else of note were a few Willow Warbler and a singing Blackcap. 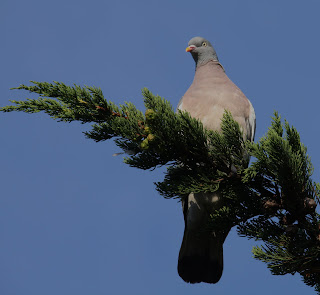 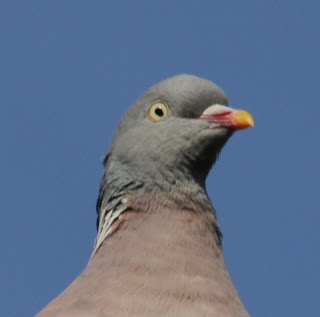 species so a detail is added here. Before leaving a large raptor flew into the sun allowing me to see there were a couple of feathers missing from the right wing, so simple noted Raptor Species. Checking the Portland Bird Observatory web site this afternoon, there had been a Marsh Harrier there this morning with a similar wing formulae, which may have been the same bird??
My arrival at the Rodwell Trail was met by the view of c5 Blackcap and a female Bullfinch all in the same Hawthorne bush, and the singing of at least 3 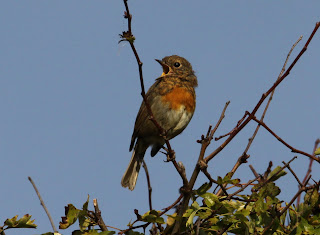 Robins. This one, a juvenile, looks well into its moult, and by the time I reached the end of the trail it was obvious they had outnumbered Wrens by at least 2 to 1. Overhead I had noted a large movement of hirundines, mainly Swallow but a few Sand Martin as well, with many lingering to take a final feed before reaching the coast. 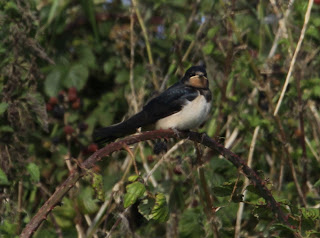 Of these, I considered myself lucky to get this series of shots which start with this young Swallow awaiting the arrival of mum (or dad) with the groceries. 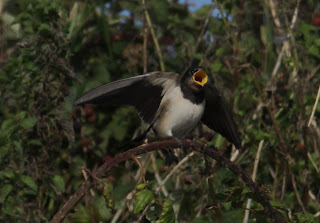 Catching sight of the parent it displayed its gape 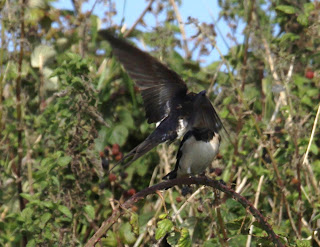 and was duly fed before the adult 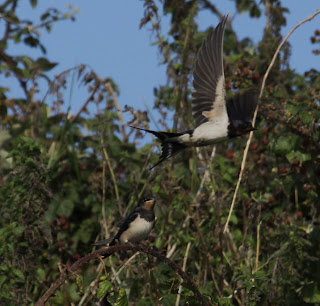 flew off to catch another beak full.

A search of the fully exposed sand at the fore-shore produced more or less a blank, but there I met Peter and Debbie Saunders who had seen, and photographed, both a Bar-tailed Godwit and c3 Curlew Sandpipers (the latter all in a single frame), good photies Pete! 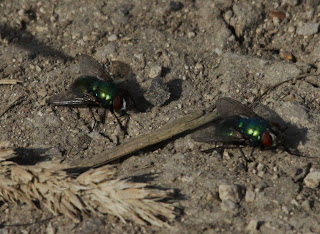 Barleycrates was as bare as the shore line, but these 2 'flies' seemed to be glowing in the bright sunshine. I did search the Field Guide but won't even both with a calculated guess. 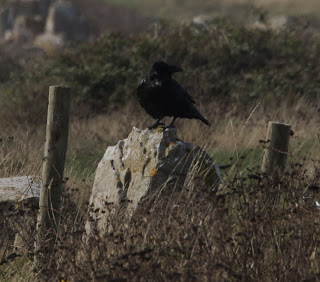 At the cliff edge this Raven was perched, surveying its domain while a 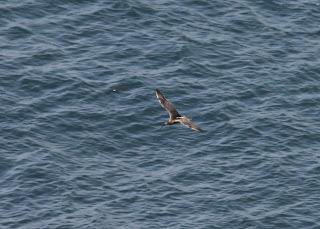 Whimbrel appeared at the base of the scree, flew a couple of hundred yards out to see before returning to the rocks.

and finally, what might be the last clip of video footage from the Buchan Alpha Oil Rig, this time featuring Long-tailed Duck.
Posted by Bagsy at 18:13