Sunny, fine, warm, a light breeze that had backed into the west and as ever a fair chance of a bird or two. With little of note in the cemetery, it was across the bye-pass to Radipole which once served as my favourite few acres on earth, but the RSPB have put paid to that. There were a few Chiffchaff and Willow Warblers along with the odd Sedge Warbler, but most of the action was at the bridge close to the Visitor's Centre. Kingfisher and Common Snipe were feeding along the margins as a pair of Common Terns continues to tend the needs of their offspring, while a 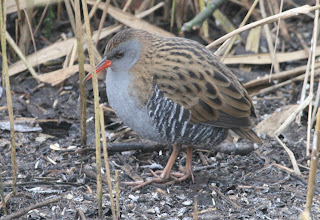 Water Rail scurried in and out of the reed-bed. That being all I walked, via the sea front, to Lodmoor where yesterday's grand collection of Waders remained pretty much as before, except for the addition of a Black-tailed Godwit that appeared newly arrived, and more 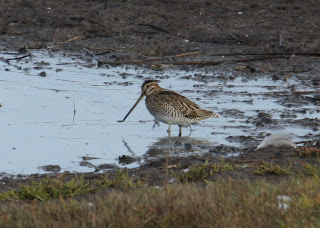 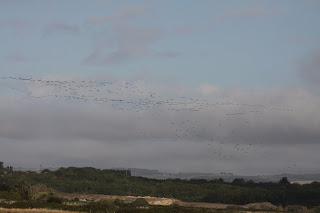 Additionally, and of interest were the vast number of Canada Geese that flew in, I don't remember seeing quite that many here before, and as they came to land 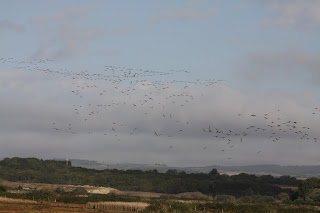 each corkscrewed in a maneuver known as 'whiffling' effectively loosing air from under the wings to allow rapid decent. 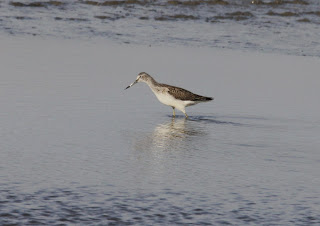 Greenshank, likely one of the c4 seen yesterday. 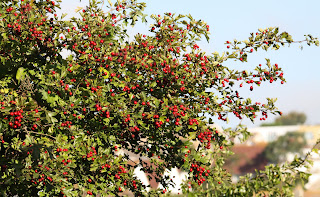 It is also good to see so many berries on the bushes, like this Hawthorn, which should the weather get severe like last winter, could be the savior of many a northern Thrush such as Redwing and Fieldfare.
I had timed my visit to the moor to coincide with the daily opening of the Sealife Park from where I have recently received a complimentary invitation, but as I reached the furthest point of my walk there was a text from fellow birder John Down announcing "Pec Sand at Fancy's Close, Portland"! Roughly translated, it was to tell me that a rare vagrant Wader had been found in the village of Easton at the Top of Portland, and the invitation was put on hold. 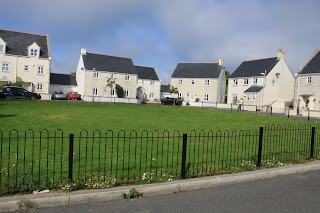 Fancy's Close is next to the road I used to live in and is a recent addition of very nice town houses, surrounding what might be described as a small 'village green', but not at all likely a place to host a 'rare yank'. I think if you magnify this photo you can just see the bird close to the sapling in front of the dark coloured car, central! But don't worry, here are a few better shots.

When I arrived, after a second 'twitchy' bus ride from the other side of the Borough, the 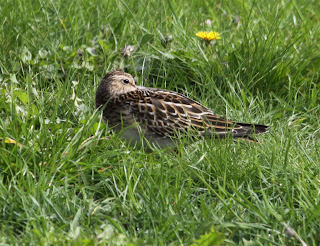 Pectoral Sandpiper was resting, head under wing, and certainly not showing any concerns about the human activity around it. 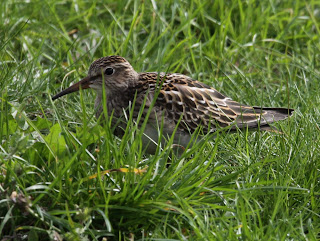 In fact it was soon made clear that this was the second day that it had been here with the residents putting the news out today. 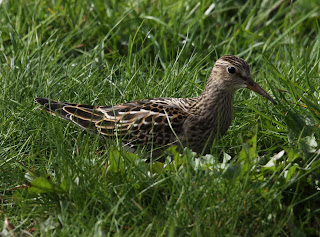 During this time, children had been playing football and other games on the grassy area, and each time the ball went near the bird it simply hopped out of the way. 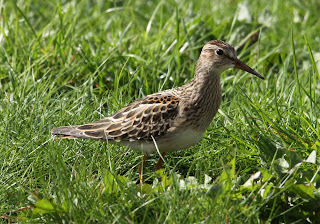 The Pectoral Sandpiper (showing the band where the lower breast meets the belly, giving it this name) breeds across Northern Siberia, Arctic Canada & Alaska with most spending the winter in South America. 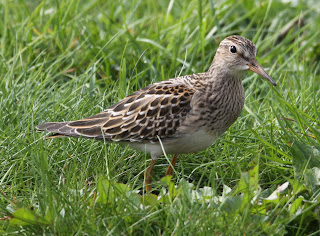 Some do however visit south eastern Australia & New Zealand during the freeze, 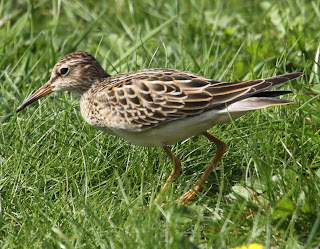 with the odd one, luckily, popping into the UK en-route. 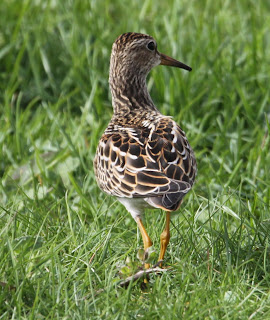 It should also be noted that this couldn't have been a better location for a minor twitch, as the grassy area is fenced off ('most' birders keeping outside of this I am told), there is more than adequate car parking, the light & weather were good and even the locals friendly and enjoying the moment. Birding mates Peter & Debbie Saunders told me that one lady came out of her house and asked if anyone would like a cup of coffee or tea, which one or two observers took up, including themselves.

This visit then tied in perfectly with the 'turn of the tide', so Ferry Bridge was the next stop. Unfortunately, nearly a total disappointment with very few birds save the usual Dunlin, Ringed Plover, Turnstone and Mediterranean Gulls. However, this is a hobby where things are rarely still and there's usually 'something' to be seen, as this sequence of photographs show.

Walking over the bridge, I stopped to watch this 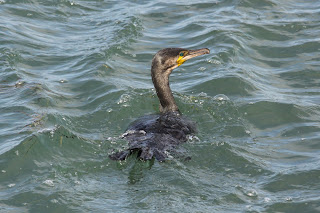 Shag hunting and had decided to take a few shots anyway. 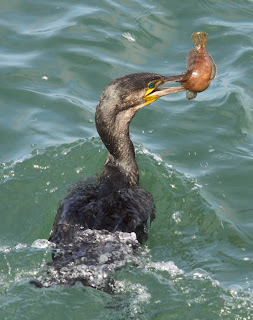 Big bonus then when it surfaced with this Blenny. 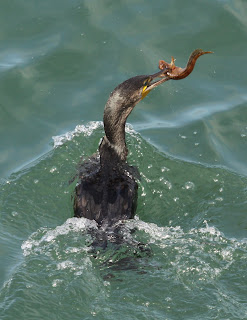 On size alone, the fish is though to be a Tompot Blenny, as its smaller cousin the Common Blenny only grow up to about 30mm. 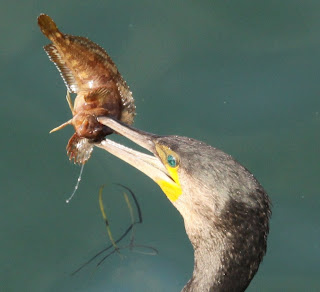 Either way it made a tasty snack for the Shag, and it can be seen from these 'details' it had 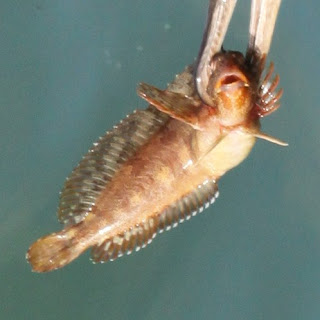 no intention of letting it go with a pincer like grip in the eye sockets. It did swallow it, as Shags do, in one easy gulp. 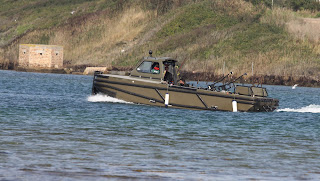 and finally, this Army 'work boat' passed by on its way back to the Bridging Camp further down the Fleet.