It was a blessing to both human and wildlife today to see the sun break through, but a chilly start meant an early jacket and scarf. These were soon discarded as what little cloud there was dissipated and things could only be described as 'hot'. Even early, the birds in the cemetery were vocal and on my approach there was already evidence of Long-tailed Tit, Robin, Dunnock, Goldcrest plus Coal, Great and 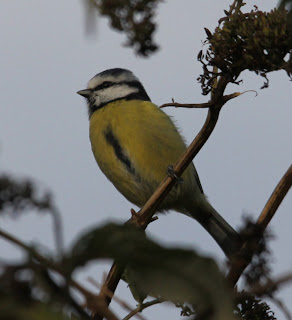 A little unexpected were Sand Martins, still in small numbers, but the greatest surprise came by way of c2 Pied Flycatchers. Not unheard of, stragglers have been recorded through October, but not usually a species associated with this month. In addition these were the first I have ever recorded at what is considered my 'local patch' so a good addition to that list. 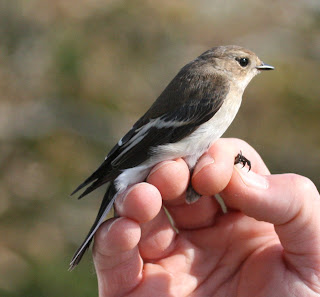 Pied Flycatcher, this photograph is taken from the archive for illustration purposes, was not the only welcome species as a small group of vocal Siskin flew overhead, Swallow and House Martin also appeared, plus a single Great Spotted Woodpecker albeit briefly.
Walking the Weymouth Inner Harbour, known as the 'Backwater' by many, the large shoal of Grey Mullet continued to cruise the shallow, but while they are known to be capable of tolerating a certain amount of pollution 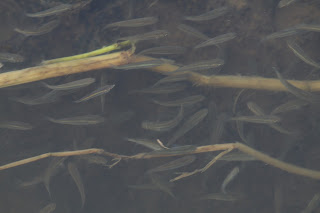 European Smelt (or Sparling) certainly are not. Seeing these dainty little fish, which both taste and smell like cucumber, indicates there can be little wrong with local waters.

Moving on to Ferry Bridge, again at snail pace, there is little point in using the words 'traffic jam'. Weymouth at the moment is at a halt due to major road works in every direction, but the good new at least for this stretch of road at the Portland border is that the works should be complete this very day. 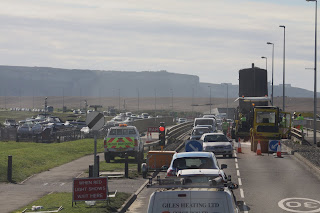 Maybe these scenes can now be confined to the history book??

Not unusually, dog walkers who are prepared to ignore the signs requesting that they do not exercise their animals on this sensitive feeding area for migrating bird, spoilt the show once again today. 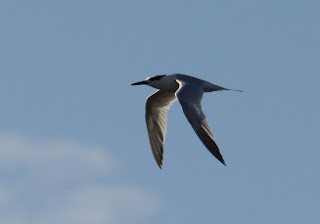 c4 Sandwich Tern were unable to touch down because of them, while a single 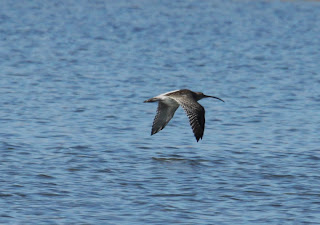 Curlew hightailed it to the sanctuary of the upper Fleet. I can imagine these individuals sat at home in front of their idiots lantern bemoaning others who grind Tiger bones for aphrodisiacs or use White Rhinoceros horns as trinkets, but never give a thought to the damage they are doing themselves. The Barleycrates area (along with most other parts of Portland) was once again teeming with 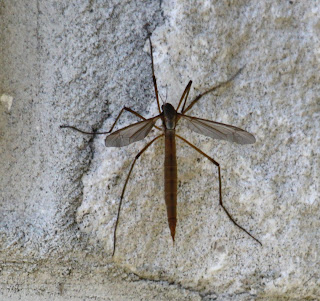 Crane Flies much to the delight of House Sparrow, Meadow Pipit and Pied Wagtail alike making for a small but doubtless tasty meal. However, they were not the only insects in evidence as this warm day was also a Butterfly day. The path leading to the West Cliff and flanked by Ivy and Bramble bowers where alive with thousands of Bees and an array of Butterflies including 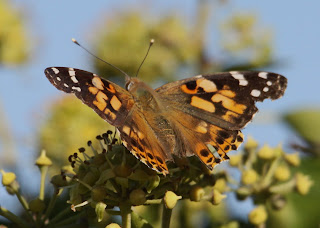 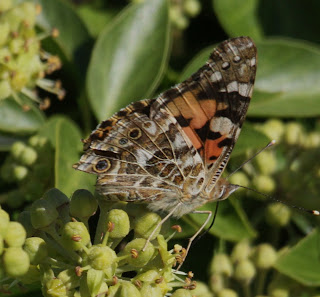 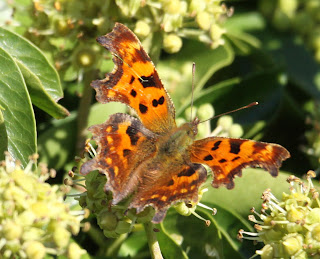 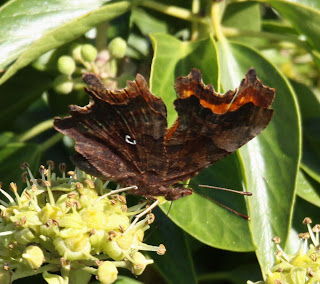 showing the small silver 'punctuation mark' on the under-wing from where it derives its name, 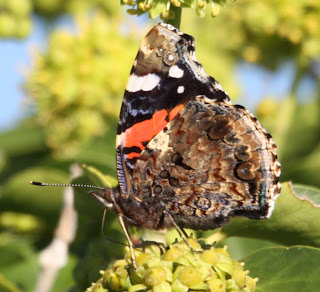 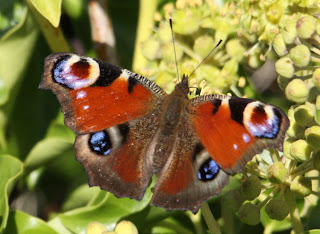 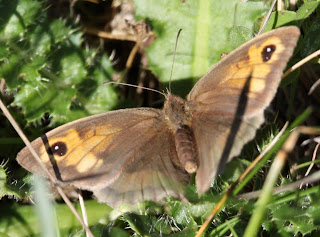 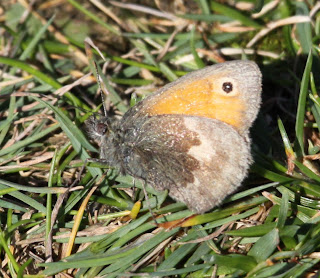 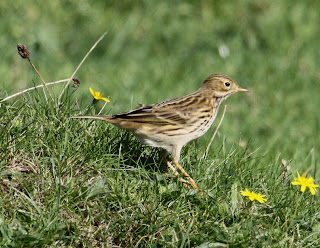 On the way to 'The Bill' many Meadow Pipit were seen, and on the exposed ledges many Alba Wagtails were seen with just one or two 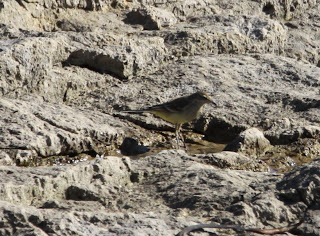 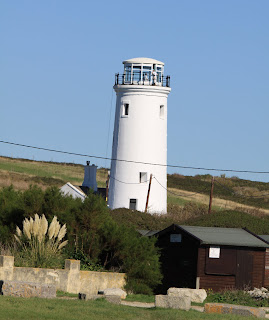 From there I could already see the now shining white Portland Bird Observatory as the lads from Hayle, Cornwall put the finishing touches to the new weather coating. Safety and work lines can be seen running from the platform down the left hand side. At the Obs there was also much to be seen and learnt as firstly this 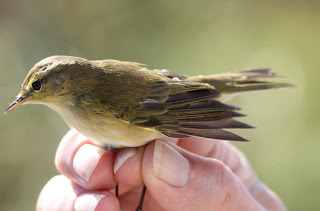 Chiffchaff was taken from a mist net, 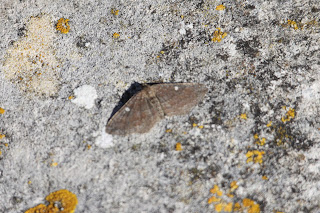 a Gem Moth female (very distinctive from the male) something I have never caught or seen for that matter, recently released from last nights catch and a particularly large and strange insect I rescued from the lounge window. The Warden Martin Cade was quick to enlighten me that it is a 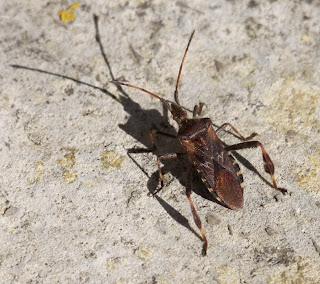 Western Conifer Seed Bug. Formally confined to the USA it was transported with timber cargo's to this side of 'The Pond' and has since become common throughout. The news of an uncommon Warbler at the Southwell School was enough to send me packing and on the way came across these 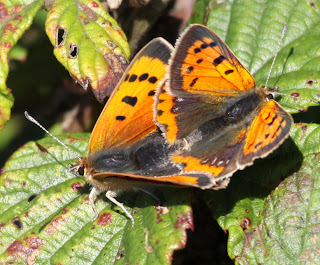 Small Copper Butterflies. If my memory serves me enjoying a little post season 'nonsense' is most enjoyable! 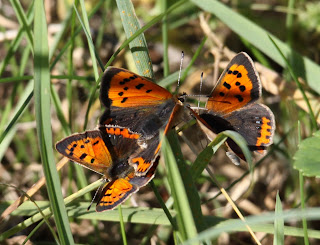 A half hour search for the afore mentioned Warbler was rewarded with 3 fleeting, but identifiable, glimpses of a 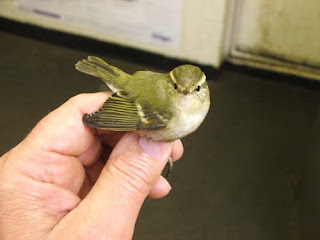 Yellow-browed Warbler. My most memorable moment concerning this species was a total of c7 all together on one helicopter safety net aboard the Oil Rig 'Buchan Alpha', in company with a single Pallas's Warbler. Unfortunately, no camera was at hand to record the event, but my rig mate David Penney simply plucked one from a fire hydrant which we were able to photograph (above) and rest up before release back to the wild.