A Bit More Going On Today

Weather conditions were a carbon copy of yesterday, even to the point where 'grey' was replaced by 'bright' almost on the stroke of noon. In the cemetery too things were more or less bird-less similar to Saturday except there was a small movement of Corvides with as many as 30+ Rooks and well over 50 Jackdaws all heading south.
With high water throughout most of the forenoon, Barleycrates and the Bill were again the obvious choice and immediately there were signs of more birds than previous days. Plenty of 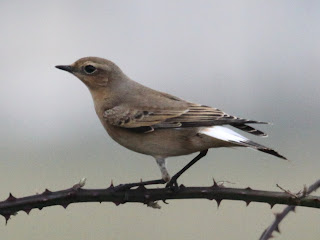 Wheatear, which over the course of my walk 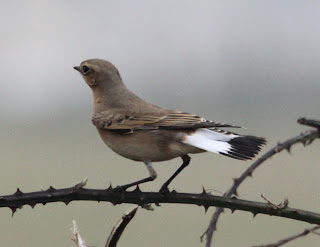 must have amounted to three figures. Also in that division were Swallow, Meadow Pipit and Linnet while Stonechats were represented by 6 individuals. 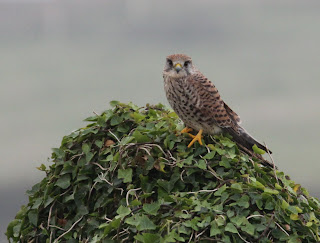 This single Kestrel was just too close to miss the opportunity of a photo, while 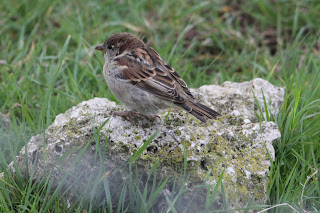 House Sparrows, in decline over the past few years, seem to be doing OK in the county now? 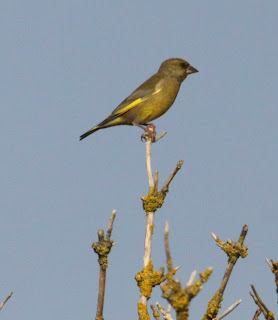 Greenfinch, this one at Culverwell, I understand are not doing quite so well as they seem to have been susceptible to a virus that is killing them. Also in this vicinity, chattering from above brought to my attention the first c2 autumnalFieldfare, in the bushes a single male Blackcap and walking down the path Dr George Green. Author of The Birds of Dorset and co writer (along with Martin Cade ) of Where to Watch Birds in Hampshire & Dorset, it must be at least 5 years since I have seen George. Good to see you if you're reading this! 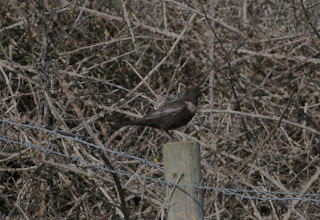 Along the way there had been reports of 'a few' Ring Ouzel and among the Elders at Culverwell I was to get mine. Unfortunately a little obscured so the photo is from the archive. 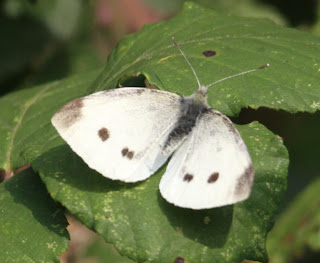 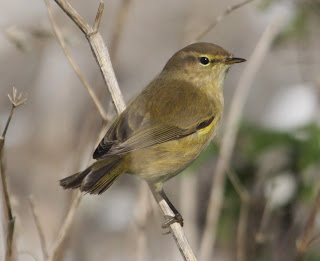 Chiffchaff one of several along with more Goldcrests. A coffee at the Observatory and I was soon on my way to the bus as c2 Lapwing flew into the Top Fields joining a veritable 'cloud' of Linnets.

A strange occurrence at Ferry Bridge where c42 Mediterranean Gulls were busily feeding with a few Black-headed Gulls. Not on marine life as you might expect, the food source being 'on the wing'. As the tide ebbed at a great rate through the Small Mouth the Gulls were content to sit on the surface picking off flying insects until they reached the span of the bridge, at which point they would fly 200 yards back up tide to continue the circuit. I have not witnessed this before. 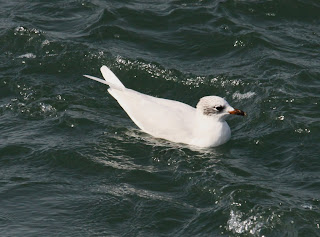 Mediterranean Gull feeding as a party of 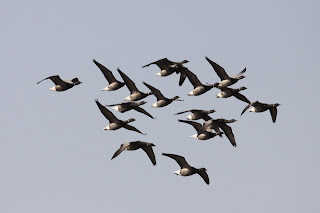 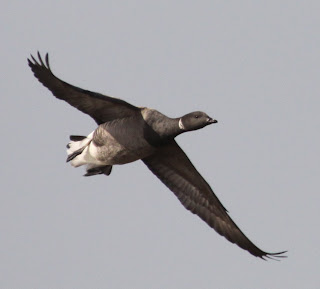 a couple of aerial 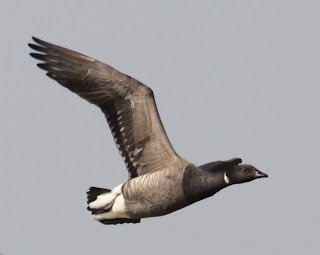 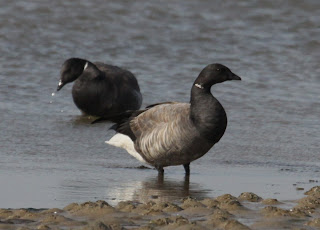 We come from the land of the ice and snow,
From the midnight sun where the hot springs blow.
Hammer of the Gods will drive our ships to new land,
To fight the horde, sing and cry: "Valhalla, I am coming"!

On we sweep with threshing oar, Our only goal will be the western shore.
Immigrant Song - Led Zeppelin OK, the song was written with the northern hemisphere in mind, but apart from Valhalla it seemed to fit very nicely with Antarctica as well. A few more photos from the vaults. 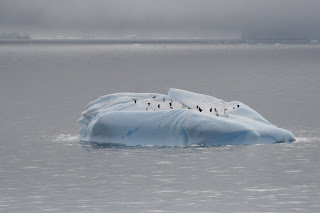 Adelie Penguins on a 'Bergy Bit' (the name given to small Icebergs), Antarctica.

The Arktowski Research Station (Polish) on King George Island, Antarctica the largest of the South Shetland Islands. The lighthouse is the most southerly in the world. 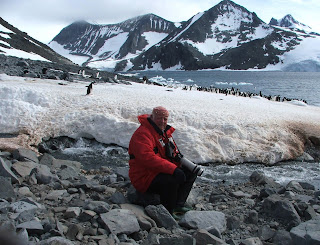 Perched on the Trinity Peninsula, Mainland Antarctica with Adelie Penguins.

Passing Point Wild, Elephant Island, Antarctica. This is where Earnest Shackleton left 22 of the crew of the stricken Endurance while he and 5 others sailed in an open boat, during winter conditions, to South Georgia to effect the rescue of his men.


and finally we are pleased to welcome the latest (101) country to our readership, Libya. Thanks for logging on, we hope you enjoy the site and if so maybe you will pass on the link to others in Libya Arab Jamahiriya. There has been a slight adjustment to the countries list as Jamaica featured twice on the definitive list.
Posted by Bagsy at 18:01