Too Old to Rock 'n' Roll , Too Young to Die - Jethro Tull

Well, I think we can safely say last nights dinner with Bowie & Sheila was a great success, and generated a couple of recommendations. Firstly, the wine drunk with Spanish Chicken (recipe donated by Jim the Medic & Liz) was the first bottle of a recently purchased case of vintage 1998 Feytit Clinet. A Pomerol reputed to be a neighbouring chateau of the 'millionaire's row' Petrus and Le Pin, regardless it was unanimously agreed the best 'red' any of us had drunk for a long time. If indeed there is any interest, let me direct you to the Antiques Wine Company owned by our friend Stephen Williams.
Secondly, long time friend Andy Lindsay had suggested I take a chance on the Rolling Stones DVD Shine A Light, which was saved for this occasion. Not proclaiming to be Jagger & Co's most ardent fan, I did first see them play the now defunct Gaumont Cinema, Weymouth in 1964 and have been fairly satisfied with their output ever since. Once asked if I thought Keith Richards was the best guitarist in the world, my answer was I don't believe he's even the best guitarist in the Stones, but last night my opinion did alter slightly in his favour. With the total age of the 4 remaining members totaling 250 at the time of recording (2006) there would have been reason for a little puffing and panting, but apart from Charlie Watts (65 then) showing a little fatigue after the third number Brown Sugar all were strutting the stage like 18 year olds. Watts did get his second wind soon after. As for highlights, my all time Stone's favourite is the cleverly penned Sympathy For The Devil which was performed immaculately, but this paled when they introduced Buddy Guy to help them with Champagne & Refer. One of the real Blues legends and one of my personal inspiration, his composition First Time I Met The Blues was the second track of the genre I ever heard. After hearing that soon after Howlin' Wolf's Spoonful that was me sold and in addition having been born on 30th July 1936 he looked the youngest dude on the stage.

Get out and buy them both!
So on to today, which to say the least started 'grey' and barely improved until late afternoon. The wind had backed a couple of points, today showing directly east and was definitely at the lower end of the 'gale force' vector. However, while looking threatening the rain held off and with a total blank in the cemetery I headed directly to Portland. At Barleycrates Song Thrushes were in evidence with a count of 11, while among them was my first 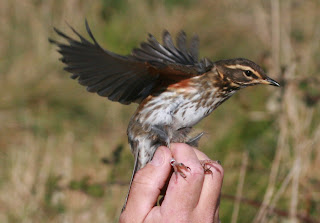 Redwing of the autumn. This photograph was taken last year at the Portland Bird Observatory. 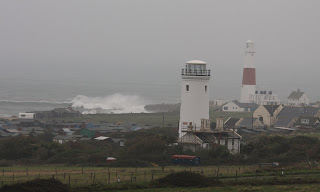 Reaching the crest of the hill at Culverwell, this was the picture and while the waves can and do get far more furious, it has been a while since I've seen this. In the bushes there was another Redwing and a Whitethroat which was an example of those leaving meeting the new (winter) arrivals. The only other 'movement' of note was 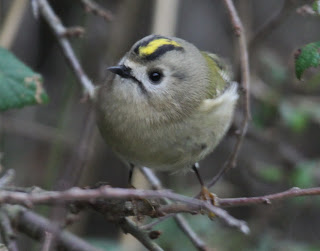 Goldcrest, with c5 at Langley Close, a couple in the Obs garden and 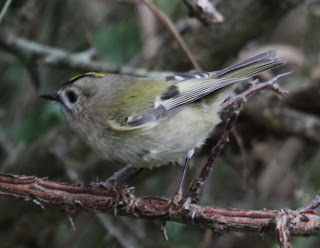 c2, of which this was one, at Top Fields.

While there was a single Knot again at Ferry Bridge, the rest of the day was more about people especially when I bumped into a few of the Hampshire Ornithology Group, what a jolly bunch of people! At the foreshore I had the pleasure of meeting Val McCormack who is the lady credited with proving and photographing the first 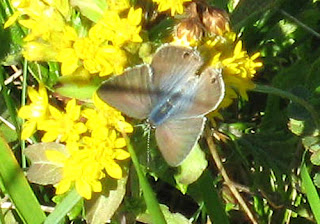 Long-tailed Blue Butterfly for the Island. She has kindly allowed me to reproduce her photograph here, and I thank you Val for the chat this afternoon.
and finally the remaining Storks 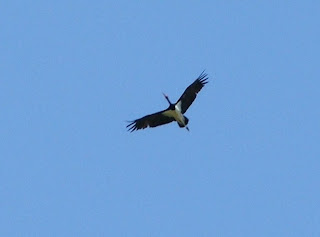 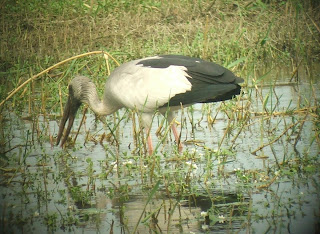 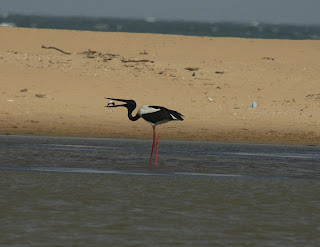 Black-necked Stork seen in both 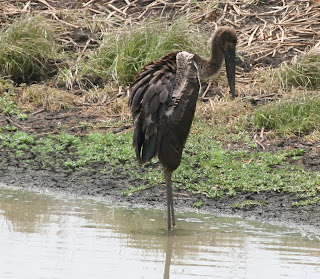 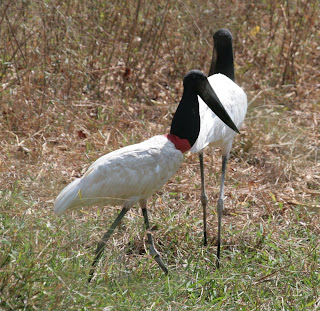 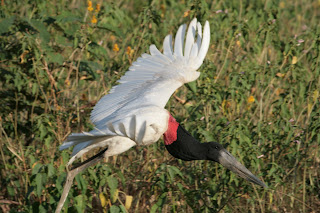 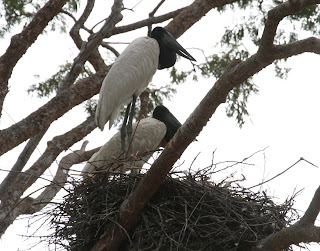