Jackspeak - The Slanguage of the Royal Navy

Despite a rash of roadworks similar to Weymouth I arrived at Wareham spot on time and my old Shipmate John 'Ginger' Prince was there waiting. Only a short walk to their house, there was time for a cup of tea before Val arrived back from her latest shopping exped and after the briefest of hellos Ginge and I sped off in search of the White Stork that has frequented the local water meadows over the past few days. We needn't have hurried as our one hour search of the lanes and fields around East and West Holm was fruitless. This is what it may have looked like! 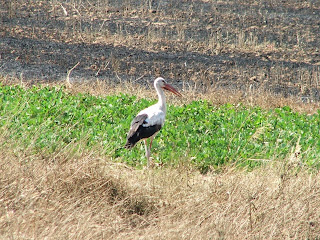 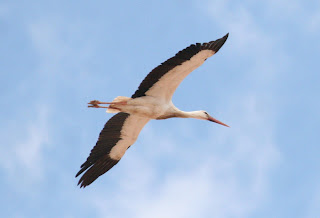 Disappointment was soon dispelled as we arrived home and Ginge immediately 'piped' up spirits deftly producing a part full bottle of original 'Navy neaters' from the back of the grog locker. He had 'acquired' this some 20 years ago and had no need to explain that this only sees the light of day when there is a special guest in the mess! You could smell the stuff immediately he pulled the cork and memories of that noon-day ritual, which finished on 31st August 1970, flooded back.

Next, it was hands to dinner and after an excellent shellfish soup I was agog when Val produced the largest individual 'babies heads' I have ever seen. The RN's colloquial name for steak & kidney suet pudding and these were not only the biggest but the best I've ever eaten, and together with a couple of bottles of excellent wine the 'dits' (sea stories) were flowing, "what about that time in Singars (Singapore) when 'Bungy' Williams caught the etc, etc.

It was 'slack hammocks' all round this morning as none of us got up before 09-00, but with a cup of coffee and a light breakfast Ginge and I headed for the Stork, or lack of it as was the case, before boarding the X53 which was close to one hour late due to the roadworks. 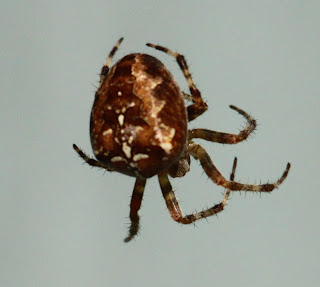 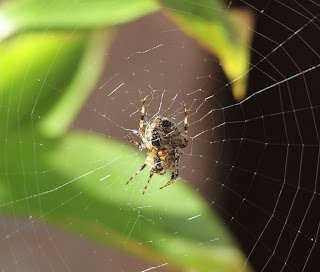 Ginge and Val's garden was full of these this morning. 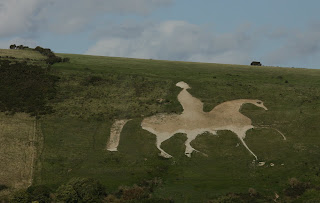 From the bus I took this shot of another Weymouth (or more correctly Osmington Village) landmarks, carved into the hillside to commemorate a visit of King George III. It was during this village that he is reputed to have popularised the pastime of bathing in the sea. There came with it a rather sad legend, but like all such stories it;'s left to the reader to decide if they believe it true or not. Having seen the King arrive, a local shepherd decide to mark the event by etching His Highness atop his horse in the local landscape. At the end of his efforts, he is said to have walked to Weymouth to admire his handy-work. It was only then that he realised he had depicted the Monarch cantering OUT of the town instead of IN and distraught at his mistake he hung himself. It is also said that George III inspired the towns architecture, especially the seafront, and the now familiar seaside resort.

On arrival I once again visited my favourite pub, the JD Wetherspoon house The Swan, for a shoulder of lamb and a glass of wine. The Swan had always been a favourite with RN sailors in the town, but since its conversion the local clientele are something of a close knit family, while holiday makers and other visitors alike return to their own towns with praise for the warm welcome, good food and excellent ale they get from customers and staff alike. My advise if you are visiting our fine town is 'get down there'! 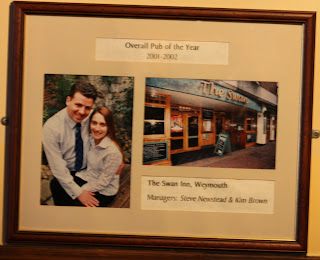 Managers of both The Swan and The William Henry, at the other end of town, Steve Newstead and Kim Brown are now both (award winning) Newsteads with 3 lovely children. Steve's charge the William Henry was formally a Forties Restaurant where during the seasons of 1959 7 60 I worked clearing tables, washing up and ditching the rubbish. With the wages I earned there I would visit the local 'fun fare' which is where I could watch our Royal Naval sailors at play. Most with young women on their arm, many in various stages of intoxication and just one or two testing out their pugilistic skills. It was witnessing these antics that inspired me to join this fine service as I knew I was capable of emulating everything I had witnessed. 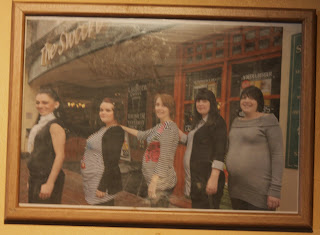 and while I am not privy to what the staff do in their spare time, the picture above shows 5 of them, including Kim center, in varying stages of pregnancy. What I am able to report is that all mothers and offspring are fit and well.
Posted by Bagsy at 17:28