Not Much To Report, But At Least We Got Out Today!

Gone was the rain and wind of yesterday, but it would have been foolhardy to venture far without provision for adverse weather. Overcast with rain bearing clouds, there was already evidence of visible migration before I left home, with Meadow Pipit and Pied Wagtail in good numbers 'calling' as they passed overhead, while Swallows, outnumbering both, flew silently south. With 'road works' being the only topic of conversation hereabouts these days, an early start was planned to avoid the daily delays. With the tide being about as low as it would get today at 07-00 there was always a chance of a decent Wader, but in the event Dunlin and Ringed Plover were all but absent leaving the presumed same 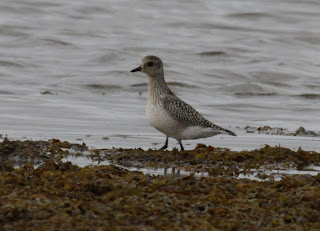 Grey Plover as Thursday, plus c2 Oystercatcher, a single Curlew, c2 Little Egret and by no means common to the Island c9 Rooks. With traffic volume still being low, the red light was delaying what there was and it seemed a long ride to Barleycrates. There a couple of 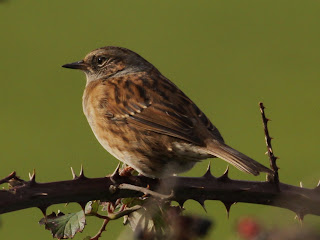 Dunnock were singing from the bushes as 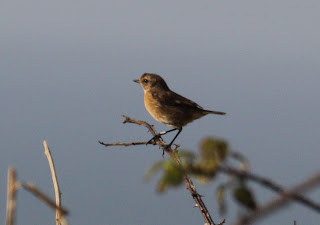 c7 Stonechat preceded me along the path never allowing for a decent shot. 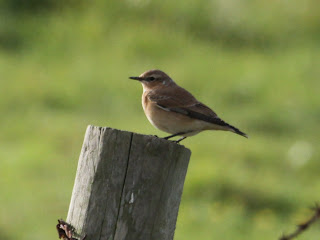 Wheatear, about 2 dozen, were also in evidence as were a number of Red Admiral Butterflies, this 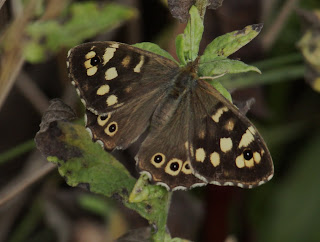 Speckled Wood Butterfly but the most numerous insects by far were recently emerged Crane Flies (Daddy Longlegs). There was (as always) time to stop for a coffee at Fancy's Farm at reap lane, but from there the news is not all good. There are moves afoot to make changes to the tenancy but to go into detail at this time may not be appropriate, maybe I'll be able to reveal more when we are all padlocked to Albion Stone lorries?? Approaching the Observatory I noticed this 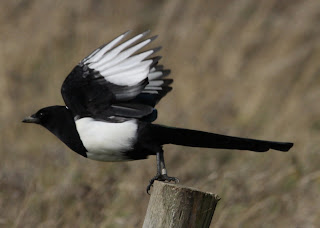 Magpie, complete with ring, (neither being unusual hereabouts) and a recently arrived Nick Hopper. He had enjoyed a much better watch than I with among others both Tree Pipit and Sparrow to his credit. The latter is a good find for Dorset these days let alone the Island, but I did catch up a little on the way home with c2 Tree Pipits flying over the main road. There was also a single 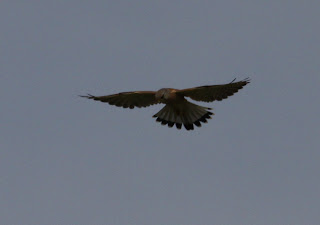 Kestrel hunting the adjacent fields, while a 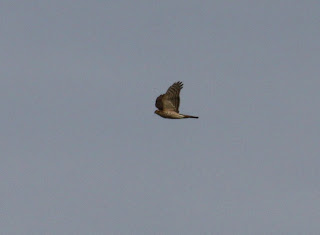 Sparrowhawk seemed to be having little luck, but causing havoc, among a few small birds at Culverwell. OK, not what could be described as a 'classic' birding day, but out in the field for all that and bumping into Ken Parker briefly which is always a bonus.

and finally, a late addition from my dear friend John Wood in Leicester (or Spain or wherever else he may be in the world). Regardless of being Navy, I have always regarded the Royal Air Force as dominant in this discipline - I may have to change my mind.

The US Navy Ceremonial Guard Silent Drill Team was invited to compete in an International Tattoo in Norway in May of 2009. The Navy competed against military units from all over NATO and won first place. I think when you watch this video you'll see why they won.