Back In Familiar Territory

After a first day back of persistent rain and the previous 3 weeks of temperatures constantly in the 90's, it was good to be back on familiar turf on a mild, cloudy day with little in the way of wind. A chorus of Chaffinch, Robin and Goldcrest greeted me within the cemetery, but there being little else it onward to Radipole. Immediately I heard the familiar song which so many times has meant 'welcome home' to me of the Cetti's Warbler closely followed by Water Rail and Bearded Tit in quick succession, all 3 Radipole specialities in as many minutes. Along the loop path Song Thrush, Chiffchaff, Great Crested Grebe, Great Spotted Woodpecker and Kingfisher all went into the log, but there seemed to be a shortfall of wildfowl. That was redress, in part, at the shelter where Tufted Duck and Pochard were present in equal numbers, about 2 dozen each, with teal being represented by just a single pair. Close to the Visitor's Centre c6 Shelduck were busily feeding while there were at least 100 Gulls on the car park but they were exclusively Black-headed. A Common Gull did put in an appearance as I neared the Gurkha restaurant, followed by the surprise of the morning as the Hooded Merganser popped up from nowhere. That was more or less it and as 'high tide' was imminent I thought the best move would be straight to Barleycrates and the Bill. 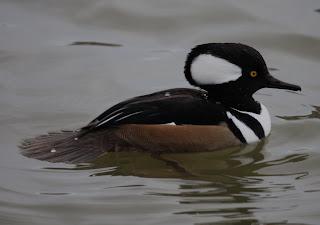 Hooded Merganser has featured through these pages on more than one occasion, 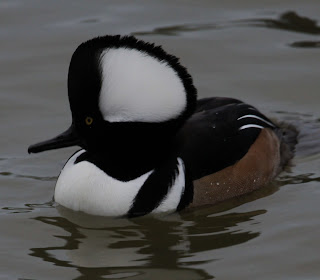 but what a perfect example of wildlife? 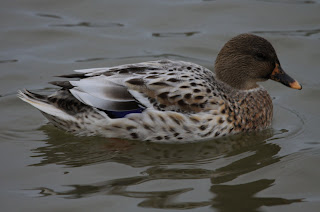 Talking of which, what the hell is this? Is it a Mallwall or a Gadard?

So, despite the state of the tide a quick look ahead from the bus before it arrived at Ferry Bridge I could see a good number of Geese on the foreshore, and got off there to investigate. 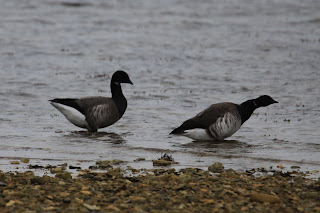 Both Dark-bellied & Pale-bellied Brent Geese were represented but there was no sign of what is becoming a regular Black Brant - maybe tomorrow! There was nothing of note on the walk between Barleycrates Lane and the Bill, but once there good numbers of Chaffinch, Greenfinch and Brambling started to fly overhead. At the Observatory the picture was the same keeping Warden Martin Cade and Peter Morgan busy tending the mist nets. 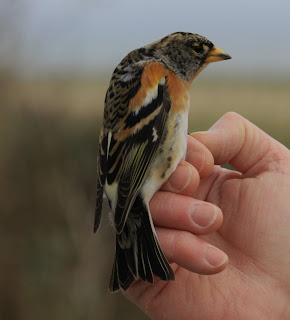 Brambling (male), the northern equivalent of the more familiar Chaffinch. 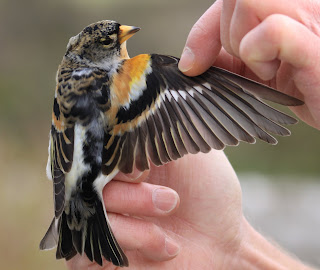 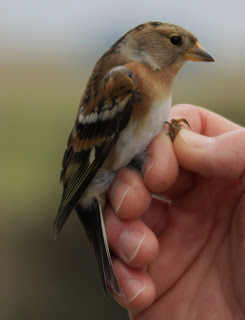 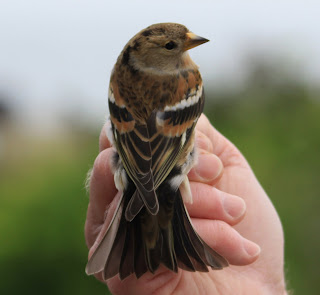 It was worth investigating a reported Grey Phalarope in Chesil Cove, and while it took a full half hour to locate, it was only in view for a matter of seconds.

This footage of a Grey Phalarope was taken in Norfolk some years ago. 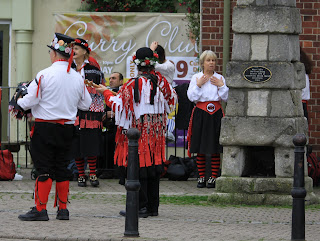 On the way home I encountered these Morris Dancers in Hope Square. 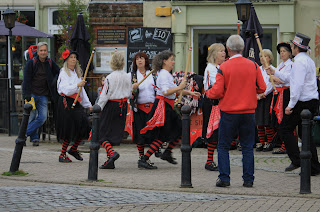 For our overseas readers, this is a form of ancient traditional dance involving smashing sticks of wood together while waving bits of rag and playing dreadful music - comprehendo?
Posted by Bagsy at 18:47