After what seems like just a few short weeks, it's Remembrance Sunday once again. There was a huge temptation to head down the Fleet this morning to search for Black Brant and Whooper Swan but my sense of dedication for my fellow servicemen and women is far too strong. It's a ceremony I have respected in many different parts of the world over the years and under a number of banners which gives me time to reflect on my own service participation and the inspiration that drove me down that path. It came initially from my grandfather Scan of Weymouth (Stanley William Edwards, the Scan stood for Scandalous) who's own service career started at the outbreak of the First World War when he an 2 mates agreed they could best serve King & Country by joining the Royal Navy. The way he told the story was the need for a little Dutch courage, which was taken to excess in the Swan pub (now JD Wetherspoons), and waking next morning with severe hangovers all 3 found they had gone into the wrong recruitment office and were now fully fledged members of the Army. Throughout the conflict he excelled reaching the dizzy heights of Regimental Sergeant Major in command of a detachment of several horse drawn field guns, taking the surrender of several enemy regions for which he was awarded the Military Medal. 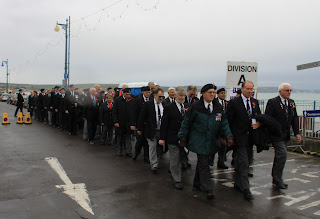 My father, Frederick, on the other hand managed to select the correct force and became a Matelot at the beginning of the second war. Serving initially on the Murmansk Convoys as kids we were familiar with stories of ships being torpedoed on a daily basis and place names such as Benghazi, Trincomalee, Alexandria, Archangel, Calcutta et al were familiar. While serving aboard HMS Coventry he too was torpedoed spending a considerable amount of time in the water and sustaining lasting injuries. His medals amounted to what would be described as a 'chest full'. My mother, Constance (daughter of Scan & Ginny), was also decorated for her services in the Royal Air Force in the Barrage Balloon Division. 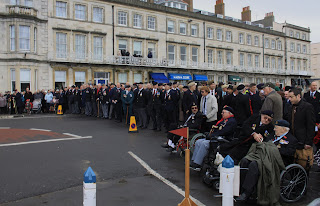 Living in Weymouth and from such ancestry it was more or less a fore gone conclusion that I would end up in the RN where my sea service began on what were referred to as The Cod War. A travesty in my opinion where 'greed' reigned supreme as our country tried to rob a smaller and less powerful nation of their fishing rights, we underestimated them. Iceland fielded 3 gunboats, the Thor, Odin and Prince Albert which in a nutshell out manoeuvred the Royal Navy by much better seamanship, ship handling and overall tactical supremacy. 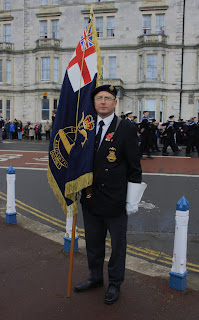 The Standard of the Submariners Association.

From there it was 14 months in the Persian Gulf, Indian Ocean and Gulf of Aden which in the 60's simply spelt trouble all round. Dhow searches for weapons, gold, drugs and other precious commodities was dangerous daily fare, but a cakewalk compared to the pull out of Aden. Their I spend an unforced, short detachment in the Radfan with the Parachute Regiment, SAS & SBS it was my only first hand experience of real war and can empathise with what our lads and lasses have to contend with in the likes of Afghanistan, 6 years in the Submarine Service became light relief. Today has been yet another opportunity to reflect on the few personal mates who 'fell by the wayside', those who have served, still do so and those to come - why not Give Peace A Chance? 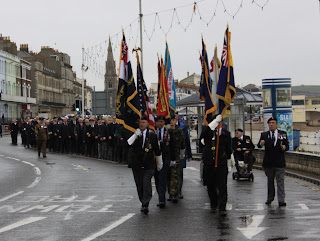 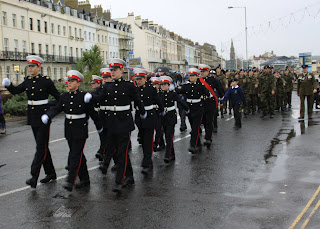 Services marching past the cenotaph. 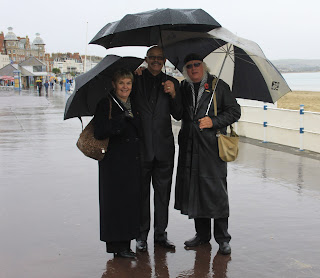 As predicted I hooked up with Sooty & Gill Stockley for an after the parade drink. 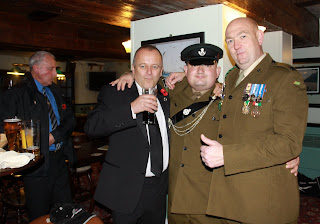 There was plenty on offer after the event, and at the New Inn, Littlemoor the Army were holding court. 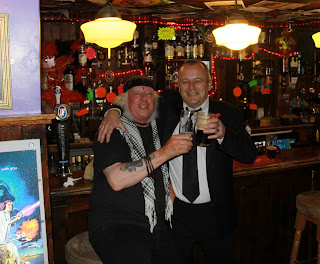 At Finn's my dear friend Ian Jenkins and I managed to catch up on a long outstanding drink.
Posted by Bagsy at 09:39