Cool For Cats (and Birders) - Squeeze

To start today, a correction to yesterday's post is in order, as I labelled a fairly obvious Cormorant as a Shag and have to thank the Dorset County Bird Recorder, Kevin Lane, for pointing this out. I am always happy to receive such corrections or other comments for that matter so long as they are constructive - thanks Kevin!

As yesterday, I was met at the cemetery gate by the 'local' Common Buzzard but content today simply to fly over. Within, judging by the quantity of bird-song, the small bird community seem to be doing OK despite the harsh weather. Again, the ground was shrouded with a sprinkle of white, this time frost, much more of the water in various places seemed to be frozen but the sun continues to shine in an all but clear sky. 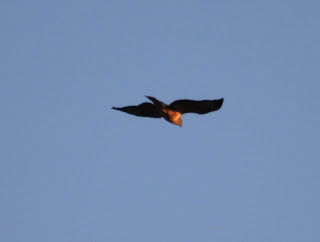 Along with more extensive frozen water, both Buddleia Lagoon and the main lake from north of the Visitor's Centre through to Westham Bridge were solid, it seemed that Wildfowl numbers had increased. I discussed this with RSPB Warden Luke Phillips who suggested numbers were about the same only the harsher weather had forced most of the Ducks into less open water. Either way, it was much the same there as previous days with both Cetti's Warbler and Water Rail being most vocal, Pochard and Tufted Duck being most numerous, while single Chiffchaff, Reed Bunting and Hooded Merganser added that bit of extra interest. 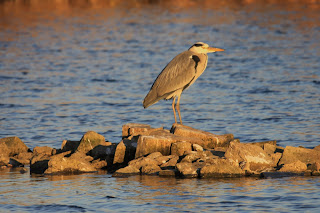 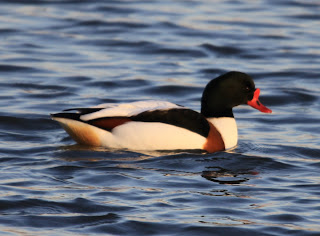 Shelduck, both ever present, the latter now numbering over 40 individuals but the best was to come. I walked with Luke to the car park, where a phone call from Daragh alerted us to a Great White Egret on Lodmoor. At the same time as nailing my sprinting blocks in Luke shouted 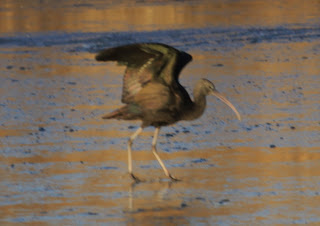 Glossy Ibis on the ice. Quickly checking it out followed by a rapid burst of Canon (camera) fire I 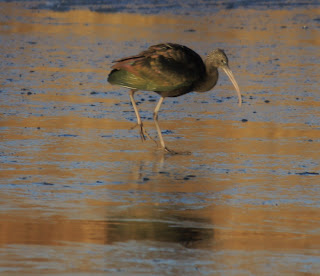 then returned the call to let Daragh know. All a little too late I fear as the bird 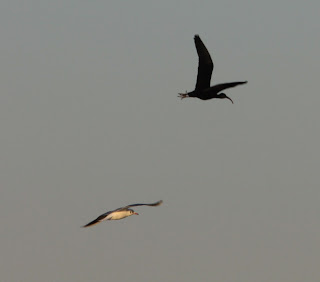 took to the wing and headed off to the north. It did appear to loose altitude above the north pool, still on the reserve, but I was only prepared to wait long enough to get a few shots in silhouette. A welcome addition to the year list, the Glossy Ibis is becoming a more frequent visitor (or resident) to Great Britain but of the very few I have seen in Dorset (the first in 1977 when it was considered a 'great rarity') September is the only month they have shown for me.

My arrival on the sea-front coincided perfectly with an east bound number 4B bus which dropped me just 100 yards from the Lodmoor entrance, even a taxi wouldn't have got me there quicker. Unfortunately, this stroke of luck was all in vane as a second call from Daragh informed me of the GW Egrets departure just one minute before. Have I said 'B*s*a*ds' today? However, there was still plenty to see on the moor with a good number of 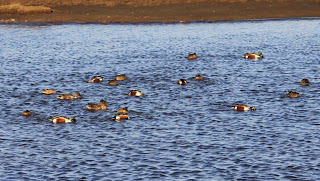 Shoveler feeding close to Edward's Folly (the viewing shelter built by Lorne/Bowie Edwards, the twin structure at Radipole being Slater's Folly as Martin Slater was the Warden there at time of construction) 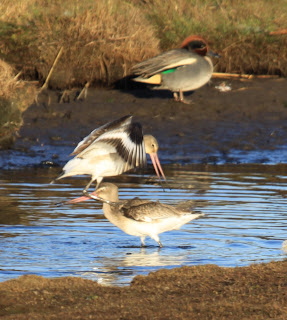 2 of the c9 Black-tailed Godwits having a scrap,

while a third mingled peaceably with the Teal. 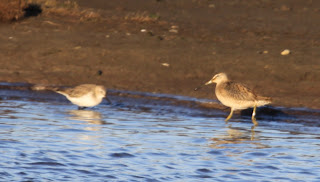 The Long-billed Dowitcher (left), seen here with a Dunlin for comparison, is still in attendance and very good value. 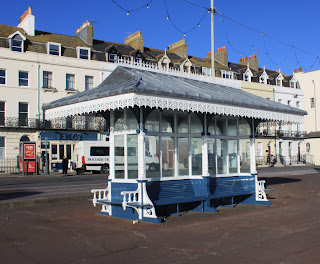 Walking back along the promenade, it was great to see the refurbished Victorian shelters back out of 'moth balls' and gleaming in the bright sunlight. I'm not even going to mention 'dropouts' and 'litter / graffiti louts'! Whoops.

It was a bracing walk to Ferrybridge, warm in the lee of the built up area but bitterly cold when exposed to the north easterly wind, even though it was barely raising the wind-sock. However, the sight of presumably the same c3 female Goosander as yesterday soon drew my attention elsewhere, as did a distant juvenile Little Gull flying south along the Fleet. This was followed just a few moments later by a slightly 'oiled' adult Kittiwake, neither of which are frequent here, both disappearing over the Chesil Beach into West Bay. These 2 Gulls increased the tally of 5 here yesterday to 7 today, while a little further along the sea wall this small group of mainly 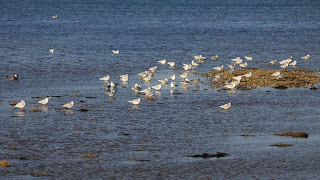 Mediterranean Gulls also included a few Black-headed and Common Gulls. All else of note were c13 Little Egret, c5 Little Grebe, about 2 dozen Red-breasted Merganser and the usual combination of Dunlin, Ringed Plover and Turnstone.

Finally, I'd like to welcome as our 111th country / region to the readership, Armenia, a country I knew very little about up until last night when it appeared on the screen. Since then I have checked it out via various websites and added it to my 'Must Visit List' which is still extensive -