You Can Tell It's Pantomime Season

because every thing's On Ice!

It would be unusual to record Common Buzzard 3 days on the trot in, or over, the cemetery so it was no surprise I didn't see it / one there this morning. However, with little else to report from that site it wasn't long before one was seen alighting on the western path of the Buddleia Loop at Radipole , seemingly recovering an item of carrion. With an even harsher frost last night, accompanied by clear skies filled into the early hour by calling Redwings, it was also obvious the lake would be even more frozen today. 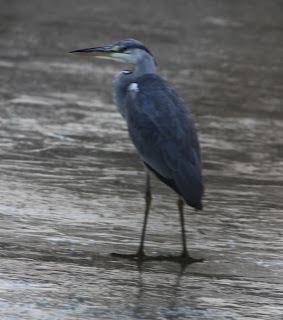 At the north end, this gangling Grey Heron was stood where there might usually be up to 4 feet of water, 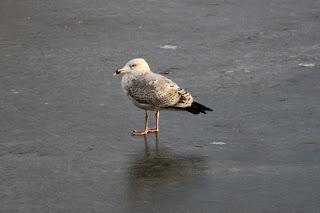 while to the south and right up to Westham Bridge the ice formed a platform for all of the Gulls plus other birds. It's worth mentioning that, as usual, Joe Public is there once again, 'mob handed' feeding all of these hungry creatures - Well Done! 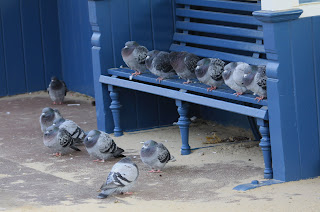 It also didn't take long for my prediction of yesterday to be realised. As I though, it wouldn't be long before someone took advantage of a 'free bed' in the newly painted seafront shelters (Feral Pigeons).

With the Moon at half phase, top of the tide would be around mid-day so it was always going to be worth a stop at Ferrybridge on my way to the Bill. Talk about speaking too soon, it was dead except for just c2 female Goosander and a much reduced group of small Waders, but there was something caught my eye close to the 'high water mark'. 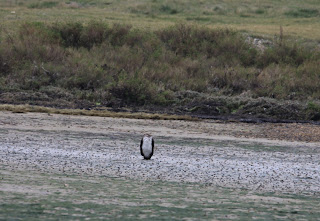 What appeared to be a roosting Cormorant, in the most unlikely of locations, 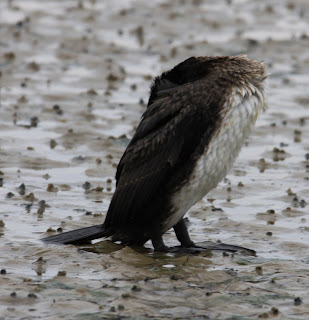 These 'diving birds' do hunt in the shallows here at the right state of the tide, but to find one perched so far up the beach is strange to say the least. 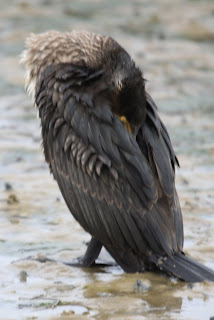 I was able to approach to within touching distance, where I could see its 'eye shield' flicking, but there was undoubtedly something wrong as it didn't even raise its head. It was also of note that Radipole was considered 'balmy' by comparison to where I now stood, exposed to only a breeze, but biting for all that! 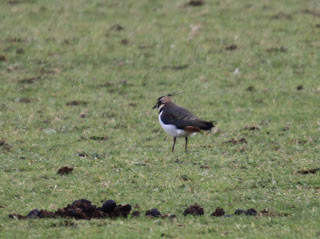 Greeted at Sweethill by a small flock of flying Lapwing, it wasn't long before more were encountered on the Bill fields. 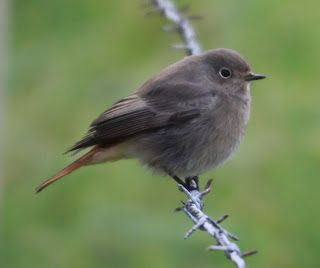 A little further south, past Sweethill Farm, this Black Redstart seemed content feeding on small insects close to a water trough, while this 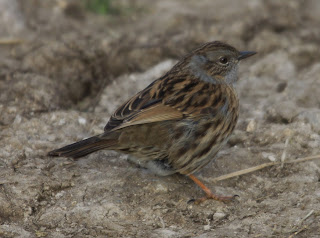 Dunnock was finding sustenance at the edges of the cart track. Unfortunately, I was a little too slow to capture an image of a pristine male Stonechat close by. At the Observatory things had been fairly quite during the morning, but my Lapwing total increased to c17, a Grey Heron was behaving a little strangely at Reedy Ditch as a variety of Tits and Finches fed in the garden on seed and apples provided by the Warden. Given the recent outbreak of a killer virus it was pleasing to see so many Greenfinch both in the Obs garden and the fields across the road, courtesy of Richard Newton. The afore mentioned apples were, in part, a lure for one or both of the female Blackcap seen feeding earlier in the day, but that was not to be! Coffee and corned beef bun consumed it was time to head for home and on the way came across this 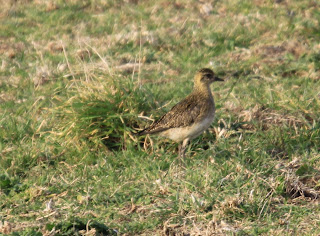 Golden Plover in a nearby field. 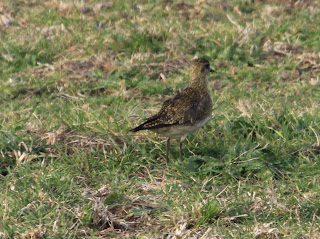 Bowie and I did see about 2 dozen at Warmwell roundabout on Sunday, but in flight there was never a chance of photographing them. 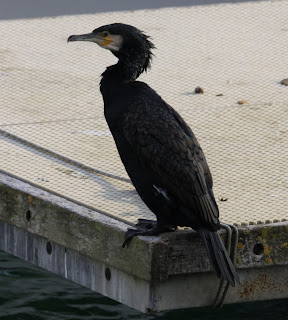 Walking Weymouth's inner harbour side, this Cormorant looked a whole lot healthier than the one previous, and needing the ID practice it was best just to 'snap' away.

and finally, it's about this time of year that the promenade between Greenhill and Weymouth becomes strewn with the 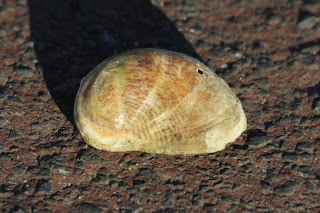 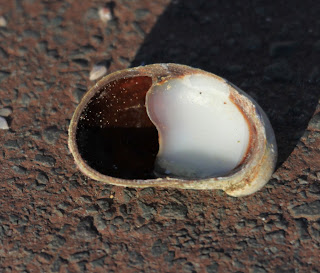 Alien to our seaways, they are said to have arrived originally on the hulls of ships from the United States during World War II. Carried by Gulls and 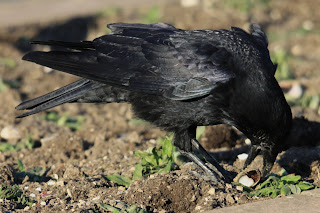 Carrion Crows from the beach, I spent a little time studying just what these birds gain from the seemingly empty shells and was reminded of a similar encounter with opportunist aves some years ago. In the 90's my youngest daughter Lisa and I embarked on what turned out to be a magical overland journey from New York to San Francisco, taking in some of Canada and Mexico on the way. At our destination, I was bent on enjoying the 'hippy' culture while Lisa had food on her mind. Fortunately, Fisherman's Wharf on Frisco's Bay Coast caters for both where we ordered huge portions of Shrimp. Discarding the shells after removing what we thought was all of the meat, we found Common Starlings (imported from GB) had devised a technique of prising the remaining morsel from the extreme tail-end.

This appears to be what our own birds do here. In the absence of 'live' shells, which they take aloft and drop from a great height, the Crow in the picture can be seen teasing out that final bit of flesh from within.

The down side to this story is that what may be rewarding for the birds may not be so good for the rest of the wildlife of Weymouth (and elsewhere) as the imported Limpets immediately started to decimate the other Mollusc populations, not least the highly prized Atlantic Scallop. 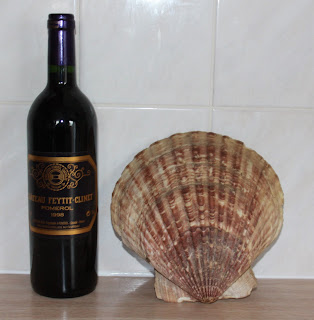 This is the second largest Scallop I have ever seen (and have to say eaten) given the size comparison to a 75cl wine bottle, and until shown differently consider it the 'Mother' of all Scallops. 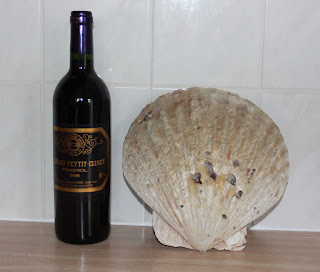 This then, a full quarter size bigger, must be the 'Father' of all Scallops. The reason for showing these is to highlight the damage done by the Slipper Limpet, which literally 'drills' its way through the shell, no matter how thick, to attack the flesh. 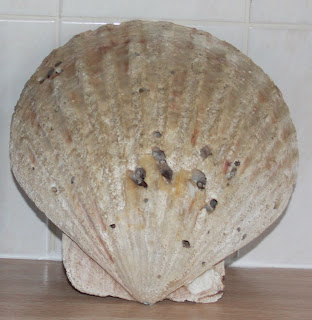 An enlarged image shows the holes made by the Limpets, which were still drilling when these were caught, over time these thinner shells have disintegrated and fallen out of the drill holes.
These scallops were caught while engaged in diving operations off Masirah Island in the Gulf of Oman in 1976, just half of one was enough for a 'starter' - bon appetite!
Posted by Bagsy at 17:33