The Sun Is Shining the Weather Is Sweet - Finley Quaye

Another sparkling day similar to yesterday except the wind had dropped to zero giving the impression of a warmer day, but the ice still on the watercourses at both Radipole and Lodmoor told the real story. However, it could have been blowing a houlie and pouring with rain to deter me from the object of my desire today. 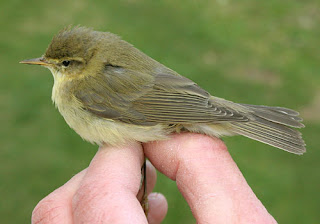 The Willow Warbler could be described as nondescript but to have one stay over in this country on this date is unusual to say the least. In the words of PBO Warden Martin Cade "it is presumably attempting to overwinter; and been lurking very unobtrusively in the crops in the Crown Estate Field since it was first trapped and ringed on 26th September - virtually all the reports of it since then have been on the odd occasions it's turned up again in a mist-net. If it gets through the current cold snap then it'll soon be the latest Portland record: the latest record we could find in a quick flick through some old reports was of one at Pennsylvania Castle on 27th
November 1996.

So, the reader, especially those of you who understand the psyche of the avid birder, could understand the importance of seeing such a bird this late - but given the terrain this would make a needle in a haystack a piece of cake! As I turned the key on the front door a phone call from Daragh changed all of this setting me off on a completely different tack in pursuit of c12 Goosander again returned to Weymouth bay at Greenhill.

I spotted the c12 female Goosander at a distance of about half a mile from Weymouth beach, but on closer approach I also noticed a dog walker advancing from the opposite direction. Although I beat him to the ducks position, the dog had already done the damage flushing the birds to safer water and into the sun. 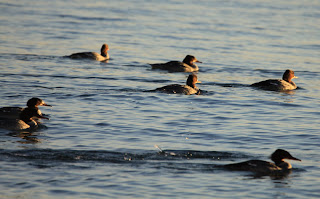 There was a chance for a few fairly poor photographs 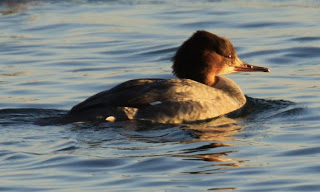 and with a little enhancement they were just about fit to publish. Meeting up with Daragh after this I was again diverted from the Willow Warbler, but hey I doubt it was going to move far. We wandered around the moor together stopping off to look at a Red-throated Diver and c18 Great Crested Grebes again in Wey Bay. 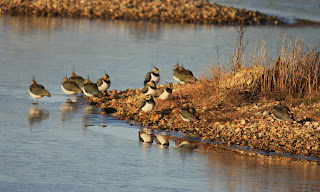 Lapwing numbers seem to be increasing on the moor, as are those of Blackbird and Song Thrush, but quality is still assured by the presence of the Long-billed Dowitcher, plus c3 Dunlin and this 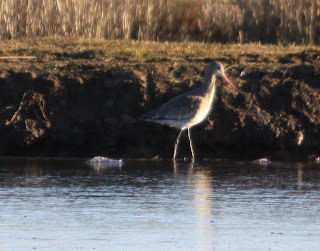 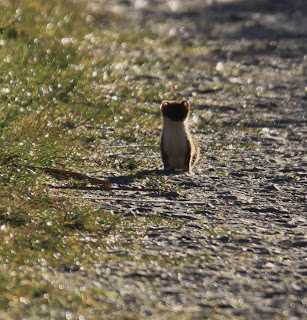 The surprise of the day was this Stoat appeared only briefly 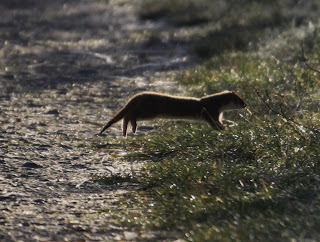 but long enough for these distant shots. Finally here there was a little mirth provided by 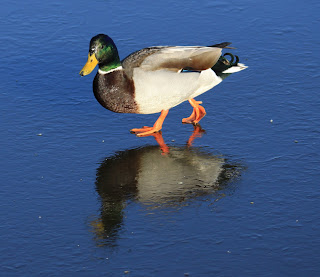 Mallard landing on the ice and skidding uncontrollably across the surface. I dubbed this 'the Jesus Duck' as it appears to be walking on water. However, I could now return my attention to the matter in hand, and head poste haste to Portland, except arriving at the King's Statue by bus a fellow passenger pointed out some Swans in the bay. 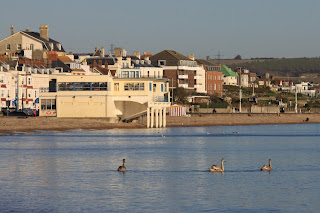 Recording Mute Swan in Weymouth Bay is by no means a daily occurrence, so these c3 juveniles were on interest paddling around the Pier Bandstand area.

It was also ironic that the c12 Goosander had seemingly followed me from Greenhill but were even further away than before. 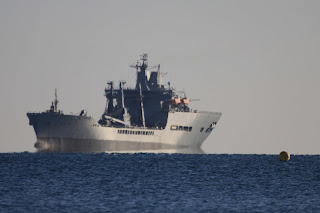 While trying to decipher the name on the bow of this Royal Fleet Auxiliary vessel, I was approached by a couple of passers-by wanting to know both about the birds and the ship. Unfortunately for the gentleman with the small white dog, I have been unable to read the name via the photograph or find anything revealing on the net, I will follow this up and publish the name when I have it. As for the Singaporean lady and her husband, they seemed to get best value out of the Goosanders and as they told me they are just starting out as 'birders' I wish them well, especially if you do try for the Whooper swans on the Fleet - I could see you there tomorrow. 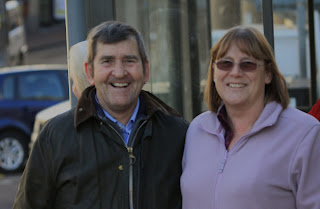 Finally pulling myself away, I awaited the next bus to Portland on the Town Bridge only to bump into former 'shipmate' Martin Powell and his wife Mandy. It had been too long as they moved to Scotland some years ago. As I said this morning, it was fantastic to see you, and it stimulated me to visit our mutual friend Gary White on my way through Southwell village. Gary and I shared some fantastic 'runs ashore' together and had it not been for the now impatient Willow Warbler I think I'd still be at his house.
Finally, I did get to the Observatory and more importantly the Crown Estate Field opposite where I feel I saw the Warbler in question? On the 'balance of probabilities', to see such a small, nondescript bird immediately on arrival, and with very similar and not at all unusual Chiffchaffs there as well has sown a seed of doubt. I'll just have to wait for the addition of this species to the November List, but there were single Stonechat, Dartford Warbler, Brambling and Reed Bunting by way of consolation.
Posted by Bagsy at 19:12