With the potential of a few good things in the area this morning it was a bit of a quandary as to which direction would be best, but an early call from Daragh had me heading for Radipole Park Drive (RPD). Having already recorded many singing birds in the cemetery, in complete contrast to yesterday, and a Common Buzzard overhead at Radipole it was good to find the 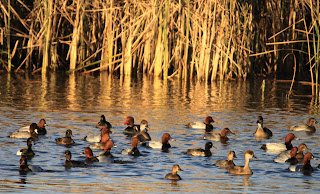 Red-crested Pochard (R-c P) among a large number of other wildfowl opposite the tennis courts at RPD. Also in attendance were Mallard, Gadwall, Teal, Shoveler. Tufted Duck and something of a surprise 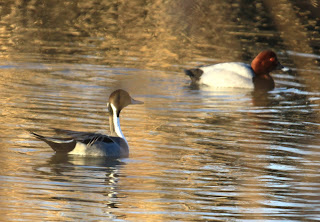 this Pintail (along with many dozens of Pochard) a really elegant bird that visits the lake all too infrequently. It was just as I was getting in range when 2 other visitors arrived in the shape of a (the) Common Buzzard and a Sparrowhawk that cut along the line of reeds at breakneck speed. This had the effect of putting about 80% of the Ducks to flight, leaving only the brave or foolhardy, 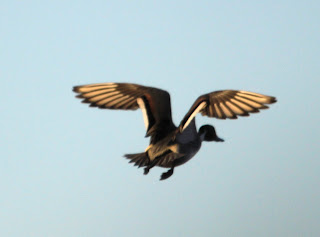 including the Pintail and the R-cP. However, it wasn't long before most were back but unfortunately not the Pintail. 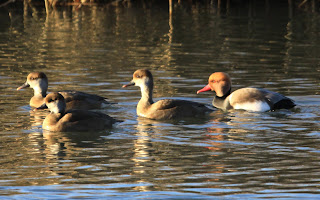 The initial report had been of just c2 R-cP but once the flock had settled there were seen to be c4, 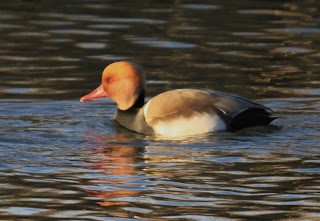 a single male plus 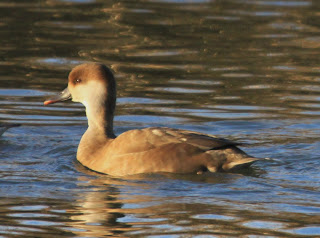 c3 females. Before leaving the area, I checked out a familiar call coming from one of the large fir trees to find a Firecrest, which was not obliging enough to allow a photograph.

There had been a tentative plan to take a walk along part of The Fleet, a body of water that lies between the shingle bank of Chesil Beach and the mainland west of Weymouth, but there had also been another call from Daragh alerting me to c4 Woodlarks north of Lodmoor. Coincidentally, this was at the same time that the Chickerell bus arrived so taking this as an omen, it was the Fleet. A short walk from Chickerell Village is the old 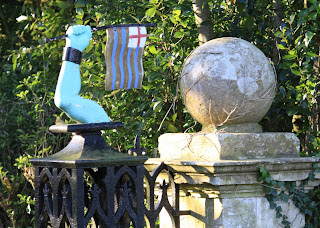 Gateway to Fleet Road, and while I have no idea of the origin of the 'flag waving hands' on the wrought iron gateposts, think they look both ancient and novel. In turn the road leads to 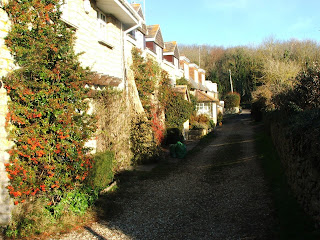 and it's row of quaint cottages, and as if to add a little more drama a 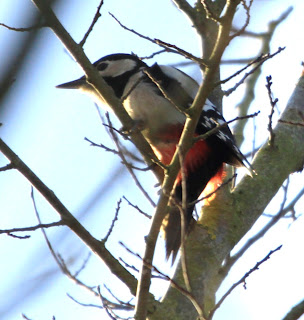 Great Spotted Woodpecker landed, albeit briefly, in a nearby tree. 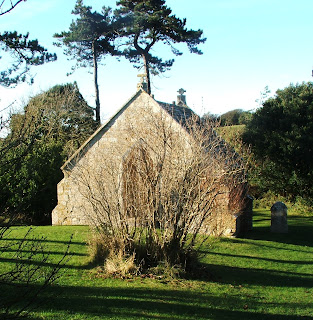 This is also the location, as regular readers may remember, of Moonfleet Church which features in the novel (and film) of the same name. Those wishing to read and see more of this fascinating place might like to use the 'search engine', on the Home Page and type in '12 June 2010' or 'Yesterday Once More' on this Blog to access the relevant page.

From here, you meet the Fleet at 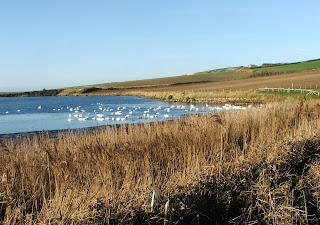 Butter Street Cove where Mute Swans are ever present, the world famous Abbotsbury Swannery being only a mile or two to the west. Walking east you immediately gain the advantage of high ground to view a wide expanse of 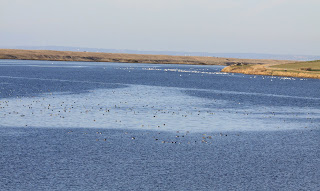 the 'watercourse' with Chesil Beach in the background and the Dorset Coast stretching to the west as far as Golden Cap, the highest point on the south coast of England. Also viewable from here are just some of the 'thousands' of wildfowl which thrive on the Fleet during the winter months. 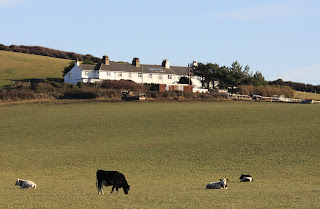 Heading east, East Fleet Coast-Guard Cottages soon hove into view, as can on a day like today:- 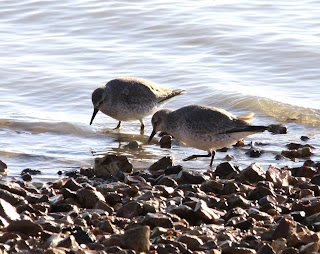 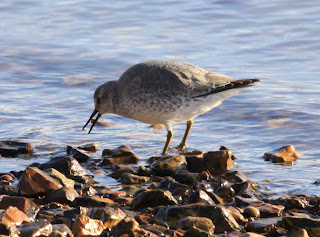 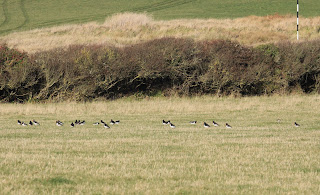 Some of the c31 Oystercatcher that were feeding in fields close by, and on closer inspection you should be able to see a single Black-tailed Godwit (honest) second from right! 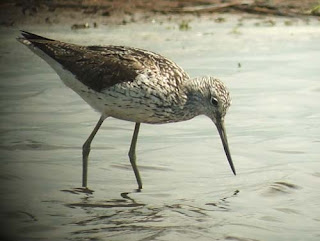 In addition a Greenshank plus at least c4 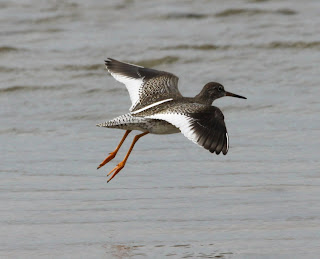 Redshank appeared, the photos, for illustration purposes, are from the archive. As I made my way up the Tidmoor path to Charlestown, a 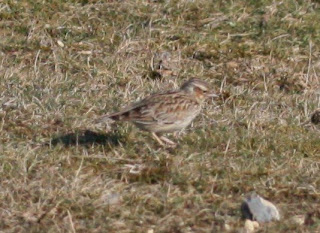 Woodlark landed on the track just ahead 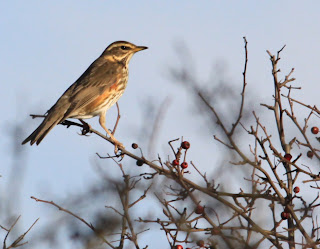 and the hedgerows suddenly became alive with Redwing.

It was only on arrival at home when it dawned on me just how 'over dressed' I had been today, hot as a freshly baked loaf I looked in the mirror to notice the 'plimsoll line' the sun had left across my forehead where my hat had been. In conclusion of this walk and the area, which I don't wander half as often as I should, it is plainly apparent why the likes of Brett Spencer, Ian Dodd et al love this place so much.
Finally, this run of photographs were sent to me a couple of days ago from my friend and Chief Engineer of the Technip 'deepwater pipelay vessel' Deep Constructor just off the coast of Recife, Brazil as they commenced their passage back to UK. They are said to be from the Cingino Dam, Italy and if authentic, are little short of amazing. 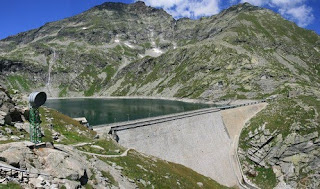 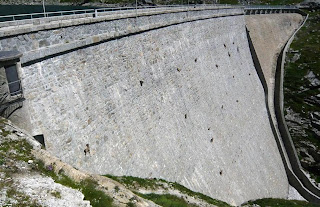 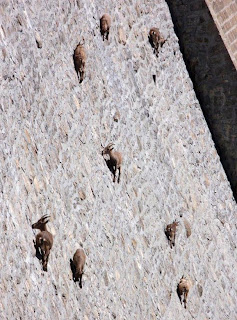 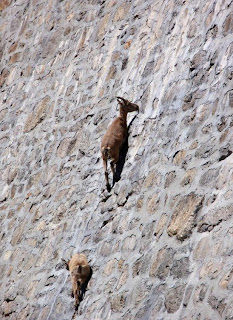 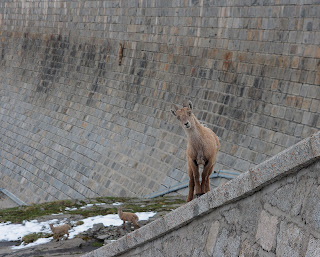 It is reported McDonald's intend building an outlet on the face of the dam wall in early 2011?
Posted by Bagsy at 18:23