'Imagine' ALL the people living life in peace?

It was 30 years ago today that John Lennon was savagely gunned down in 'cold blood' in a New York street - it's impossible to kill a LEGEND! 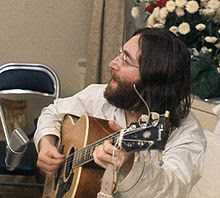 R.I.P.
and while on the subject of music and musicians, for those who asked, the track on the Common Crane footage in yesterday's post is 'How Soon Is Now' (by, as the video credits tell, The Smiths). The riff was written by the band's guitarist Johnny Marr who is quoted as saying:- "I wanted to write a riff that was almost as potent as 'Layla' (Derek and the Dominoes [Eric Clapton re-incarnate]). When it plays in a club or a pub, everyone knows what it is." It is unarguably that, and has even been voted 'Best Riff Ever Written'! As a 'rider' the lyric was written by Smiths front-man Morrissey, and is an (the) anthem to 'shyness'. 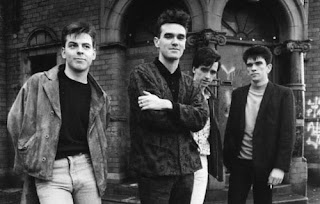 There was a deathly silence met me at the cemetery this morning as there was barely a bird to be heard and gone were all the Thrushes along with yesterday's freezing fog and biting wind. Wood Pigeons were the only birds in numbers, and even though there was a slightly more pleasant feel to the morning 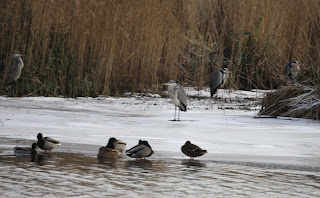 looking across Radipole Lake, to a few Mallard & Grey Heron, it was still a wintry scene. Here, Shelduck were once again numerous but other wildfowl numbers also seemed to be much reduced. From the reeds and sedge Cetti's Warbers were again vocal after an absence of a few days, and similarly 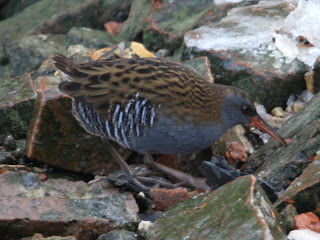 Water Rail were uttering their distinctive 'piglet squeals', with this one posing for a photo call. 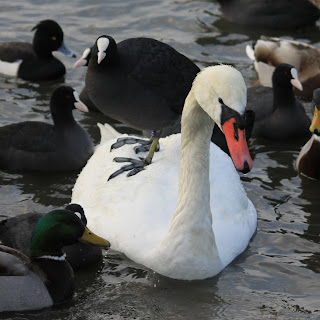 Talking of which, how about this for a pose? I'd like to add the caption " where's the slot for the money Dad, so I can get this thing going", but won't!

Arriving at Ferrybridge, I started eating my words reference the wind - it was cutting - but there were a few birds starting with a single Mallard flying into the harbour. A minor detour confirmed the c2 distant 'saw-bill ducks' to be 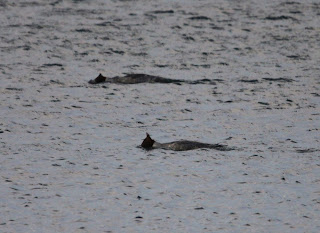 female Goosander carrying this strange ' face in the sea' manoeuvre, which makes me wonder whether they are 'surface feeding' or just searching for food? There were also good numbers of close relative Red-breasted Merganser, c5 Little Grebe and new arrivals c2 Great Crested Grebe. 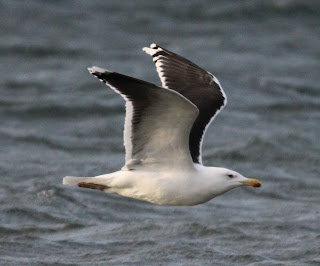 This Great Black-backed Gull looked such a good subject 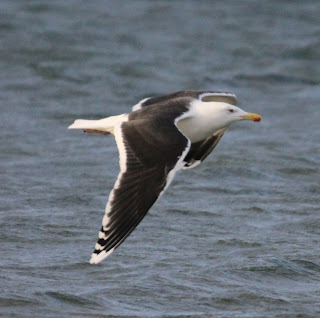 I couldn't resist shooting. Brent Goose numbers were much reduced today, 500 was the estimate, while I broke my personal count for Mediterranean Gulls at 258, which is small beer compared to some counts by others of 'many hundreds'. 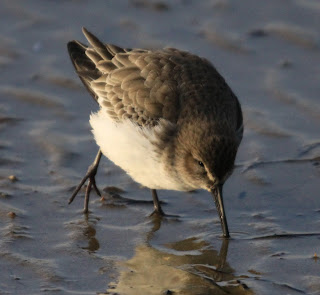 Dunlin numbers were about the same as recent days, with single Curlew and Knot among them, otherwise a very pale Common Buzzard put in a brief appearance before being chased off by a Raven.

and so, on to the Bill were on the way this 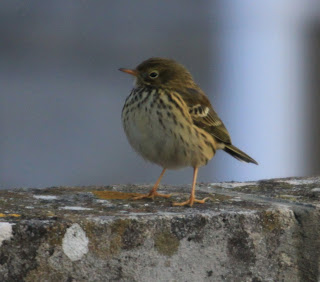 Meadow Pipit perched on a garden wall, while at the Obs feeding station a 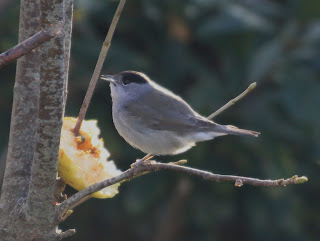 male Blackcap (one of 3 birds on site) put in a timely appearance. However, there was more pressing business as lunch, with Warden Martin Cade and Edwin Welland awaited at the Pulpit Public House where it's always good to be in the company of mine host Danny Fox. 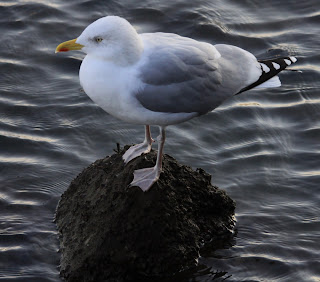 At the Inner Harbour, Weymouth this Herring Gull also presented a photo chance, so here it is.

Last night I watched just part of a programme that drove me straight to the photo archive, allowing reminiscences of a fantastic tour during the autumn of 2008 through China. Part of that trip was a visit to Sichuan Provence and the 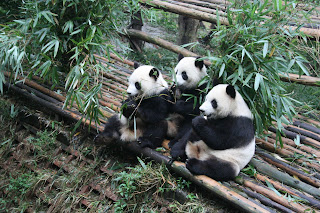 Giant Panda breeding centre in Chengdu, which was the subject of the programme. 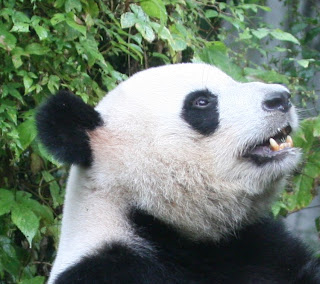 I can well do without 'caged animals', but this unit certainly serves a function and is now returning some animals to the wild. That is not all the project covers however, as the equally rare 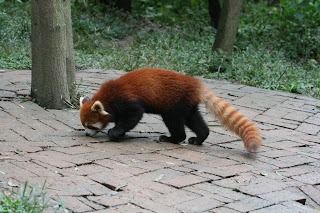 Red Panda (or Shining Cat) is also bred there, 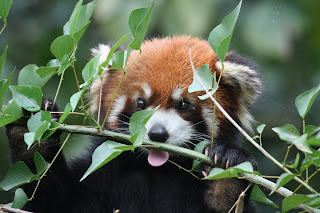 and repatriated to its natural habitat. 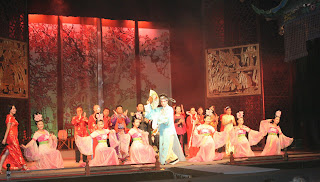 Theatre too play a huge part in Chengdu (Chinese) society 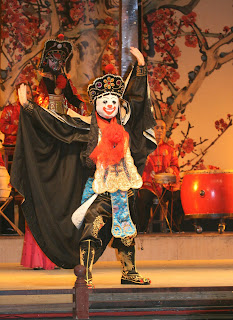 with most popular among the many acts are the 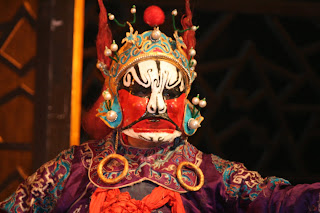 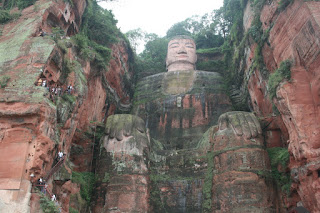 Close by, and still in Sichuan Provence, at the confluence of the Minjiang, Dadu and Qingyi rivers, at Leshan, stands the Grand Buddah Statue, built during the Tang Dynasty 618 - 907AD.
Maybe of interest, a few days later on the Lijiang River in Guilin Provence we encountered the 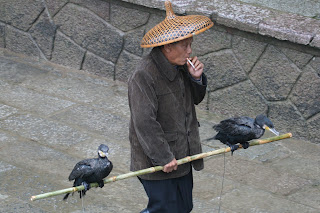 Cormorant Man preparing his birds for the day's work. They do say that people who keep animals for long enough eventually start to look like them (circa Princess Anne). 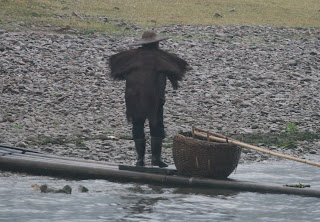 Later in the day, seen unloading his catch, what do you think? Is this not Chiang Kai-shag?
and his brother
Chiang Kai-shek
蔣中正 / 蔣介石 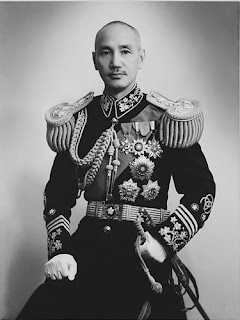 1st & 3rd Chairman of the Nationalist Government of China
Posted by Bagsy at 17:33