From A Distance - Cliff Richard

What better way, or what better place to spend another sparkling, sunny day than wandering back to the Fleet. Forsaking both the cemetery and Radipole, it was directly to the X53 bus and a driver who kindly dropped me off at Langton Herring village. Those readers wishing to see some photographs of this quaint Dorset hamlet should return, via the search engine, to 6th June 2010 on this Blog.
Historically, I have always found this place full of birds (and other wildlife) and while a little short on rarity value most are species that I don't encounter on a daily basis. Today wasn't to be an exception, the only down side, if you wished to describe it as such, that just about everything was at a great distance. I had considered taking my telescope and tripod today, but moments before leaving home came to the realisation that such a weight over such a distance would be prohibitive.
Of no surprise the first candidate to enter the book was a noisy 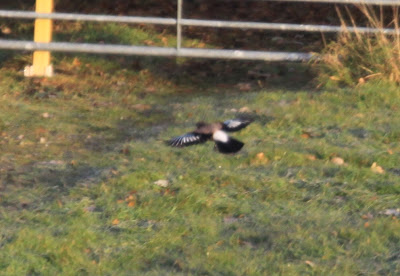 Jay that even at a mile away flushed to cover at my approach. I still haven't been able to secure an image of this nervous species worthy of archive status, but every reason to keep trying. Next up, and betrayed by its 'calling', a 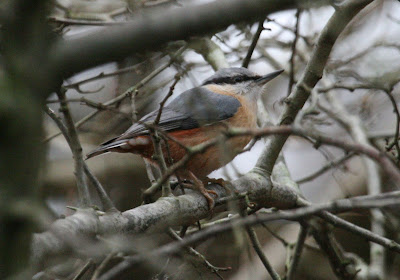 Nuthatch was busily foraging between bouts of song, but far too distant to get a shot so back to the archive for illustration. 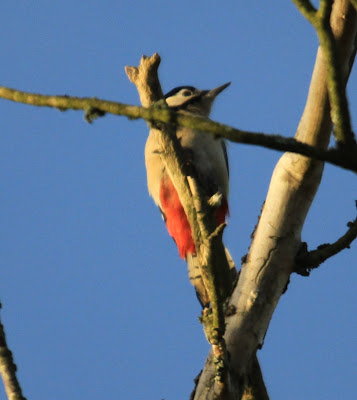 Great Spotted Woodpecker was next with a 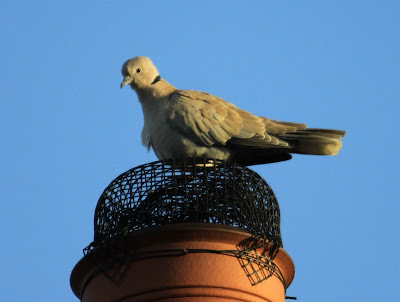 Collared Dove not too far behind and 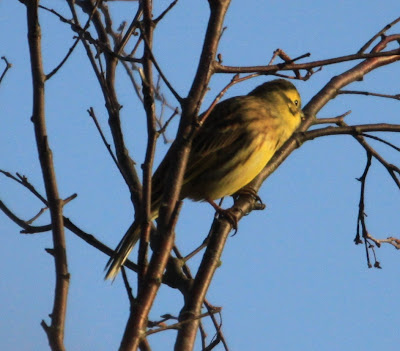 Yellowhammer, represented by c4 individuals both 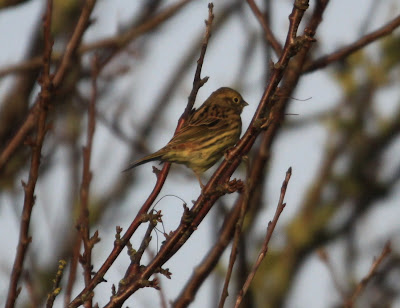 male and female were seen in the garden of the last house before the bridleway opens up. 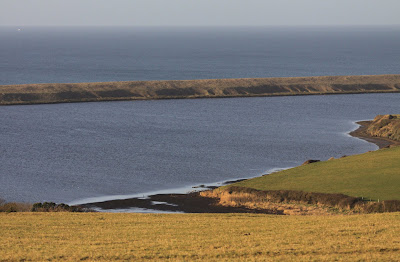 Rodden Hive, the inlet seen more or less in the foreground, was my next destination by which time a couple of dozen Pheasants had been seen, c3 feeding Mistle Thrushes, a throng of Goldfinch plus several blackbirds and Song Thrushes had also been logged.

My next encounter was with fellow birder and friend Paul Harris who had already been watching the area for a while, and was able to point out immediately 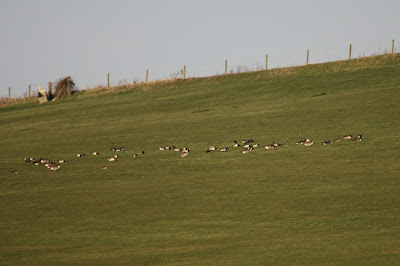 a 'gaggle' of mixed Geese feeding on a grassy hillside. These consisted mostly of the local Canada Geese, but of much more interest were the (my) c37 Barnacle Geese intermingling. It was a good job Paul had his 'scope as they would just have appeared as small dots to me, just like the photo! 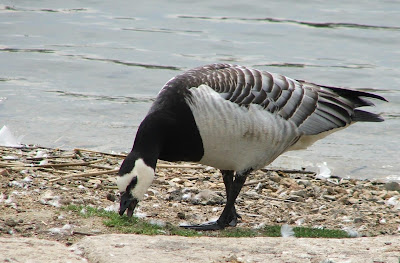 So here, to show what one looks like close up, a an archive shot. While we were together we marvelled at the splendid colours of the various Duck, as we watched a few dozen Common Gulls arrive and c3 Mediterranean Gulls close behind. 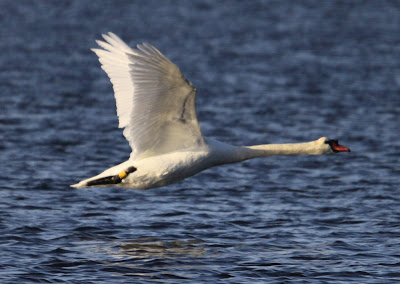 Parting company, me to the east and Paul back up the hill to the village, I watched several Mute Swans flying by, most striking in flight, and soon encountered this 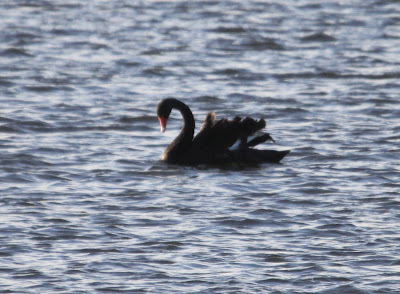 Black Swan, making me think of travels in Australia. Not an unusual sight this end of the Fleet as several now take advantage of a free feed at the Abbotsbury Swannery from time to time. 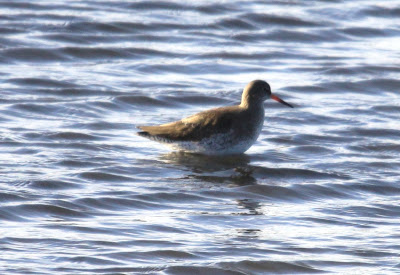 Several Redshank were among the Waders represented as were Turnstone, Knot and Dunlin. While viewing a flock of the latter I was fortunate enough to pick up the Long-billed Dowitcher, mainly by its slightly larger size and feeding action which is often described like the needle on a sewing machine. Unfortunately, or maybe not, all the birds were flushed by a dog walker the rare American bird splitting from the group, gaining great altitude and continuously calling. The Dunlin settled back in the bay known as 'The Works', while the 'yank' dropped behind the east bank of Herbury Gore, despite a search I didn't see it again! 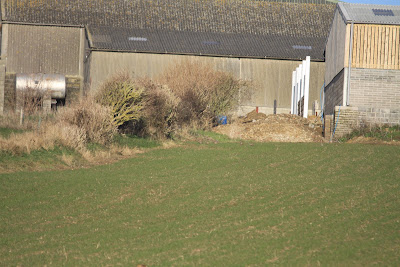 Further along, this 'covey' of at least c14 Red-legged Partridge betrayed their presence 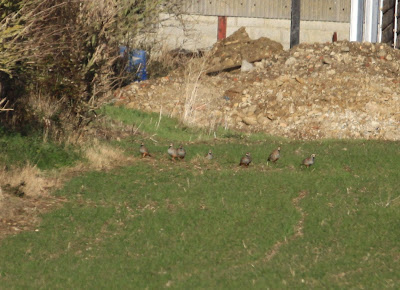 by what looked every bit like 'courtship display'. Again, these were also at a distance to preclude a decent photo, 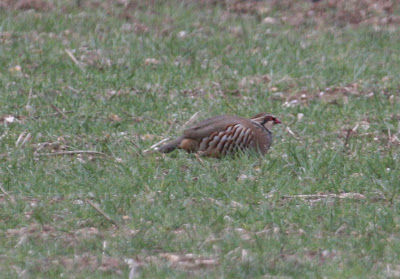 while this is the best shot I have on record. 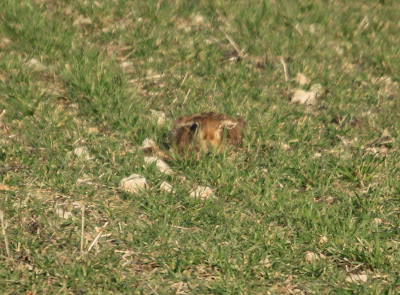 In the same field were c3 Hares, all distant and in a crouched posture, 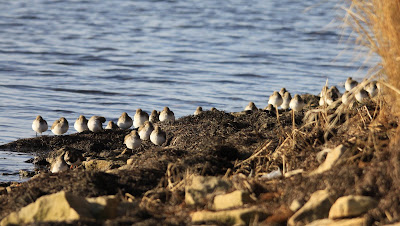 while on the adjacent bank most of the Dunlin, plus a few Turnstones, looked to be coming to roost. 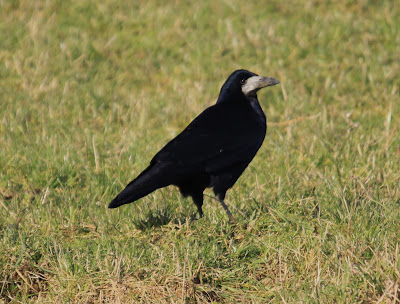 On the way from Butter Street up Fleet Road, many Rooks were feeding in the fields and as I reached the main road a bus pulled alongside and took me home - Lovely Day!
Posted by Bagsy at 17:51