Slight of Hand and Twist of Fate

On a bed of nails she makes me wait - With Or Without You from the Joshua Tree album - U2
Having visited both Radipole and Lodmoor Nature Reserves this morning, it would be easy to believed you had been in two different worlds! On the one hand, Radipole was bathed in warm early morning sunshine with most of the watercourse free of ice, while Lodmoor was bitterly cold. The transition was Weymouth sea front, fully exposed to the prevailing easterly breeze and a freezing mist rolling in out of the bay, while the further east I walked the colder it seemed to get.

There was little of note before reaching the Prom except for a small flock of about 30 Redwings overflying, the squeals of numerous Water Rails,

this group of c6 preening Black-tailed Godwit plus a single 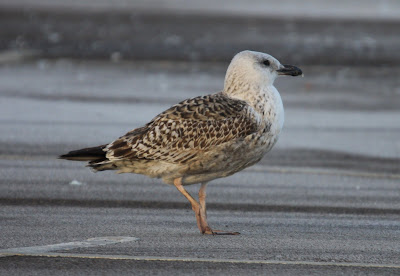 juvenile Great Black-backed Gull the only other Gull among a party of 100 or so Black-headed Gulls on the car park, and the Little Egret on Weymouth Beach was a 'first' for me there.

Meeting the icy blast I forged on as far as Greenhill where the fog was now billowing in, blocking the sea from view altogether. This reminded me of the Haar, a coastal fog that effect certain lands bordering the North Sea; the term is primarily applied in eastern Scotland, which would occasionally 'ground' our crew change helicopters when I worked in the North Sea. Through the gloom it appeared that a mob of Carrion Crows were forcing a Common Buzzard out to sea, but it seemed to keep reappearing, but as the fog started to lift c2 Buzzard seemed like they were arriving 'in off the sea'.

The Moor was, by my estimation, about 80% frozen but on one distant margin it looked like the Long-billed Dowitcher feeding, but too far to be sure. In the cold, birds seemed to be far more confiding 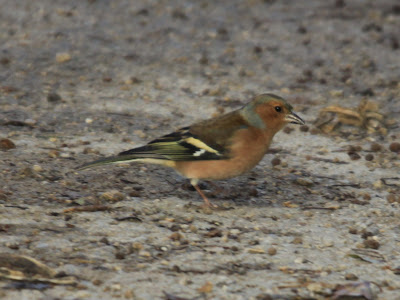 with this male Chaffinch paying scant heed to my presence, while in a Weeping Willow tree in a nearby garden, that served as both sanctuary and feeding station for a good number of passerines, there were no fewer than c6 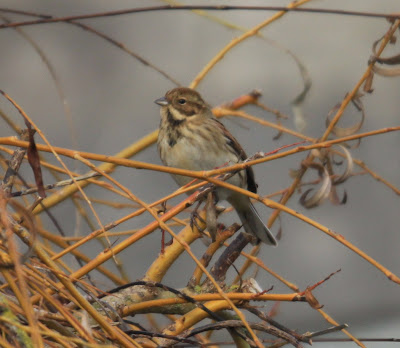 female Reed Buntings. Further along the western path a group of 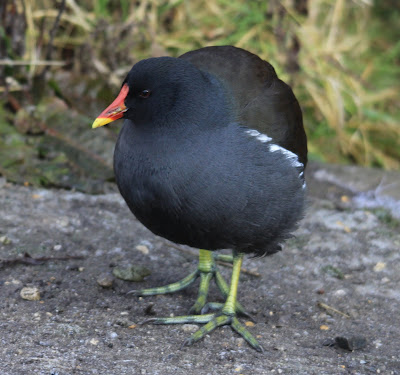 Moorhens were just about touchable, but the ever alert 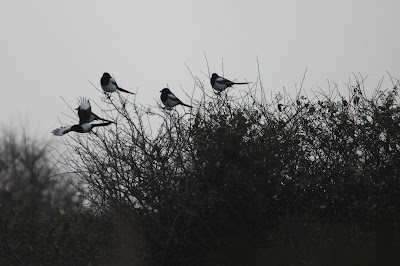 Magpies, there were c16 in this party, were having none of that! As I neared the entrance/exit to the Moor I noticed c2 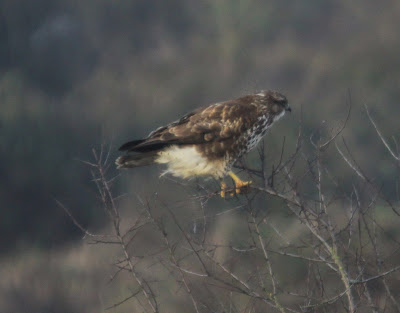 Common Buzzards sitting on separate bushes, and because of the distinctive pale colouration of this individual 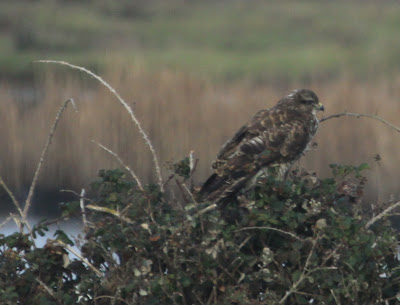 I could only assume they were those I presumed had arrived from seaward? Finally, as I headed for the bus stop and in turn Ferrybridge, 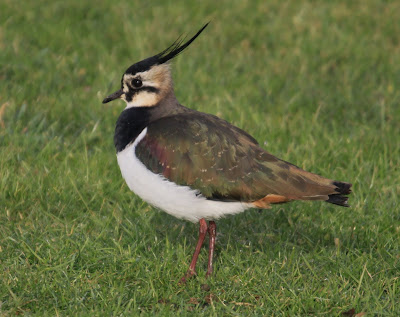 this Lapwing was so close to the road, and myself, I thought it might be catching the same bus.

One bus had not long gone by, so it was sure to be a while before the next which was a 'twist of fate' that was to prove very lucky for me. After a full 10 minutes waiting I noticed fellow 'birder' Dave Tissington hurrying towards me from the direction of Lodmoor. On arrival he told me he had just received news of Waxwings in Poole town centre, some 20 miles away, had noticed me waiting and thought I might like a lift. Kindness itself (like the vast majority of the genre) we raced back to his car and were soon underway. 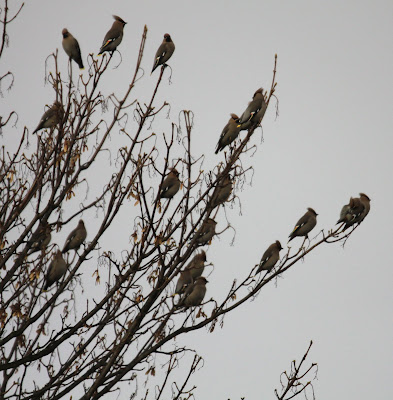 This was the sight that met our eyes when we arrived close to the Sainsbury's Supermarket in Poole, 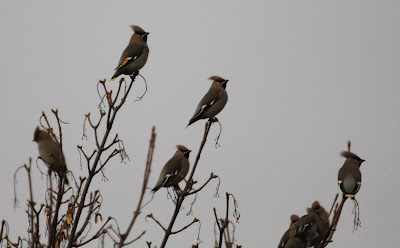 part of a flock of c47 Waxwings 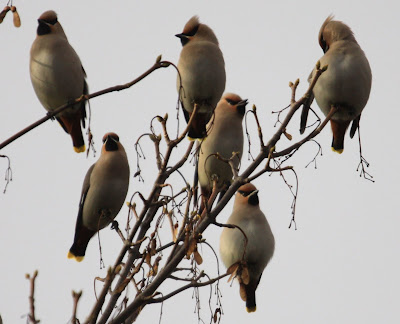 safe in the sanctuary of a tall Sycamore tree, awaiting a safe moment to dive to the smaller 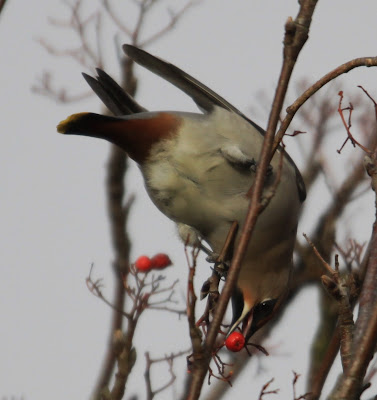 'berry laden' Rowans close by for a feed. 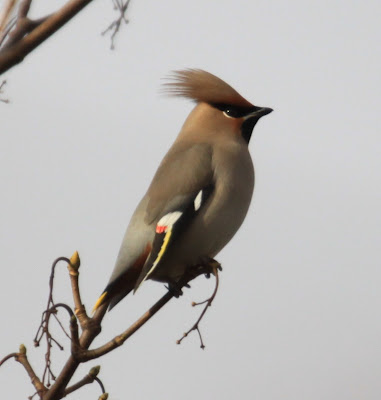 Thus far Dorset seemed to have been pretty much left out of the huge influx into Great Britain over the past few (cold) weeks, 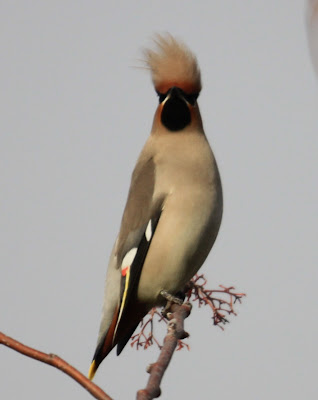 but today the balance has been redressed. 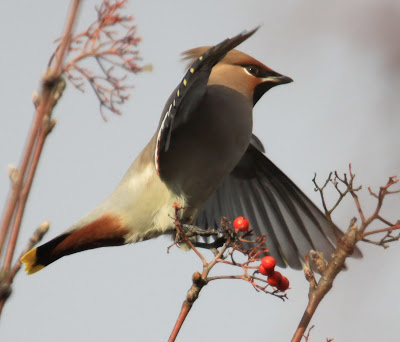 One of the all time favorites of most in the fraternity, these elegant and striking birds usually only leave their home in Northern Continental Europe when the food supply (berries) runs out. I am not alone when I say this is a moment well worth waiting for - just look at them!!!!
Finally, while talking to long time friend Mike Munroe he informed me that he uses this Blog to keep his ex-pat relations in New Zealand informed of what is going on over here. They were particularly impress, he tells me, with the 'snow scene' photos of a few days ago, so the message to all the Kiwi's is:-

Thanks for Reading the Blog, Merry Christmas & Happy New Year and please pass the link on to ALL your friends. As it stands we have 57 NZ readers already - Great!
Posted by Bagsy at 16:28