I Wish It Could Be 'Twitching' Every Day - Wizzard (slightly rearranged)

Oh, of course it is!

While it was totally predictable and expected, the only surprise was how early it started for me this year. I didn't sleep a wink last night due to my own version of Christmas Eve fervour, which each and every reader will remember from childhood as the excitement and anticipation of the arrival of Papa Noel! Even on the cusp of entering the 65th year of my existence I still get that unshakable buzz that leads to sleeplessness before embarking on a New Years Day 'Twitch'. For those unfamiliar with this pursuit, as an individual, pair or even a team you have the full 24 hours of the day selected to record as many bird species as possible in a predetermined area. There are no hard and fast rules, as cheating would be self defeating if embarking alone, but one consideration, accepted by most, is that any species (with the exception of one recorded for the first time in your life, known colloquially as 'a Lifer') may be added to the day list if seen or 'heard'. The sensibility behind this being best described citing the Common Quail, a scarce bird anyway but one that is much more often heard than seen. Usually content to sit in the dense cover of a crop field, it would be mindless for a brigade of 'Twitchers' to relentlessly disturb such a bird when its distinctive 'lick your lips' call is familiar to most. Logistics, prospects of what might be seen, decisions whether to drive down a particular Private Road to save a little time etc, etc are just some of the things that kept me awake last night, and I guess will do so again before the day arrives, but feel none the worse for it!

ZZZZZZZzzzzzzzzzzzzzzzzzzzzzzzzzzZZZZZZZZZZZ
Whoops, sorry are you still there?
The story of today's weather could be described by the single word - dank, after the heavy rain of last night partly abated leaving behind leaden skies, thick mist, little wind but a mild feel to the day. This had likely contributed to the lack of birds with the best on offer being single Mistle Thrush and Common Buzzard in / over the cemetery, a single female Goosander at North Hide, Radipole and a Great Spotted Woodpecker also on the reserve. 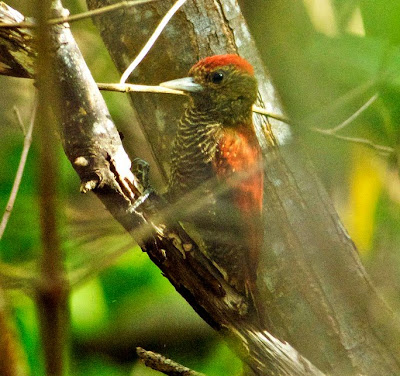 However, all was not lost as up ahead on the approach path stood a black man with a camera taking photos of what turned out to be a Robin in the Hawthorn. Taking about 3 micro seconds to strike up a conversation, it was soon discovered that Eli was of Guyanese origin but had, for many years, been a resident of Weymouth. Regular readers may remember that part of my (flexible) plans during 100 days in South America at the turn of this year, was to visit Eli's country of birth, Surname and French Guiana but due to the Christmas rush all seats on all flights were sold out. On the strength of this impending visit, there was also an indulgent yet short 'must see' list which was made up of just the 2 species pictured (not mine I hasten to add) above and below. I have to admit that this chance encounter felt rather as though the 'Mountain had come to Mohamed', as we appeared to get on like a house on fire, and also feel sure we'll meet again - I hope so! 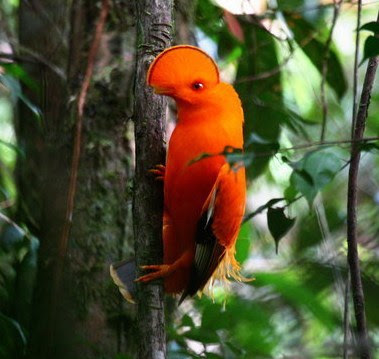 Guianan Cock-of-the-Rock
Harping back to yesterdays post and our visit to Rio de Janiero, this vibrant city was the last port of call before flying back to England from what had been a 4 countries adventure. Landing in Sao Paulo, we quickly moved on to Curitiba, Managua and Iguassu all in Brazil, before straying into Argentina for just a day to view their prospective of the 'falls'. 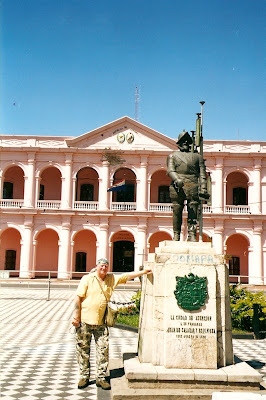 Overland to Asuncion, Paraguay where the scars of past conflicts could still be seen on the Government building in the background. 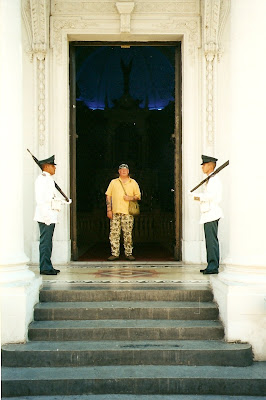 This gives the reader some idea of the atmosphere, these 'armed guards' are at the doors of the Cathedral. 21 hours on the most luxurious coach we've ever travelled on, through the vast expanse of both the Pampas and Palm Fields of Argentina, we arrived in Buenos Aires (Beautiful Air) 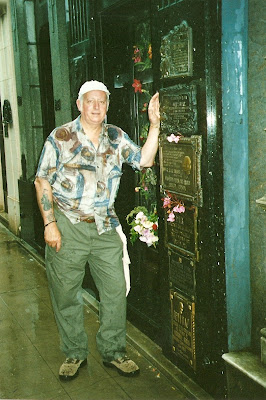 A visit to Eva Peron's grave is a 'must' here 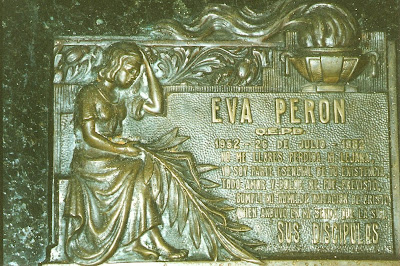 despite the fact that many of the 'elite' of the city would even now like to see here remains removed from this cemetery, where money alone cannot reserve you a place. 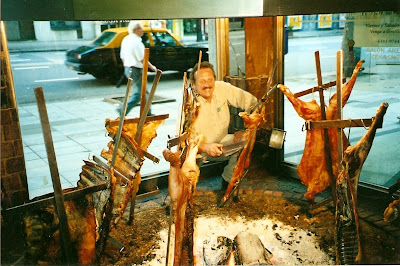 Dining is the number one treat in this, one of the most vibrant, beautiful and exciting cities I've personally had the pleasure of visiting. Here Myqueues is selecting the cut of meat he intends to savour this evening. 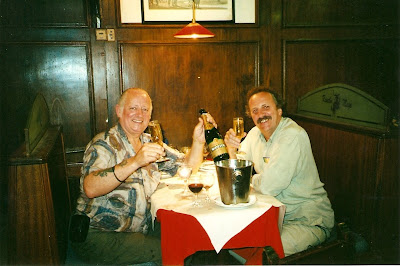 Eating at 20-30 is, by local standards, very early but still two hours later we had only just finished a main course. That was when in the most polite way we were asked to move table to allow them to accommodated a large group. We had no problem with that, and soon after settling at our new table where given a bottle of Champagne! They know how to do things in BA.

2 or 3 days were spent in the city and similarly in the unique Costanera Sur Nature Reserve, which is the buffer between the conurbation and the River Plate (an area not to missed by anyone remotely interested in birds) before 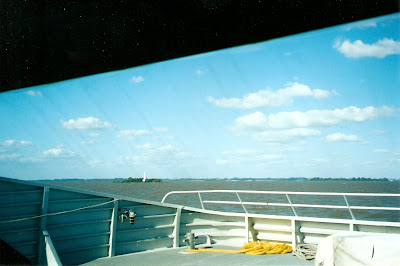 catching the hydrofoil across Rio de la Plata to 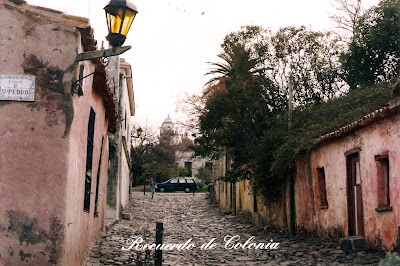 the ancient small town of Colonia in Uruguay. Each evening a parade of dozens of old cars would drive these cobbled streets putting on quite a show. 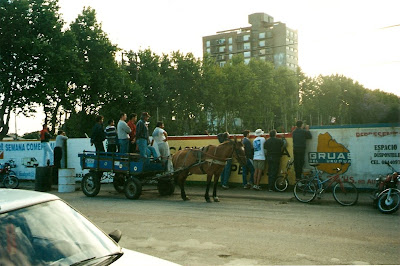 Like most inhabitants of South America, their second religion is football and it was soon noticed that the townsfolk here were not going to be deterred by the lack of a ticket! 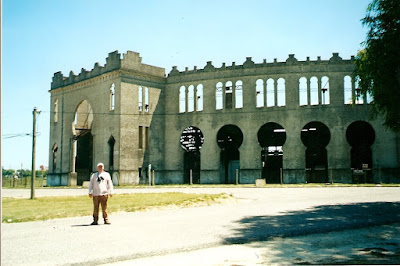 They have (in my view quite rightly) forsaken bull-fighting here, the 'ring' now laying abandoned 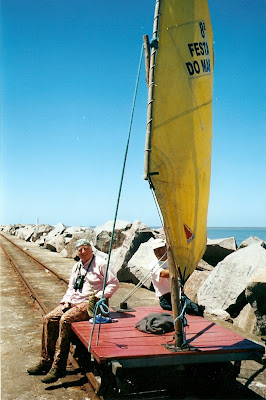 and this too was a unique experience. This is a 'Sail Rail' which runs the length of the pier and with no official staff to run it you simply climb aboard and sail off into the sunset. We then journeyed up the coast via Montevideo, crossing the border back into Brazil at Pelotas, through the lake-lands of Rio Grande do Sol, Porto Alegro and finally back to Rio.

If you're reading this 'Shaver My Lad', let's do it (or similar) again soon. Happy New Year to you and Jan
Posted by Bagsy at 16:52